The Great Derby of Silesia
Ruch Chorzów 3-0 Górnik Zabrze (18:03:11)
Making his debut for EFW today with some splendid photos and a short story from the Silesia derby in Poland is Radosław Rzeźnikiewicz....

I'm pretty sure there's not much you don't already know about the big derby game that took place here in Poland last week, but let me remind you anyway. It's called "The Great Derby of Silesia", and is played out between two teams with a great tradition, namely Ruch Chorzow and Gornik Zabre.

As you'll know, Silesia is an industrial part of Poland similar to the Ruhr District in Germany, so this game was kind of similar to a Schalke v BVB clash, but who cares about that game?

The biggest stadium in Chorzow (our former national stadium) is now under heavy construction so the game was played at the home of Ruch Chorzow - a pretty standard Polish ground. The capacity is around 13,000 and the game was sold out, of course. There was only one serious problem....the weather. There was a heavy snowfall on the day of the game, but this is Poland, we went ahead and played it anyway. I don't normally mind, but I was in the ground two hours before kick off. And what were those cheerleaders thinking of.... 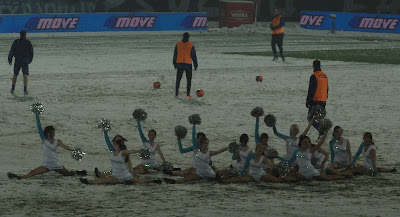 The girls cool themselves down before the big game. 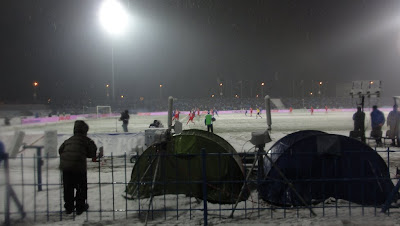 There were also some other people not complaining about the weather. These tramps didn't seem too bothered.
Because of the snow, this was the longest game of football I've ever seen. It took almost three hours to complete from the kick off to the final whistle. There was a snow delay at the start of the game, and the half time break lasted around half an hour. There was also another break the game, and this is the one that really needs a mention; after 48 minutes of a very dull game, and with both sets of supporters - there were 500 away fans - frustrated, something unexpected happened. First up, a giant flag appeared in one of the stands. This coincided with a power failure.... 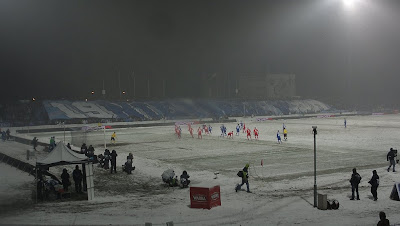 Due to the darkness, some fans tried to find some lights in their pockets to bring out. It just so happened, they'd remembered their flares... 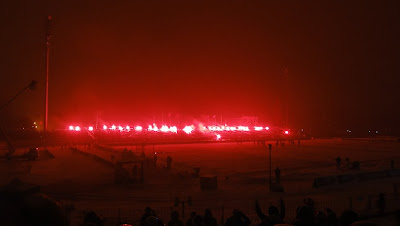 The reaction time between the floodlights failing and the flares appearing was less than a second. But this wasn't fixed by the club and the fans of course. Blink, blink.

There is a film HERE of the whole event unfolding. The most interesting part is after 1 minute and 10 seconds.

The break was really helpful to the home team. Ten minutes after the light miraculously reappeared, they raced to a three-nil lead. 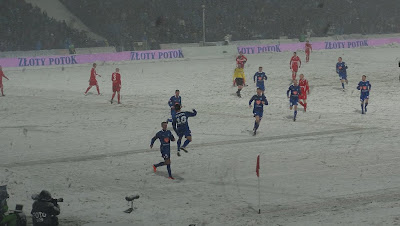 There were no more goals, but there were certainly some more flares.... 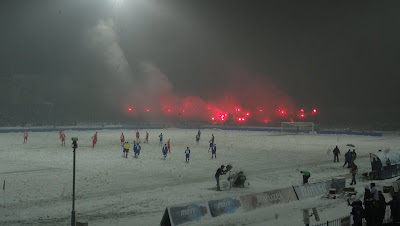 The home fans also found time to set the Gornik scarves and flags on fire. As you do... 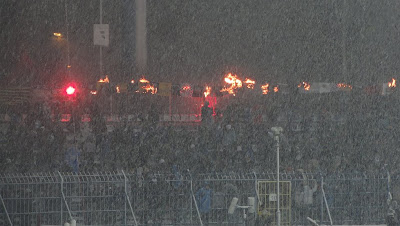 OK, let's finish this short and boring story with a couple of more photos... 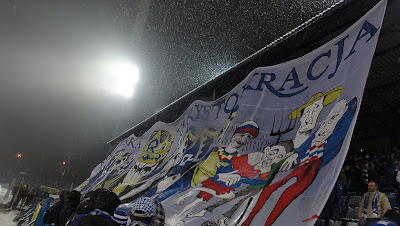 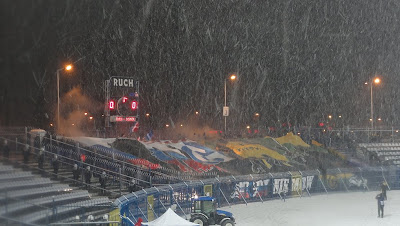 And here's the 500 away fans.
Love and kisses to all you lads. Stay Brutal. Radish.
Woof! There you go, that'll be Radish for you. I think we'll be inviting him back to EFW don't you? If you want to read more about his footballing travels then head to Kartofliska. They're the Polish partners of EFW.
- Feel free to comment below -
Posted by Danny Last at 12:10

And by a happy coincidence, this piece appears on the Football Ramble website today written by our pal Michał Zachodny - whom you can follow on Twitter at @PolishScout - about floodlight failures in Polish football:

You might also be interested in a preview I did of the game with a little history behind the rivalry.

That is ridiculous .. how can a club avoid punishment over a so-blatantly co-ordinated sabotage of an ongoing football match?!

Not complaining like, I love it, just saying .. absolutely ridiculous!

This was a coincident. Due to the snow on wires, the light went off. Proven by the electricity company.