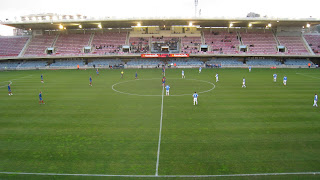 So onto my third match in 22 hours. After Barcelona v Real Mallorca and Gava v Valencia it was time for another match in the Segunda Division B - Group 3. This match took place in the Mini Estadi, which is next door the Camp Nou and was opened in 1982. It's not often a reserve team play in a stadium that holds around 16,000 but then this is Barcelona.

For this match however, with it being Christmas and it turning a bit cold. The notoriously fickle Spanish fans didn't show up. As I was virtually on my own in the stadium, I decided to do a sort of minute by minute report by way of a change. So here goes:

1 min: Barca anthem ends. Remember to do the three hand clap bit at the right time. We are underway.

14 mins: Not much occurring on the pitch but notice Barca manager Josep Guardiola is sitting not far from me.

23 mins: Don't mind telling you I had a cheeky touch of the ball. Very pleasing.

25 mins: Wonder if I appeared on Barca TV with my well placed throw to the corner taker.

28 mins: Benidorm forward whack ball towards goal from two yards. Keeper makes Gordon Banks type save (or did it deflect of a defender!?) and the ball smacks the underside of the bar and stays out. Crowd stunned.

33 mins: Take nice photo of the action from behind the goal. Pleased. 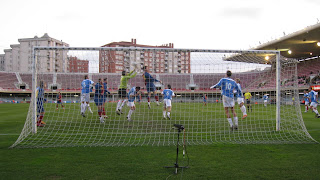 37 mins: News of Real Madrid taking the lead against Villareal filters through on stadium scoreboard. Man next to me shakes head.

38 mins: GOAL! Maric curls in the opening goal and it was a beauty. He runs off doing a hugely disappointing Nicholas Anelka 'butterfly hands' goal celebration. Man next to me nods his approval and punches the air. 1-0.

43 mins: Fourth bit of nice skills by the Barca No.11. The locals are used to it but I stare on open mouthed. 11 Euros to get in AND bits of skill!? What's not to like!? 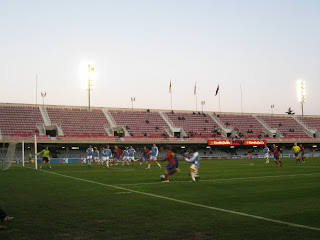 I crack and purchase some Barca crisps. Wallet a shade lighter. Also notice that there are no hand dryers in the toilets. This makes a change from the norm in Spain which is 1 x 1960's hand dryer, 1 x out of order sign. 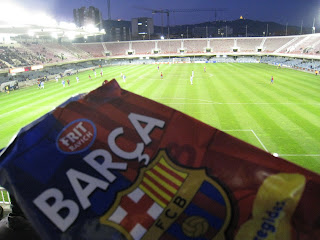 65 mins: Perform 'players wearing gloves' headcount. Aside from the keepers only one player has them on. Barcelona No.8 - shame on you!

66 mins: Wish I was wearing gloves.

FULL TIME - the Barca anthem pumps out once more and (yet again) the Barca fans go home to celebrate another win.

I leave and head back to the wife and our friends for more drinks. The next day we took in all the sights, ate and drank to excess. However, you don't want to read about that here. You can view all that at www.boredofmyholidaystories.com (probably). 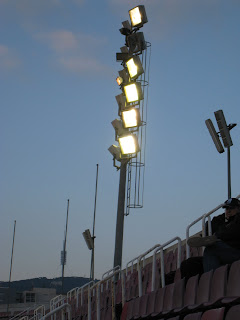 Had to have one of the floodies before I left eh lads!?