This just in: Santander is brilliant. Want to know why? Then pull up a chair, and I'll try and explain.
Our belly is never far away from our thoughts here at EFW so it was pleasing to discover that the locals in Cantabria take their food very seriously. If you want beer as well, then that's cheap and plentiful, and what's not to like about a stadium that's just a goal kick away from a perfect sandy beach on one side, and surrounded by scenic mountains on the other?
Pretty much every bus heading east on a matchday will take you to the El Sardinero football ground, but why do that when - on a nice day - the alternative is a walk along those beaches having a couple of beers here and a few tapas there? (nope, got me there - Ed.).
Before we got some sand in our toes, we stopped off in Plaza Pombo whereby several hundred Racing fans were kicking off their day by exchanging football stickers. This is common Sunday practice in many Spanish towns. I wish it had been a regular occurrence in Lancing, West Sussex around the beginning of the 80's when I was after completing my Panini album. Spanish football expert Sid Lowe has written more on this fine art. Go and check it out. 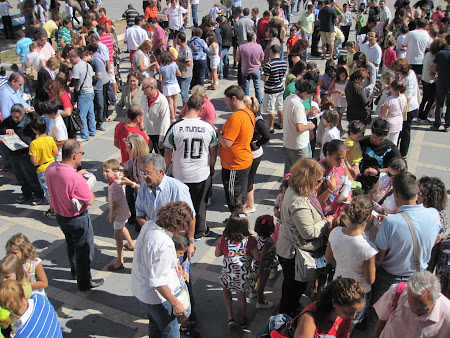 Got any swaps? Football stickers are exchanged in the Plaza Pombo.
Back onto the beach then for some pre-match food. Burgers and chips for around a tenner right? Wrong. Fresh seafood for us. Cheap as well. And here's a tip: fancy a small beer in Santander, then ask for a caña. And if it's a lovely, big cold beer you're after, then ask for a cañon. So, altogether now: Dos cañons por favor. Just to make sure, do that 'big glass' gesture with your hands, the one you learnt to good effect in Prague.
Racing Santander had been kind enough to offer EFW a press pass. This being Spain however, it took me the best part of an hour to pick it up. Spain is an unbelievable country, but when it comes to any sort of bureaucracy, then be prepared to be very patient. Luckily, I was stood next to a six-foot cow opposite a giant spaceship in the queue, so that past the time nicely. Turns out his [the cow] name is Tula - the club mascot, and that [spaceship] is their equivalent of Wembley Arena - only six times more architecturally pleasing on the eye. 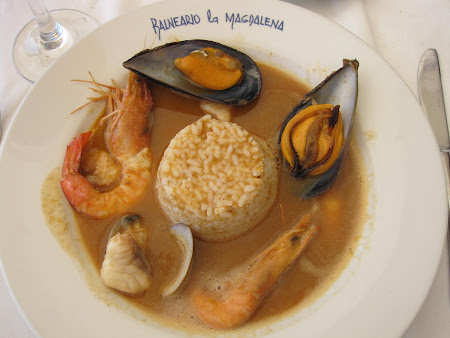 It's not often a pre-match meal makes it into the photo section, but this is Cantabria. And a starter at that. 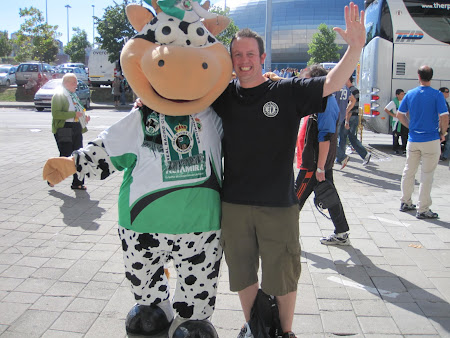 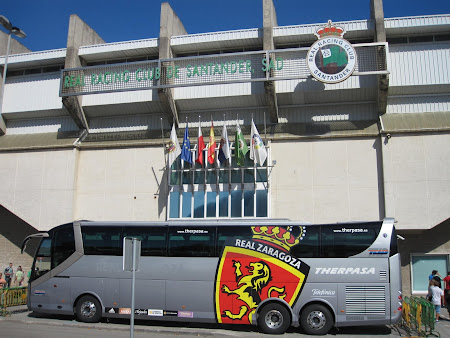 Real Zaragoza announce their tactical plan early on.
Just over 13,000 had pitched up for this, the fourth game of the La Liga season. There was only around 50 odd Real Zaragoza fans there. With very few exceptions, away fans just don't bother to travel in this league. The home fans stuck up with a hearty rendition of 'Feunte de Cacho' (Fountain of Cacho) - a song about a brunette telling you where to drink water at 2am - and we were away.
Imediately, it became clear that Racing's preferred formation at home was the old 4-4-1-1 whilst opposing coach Jose Gay had opted for a 4-2-3-1. My thoughts turned to inverted pyramids. Actually, did they 'eck as like. I read about those formations in Marca before the game, so Zonal Marking and Johnathan Wilson can sleep tight.
My thoughts actually turned to beer. Inside the stadium only beer sin (without alcohol) is advertsied. I had a little word though. Turns out you need to do a nod a wink to the bartender, and then out comes the proper stuff, poured into a big tumbler. Who knew?
There is nothing a Spanish referee likes more than to dish out a few yellow cards. Splendidly, the man in the middle for this match was called Jose Louis Gonzalez Gonzalez. Gonzalez Gonzalez was licking his lips as early as the 5th minute when home skipper Munitis tried to take out Leo Franco in the Zaragoza goal. It was to be the start of a very strange afternoon for Gonzalez Gonzalez (no apologies for heavy repetition of his name). He later to a fancy to disallowing perfectly good goals. One for each side as it happened. 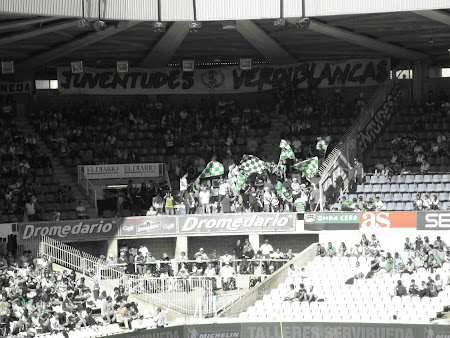 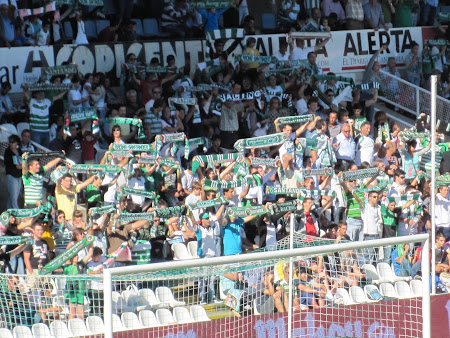 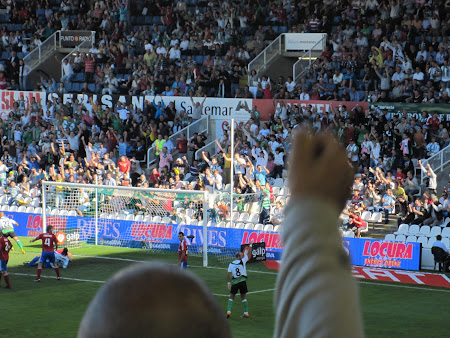 Gol, gol, gooooool? Not if Gonzalez Gonzalez has his way. Offside mate. Or a foul. Take your pick.
Manuel Arana was at the heart of everything Los Verdiblancos had to offer. After Racing had taken the lead, I struck up a conversation with a chap called Antonio in the ground. He'd been coming here for 30 years. As such his season ticket was discounted by 35% to around €500 (individual match tickets at Racing Santander cost between €30-€60). Just as we were singing his praises, Arana produced another bit of exquisite skill to set up the second goal and that was that. 2-0 and frantic nodding and high fives all round.
Arana will inevitably end up at Real Madrid. They hoover up all of Racing Santander's talent. Gento, Amavisca, Helguara, Munitis and more recently Canales have all gone to the Bernabeu. Usually, whenever Real Madrid have won the European Cup, an ex-Racing player has been an integral part of their team. I was hoping to catch Canales the week before in the Bernabeu, but there he wasn't. He's signed up for five minute substitute appearances there instead of being the linchpin of another side.
After the game I joined the locals in La Tasca, the bar that is attached to the ground. The fans told me of crazy games against Athletic Bilbao whereby - not too long ago - 5-6000 away supporters would go to both matches. Crowd trouble, and politics put a stop to that though and nowadays just a few hundred brave souls travel. Also, they were quick to point out that Racing are innovators; the first team to be broadcast live on Spanish television, to have a shirt sponsor, sign a foriegn player, and to play in an overseas tournament - in Paris in 1933 I'll have you know.
With all that information stored and the words to 'Feunte de Cacho' embedded in my memory forever, I stepped across the road to rejoin my wife for a walk along the prom. Life's a beach sometimes eh? 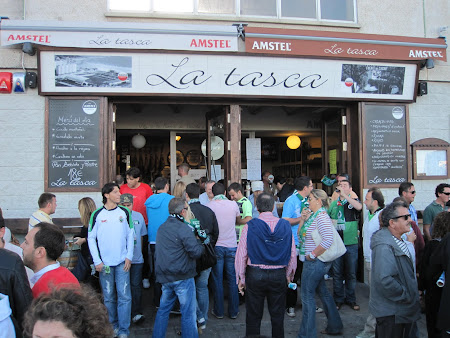 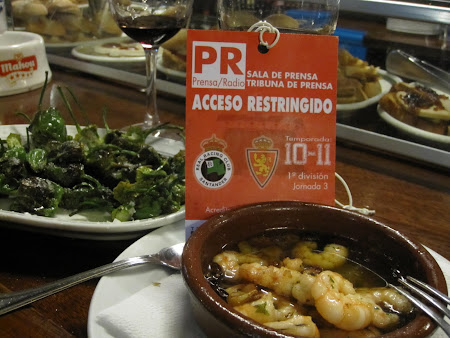 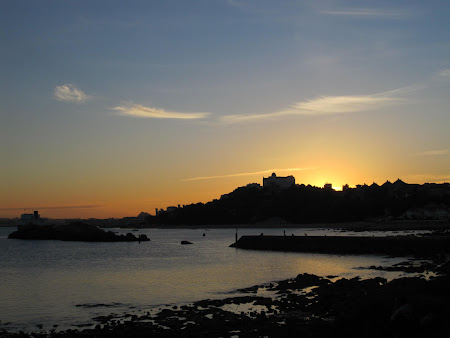 Good to see that the Non League bag has also made the transition into the big time...

That's not the NLB. That doesn't travel abroad - far too valuable, and nobody will dare insure it.

I was about to look into nonleaguebag insurance for therealfacup's trip to Spain in 2 weeks. Thanks for the tip, I shall leave it at home and invest in a Segunda Sac.

I suppose I won't find such culinary delights next door to the Teresa Rivero?

Damon, not so far away from Teresa Rivero you'll find a good bulgarian restaurant (Taberna Bulgara, Pena Prieta Av, 82). It's not as good as spanish food, but it's ok. Anyway, Teresa Rivero is 20 minutes by subway from the heart of Madrid's central old town, where you'll also be able to find wonderful dishes.

Greetings to everybody and Aupa Racing!!!!