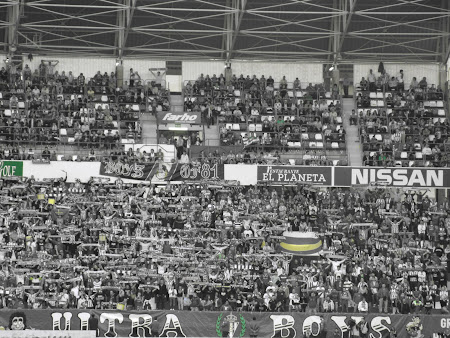 Cider with Rojiblancos
Sporting Gijon 0-2 Valencia (25:09:10)
I've been in like with Sporting Gijon for years. Primarily, they reeled me in with their name (he-hon) which I take great delight in saying, and in recent years they've won me over with their fans - the best in Spain. They're one of the very few clubs in La Liga whose supporters travel in huge numbers to away games, and sing vociferously for 90 minutes.
To get myself in with the Rojiblancos, I introduced myself on the clubs fan forum a few weeks before this match with Valencia. After an initiation ceremony - in which I was asked my views on bullfighting, and more importantly if I preferred my Spanish tortilla with or without onion - I was made very welcome. Juan - a fan of 30 years - was to take me under his wing and be my guide for the weekend.
The region of Asturias is legendary for its food, and with good reason. The portions are enormous, but that doesn't detract from the quality. After arriving in town, my wife and I pitched up at El Pozu L'Arena - a local Sideria (ciderhouse) for miners, and a place so good it was to bookend our weekend in Gijon. We had a four course meal in here for €12 which included every culinary delight you could dream of, and free wine. Woof.
Juan had invited EFW to Bar Texas near to the El Molinon stadium a couple of hours before the game. The atmosphere is explosive around the ground on match days, and you won't go far wrong in any of the bars - all of which have Sporting Gijon memorabilia adorning the walls, and I love that. After learning a few mandatory new phrases; Puxa Sporting, Puta Oviedo and aerbitro mamon (Up Sporting, Bitch [Real] Oviedo and the referee is a w@nker) we were flying.
It was a relief to be in the pub at all to be honest. Hours earlier I'd found myself locked in the stadium - the oldest Spain. I can think of worse places I suppose. As my hotel was just around the corner, I thought I'd try and find a 'magic door' for the standard EFW on the pitch snap. I found it without any problems, eased myself onto the pitch, and got one of the television crew to take the photo. Job done, and feeling quite chuffed, I went to get out again only to find the same door had been locked. Twenty minutes of feeling slightly sheepish followed until eventually, a bemused security guard set me free. And relax. 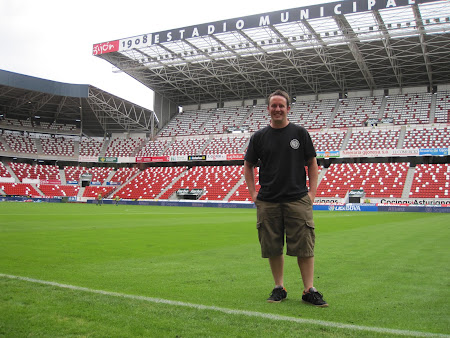 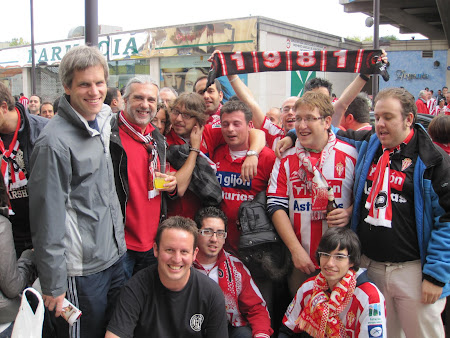 Pre-match outside Bar Texas with my new pals.
Valencia CF have arrived to the crease this season having to bat away a much publicised mountain of debt, the loss of their best players Villa and Silva, and a new stadium that's ground to a halt halfway through the building process. In the face of all that adversity, they've started this season like a team on fire, which is fairly apt, as they love a fire in Valencia.
Fans of novelty items in football grounds would have rejoiced as the two teams took to the pitch through two enormous inflatable bottles of cider. Ah, cider, more of that later.
And so to the game itself. It was total football from La 'naranja mecanica' (clockwork orange) early on. Topal opened the scoring in the 6th minute with the 100th goal of this La Liga season -he said casually throwing in a very impressive statistic - and three minutes later Soldado added Valencia's second, and his first league goal for the club, he said adding another.
I couldn't help but notice a chap behind me in the crowd. He'd been on his feet the whole game giving frightful abuse to everybody. Juan giggled and told me his nickname is Pechu (the chest), and he's famous in these parts. If you're ever within a country mile of the Grada Norte on a match day, you won't fail to notice him, and learn a few hundred new swear words in the process. 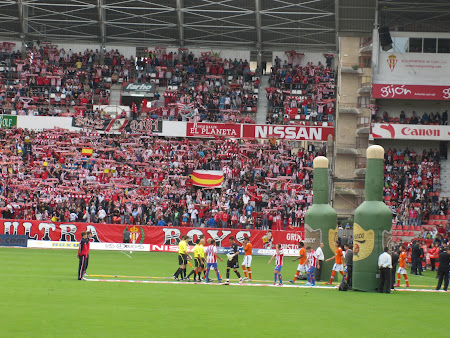 The two sides emerge through the cider bottles - as you do. 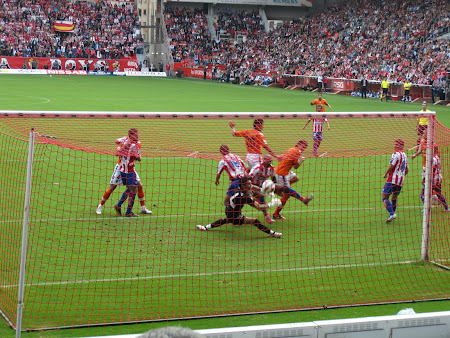 Topal scores La Liga's 100th goal of the season, and I will surely collect a prize of some-sort for taking this award winning (?) photo. 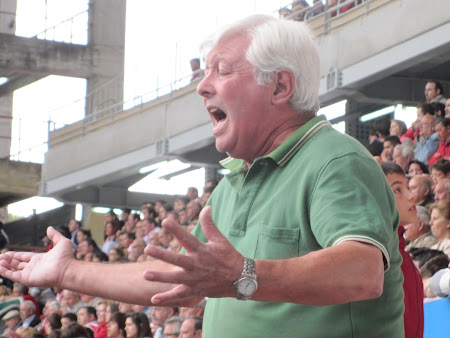 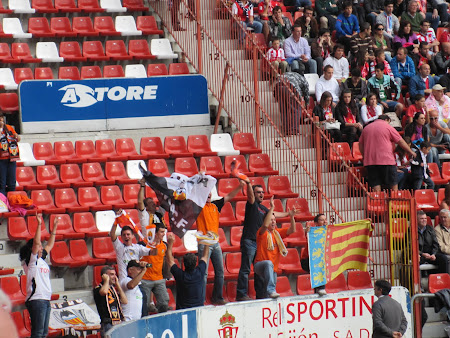 The Valencia fans were loving it though. All 20 of them.
Roared on by the home support - even at two goals down and being slightly outclassed - Sporting Gijon fought back like caged tigers in the second half, but to no avail. Diego Castro caught my eye for the home side. A player in the mould of Paolo Di Canio, and one I'd pay to watch every week. For Valencia, it was all about Manuel Fernandez. The Portuguese international - who has had a couple of brief spells on loan at Everton - was immense.
Valencia's support was pitiful. Twenty fans for a club of that size is pathetic. I don't care how many excuses you want to come up with, I simply couldn't believe they would bring so few fans. Lewes FC take more than that to away games, well sometimes. Anyway, at the end of the game, Juan and his friends made a beeline for those fans that had made the journey. A bit harsh having a pop I thought, but I needn't have worried. They simply shook their hands and wished them luck.
Fair play to those Valencia fans that did travel though. They had the time of their young lives, and looked to have been on the local sidra (cider) all afternoon. Well, when in Gijon as they say.
As well as its food, Asturias is renowned for it's scrumpy-like cider, a small bit of which is poured from a great height into a large, finely-blown glass. to be drunk straight away, before it loses its 'fizz'. In other words its a recipe for getting snot-flying drunk in a very short space of time. At €2 for a large bottle, its cheap and very moreish. As usual here at EFW, we couldn't help ourselves, and we spent a very long night drinking cider with the Rojiblancos. A perfect night. 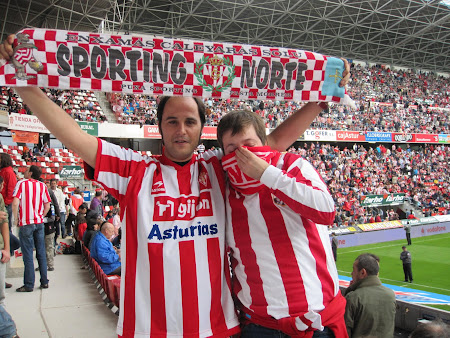 The EFW guides for the weekend. Cheers lads. 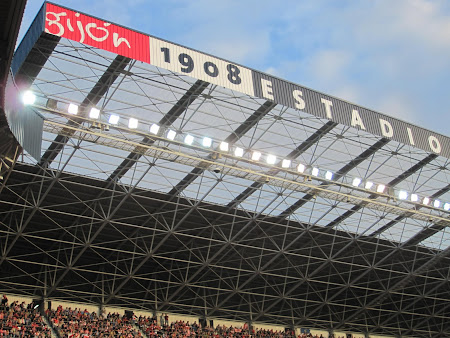 And if you know your history. They've been playing here since 1908. 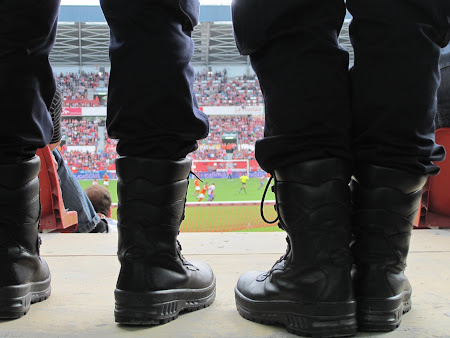 Bootiful. The local police watch on in their fancy footwear. 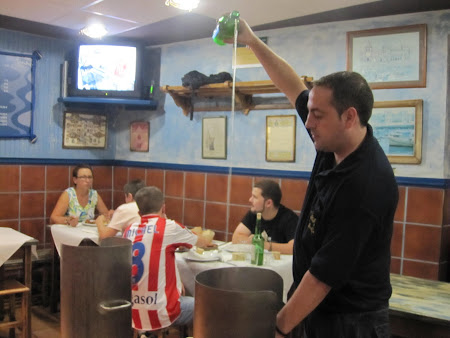 Don't mess with tradition. Cider poured from a height. And then downed in one. Refreshing.
Sporting Gijon are a very different club in terms of Spanish support. They like to think of themselves in terms of a Liverpool. I'll go with a West Ham. Tremendous, vocal fans that regard themselves as a tight-knit family.
Next up for Juan and co. was a trip to Zaragoza. Over 20 supporters groups were organising travel, and over 2000 fans were expected to make the trip. Bad results and performances have no affect on the loyalty of Spain's best fans - the Gijonesas. If you're thinking of travelling with them to an away game, then mark down the visit to Deportivo La Coruna in your notebooks. They take up to 9,000 fans to that game. We're up for it if you are? Adios. 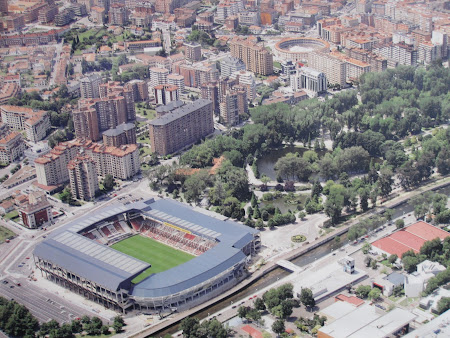 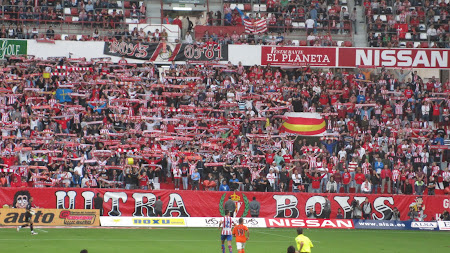 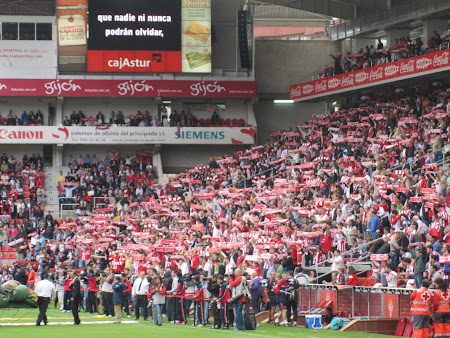 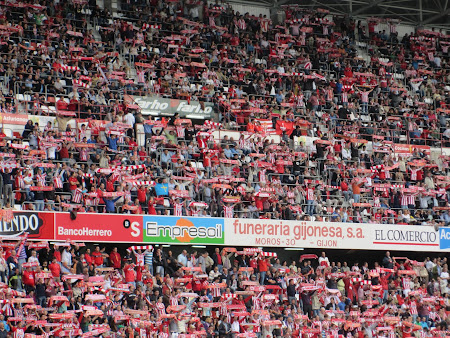 top class as always Danny. and yeah, slightly bemused by the number of away fans.

Cheers Arun - much appreciated. Valencia get 55,000 at home matches, you think just a few more would have bothered to travel.

Spanish Tortilla with onion, of course :=)

Would the Premier Lge even allow 9000 away fans at a game?

Sid Lowe won't be happy with this...

@Adam - Sid Lowe's name cropped up quite a bit in the pub before and after the match. There'll be a lot more about him in the EFW report on Sporting Gijon B v Real Oviedo on these pages tomorrow.

fantastic blog, i will see you frecuently.

Interesting read Danny but one reason why there was so few away fans is that Sporting Gijon's supporters have one of the worst reputations in Spain for hooliganism.

What you correctly point out was passion can easily change to something more intimidating.

Did hooliganism not crop up in your research/following of Heehon? Surely if you've ready Sid Lowe or Phil Ball it's something they have referred to often.

@Nic - Ah, interesting. In the run up to the Real Oviedo game the next day (v Sporting B), the local press were having a few kittens about the problems that may occur. As it was, nothing untoward happened. Maybe that 'reputation' that you read about is a thing of the past?

what will happen next?we ll see.

Gijon have some great fans, when we (Birmingham) hosted a friendly against Sporting last August, they brought at least 50 fans with them, sung throughout and even joined in with a chorus of 'Shit on the v*lla!'

They were out in force before and after the match too, enjoying a tipple in the brummie sunshine!