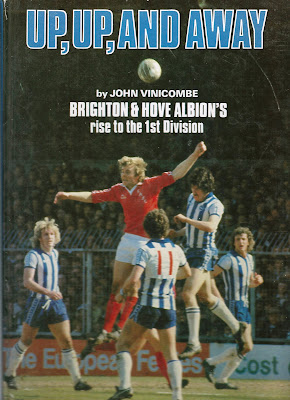 Up, Up, and Away
Larry from Lancing sums up the emotions of many a Brighton and Hove Albion fan as another new dawn beckons...
Sporting life sometimes, just sometimes, transcends reality. “You couldn’t make it up...” screams the castrato commentator. In 1986, and having served a 63 day ban for smoking marijuana, Ian Terrence Botham returned to the England fold against New Zealand. Derided as a drug addled shadow of his former glorious self, his first delivery back saw Bruce Edgar dab a lifting delivery to Gooch at second slip and I.T Botham equalled D. K. Lillee's record of 355 Test wickets. The ever pragmatic Gooch enquired “Who writes your scripts Beefy?” Some sportsmen (and of course women) and some sporting institutions have that certain something that you just couldn’t make up, who indeed writes their scripts. There are many more examples and you know what, I think we may be just about to experience another one...
As those twin evils of gluttony and greed brought down the curtain on the crumbling Goldstone the reality of what lay ahead was only all too clear. Or, so we thought. What followed has been a schizophrenic journey between football grounds in different counties, up and down leagues, play off drama, managerial comings and goings, joy and despondency, campaigns and confusion, politics and pop. The chapter is drawing to a close with a dream new home on the horizon, a charismatic and inspirational manager, a Chairman with the blood of the club in his veins and a team playing a style of successful football as good as anyone can remember. Brighton & Hove Albion, who writes your scripts?
Let’s not forget that some went to prison for this story to come true, people with families and responsibilities put their freedom on the line, people put their lives on hold to fight for a future and many, many more did what they do best – stick by their heritage. Sounds dramatic, it was. A script writer needs heroes and a supporting cast, Brighton has these in abundance. This one as they say is for you.
We can now say that 26 April 1997 was not the end. Yes, we’ve had a base in Brighton, we haven’t though had a home and a club and its fans need a home. 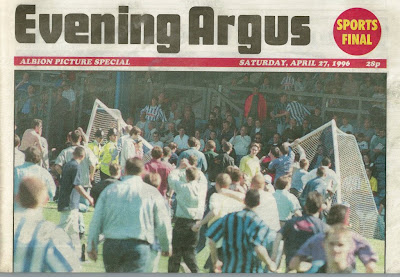 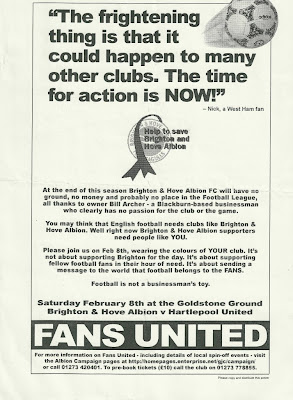 Football belongs to the FANS
Most fans enter their new era in a new stadium reluctantly, moving to identikit stadia in the middle of nowhere, leaving behind an atmospheric ramshackle ground full of history and ghosts. We have had more than enough time to mourn what was unceremoniously taken away, more than enough time on the A23, M25, M26, M2, more than enough time getting soaked in a wobbling mass of green plastic and steel. Like any good story, the twists and turns and dramatic developments have added to the anticipation. Those who have sweated to make the stadium a reality have left no stone unturned in their quest for perfection, striking a balance between a state of the art modern stadium and the commercialism that accompanies this, with the history and heritage of a club and its fans.
As the goal posts fell in 1996 and as the turf was lifted in 1997, who would have scripted what was to follow? In that time we’ve seen some of the worst professional football ever played on these shores, Donny Rovers of course take their share of the blame for that game, and we’ve seen some of the best. We’ve had the worst of times and it feels like we are now approaching the best of times. 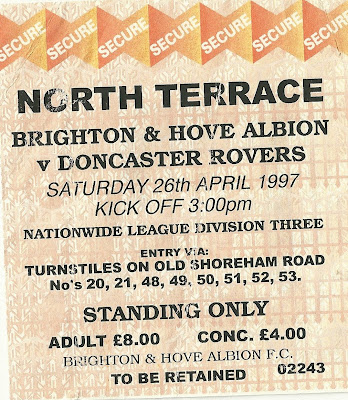 The last ever game at the Goldstone Ground
Like this? Larry has also written on the Brighton v Crystal Palace rivalry.
- Feel free to comment below -
Posted by Danny Last at 11:23

Email ThisBlogThis!Share to TwitterShare to FacebookShare to Pinterest
Labels: Brighton and Hove Albion

Great article. I can fully understand your excitement as the day approaches, I've lived in the States for nearly 20 years but I was nearly ever present at the Goldstone through the 70's and early 80's and think of it often. I liked you emphasis on the amount of work and the sacrifices made by so many, and know there won't be a dry eye in the house at the AMEX in August.
Andrew in Maine, USA