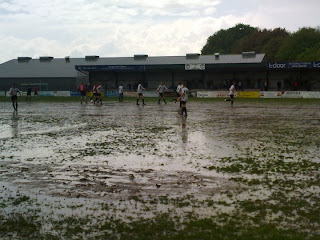 I didn't think I'd be writing up an article on the 4th Provincial Division in Belgium today but when a story falls into your lap, one is inclined to well - lap it up. RWD Molenbeek died as a club in 2002 when they merged with KFC Strombeek to form FC Brussels. They're back back back though and the name RWDM lives on with a small but loyal following in the nether regions of the Belgian football pyramid.

The 4th Division in Belgium is split into nine sections. RWDM now play in the Brabant Province version. That's how far they've fallen, but at least this season they've picked up 31 points so far, with two games left. Now then, what about this particular match and that pitch. Well, I'll let Stephane Lievens take up the story:
Asse-Zellik are the "biggest" club in the division. They have played as high as the 1st Provincial division 5 years ago, but due to lack of money (as always), they've fallen on hard times recently. They are the only team of the division with some kind of "stadium", well a ground with one stand, a big club house and some terraces that is. On Sunday, they had to win and wait for other results to go their way to be champions of the division, which eventually happened as they beat us 5-2and results elsewhere went their way. 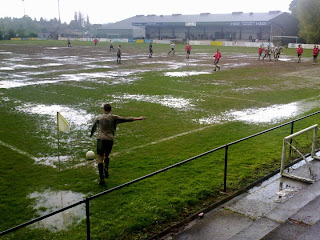 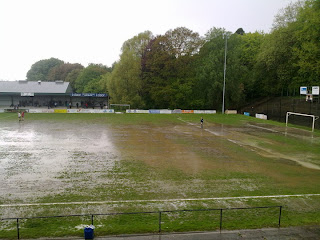 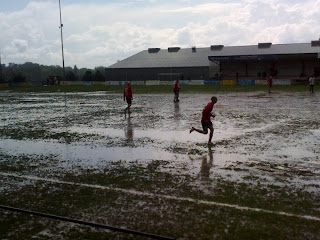 Them winning was a good thing for us because beer was free after the game in the club house (I literally had to flee 2 hours after game, god knows what state I would have go home if I had stayed much longer...). Asse is a town of 30,000 about 15km from Brussels. The local side SV Asse merged in 2002 with neighbours Zellik Sport to form FC Asse-Zellik 2002.

As for this match, when we arrived, it was not raining but you could see that the pitch was already in a bad condition. Then after about 15 minutes, it started to rain very heavily for about 30-45 minutes, the pitch rapidly became some kind of swimming pool. At no point did the ref think about calling it off.

We were also certain that it would last until the end whatever because of the hard winter we've had, there has been a lot of postponed matches already and the season is now running two weeks late. The FA really can't "afford" to postpone anymore matches if they want to complete the season (as in the lower leagues, there are also play-offs due to be played, which are also lasting two weeks or so). After half-time, the rain stopped but the playing conditions didn't improve much.

So this match not only lasted the full 90 minutes, they dished out free beer afterwards. I'm not one to have kittens easily here at EFW HQ but how much fun can one have on a rainy Belgian afternoon? If you've ever seen a match take place on a pitch in worse condition than this then please let us know. 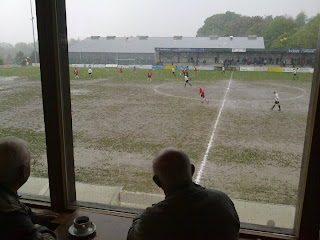 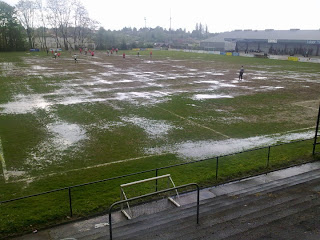 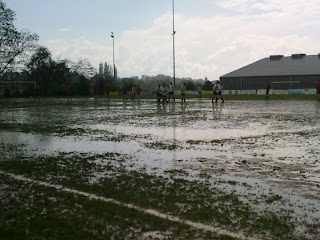 Not much point in keeping the ball on the deck, was there?
Unless you were on a ship.

more like a swimming pool than a football pitch

have seen less water in a swimming pool.the pitch was more suitable for water polo than football

Danny, that is a good pitch for Belgium, there is actually some grass on it !! The last pitch I played on in Brussels had no grass ,and you had a constant fear of standing still as the ground started to give way under your feet!!
Andy Day

I used to play on pitches like this when I was a kid!

did the digital camera happen to have a video mode by chance...
would love to see a videoclip even if it was crappy quality.

Unfortunately, I didn't film it, I only took photos with my mobile phone. I should have...
RWDM Forever
www.rwdm.net

Great article.. Reminds me of the match I saw earlier in the year at Hoddesdon Town.

Pitch wasn't quite as bad but getting there.

Pictures and footage are at my webiste THE COLD END

Just a small correction: RWDM never merged with KFC Strombeek. What happened is that RWDM was murdered by the KBVB's licensing commission (I deliberately use the term "murdered" because some clubs with much more debts, less fans and less tradition were spared of the same destiny by the FA) and to avoid the Edmond Machtens Stadium being empty and the community of St-Jans-Molenbeek without a club, Johan Vermeersch (who was in the RWDM board already) persuaded KFC Strombeek to move to Molenbeek and at the end of that season the name was changed to FC Molenbeek Brussels Strombeek in the hope to attract some RWDM fans back to the stadium. That FC Brussels is in financial crisis again now. Some fans who wanted to keep the RWDM name alive re-founded the club as Racing WhiteStar Daring Molenbeek. A merger with another club from 1st provincial division saw the club move to the highest provincial division immediately but money problems then made the club sink back to the lowest provincial league. The initials RWDM live on, but the number of fans is low and the ersatz of FC Brussels is just not the same as the old RWDM. The FA spared clubs with much more debts so we can safely say they murdered RWDM, which was a great club.