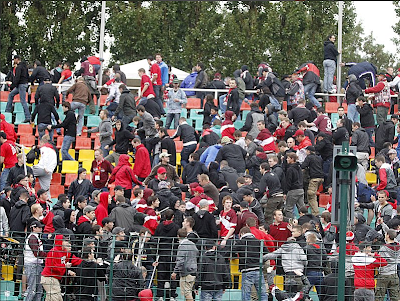 Tragic of The Cup
BFC Dynamo 0-3 FC Kaiserslautern (30:08:11)
An eyewitness account of shocking scenes of football hooliganism from our undercover reporter in Germany....

Last Saturday, the first round of the German Cup was marred by some disgusting scenes of violence, the like of which we haven't experienced over here for a long time. The match between BFC Dynamo and 1.FC Kaiserslautern at Berlin's Jahn-Sportpark left countless away supporters and 18 policemen injured (2 of them hospitalised), and resulted in 27 arrests being made and criminal investigation launched against another 50.

So what happened? BFC Dynamo had qualified to participate in the first round of the DFB-Pokal for the first time in 12 years and were drawn against the Bundesliga side of Kaiserslautern, which obviously meant a lot to the club, the players, the treasurer, their genuine fans – and their hooligans.

Let's first take a look at some facts to understand the background. To say that this club has a bit of a history is rather understated. During the heydays of the German (so-called Democratic) Republic (GDR or East Germany), the team of Erich Mielke's secret police won ten league titles in a row – often backed by some dubious refereeing and accusations of match fixing. And those among you old enough to remember football in the 1980s may even recall their European campaigns when they played the likes of Werder Bremen, Aberdeen or Aston Villa at the Friedrich-Ludwig-Jahn-Sportpark in Berlin's district of Prenzlauer Berg right behind by the Berlin Wall.

With the fall of the wall and the end of the GDR, also came the collapse of the club that once used to be the party officials' darling. Two more seasons had to be completed in the East German league before the country's two league pyramids merged. Dynamo Dresden and Hansa Rostock won the last two titles in 1990 and 1991 in a country that has ceased to exist, and had gained their spot in the Bundesliga. BFC Dynamo failed to qualify and eventually fell down the cracks and never really recovered again. In an attempt to wash away their unpleasant past, they had even renamed themselves to FC Berlin for a period of ten years until 1999, when they decided that they wanted their old name and logo back. In the meantime, the club started to attract all sorts of dingy clientele that wasn't welcome elsewhere, ranging from overt neo-nazis to simple-minded thugs.

One must acknowledge the club's efforts to overcome their negative image by trying to induce a self-cleaning process among their supporters. There have indeed been notable efforts by investing in their youth teams and trying to make the club as socially accepted as possible. Genuine, non-violent BFC supporters (and yes, a fair amount of them do exist) have had enough of their club's name usually being mentioned in the same breath with neo-fascism and football-related riots. But there's only so much power the 'silent' majority can exercise against those willing to resort to violence, no matter what.

For most of the last two decades BFC Dynamo have found themselves playing in the 5th flight of the German league pyramid in NOFV-Oberliga Nord with the likes of Malchow, Neustrelitz and Lichterfelde. Home matches at Sportforum Hohenschönhausen are usually a quiet affair with attendances of 500 to 800. And with the lack of any hooligan opposition on away days, the thugs focus on chasing people at matches against Turkish teams like BAK '07 or Türkiyemspor. 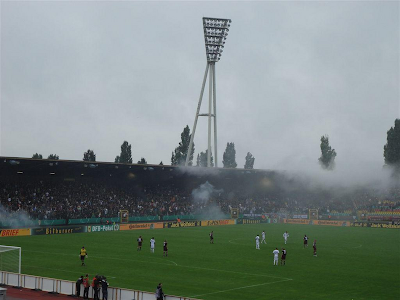 Berlin's Jahn-Sportpark
Now back to what happened last weekend. In Germany, the first round of the cup is usually played a week before the league starts. 64 teams compete in this first round, including all members of Bundesliga 1 and 2 as well as the top four of the previous season's 3. Liga, plus a number of non-league clubs, who can qualify by winning one of the regional amateur cup competitions. BFC had won the regional Berlin cup in the 2010/11 season and hence found them in the first round proper. Like most their big games, the match against Kaiserslautern had been moved to Jahn-Sportpark as it is deemed more secure than their home turf. Incidentally, they played there for a larger period in the East German days.

Kaiserslautern took 2,000 supporters on the 700km away trip, and the total attendance was 10,104 on this cold and rainy day in late July – the highest attendance for Dynamo in the last 20 years! Having a soft spot for Kaiserslautern I chose to join them in the away end. The match itself was an easy affair for the visiting Bundesliga side who won 3-0. Ten minutes before the final whistle it became obvious that there was something in the air. And that was not just smoke bombs and fire crackers thrown on the pitch from the BFC section. The referee had to interrupt the game for a couple of minutes. 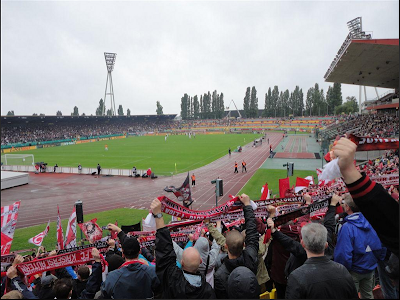 1. FC Kaiserslautern fans in good spirits, before all hell broke loose
Now, despite the fact that the game had been categorised a 'high-risk match' all the riot police positioned in the buffer section between the home and the away end had left with the final whistle. Kaiserslautern's support waved white handkerchiefs and chanted "Auf Wiedersehen" – something you may have seen in Spain before and what has become something of a ritual whenever 1.FCK win a match – home or away. It's just ridiculous that the Sportschau TV programme made this gesture out to have 'provoked' the BFC hooligans.

And as it surfaced during a police press conference yesterday, members of Dynamo's own security firm had opened the gates between the two supporters' sections right after the police had left. A mob of 250 to 300 thugs started steaming into the away section from two sides – via the buffer section on the stands as well as from the stairs behind the away end. I quickly realised that this was going to get nasty when the first handful of thugs chased up the stairs I was going to walk down. Punches were thrown against virtually anybody in their way, along with firecrackers and other missiles thrown into the crowd. Note that there were no like-minded troublemakers waiting for them on Kaiserslautern's side – the away section was filled with a mix of ordinairy fans enjoying themselves on what was supposed to be a fun away trip. And that includes women, children, pensioners.

While it's easy to complain about the heavy policing at football matches in Germany these days, suddenly when you needed them to protect normal people they were nowhere to be seen. On my lucky escape out I noticed scores of cops in riot gear waiting outside the ground. They had no clue what was going on inside while fiddling around with their radio sets. "Get the f**k in there, what are you waiting for", I screamed at them, "it's going off", while I ran away to hop on the next tram that came in. I was still shaking by the time I reached home only about 15 minutes later.

Of course, investigations have been launched on how and why this could have happened despite the heavy policing. As it turned out – and hold your breath, this sounds really dodgy – the stewards, who had opened the security gates of the buffer zone for the thugs to get trough, had closed these very gates by the time riot police arrived, so they couldn't get into the away end. Valuable time had been lost until the 'miscommunication' had been resolved. Make out of that what you want.

I can only hope that everyone injured will soon be back on their feet again. Meanwhile, the topic is hottly debated on fan forums and in the comments sections of online news sites. Comments range from "Those in charge at the security firm should receive life-time stadium bans" to "I hope they'll receive a fine so hefty they'll go bankrupt". There are also claims that the troubles were not caused by anybody affiliated with BFC but rather by travelling troublemakers from Leipzig, Poland and elsewhere. I can't judge on that. For my part, I've decided to never attend a BFC Dynamo match again.


Match report on Sportschau and an Amateur video of some of the chaos.
Follow European Football Weekends on Twitter

Really interesting report. Is there any way I could get in contact with the writer? I am currently writing a dissertation on links between the far-right and hooliganism in European football, and would love to ask a few questions about BFC Dynamo. Thanks, Niall

Excellent report. I was there too, and the trouble really seemed inevitable. I missed it all though, I left right at the final whistle for the press conference.

Here's a report on it by an upcoming Berlin footy magazine, No Dice (website is under construction, so we're posting on Facebook for the next few days...)
http://on.fb.me/nl9R4y

@Niall - If you send me an email I might be able to hook you up. For obvious reasons, the author of this article wished to remain anonymous.

@Sebastian - Thanks for that mate.

@Stephen - Can you keep us up to date with 'No Dice' please. That will definitely be of interest to us....

Sure thing, Danny. We're aiming to publish a quarterly print version with features, photos and illustrations, while having weekly match reports on our site. The quarterly version should also be available to download on the site for non Berlin residents. We'll be writing mostly about football in Berlin, and all in English.

I lived in Berlin for a year. Dynamo are a mess. I visited their usual stadium (which is in a different area but not too far from the Jahnsportpark) but luckily not for a game. I did attend the cup game TeBe Berlin-Energie Cottbus and there a group of Dynamo "fans" decided to show up and cause mayhem. The police wasn't prepared for Dynamo fans showing up in a game between two other teams, I guess that very reason made it so easy for those Dynamo hooligans to get into the stadium and start causing riots. Luckily I was in a different section of the stadium but it was frightening to see even from a distance. Luckily the police was interfering quite rapidly once it became clear what was happening.

It is quite odd that far right hooligans adopted a club formerly tied to the communist regime of the GDR ; they've had a very bad reputation for years, mainly causing troubles in away games.

Nice report there. Although i wasn't at that particular game, i have been to quite a few of Dynamo's games both at home and during their run in the Berlin Pokal last season. I tend to agree with the goalkeeper regarding the comments about the fact that it wasn't the real fans that caused the problems. I'm not professing to being a Dynamo fan, but i've never myself had any trouble or witnessed any trouble at the games i've been too, apart from a few flares, but you get that in plenty of 2.Bundesliga and 3.liga games too. I have heard plenty of stories from friends about their actions in the past, but i haven't seen it firsthand. I do hope Dynamo are able to enforce stadium bans on the thugs that caused all the problems, and if it is true about the security opening the gates that they recieve the appropriate punishment too!

Here's the verdict: BFC to play their next two home games behind closed doors plus a €12,000 fine.