Stuart Clarke - The Homes of Football 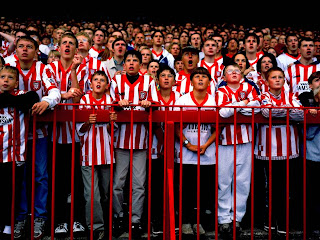 More Than A Game

"if Nick Hornby gave the fan a voice in the nineties, Clarke has given the fan a face.” (The Times)
Photographer Stuart Clarke has been capturing the changing face of football through a lens for over 20 years. His ongoing Homes of Football exhibition has been running ever since and in 2012, a collection of his work is set to grace the new National Football Museum in Manchester.

Clarke has been hugely influential not just on some of my work but on pretty much every football website owner and photographer I've ever spoken to. If you love this sport, you'll love the Homes of Football website. Type your teams name in the search engine and you'll be instantly hooked.

Personally, I fell in love with football after spending too long in my youth staring at a copy of L.S.Lowry's "Going To The Match" that my parents had hanging from a wall. Clarke's photographs have managed to bring the magic of that painting into real life. He does indeed give the fan a voice.

Anyway, enough gushing praise from me. Stuart was good enough to give EFW some of his time, so lets hear what the maestro has to say about his work: 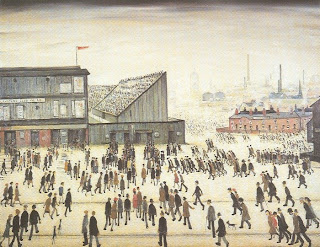 L.S. Lowry and his "Going To The Match" masterpiece.
You've focused on fan's experiences of football from World Cups to grass roots, do you have a preference on the level of matches you photograph? I like matches at all levels. The BIG games have the feeling that everyone is watching (on tv) and I can send a postcard home; the SMALL games have that intimacy.

What is the best event you've covered? Euro'96 in England, Japan 2002 and Portugal Euro 2004, all tied. Watford beating Bolton in the Play-Offs at old Wembley 1999 ...and France beating Brazil World Cup 1998 as one-day events.

Is there an event that you'd like to photograph that you haven't already? As corny as it sounds : a match that takes you by surprise - it may be a big or a small match.

You must get sick of "favourites" questions but erm...do you have a favourite photograph? "Cry For Home" at Greenock Morton, 1995. Football's romance against a backdrop of reality. 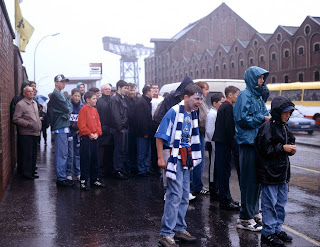 "Cry For Home" taken outside a freezing cold Cappielow, Greenock Morton in 1995.
Do you have a favourite ground? Turf Moor Burnley, for photographing. Brunton Park, Carlisle and Shepherdsbridge at Coniston, for being 'home'.

Would you say you were a *deep breath* groundhopper? Yes... in that I appear to always want another one (a football ground alcoholic) but NO in as much as I am happy to settle at one ground. And another. And another...

Why is photography so special to you? Captures a moment in time and represents that moment as something more permanent that you can look on many times ... and touch. 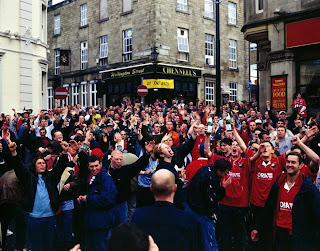 Barnsley fans "Drinking Red Champagne In T'town Square (UP THE REDS)"
It is a pretty competitive marketplace these days no? It always was I think. EVERYBODY in the World has a camera and takes pictures. Not many people write or paint. My photography has to look like... but stand out in the crowd.

Do you get a chance to actually enjoy the games you attend or does the pressure of work take that away somewhat? I love almost every moment - from 5 hours before the game when I arrive... the first half is tense because there is a lot to work out (positions, possible photographs, key players).

The Homes of Football is one of the longest touring art exhibitions in British History. You must be very proud of that fact? It's the longest! Yes I am proud but it's all just been a warm-up to what I am about to achieve! 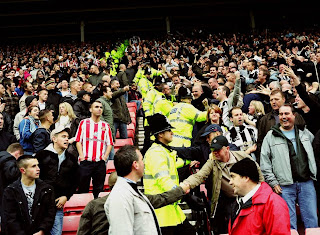 "A Hand Across The Rivarly" Sunderland v Newcastle in 2007.
Are you into any other sports? I cry at almost any long-distance running, love watching skiing and the Grand National on tv and i am a swimmer of lakes, rivers, sea. Hope golf dies a natural death, but have got over wanting the same for rugby and cricket.

A lot of current sports photographers I talk to cite you as an influence on their work, who were your influences? War photographer Donald McCullin, humourist Elliot Erwitt, Portraitist August Sander, road-tripper Robert Frank, film-maker Charlie Chaplin.

Has the ease of digital made your life a whole lot easier or do you stick to traditional methods? Have not yet explored Digital photography and may never. I love to have 'a piece of film' in my hand, alongside its likeness as a digital file. Love email and twitter. 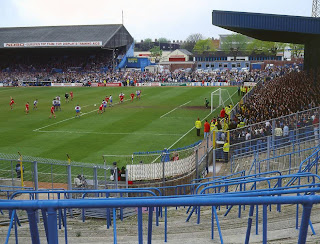 "Never Take The Goldstone" Brighton v Millwall in 1991. I've included this one purely for selfish reasons because I'd have been at this game in the North Stand to the right, down the front, slightly left of the goal. Somewhere I stood for 15 years or more.
Why did you only take half a dozen photos at Italia90? Is that where you first got the inspiration of photographing the crowds at football rather than the action? I had my girlfriend with me! Yes, I did not want to be shutter-happy and take holiday-snaps.

Your website is sponsored by the PFA but the members (players) of that organisation are seemingly only photographed by you in the context of the stadium and crowds. Is that just a personal preference? I love that anomaly that my biggest supporter bar none is Gordon Taylor/The PFA , who hardly ever get a look-in except in the context of the whole match spectacle. But that is why he/they like it I think. They were supporters once and will be again.

Do you have any of your work in the Museum of Football? The entire collection shall be housed there from 2012. It has to be protected somewhere. It's a national treasure. I pinch myself that i have had something to do with finding it. 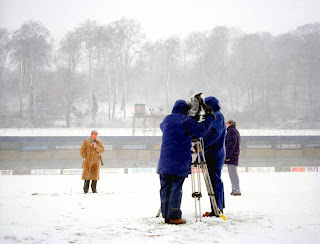 "Reporting From The Ground" at Wycombe in 1990. An image that Motty says launched his sheepskin coat into superstardom.
Are you off to South Africa for the World Cup? I am doing it differently this year. To be accredited you have to be there 5 weeks from before start until after. I can't do that. I have a 4 year old daughter and I also want to see some of the World Cup back on English soil. But I will doubtless be there at some point and I went there when the stadia were being built.

Finally, if you need a bungling amateur to write irreverent swathes of text to accompany your fantastic photos of matchday experiences then I'm your man Mr Clarke! Yes, I would like that at some juncture so let's do it next March (1 year's time). stay in touch.

Fans of Twitter can follow both Stuart Clarke and Homes of Football both of which are hugely entertaining.
- Feel free to comment below -
Posted by Danny Last at 14:26

Whilst I'm on the subject of football photography, I must also give a nod to David Bauckham. His Non-League photographs are absolutely top draw and worthy of Five FIFA stars any day of the week. Have a look here and enjoy:

I like taking photos of football grounds, as a bit of a hobby, with what I call my 'digital box brownie'. I know nothing about taking pictures, I just point the camera & press the button! Any half decent snaps are flukes!

Looking at both Stuart & David's work, I really am in awe! They are a joy to work your way through.