If you've logged on today expecting to see some grainy eight year old photos from Italian football grounds, then you've hit the jackpot. Big Deaks and I have been up in the EFW loft and we've unearthed some dodgy old photos which I thought I'd bring to you in the next few weeks. So bear in mind that these were taken with a £3 Boots disposable camera, it was eight years ago and they reach these pages courtesy of a rickety old scanner.

Accompanying me on this trip to Milan was the aforementioned Big Deaks (also from Brighton), Sir Martin of Baines & Young Philip Graystone, both originally from Preston in the North End of England. I seem to recall a collective decision to 'take it easy' the night before our flight came back to haunt one of our travelling party.

We pitched up at Young Philip's abode - who was then living in Walthamstow - at closing time on the Friday night and proceeded to raid his superb wine cellar and play cards until silly o'clock. Consequently, the flight to Milan was memorable for a pasty faced Mr Baines shuffling - head in hands - up to the back of the plane to fill out a form entitled 'losing the will to live'. He survived - just.

So what do we remember about the San Siro!? Well, for a kick off, as we arrived at the stadium there were punters climbing over fences and walls trying (successfully) to get in for free. It took about four days to pick up our tickets outside due to a amalgam of factors. Principally, the main reason being that we had only learnt one word of Italian in preparation for our trip, which was 'RAVANELLO' meaning 'RADISH'.

Inside, the atmosphere was both tense and raucous due to a large travelling contingent from Napoli. The San Siro was as you'd expect, an absolutely magnificent place to watch a football match. If you haven't been - what are you waiting for!? Thoughtfully the Milanese and Nepalese ultras kept each other warm on a chilly night by firing off flares into each others sections. 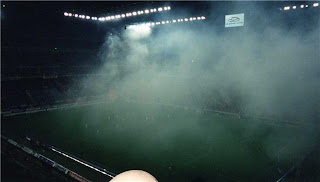 Ronaldo & Vieri were on the books for Inter at the time but both were injured for this match. Amongst the Inter players who did take to the field though were Di Biagio, Seedorf, Zamorano, Lauren Blanc (who to my knowledge didn't wee himself on that night), Zanetti, a baby faced Robbie Keane (who spent the game flapping his arms about because nobody would pass to him), Zamorano and Uruguayan International Alvaro Recoba.

For one reason or another Recoba had fallen out with the Inter fans. As a result when he touched the ball, the fans booed. Now, the word 'boo' doesn't do this justice. A vociferous, deafening shrill
echoed around the place every time he had the cheek to go within a gnats crotchet of the ball and this was from his own fans. The four of us didn't want to look like we didn't know what on earth was going on, so we stood on our seats and bellowed out 'RAVANELLO' at the top of our voices. Very rewarding.

After Inter had brushed aside Napoli (3-1) our thoughts turned naturally to beer. Finding a pub in Milan wasn't that easy. En route a gang of ultras sped by on scooters and threw stones at us - all good fun. Eventually - after pounding the streets for umpty thrumpty hours - we found a quality pub in which we were able to put some class in our glass. We shocked the locals with our ability to sink the equivalent of a small battleship in beers in next to no time. Well, it was the year 2000.

The next afternoon we boarded a train to Brescia. It only took 50 minutes but we weren't quite prepared for what was to follow. Outside the station a baying mob of around 120 lads had lined up alongside a wall. Not quite what we'd had in mind for a Sunday afternoons entertainment. We skipped across the other side of the road, gave them a twinkly smile and headed off to the pleasingly Italian sounding Stadio Mario Rigamonti - home to Brescia FC. 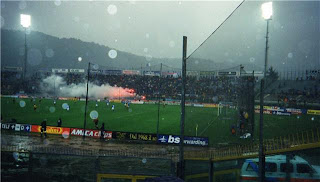 Then the heavens opened. It rained cats and if you would dogs. Despite all this taking place eight years ago, Young Philip claims he is still a bit damp from that afternoon and Big Deaks says that his Claire Rayners (trainers) are still drying out in his airing cupboard. 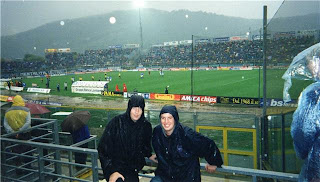 Let's all meet up in the year 2000. Big Deaks and I. I appear to be sporting my Brighton and Hove Albion non waterproof. 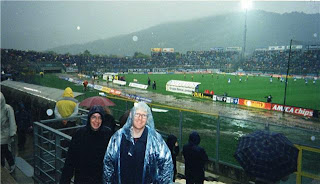 Young Philip and Sir Martin of Baines. Did they walk 500 miles to be there!?

The actual match was turgid. Luckily, we could hardly see any of it anyway due to a combination of umbrellas, huge advertising hoardings, fencing and over sized dugouts. Every now and again though we could make out Roberto Baggio or if you prefer 'The Divine Ponytail' trotting over near to us to take a corner for Brescia.

That's about all I remember from our Italia 2000 trip. Four lads, two matches, a plethora of nice cold beers, it's not surprising we are still going on these trips is it!? Ciao for now.
Posted by Danny Last at 09:33