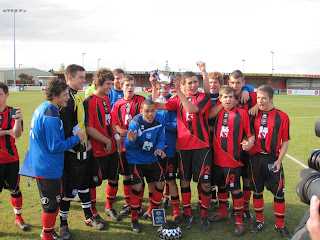 As per usual, I was joined by Cynical Dave (Cinico Dave as he is known to his Spanish fans). After raiding a chemist overnight for our blue pills we joined up with Phil Daniels, Sting and the boys before heading along the coast to Eastbourne on our vespas. Brighton is of course synonymous with Mods and as for Bognor, they're known as the Rocks. Mods v Rockers it was then.
Bognor Regis used to be a big noise in the Isthmian Premier League but relegation this season means they'll be kicking their heels in the Isthmian League Division One South in 2010/11. That is the eighth tier of English football. A bit beneath a team who are in the Guinness Book of Records for winning this competition a record 5 (five) times in succession between 1980-1984. They really did rock in those days. 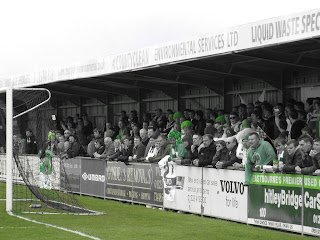 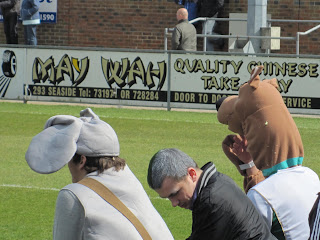 I would have gotten away with dressing like this if it wasn't for you meddling kids. 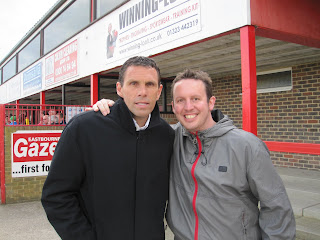 Hola Gus! Albion gaffer Gus Poyet joins EFW.
Contrary to popular belief, the Sussex Senior Cup isn't a competition designed purely to line Brighton and Hove Albion's trophy cabinet each year. Blink, blink, I mean no blinks. For reasons of fairness to other Sussex clubs, the Albion have to field their reserve side. That hasn't stopped them winning it three times in the last five years though.
We left Phil Daniels and Sting fighting running battles with Ray Winstone on the beach and headed towards the Langney Sports Club via a couple of pubs on Seaside (Road). The first was the Kings Arms, a throw back to the 70's with a David Essex album being played and a barmaid who asked Dave if he wanted ice with his pint of Pedigree. The Arlington down the road was a bit better. £5 for a pint and a curry, although the later contained 20% curry and 80% rice.

There are two bars at the ground itself. One is huge and would have catered perfectly for most of the crowd of 605. Not today though old chap. It was closed for an after match function for the Sussex FA blazer brigade. Quite why they couldn't have set it all up after the game was a mystery. As it was then, we were shoe-horned into another bar around the corner, which was jam-packed with a couple of hundred vociferous and colourful Bognor fans.

Eastbourne Borough isn't the most accessible ground in Sussex. I think the final has been held here over the past few years for its exemplary selection of shiny cutlery and napkins for the aforementioned committee knees up rather than its actual location. 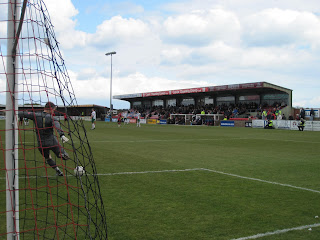 It was a cold windy afternoon... 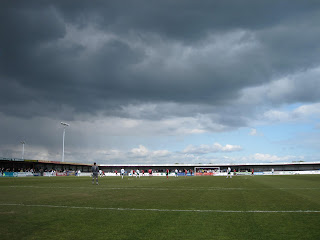 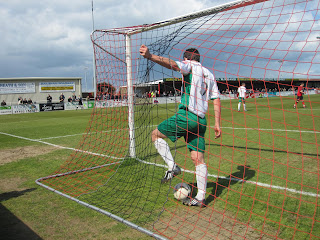 ...and glum Rocks defenders picking the ball out of the onion bag at regular intervals.
At the turnstiles we paid our £10 which seemed like quite a lot of Leslie (Ash, cash, ie Leslie Ash played Steph in Quadrophenia and in cockney rhyming slang it...oh never mind). We weren't to let that ruin our day though and a quick rub down with the Non-League Paper revived us as.

Bognor Regis did themselves proud, backed by their tremendous green army of fans but the Albion reserves won quite comfortably in the end. In truth, it's a bit of a folly that Brighton are allowed to field a side in this competition. Pitching Adam Virgo who was playing for Celtic not long ago against the Rocks isn't really on. The half arsed celebrations at the end showed what it meant to Brighton players and fans alike - not much. A Bognor v Worthing final for example would have been a better showpiece for a competition with bags of history. 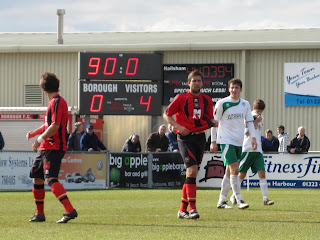 And it's goodnight from him. Adam Virgo is on his way out of the Albion. 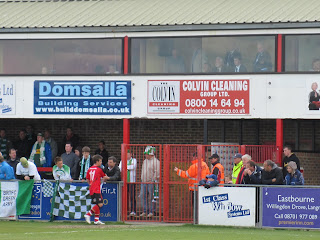 And it's goodnight from him as well. Dean Cox last photo in a Brighton shirt?
For more photos of the day CLICK ME (best viewed as a slideshow)

Danny, ou're quite right about the reason for the Final always being staged at Priory Lane ... it's the only ground that can stage a 'banquet' (apparently) without (and this is the important bit) charging the SCFA a fortune, as Crawley would, and no doubt BHA will in the future. So, we at EBFC are cheap and it would seem, stuck with the Final every year!

Oh, and shame on you - it's LangNey Sports (know you can understand why the club changed its name!)

Thanks for those comments David. As usual then, those in charge prioritising a big banquet and their stomachs over any concerns about the fans.

I don't see why they can't have their big feast somewhere else.

I might of course have misjudged the mood on this one. Maybe fans are happy to travel to Eastbourne. I'm not having a pop at EBFC by the way. Not their fault obviously.

I'm guessing from 2011/12 all the finals will be at an empty Falmer Stadium anyway.

Ok, maybe Im a dumb Yank but am I to understand that this “Steve Percy” somehow won a competition in 1981 to play for Barnet, actually got in a match, then “nutmegged” (WTF?!) a Ware guy, and started a bench-clearing brawl?

And got red-carded?! Brilliant!

Chaz, I've moved this comment to the Barnet report which is where it was meant I think.