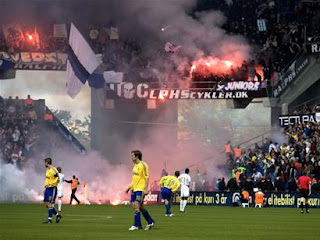 The New Firm
You'd of heard of the "Old Firm" between Celtic and Rangers and even the "Old Farm" derby between Ipswich and Norwich but this weekend we're all over the "New Firm" derby here at EFW. The New Firm is a play on words relating to the Danish football rivalry between FC Copenhagen and Brondby IF. We're heading off to the Parken in Copenhagen this very Sunday at 18:00 to drink in the atmosphere of a derby day - Denners style.

So, who to support? To give us a better idea, we dialled up two chaps in Copenhagen who are best of mates six days a week but when Sunday comes - for 90 minutes anyway - they'll be putting their friendship firmly to one side to roar on their heroes in the "Slaget om København" (Battle of Copenhagen):

Hi lads, can you introduce yourselves and the teams you support and why.

RS: My name is Rasmus Skude. I am an IT Manager and I have been working in the IT industry since 1999. I play football myself and have done so for as long as I remember. I have also played tennis on the highest level in DK when I was younger.

I have supported Brondby since the mid 80's where I saw them the first time. The reason is that I like the fact that is a "real" club and everything is not all about business like FCK and they have always playes positive football with focus on attacking and have the ball as much as possible. I like the way they try to use the young players from their own ranks to ensure that about half the players on the first team have played in Brondby's youth teams which is one of the goals.

LM: My name is Lars Meincke and I'm nearly 38. I was born and raised on Østerbro the area where Parken is placed. Until recently I've seen my self as the typical inner city person. In the early summer of 1992, I was given a free ticket to go see the new Copenhagen team (FCK) as they where playing their first ever home game. I had at that point only been interested international games but I was captivated with the atmosphere of the stadion. Since then I've been season ticket holder but nowadays I go a few times a year with my 2 sons.

For several years, I worked for the company that sponsored FCK and have several shirts at home with Kinnarps on! Since the difference between the two clubs in the last 10 years have become more defined, I've stuck with my team. 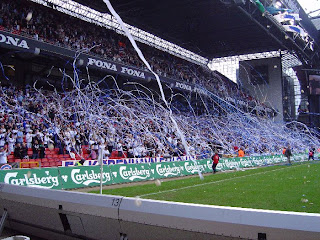 An FCK welcome
Is the FCK v Brondby match the biggest in Danish football?

RS: By far the biggest match in Scandinavia!!

LM: Without any doubt!

RS: Normally tv starts broadcasting several hours (4-6) before the game with highlights, comments from players and experts etc. I always watch these games either live in the stadium or on tv with my friends.

LM: You'll typically have the game at 7 o'clock and all through the day Brøndby fans will be in the inner city area and have all the FCK fans in the Park the surrounds the stadion. An hour before game start people will move into the stadion.


What is the away allocation given to each team at the respective grounds?

RS: Not sure but I guess only a few thousand. 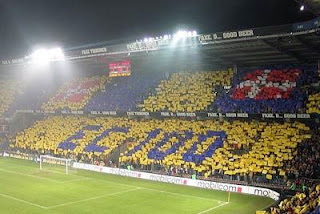 A Brondby welcome
Can we expect a raucous atmosphere and tifo displays?

RS: Yes for sure.

LM: The tifos always work better at Brøndby stadion but there will be some

Is it a "friendly" derby or should we expect to see a "Slaget om København" (Battle of Copenhagen)?

RS: It is always the "Battle of Copenhagen"

LM: ALWAYS the Battle of Copenhagen.

Is there an ultra culture in Danish football?

RS: Yes for at least 3 clubs. FCK, Brondby and AGF.

LM: Yes and you can find the them at far end of the park where they occasionally fight each other after the game!

FCK were only formed in their current guise in 1992 but they have a longer history than that no?

RS: I will leave that up to Lars to explain.

LM: FCK were formed after a merger of B1903 and KB - two of Denmarks oldest clubs. 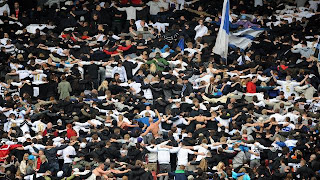 FCK fans warming up before the match
How is victory in The New Firm match celebrated? Does each team's fans have a particular area to gather in or fountain to jump in - like in Spain?

RS: Some supporters go to specific pubs but most of us "normal" supporters do not do anything special unless our club wins the championship or similar. We do not have a pub culture like you have in UK.

Who has won the most trophies between the two of you?

LM: Brøndby but they are also an older club.

Does it depend on which part of Copenhagen you derive from as to whom you choose to support?

RS: No. Each club has fans all over Denmark. I believe Brondby have more fans outside the Copenhagen area than FCK but I think it is about the same in total.

LM: Yes. Inner city is FCK and the suburbs are Brøndby. 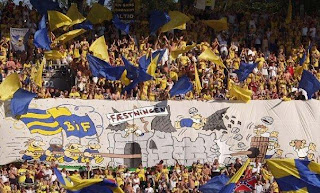 Brondby - more fans outside the Copenhagen area than FCK!?

We like a beer here at European Football Weekends and we've heard it costs an arm and leg in Copenhagen! How much is it and is it worth it?

RS: It really depends where you go. If you go to a bar in the center of Copenhagen you probably pay around 50 DKR for a pint but in smaller places no in the centre the prices are sometimes 20-25 DKR.

Which players should we be looking out for on each team?

RS: On Brondby you should look out for Michael Krohn-Dehli (Danish international) and Alexander Farnerud. They also have some young promissing talents like Jens Stryger Larsen
On FCK I think Atiba Hutchinson. 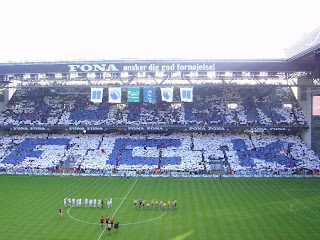 The New Firm
Can we have a score prediction please lads?

And finally, can you sum up your clubs in a Tweet of less than 140 characters?

Brondby fans march to the stadium.
Thanks lads! The EFW team will be at the big match this Sunday.

Who do we support!?

I must admit I've never been to a match in Denmark yet. But after reading this article I wish I'd be there this weekend...
However, I did experience how the Danish can have a party: Euro 92 final in Göteborg to be precise. A well deserved win - and of all the big games I've watched where the team I supported lost (Germany in this case), for some reason this one was the least hurtful.

I'm a bit disappointed about how the questions are answered by the two fans. They don't really give much insight or "additional information".

First off, there has been debate amongst the FCK-fans up to this fixture that the "magic has gone" (Tak til Karsten CF1). While the derby will always be of high importance, it seems that Brøndby aren't really on the same level as FCK these days and that really takes the top of the excitement. It will however always be a battle for the bragging rights and "a battle for Copenhagen" so off course it matters a lot when we beat the living - out of Brøndby.

It's very relevant to explain that while Brøndby have their name on more league trophies than Copenhagen (a total of 10 I believe), only two of these trophies were secured after the year 2000. Since the millenium change Copenhagen have secured no less than six of these trophies (2001, 2003, 2004, 2006, 2007, 2009) and are favorites as champions for this season as well.

Also, there are a few more players to look out for on the Copenhagen squad. It's hard to predict the starting XI seeing as Pospech might be ready for tomorrow, which means that there are bound to be changes from the starting XI against AGF. In any case a few you might want to watch closely are Vingaard, Pospech, Santin, Grønkjær and Ndoye.
Vingaard still isn't a sure regular starter, but the way he is playing he should be very close. Highly energetic and opportunistic two-footed player with a killer drive. He'll attempts driven shots from just about anywhere on the pitch. Plays both wings but can be used as an offensive mid as well.

Pospech, right (wing)back, are a very consistant player who can explode up the right side, get past his man and launch a precise cross. Alternatively he can chose not to cross the ball and seek into the opp. area with the ball. This has secured him no less than 4 goals this season. (Naturally this causes defensive shortcomings once in a while, but meh).

Santin has been under heavy critique of late because of his lack of goals, but with a hattrick in his last match against AGF we might just see Santin reborn and in top form.

Also watch Grønkjær and N'Doye. Their form swings a lot but if they have a good day they are dangerous opponents.

Lastly, the game will be won by Copenhagen with at least a two goal margin!

FC Köbenhavn against Bröndby might be the biggest game in Scandinavia but I would say Bröndby against FC Köbenhavn is not. For different reason FCK supporters boycott the away game and it was a bit strange to see only a couple of hundred FCK fans inside Bröndby Stadion. That said the atmosphere was really good, almost hostile, and of course it is still a great match to attend.

I am sure tomorrow´s game at Parken will be another reminder that even smaller countries, like Denmark and Sweden, have derbies where the atmosphere is better than at most games in England.

To decide what match which is the biggest derby in Scandinavia I hope Danny and his friends go to Råsunda for an AIK vs Djurgården game in the near future. It would be interesting to read how a neutral observer compare the two derbies.

"Thanks for your link! I hope you're gonna get a great day and a fine match at our atmospheric if not exactly pretty stadium!

By the way, you're certainly being taken for a bit of a ride by the Brøndby supporter you were in touch with -

Quote:
"The reason is that I like the fact that is a "real" club and everything is not all about business like FCK and they have always playes positive football with focus on attacking and have the ball as much as possible. I like the way they try to use the young players from their own ranks to ensure that about half the players on the first team have played in Brondby's youth teams which is one of the goals."

- this pretty much encapsulates every delusion of grandeur and every ridiculous notion of authenticity in the Western suburbs, and most Brøndby fans know them all by heart.

Just to exemplify, while none of the clubs are heavily reliant on academy players these days, you'll find two dead certs in our starting lineup, our player with most appearances this year, William Kvist, and our club captain Hjalte Nørregaard, who are both products of our youth policy. If Brøndby academy players like Randrup or the odious Mike Jensen play tomorrow, it'll most likely be due to injuries or suspension to Swedish international players."

Not my words, but i just thought that they should be mentioned here. All credit to -smølle at http://sidelinien.dk/forums/showthread.php?p=526101#post526101

Can't wait untill tomorrow! The magic is definitly not gone for me! These fixtures against Brøndby are still the biggest matches of the whole season.

I'm a bit disappointed about how the questions are answered by the two fans. They don't really give much insight or "additional information".