Inter Milan 2-0 AC Milan (24:01:10)
For once, I'm going to shut up. No really I am. Just allow me to explain that this report was written by Nick Waterhouse, in a first of possibly many, of your European Football Weekend experiences. Over you to Nicky Boy: 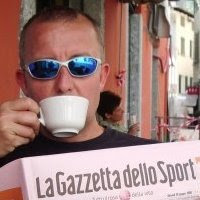 All aboard the Serie A Espresso
A few months ago it was decided over a couple of post work drinks to make the pilgrimage to the San Siro in Milan. A couple of scoops later and we were off to the Milan derby. In true EFW tradition, there was no point in going all that way without turning 1 game into 2, so all we needed was the fixtures. Ahhh the fixtures….one of my favourite expressions is "football with no bother", unfortunately, rather like their Spanish counterparts, this is not an expression that is muttered too often at the Italian FA’s headquarters. The kick off times for this round of fixtures were not announced until a month before the games, making the booking of flights a lottery. Additionally, tickets are not on sale until a week before each game. However the TV chiefs were kind to us and selected Juve v Roma for the Saturday night and the Milan derby on the Sunday.
All aboard the 6.06 train to Gatwick on Saturday morning then, luckily no one took this time literally so we did not have to listen to 2 hours of half-wits pleading for goal line technology or whether Gerrard and Lampard can play together ZZZzzzzz....

One issue guaranteed to give me sleepless nights is not having match tickets in hand. Due to the magnitude of the fixtures we were attending, we were forced to go down the dreaded ‘Seatwave.com’ route, i.e. tickets 4x their face value. They were to be delivered to our hotel but upon our arrival in Turin.….no tickets agggghhhh. Panic not though, we re-read the small print and they would be there 3 hours before kick off. So we took ourselves off into Turin to see what it could offer us… I say, when in Rome (or Turin) do as the locals do, so to put us in the mood we popped a couple of espressos down the hatch and moved into the pizza market. 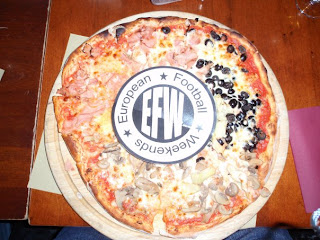 I’m delighted to report that EFW pizzas are now widely available in Turin! 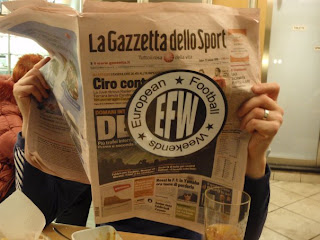 Anything to sell a paper those Italians. 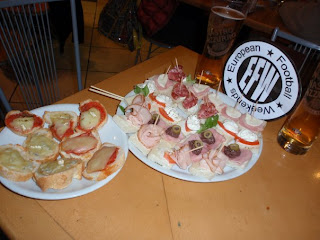 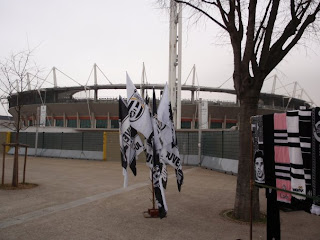 The Soulless Stadio Olimpico. James Brown would have hated it. 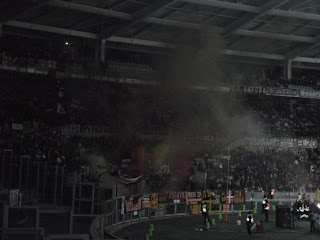 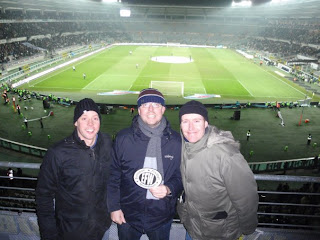 Kev, Nick and Binso pay the Old Lady a visit. 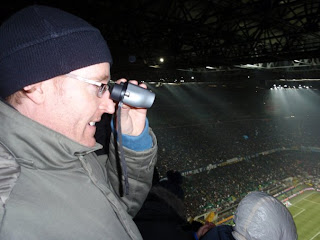 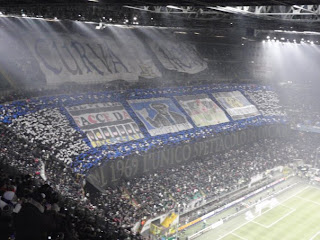 In the blue and black corner Inter.... 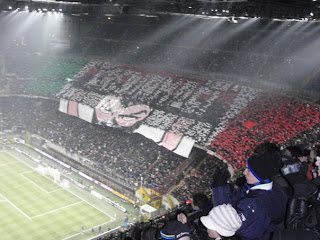 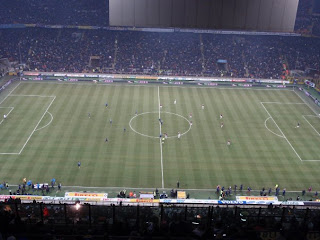 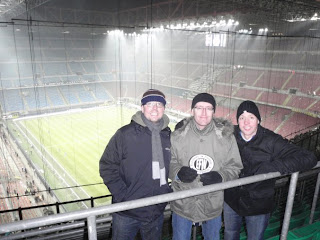 I went to the Old Firm derby this year and the same Milan one and couldn't agree more that the Milan one knocked it for 6.

Was that a couple of my pics on there Danny?

Macca - they were all Nick's photos. I would have credited you otherwise old chap. It looks as though you weren't sitting too far away from him.

He said he would have taken more (photos) at both games but it was absolutely freezing!

Interesting that you both say that the atmosphere in Milan was better than in Glasgow. Probably the early kick offs for the Old Firm games these days don't help?

You are more than welcome to use any photos, especially if Jack's in them - makes him feel like a celebrity! :-)

The old firm game is over rated, over familiar and dull full stop.

Its all hyperbole as Scotland has nothing else football wise to brag about.

Glasgow in the top 10 of derbies, yes, but probably about 8th or 9th.

Do you care to shed light on the top 10 derbies in Europe, in your opinion then Anon?

really like this piece.Have always wanted to go to the milan derby and this reinforced this view
As a celtic supporter who has being to many derbies with rangers and also several of the big derbies in Europe I would have to agree that the atmosphere at the glasgow derby is not as good as some of the derbies in Europe.The derby has lost a lot of its venom due to government pressure on the two clubs to stop the sectarioan chanting and standing.Derbies over the last few years are no way as good as derbies 10 years ago.
Its not just the glasgow derby that it is overrated now I also believe the madrid v barcelona game is even more overhyped.The atmosphere in glasgow is better than this derby at either the no camp or bernabeau.For me the best derby in europe i saw was gal v fener in the ali sami followed by the rome derby,galsgow and then madrid v Barce.

They ranked the Milan derby only at #36. Personally, I'd say you still find some real gems in Eastern Europe and South America these days.

According to the excellent Football Derbies website we have *ahem* :

i often wonder how these polls generate these ratings for the best derbies.
I know that a lot of people who write these reports or vote on them have only being to a handfull of these matches.
i do not know how you can rate a derby (from TV clips or reputation alone) without at least attending it
mark whelan

Yep, good point well made Mark. Everything is subjective isn't it. These ratings should only be taken as a very rough guide obviously. I doubt there are many punters lucky enough to have been to more than a couple of those mentioned.