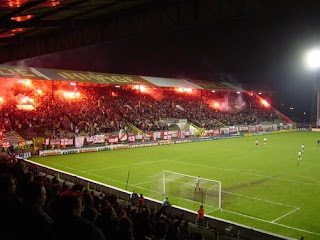 The Great Old
Belgium finally has its very own galactico, no really. This week, their PM Herman van Rompuy romped to victory in the race to become President of the European Council. So how to celebrate this historic moment here on EFW!? Well, I thought we'd blow the cobwebs off our Belgian history books and delve deeper into this wonderful country. Don't all run away now....

Where better to start than with the oldest football club in Belgium (and relax - Ed). Royal Antwerp FC are registered at No. 1 at the Belgian Football Association, hence their splendid nickname 'The Great Old'. They also happen to be EFW's favourite club in Belgium. We have spent many a happy hour sipping a De Koninck or two with our pals there and who can forget the awayday we had with the Antwerp lads in Leuven - the home of Stella Artois - last season.

So, to find out more about the team and the fans, we dialed up one of our contacts in Antwerp, namely, Pat. He played for Royal Antwerp in his youth and has since supported them man and boy through mostly thin and thinner for over a period of 30 years or more. So pull up a chair as we take you through the wonderful world of Royal Antwerp FC:

What is the Royal Antwerp support like both home and away? Antwerp has always had a passionate support. Even if we are playing in our 6th season in the 2nd Division, we still get crowds that many 1st Division teams are jealous of.

What sort of crowds do they attract in terms of numbers? Antwerp is a working class family club, but we attract all kinds of people and races. At the moment we average around 5,000 fans at home but this can easily rise up to 10 or 12,000 if the team plays well or we play an attractive opponent. Away we normally always have between 700-1500, more if it's a top game or if the away stand allows. The problem is away stands in the Belgian 2nd Division often aren't big enough. 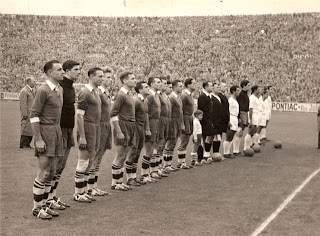 Happy days. Our boys line up against Real Madrid in 1957.
How easy it it to obtain tickets for home and away matches? Tickets are normally easy to obtain for home games but unfortunately the club don't do online sales. Away games are more tricky as often - to get a ticket - you have to be a member of an official supporters club. Also, due to poor allocations given by many clubs it can be hard to get your tickets.

What is the away allocation given to visiting teams at the Bosuilstadion and do any teams actually fill that? They receive around 1000 tickets but almost no team takes up that allocation. Maybe Lierse will be the first in January if they are still top of the league.

What is the Bosuilstadion like? It's really old but for us Antwerp fans it's a thing of beauty, full of charms and nostalgia and a symbol of the good old days in the 1st Division.

Doesn't it only have three floodlights? We have four of them, three large and one small. On the 15th September 2000 one went down during a heavy thunderstorm so they replaced it with a smaller one. 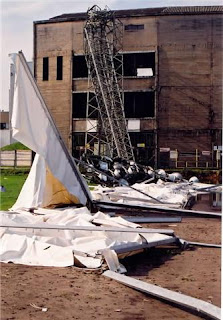 The most disturbing image I've ever had the misfortune to see. 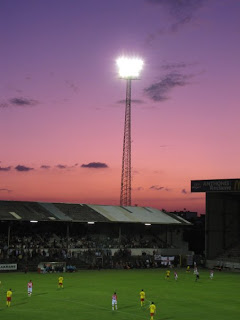 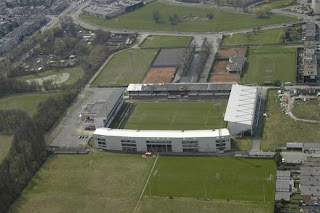 Bosuilstadion in all its old skool glory.
Who are RAFC's main rivals? Our city neighbours Germinal Be*****ot and Bruges. Nowadays in the 2nd Division it's Lierse.

There are so many teams within a close vacinity to Antwerp, which of these are considered by fans to be a genuine 'local derby'? There's only one real derby and that's Germinal Be*****ot. Matches against Berchem Sport also be considered a derby but they play in the 4th Division these days.

Is there an ultra culture in Belgian football? There is but more so in the French speaking part of Belgium. Teams like Standard Liege and Charleroi for example.

Do many RAFC fans follow the national team? Nowadays, there's almost no interest at all but we did in the past when our former captain and defender Rudi Smidts played for them between 1989-1997.

Is there much violence in Belgian football? There was lots during the late 80's & 90's and at the beginning of the millennium but police operations have put an end to most of it now. It still exists but it's more pre-arranged these days and some fanatical fans still engage in vandalism of grounds.

What do you consider to be you biggest match this season? The regional derby with Leirse, home and away.

Which other teams in Belgium have a good support? I'm talking about passionate fans here and NOT which ones have good hooligans! KV Mechelen and Standard for sure. Also in the 3rd Division Racing Mechelen has a passionate support.

What is the best match you can attend in Belgium in terms of atmosphere? Nothing beats the Antwerp v Beerschot match but unfortunately we're not in the same league anymore. If you ever have a chance to see the Mechelen derby, that's well worth your money. Then of course you have games between the top teams like Anderlecht and Standard.

Is it true that most of the RAFC songs sung by fans are in English? Yes it's true but I don't really know why. Probably because Antwerp was founded by Belgian and Englishman as the Antwerp Athletic Club, so the English influence has always been there; songs, flags, English style clothing..

The club seem to think there is a partnership with Manchester United going on. However, when I travelled with Royal Antwerp fans last season, the fans I talked to seemed to distance themselves from this. In fact, the flags I saw around the stadium were Man City ones! (bloody hell that question is longer than one of Garth Crooks - Ed) Some year ago, Man Utd sent us some excellent young players like John O'shea, Johnathan Evans, Sylvan Ebanks-Blake, Danny Higginbotham, Ryan Shawcross and Frazier Campbell who now all play for different Premier League teams. In the second half of the season though, they called them all back and we had to start building a new team without those lads who'd put us top of the league. That bothers many fans here. If you send them, let them be here for the whole season or not at all. Indeed, some Antwerp fans have a close friendship with City fans and they visit each others games 2/3 times a season.

Who has the best stadium in Belgium? Many people say Racing Genk but the away end is really a no go!

And the worst? Tubize was a sh*thole last time we went there but when they were promoted they built a new stand. Maybe it's better now? We will find out soon as they are back in the 2nd Division.

What are RAFC's prospects for this season? The play-offs will be minimum requirement but hopefully this year will see us promoted.

What's your view on English fans? Belgians like the English way of support. Many of your songs are used here in our grounds. 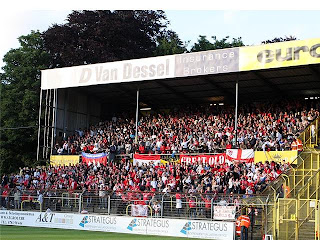 Another good RAFC away turn out. 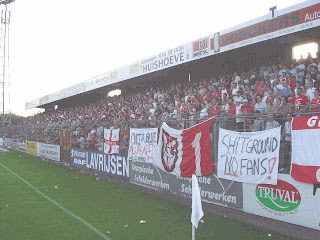 What is Antwerp like as a city? It's a great city to live in. There are loads of things to see and do and it's full of bars with no closing time! (Where do we sign - Ed).

We love a beer with our football here at European Football Weekends. Can you recommend any good pubs? It all depends what type of bar you like of course. There are all types for all sorts of people. We like the Irish pubs to watch the English football in.

One of the main reasons tourists come to Belgium is because of the unbelievable selection of fantastic beers. Any that you'd recommend? Instead of a regular lager you can try "De Koninck" which is typical of Antwerp. If you like your beer a little stronger, try "Duvel" but there's just too many to mention. Belgium is indeed world famous for it's beers and rightly so.

And finally, aside from our new leader Herman, can you name me any other famous Belgians? When it comes to sports, probably Justine Henin and Kim Clijsters who've both been No.1 in the world. A big honour for a small country like Belgium. We also have Eddy Merckx, the world famous cyclist. Outside of sport there's famous painters like Peter Paul Rubens, Pieter Breugel and Antoon Van Dijck. Also. Adolphe Sax the inventor of the saxophone and our 'muscles from Brussels' Jean-Claude Van Damme. Also our very own Hans is becoming a star in England! (see this story for details).

That's it folks - next time you are in Belgium, do yourself a big favour and pay a visit to EFW's favourite team in Belgium - Royal Antwerp FC. You could even have a nice beer afterwards. What's not to like!?

A couple of further points:

i) If you want to see the Royal Antwerp fans in action. Have a look at the following clip from You Tube where incredibly, they took 1,100 fans to a pre-season friendly away to Bristol City:

For me the fans of Rfc Liège are brilliant as well. Really noisy and have a big away following (best in the second division after RAFC ;)). The worst ground for me isn't Afc Tubize anymore. In the 2nd division it should be Tienen or Wetteren. In the first division Roeselare.

PS. (Kas Eupen now have an ultra scene (singing in German)). They are top of the league by the way.

We (Ipswich) played RAFC in a friendly a couple of seasons back and I can confirm they are VERY British in terms of their support, clothing, chants, everything.

Where the British-ness ends is all the good bits we've lost from our game - terracing, drinking in the ground and two little blokes in a garden shed in the away end selling a fine selection of Belgian ale. Great place, loved my visit there and well worth a trip as a glimpse of what British football could be without the shackles of authority that bound our game.