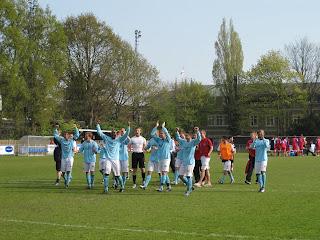 - click on photos to enlarge image -
Now I know how Liverpool and Fulham felt last week. Talk about an "arduous" journey to Hampton for this, the last game of the regular Conference South season. Cynical Dave, Big Deaks and I had to walk (walk!) to Brighton Station. Board a train to Clapham Junction before changing trains (changing trains!) to get to Hampton. We then had to walk (yet again) to the Beveree, home to Hampton and Richmond Borough FC. I'm exhausted just thinking about it again.

It was 1hr 34minutes that we certainly won't be getting back. If you've ever experienced an equally epic journey to a football match then feel free to chip in on the comments section underneath this article. No pain, no gain though as they say. We simply had to be there for this one. If Lewes were to win this they'd avoid relegation, anything less and we'd have to rely on Worcester not winning against Eastleigh. There were lots of other permutations which I won't bore you with - yet.

For the price of a seat at Stamford Bridge, EFW sponsored the matchball. In return we were granted free entry, beer, food and the chance to hobnob around in the boardroom for the day. Oh, did I mention our friends from Hampton had laid on a beach party for the day? They had. It was hard not to let out a little wee of excitement. This match had everything going for it. What could possibly go wrong?

EFW has a bit of history with Hampton which you can read about HERE and THERE. So we were amongst friends as we pulled up to the ground, following a swift bevington or three in the Worlds End pub down the road. Friends from both teams that is. All season the EFW team has made up the vast majority of the away support but today over 150 travelling Rooks had swooped down on TW12. 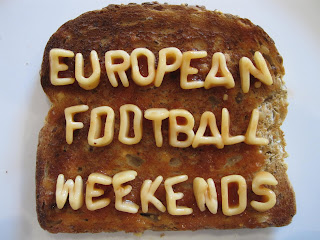 I even had my lucky pre-match meal. 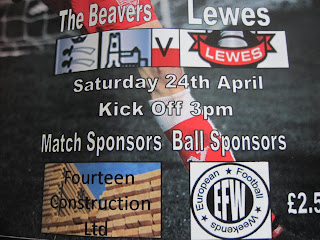 A warm welcome to today's match ball sponsors. Oh, it's us. 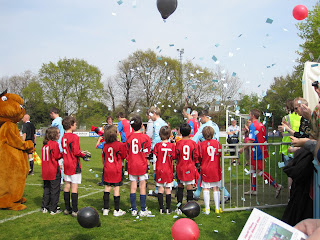 The teams enter the pitch to an Argentina '78 type ticker tape reception. 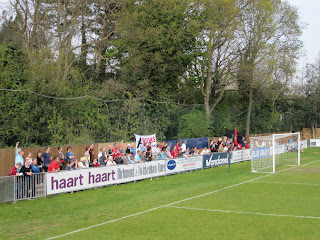 Biggest away support for Lewes for two years. The other two and half thousand were at the bar. 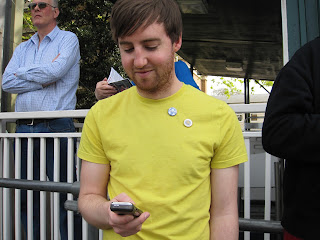 Not much occurred on the pitch during an understandably cagey first half. Off it fans used various social networking methods to find out how Worcester were getting on. 0-1 to Eastleigh (relax), then 1-1 (tense up again), then 2-1 Worcester (panic).
Cue half time and a chance to relax in the boardroom over a cup of tea served up by Alan Devonshire's wife. Vice President Elwyn Edmunds entertained the troops with a string of gags and swipe at Sir Stanley Matthews - no left foot apparently. News from Worcester meant that as things stood, the Rooks were going down. Time for an emergency custard cream.
I'm not saying my words in the shells of the home board of Directors had anything to do with events on the pitch but before you could say "Dan'll Fix It" Lewes had scored twice within five minutes of the restart. 19 goal Joe Keehan and on loan sensation Rob Gradwell both scored causing pandemonium amongst the visiting support. Lawyers should note I'm joking of course. I had coffee not tea. 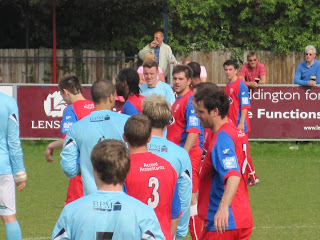 Anyone for rugby? Man with bald head (at top of photo) has a quick ciggie before throwing the ball back into the line-out. 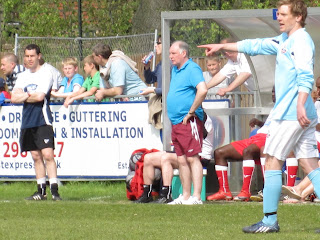 Look! I told you, it's him. It's actual Alan Devonshire. 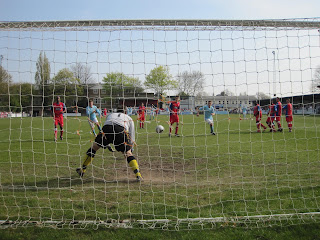 Back of the (patched up) net. 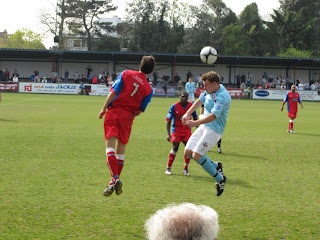 What on earth is that on the pitch?
So 1-2 to Lewes and that is how it finished they pulled one back just play with our nerves one last time*. *Actually, for a full explanation on their goal, have a look at the comments section below. Just as well because Worcester also won (4-1). It was hard to get all misty eyed as fans and players celebrated like it was 1999. The win meant Lewes had gained 13 points from the last six matches. A run that included two away wins having previously not won on the road all chuffing season. It was genuinely a great escape. That will be two great escapes in 2009/10 having survived a winding up order earlier in the campaign. And relax.
Back in the boardroom, living legend Alan Simpson told stories about Brian Clough and Jimmy Greaves over a few glasses of red wine and Big Deaks and Cynical Dave let the match officials have their cake and eat it without giving them an ear bashing for once. Then we joined the masses in the clubhouse for a battleships worth of beer. Mr Fuller got an exclusive chat with his hero Alan Devonshire and all was well with the world.
And so the curtain came down on The Rooks Conference South season. One in which I've brought you reports on the road from *deep breath* Braintree, St Albans, Bromley, Leatherhead, Wealdstone, Weston-Super-Mare, Eastleigh, Maidenhead, Staines, Kidderminster, Weymouth, Basingstoke, Bishop's Stortford and now Hampton and Richmond. I hope that some of the magic of following Lewes has come across, even if you've no interest in the team. Enormous thanks to Big Deaks, Cynical Dave and Stuart Fuller for providing the funnies, everybody we've met on the way and to the LFC management duo of Steve Ibbitson and Jason Hopkinson who deserve the last word for doing it all for free and with a smile. Cheers!

Before we go. Lets do it shall we. Lets relive the moment that Lewes FC defied all the odds and stayed up. Pull up a chair Lewes fans as I take you through it... 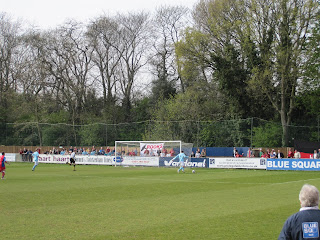 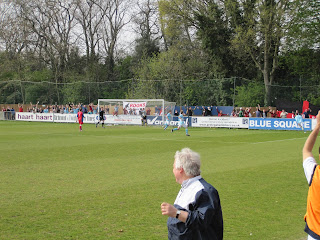 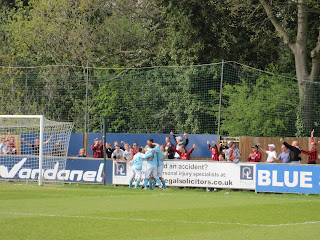 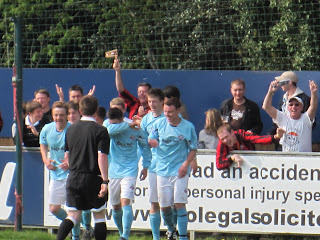 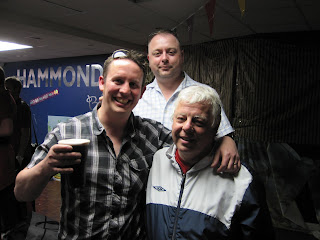 My hero! Mr Fuller looks on as Danny salutes his hero Ibbo with a pint.
For more photos from the day CLICK ME

The Ball is Round report
- Feel free to comment below -

Email ThisBlogThis!Share to TwitterShare to FacebookShare to Pinterest
Labels: Conference South, Hampton and Richmond Borough, Lewes FC, We've only gone and done it

I never thought we would go down, or at least we didn't deserve to go down. What a great day out though !! I'm so glad it's away games at places like Hampton & Richmond, next year, rather than Hornchurch and Maidstone (no disrespect to them of course).

Credit to our fantastic little club (LEWES FC) that were on the brink of extinction not so long ago and now a club staying in the Blue Square South. BRILLIANT!!!

Cheers for the Lewes and Ultra pieces, as well as everything else you've done, through out the season, Danny. They've been great !! EFW and the ball is round another thing great about Lewes FC.

Thanks Ali, very much appreciated.

Can I let you all into a little secret? I only found out it was 1-2 and not 0-2 when the Lewes kitman texted me this morning after I'd originally posted up this report.

As it was a warm day and the pints were flowing quite nicely, midway through the second half, I had to pay a visit to the latrines. In doing so I missed the Hampton goal. Only nobody mentioned it when I returned to the terrace and there was no giant electronic scoreboard to let me know what had occurred.

Thinking back, I was the most relaxed person in the away end towards the end of the match. As the players wasted time taking the ball to the corners and the fans whistled away - I was thinking what's all the fuss about lads. Relax. We're two up here. What can go wrong now etc

Most embarrassing moment in football Lasty? I think so. Don't tell anyone eh ;-)

As you know our day didnt go plan !!

On the bright side, hopefully we get an away day to Lewes next year.

It is very helpful guidelines for me, I expect you will share this type of tips in future carry on

I recently came across your blog and have been reading along. I don't know what to say except that I have enjoyed reading. Nice blog.I will keep visiting this blog very often.Dissertation Help|Custom Dissertation

hmm ;) I must appreciate you for the post you have shared. . I really like it. . thank you for sharing :)
UK Dissertation Help

Be fast to browse the newest styles and lots of affordable outfits and Nike oxygen Max and women's merchandise is not an daily affair, for that reason that in the stress of modern day time girls ordinarily do not possess a complete great offer time and vitality to go buying by means of countless many style malls, and look at special fees will make you exhausted, so which you can acquire a satisfactory goods, call up for to devote lots of time, the show up of on collection buying significantly minimizing the inconvenience of this, now you not just can every one of the sudden go to to lots of goods Nike Air Max Shoes .

Credit to our fantastic little club

I saw really much worthwhile info in this post!

uggs clearance Even so, when you were being to show significant a fast search for on the world wide web using pretty good to uncover by yourself some sort of a couple on a component of the purchase price you have to provide for him or her practically .On the list of leading factors it is best to target as soon as Uggs Outlet thinking of procurement some sort of a couple connected with lessened by almost any web page is usually which the cost are usually now being encouraged seriously isn't to help beneficial for being sincere, possibly be alerted you will probably find by yourself specifically choosing a ugg boots clearance a couple connected with counterfeited or maybe spurious shoes as a substitute.

Blogs are so informative where we get lots of information on any topic. Nice job keep it up!!
http://zsimpsons.com/

Your article is very informative. You have written it very well. I have bookmarked you website. Thanks for sharing.
dissertation writing services in uk

I have been visiting your website for many days and I have learnt a lot from it. I appreciate your work. You have good command on topics. It helped me a lot in my research. I have bookmarked your website. Thanks.

Absolutely fantastic topic! Great blog. Thanks for taking the time and writing this. please continue.

Your post is excellent. I feel like reading it again and again. I have been searching for it for many days. I will come again to see new updates.
essay help