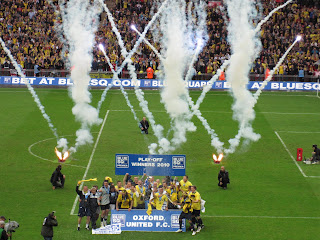 - click on photos to enlarge image -
Squeaky bum time in the Football Conference and a chance for either Oxford United or York City to claim the last available place in League Two. The Conference play-off final is fast becoming our favourite day of the year here at EFW. And that isn't just because we're afforded a Wembley Stadium press pass for the day either. Ok, it's a fair cop - that's exactly the reason.

Little did Petula Clark know that when she penned 'I will follow' in the 60s it would turn into a terrace classic some 50 years later. It has and its spawned a monster. A monster so big that once you hear it it'll be in your head all bloody day. York City's Ultras (as previously featured on these pages) the Jorvik Reds were once again the pioneers in England and have been airing this song for a while. Don't worry, it's coming to a ground near you next season.

Oxford United are the best supported club in the Conference both home and away. Their ultras were formerly known as the Giallo Esercito (Italian for Yellow Army) but have since simplified their name to the Oxford Ultras. Although fewer in number than York, they've been a growing influence since they were formed midway through the 2008/09 season. On matchdays at home they gather at the back of the Oxford Mail Stand and at away games, well, I'll let this video do the talking:

Sadly, adopted strictures from the men in suits don't allow for any such thing at the home of football. The two sets of ultras knew beforehand that they weren't allowed to take anything resembling "fun" into the stadium and as such they concentrated their efforts on the vocal side of things to get behind their respective teams.
Over 28,000 Dundee United fans had turned Hampden Park into a sea of orange in the Scottish Cup Final the day before this match. Oxford United went one better. Actually, they went several thousand better. Over 30,000 U's fans were inside Wembley and they'd left a sold out club shop back at their 3-sided Kassam Stadium. They'd even sold 500 yellow sponge hands according to the 16-page pull-out in the Oxford Mail. They were known as foam hands in my day.
I'm fairly new to this press lounge lark. Unlike my colleague Mr Fuller who - unhappy with the selection of sarnies on offer - sent the chef scurrying back into the kitchen for something other than 'egg mayo'. Their most difficult customer since Mark Lawrenson by all accounts. Inside the press box, we were sat next to The Guardian Chief Football Writer Paul Doyle. A bit ironic after I'd interviewed Sid Lowe and Barry Glendenning from the same organ recently. Brilliant I thought, he could write a proper match report and I could sit back and relax.

The only time I can recall a period of silence from the crowd inside Wembley occurred before the game when once again they insisted on wheeling out opera singer Martin Toal. It was 15 minutes before the match, the crowd were bubbling and wanting to sing their songs and yet, we're continually subjected to this chap, brilliant within his field I'm sure but not what we want at a football match. A football match Wembley. That's what you were built for. Get to the back of the queue opera singers. And you Muse. And American Football (ok that's enough - Ed).

The match was an absolute belter. Normally, days out like these are spoilt by the actual 90 minutes of football - not today. Oxford took the lead with a couple of quality goals. Goals that nearly burst my right ear drum thanks to the deafening noise created by the U's fans. Yellow and blue flags danced furiously and lung busting versions of "Yellows" and more ambitiously, lusty versions of "Come On You Yellows" bounced around the stadium. What could possibly go wrong now they thought. 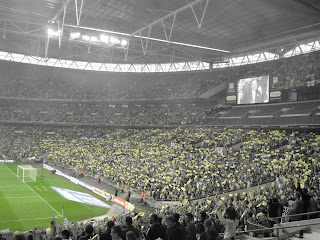 Jimmy Jimmy. Jim Smith and Jim Rosenthal occupy the big screen as a 'Wall of Yellow' fills Wembley.
Just before half time Ryan Clarke's world collapsed around his ears. The player of the season for Oxford ensured that James Nesbitt's agent will once again be commissioning another of his "hilarious" footballing bloopers DVDs. In came a fairly innocuous York City cross, up popped Clarke for a routine catch, flapped at it and whoops - into the net in went. 2-1 at half time. Initially, I thought he must have been barged into the net like Steve Sherwood of Watford who felt the brunt of Andy Gray in the 1984 FA Cup final. Not a bit of it. He'd goosed it up. Game on. 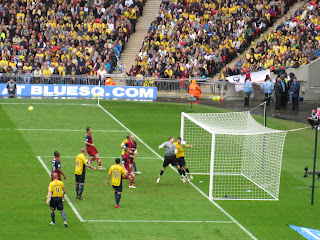 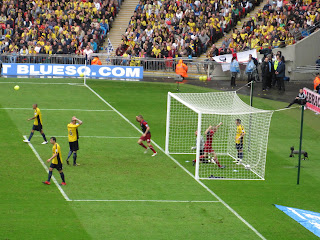 York are back in it. 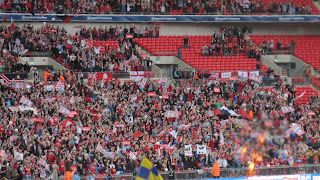 Jorvik Reds momentarily delighted.
Normally, I'd have a pint at half time but not today. It was luxury biscuits with chocolate and cream, coffee, moisturiser and the best hand towels in Europe in the bogs (so that's where the budget went - Ed) and a quick catch up with the Twenty20 where England appeared to be on the verge of giving the Aussies a lesson in cricket. England World Champs? Surely not.

As it was Alfie Potter sent the Oxford fans into ecstasy and his team into League Two with a goal that I will always remember. Why is that? Well, I found the video function on my camera, switched it on for the first time and hey presto:

Off to the post match press conference we went. Oxford gaffer Chris Wilder stole the show in there. He is still bitter about the 5pts United were deducted last season. Talked additionally about how it annoys him that fans think they've got a big budget and put "Your Lutons and your Oxfords" in the same sentence. And then went on about "Your Morecambes and Your Dagenhams next season". Asked how he was going to celebrate he said "Anyone who knows me will tell you I'll rip the arse out of this for two weeks". Everyone laughed.

There was a bizarre end to our afternoon. Mr Fuller and I got locked inside the stadium with seemingly every door locked and no escape. We'd been fannying around for a bit - who wouldn't when given the virtual freedom of Wembley - but this was ridiculous. I can think of worse places to spend the night. It wasn't as if we were going to ruin the turf by pitching up the EFW tent on the pitch. As it was, after what seemed like a dogs age, we were marched out past the team coaches by security along with some of the bemused staff who'd also found themselves locked in. In fairness, it was better than the Wembley Tour. Cheers! 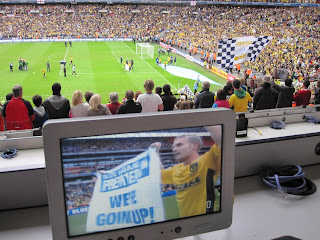 Not a bad little view for EFW. 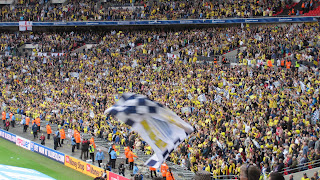 Love lift us up where we belong. 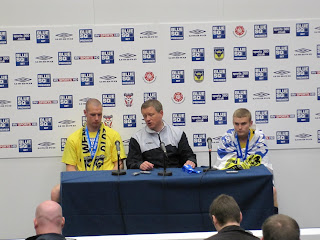 "Anyone who knows me will tell you I'll rip the arse out of this for weeks" Wild Wilder in the press conference. 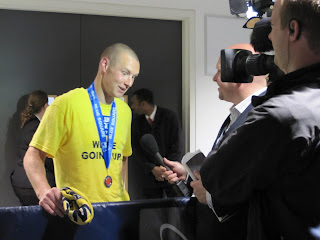 Top scorer AND appearing on EFW. What's not to like..

- For lots more photos of the day CLICK ME -

The Ball is Round report from Mr Fuller

*Feel free to comment below*
Posted by Danny Last at 12:31

Love the report. Love the vids. Love football. Love you. What's not to love? YELLOWS!!!!

1. There is an amusing video involving a rather strange goal celebration from the match here:

2. When Oxford gaffer Chris Wilder told us he was going 'on one' for two weeks, he wasn't joking. BBC Radio Five Live were trying to contact him all day today but he was.....in bed with a hangover. Good lad.

Greatest day of my life bar none. Love the write-up.