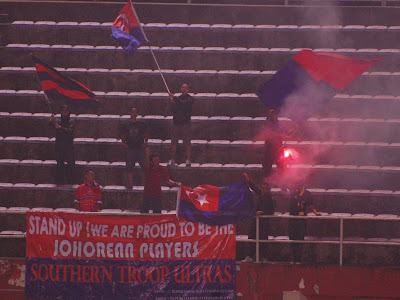 Asian Football Weekends
Antony from Jakarta Casual takes EFW to both Singapore and Malaysia as we dip our first toe into the Asian football scene...
Remember that old adage when visiting a ground for the first time? Come out the station and follow the crowds? Don’t work in Singapore. Follow the crowds in Singapore and you’ll likely end up in a shopping
mall.
Singaporeans haven’t really taken to football. Well, they have taken to football big time, you’ll lose count of the Manchester United and Liverpool shirts you see, but for them football is a chance to be associated with winners. Losers count for zilch; domestic football counts for less than zilch. On the radar it is there among cockroaches and Malaysian taxi drivers in the popularity stakes. Following your local SLeague team is about as cool as saying you collect used airline chunder bags.
The Singapore match day experience is as squeaky clean and regulated as the country itself. Which makes the deafening music before kick off and at half time so unusual. There’s usually only a few dozen people in the stadium at best of times yet the music is cranked up as loud as possible, on equipment that plainly isn’t up to the task, meaning conversation is all but impossible and distortion fills the air. That’s assuming you even get inside the stadium itself. At Tampines Stadium the ticket office, a rickety desk just inside the stadium, is hard to find. Once you do find it you hand over your 5 dollars and get a ticket from one person. You then hand the ticket to another person who tears off the stub and then you answer a load of questions like what’s in your bag, are you carrying any bottles etc. Let’s put it this way. It’s hardly the most welcoming welcome to a football match but what makes the precautions on incongruous is that there is no bugger there anyway. 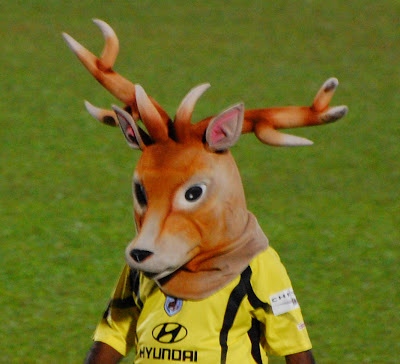 Will this stag do? 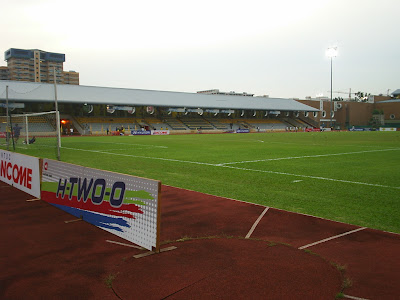 The Tampines Stadium*. *Dreadful name, granted, but we'd also moan if it was called the Red Bull Arena
No programme, no club shop, if you want any souvenirs from the game forget it. Just a cold concrete step to sit on in the main stand and that loud music to while away the time before kick off. Considering Singapore’s success in developing a world class airline and port it does seem odd the football fraternity does nothing to make fans feel welcome when they come to stadium.
So with conversation impossible and nothing to read you sit and listen to the noise. Just before kick off the announcer will race through the team line ups but they won’t mean a thing to the casual visitor unused to the names. Team sheets are available but only in the media area, the rest of the crowd aren’t deemed worthy.
Tampines Rovers 4-1 Tanjong Pagar United
The game itself was between Tampines Rovers and Tanjong Pagar United. The SLeague likes adding United to its club side’s names, in the 12 team division there are fully five Uniteds. Tampines are probably the nearest thing to a glamour club on the island with a fine tradition of success and near success. The recent seasons have seen the trophies dry up as SAFFC have dominated domestically but The Stags, as they are nicknamed, remain hopeful this could be their year and indeed the 4-1 victory over Tanjong Pagar sees them top of the table. 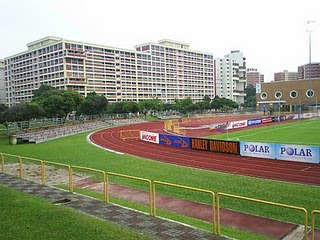 A: Hello, Tamines Estate Agents, Amirtha Speaking. How can I help you?
B: Hi, EFW here, we're interested in buying a flat..... 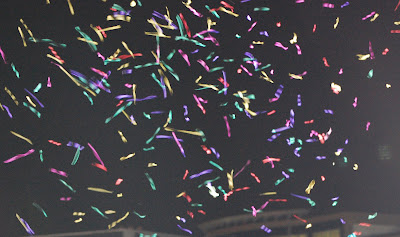 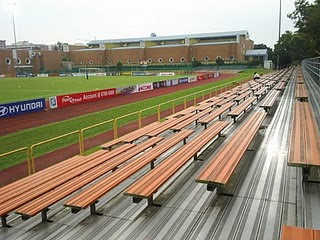 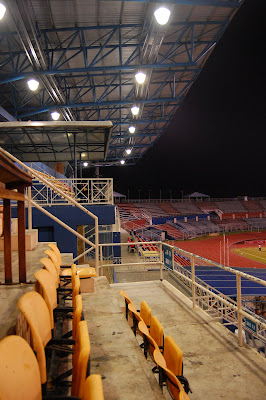 Not a Henry Winter in sight. EFW had the press box all to ourselves 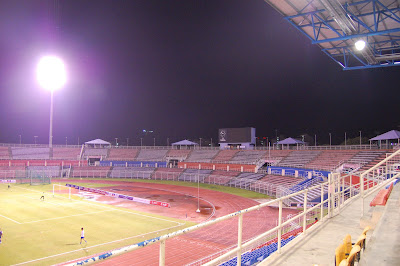 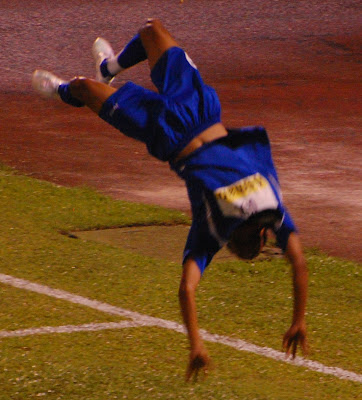 The opposition had fallen head over heels with their new surroundings
Putting aside the monotonous drumming from the handful of PP USM fans the game itself wasn’t too bad. The visitors, who had travelled the length of the Malay Peninsula from Penang played the better football and deserved their 2-1 win.
Despite the awkwardly inconvenient kick off, getting back to Singapore is a breeze as buses keep crossing the border until about 12.30 am. I finally got back to my hotel room about 1 am and in many ways it was a
football experience I remembered from my time back in England. Only warmer. And with passport control!
Two games in two countries in two days with eight goals, missed penalties and less than 500 fans! The football elitists with their English Premier League replica shirts won’t believe me but they were two good games of football with moments of skill mixed in with good old fashioned passion.
Follow Jakarta Casual and European Football Weekends on Twitter
For an offbeat look at Indonesian and South East Asian football from the terraces or the pub - head to the Jakarta Casual website.
- Feel free to comment below -
Posted by Danny Last at 10:39

For a bit more on Tampines Rovers, Kenny Legg from the ever excellent Adventures in Tinpot sneaked in there, once:

So, we wont be seeing an EFW Oktoberfest sampling the "delights" of the S-League any time soon then!