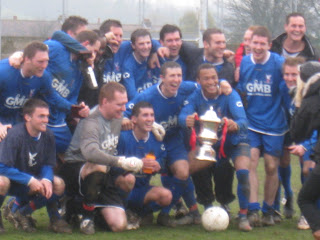 I'll happily wager with anybody that three games of football in a single day constitutes more than merely a 'Good' Friday. Whichever Sussex FA committee member decided to stagger the kick off times of the three County Cup Finals - making it possible to see all three - deserves first dibs on the biscuits at the next annual AGM in my opinion.

For just 20 of your earth pounds, Cynical Dave, Big Deaks and I were able to see three games of football, travel between each venue and see more passion and commitment that one could possibly hope to see on a rain sodden day in West Sussex. Credit crunch!? What credit crunch.

First up was Whitehawk (suburb of Brighton with 'bit of a tasty reputation') versus Horsham (West Sussex market town) YMCA. The match was played at Lancing FC - home to the Sussex Football Association. There is a relatively new stand at Culver Road which was packed to capacity, boosted by a large following from Whitehawk, our adopted team for the day.

Along with the fans of both teams, these sort of days attract a number of - let's call them 'characters'. Welcome to the murky world of groundhopping. We met a guy who is legendary in non-league circles by the name of Wolfy. Wolfy is famous for - take a deep breathe now - not leaving a stadium until he has touched the match ball.

There was some chap there who casually dropped into the conversation that this was ground number 812 (fact) and others who talked of 'hoppers' who had to touch every goal post or corner flag. Their behaviour borders somewhere between funny and disturbing. For the record, it made us laugh (disturbingly so).

Credit to the groundsman that this match ever went ahead in the first place. The goalmouths were no go areas, muddy as you like (Mmm...). Consequently, it wasn't a day for silky skills and as such I fancy this suited Whitehawk. They are a team you'd like in the trenches with you whereas Horsham YMCA were - to my untrained eye - more likely to get you a Coca-Cola skills badge. Whitehawk (trophyless for 15 years) simply wanted this game more and it showed. 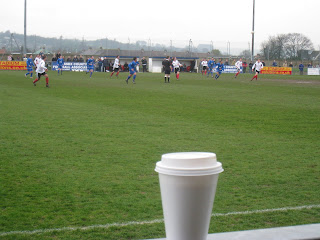 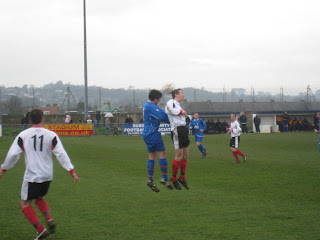 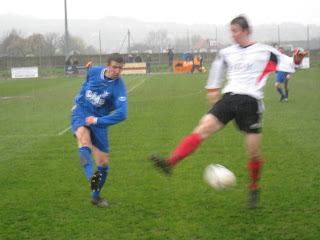 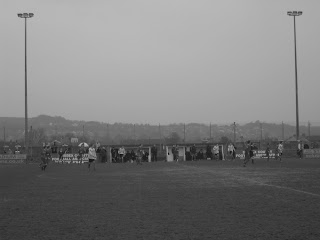 What a grey day.

It was Whitehawk striker Sam Francis big day. He looped in the opener on 12 minutes and played it again in the 65th by heading in another. That would have been it save for an astonishing decision by referee David Spain late on. With ten minutes to go a YM player hoofed the ball out of the ground. This was deemed sufficient enough for Spain to award them a penalty. Fantastic stuff. Muy bien amigo. Anything for a laugh eh!?

"He's hit the ball out of the ground ref" "They are all laughing at you ref" "For F**ks sake what was that for!?" "Loud and clear you are a cu*t ref" The 'respect' campaign was temporarily put on hold whilst the Whitehawk players tried to get their nut around the decision. Tony Manton stroked home the penalty, ten frantic minutes ensued until Spain blew his whistle - this time correctly - and the celebrations could begin. 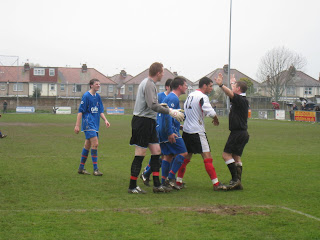 Referee David Spain trying - successfully - to make a name for himself. 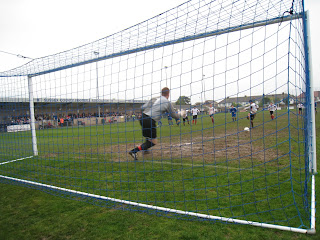 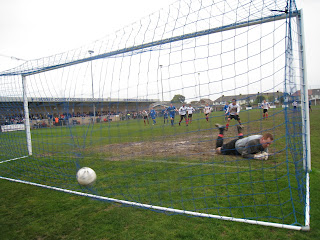 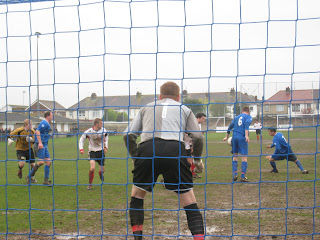 Two goalkeepers in one photo (tick). 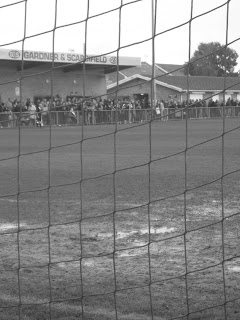 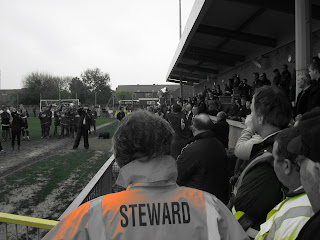 Just before the penalty by the way, Manton had a shot that flew wide and landed behind the goal. This wouldn't normally form part of a match report but what followed was fairly noteworthy. A chap sprinted - like a man possessed - to retrieve the ball. No Easter eggs for guessing that it was our old mate Wolfy complete with Bob Beamon type grin. Mission complete.

So hats at a jaunty angle to Whitehawk for sticking a well deserved trophy in the cabinet and nods of approval to us for being there and only paying £5 for the privilege. Bargain. Next stop Littlehampton - see you in part 2.
Posted by Danny Last at 09:59