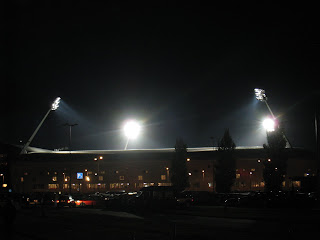 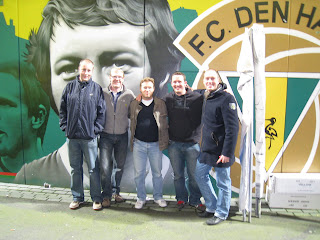 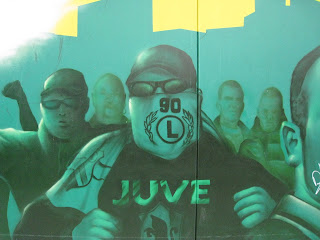 It's murals o'clock around the perimeter wall of the stadium. I think one represents the 'family stand' at Den Haag. 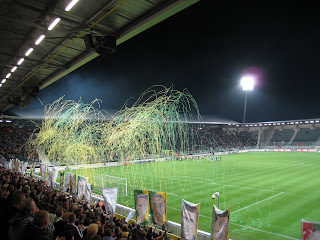 The two teams come out to an Argentina 78 type reception. 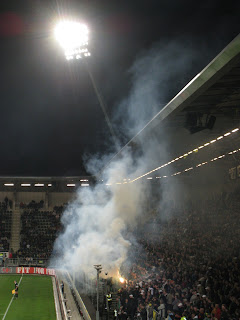 Den Haag fans warm themselves up on what was a fairly chilly night. 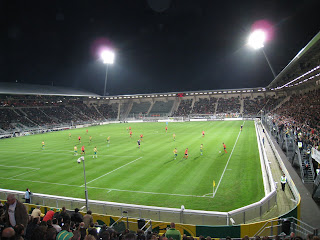 Note the moat around the perimeter and also the empty seats up the other end to the left where the away fans would normally sit. Volendam had a travelling army of 8 fans.
It's unbelievable Jeff!

Accompanying me on this three day footballing extravaganza around the Low Countries were Big Deaks, Martin 'PNE' Baines and Roland Van Puyenbroeck. Can you guess which one was our friend from Belgium!?

Big Deaks has been travelling with me on these fun fests since 1996, Martin is typical of a number of Northerners in that he is happy with a pie and a pint but without the pie. Roland - our friend from Antwerp, Belgium (2 points all round) - is a chap I met through this website which is one of the joys of running it. He pretty much organised the whole trip and in doing so became only the fourth person in history to become a European Football Weekends Gold Member. Not a dry eye in the house when that one was announced I can tell you.

Pleasingly, we were joined on the Euro Star out from St Pancras to Brussels by the cast of Gavin and Stacey which kept us entertained for the two hour journey. Actually, they were a family from Kent who sat opposite us and talked about food for the duration but if you've ever seen the show you'll know what I mean.

From Brussels we hopped on a train to Antwerp and within seconds of dropping our bags in the hotel we were met by Roland and put on a tram to the 'Ten Eeckhove' our first pub of the day. The pub was covered head to toe in Royal Antwerp and other footballing memorabilia. Upon arrival a monster of a man headed towards me and before I could check out the nearest fire exit to run through, he had planted an enormous kiss on my left cheek. This is the way friends of the family are greeted in Antwerp apparently and who was I to argue with this beast!?

Roland had arranged for his mate Jordi to drive us the 90 minutes from Antwerp to The Hague. Jordi turned out to be a star, he is a local policeman in Antwerp but don't let that cloud your judgement, he is one of the lads and no mistake. We stopped off at a service station to fill up on beer and as if that wasn't good enough, we past by our old friends the Feyenoord floodlights at de Kuip en route which produced the first gap in conversation all day.

The trouble is once you cross the border into Holland - aside from the annoying roaming network text from O2 - you find yourself slipping into the voice of an ex-England manager, I think Steve McClaren. For sure people were shniggering at my shpeech, eshpechially after a couple of beersh but hey we should not mock old Schteve. He has had the last laugh and how lucky he is to be living in a windmill in old Enschede.

Normally, getting a ticket for Den Haag is out of the question. Due to a number of problems - namely hooliganism - it's been a closed shop aside from season ticket holders and club card members since they opened their new stadium in 2007. For this game against FC Volendam however, the club decided as an experiment to allow anyone to purchase tickets on the day of the game.

After the predictable rugby scrum for tickets had finished we made our way into the stadium. It had a Fort Knox feel to proceedings. We had to show our passport twice and had our photo's taken by security upon entering the ground. There is a €15,000 fine for running on the pitch at Den Haag which would be mission impossible anyway due to the huge moat surrounding the pitch.

The two teams entered the pitch to an Argentina '78 type reception with confetti launched onto the pitch from the stands. After this precisely nothing happened for 58 minutes. It was turgid. With the air thick with the plumage of marijuana smoke our thoughts turned to the news that Jeff Stelling is set to become the new host of Channel 4's Countdown. Imagine the scenes in the Countdown studio when the single headphone liking, pencil mustachioed contestant Kris 'Kammy' Kamara with his finger in one ear screams with excitement: I have a 12 letter word it's 'UNBELIEVABLE' Jeff'.

Thank the Lord that on 58 minutes, Denners introduced Andre Agassi look-a-like Hursut Meric to proceedings. An expectant fever of emotion replaced the smell of drugs and swept around the stadium. It was clear something special was about to happen.

With his first touch Meric produced a Ricky Villa type run before laying the ball into the path of young Immers who duly lashed in a shot from the edge of the box sending the crowd into an overdue bout of mentalism. After that, Meric could do no wrong and it was no surprise in the 83rd minute when he picked up the ball and effortlessly fashioned a John Barnes v Brazil class of goal that again had the fans dribbling with excitement.

Clearly, Hursut Meric is the greatest player in world football. There must have been a committee meeting of privy board members after the game to establish just why the Mericmeister wasn't not only starting the game but hadn't been awarded the position of player manager years ago.

After his introduction into the match, the stadium rocked and the Den Haag fans finally were deserving of their reputation as some of the most vocal in Holland. At the end - as with most games abroad - the fans and players celebrated as if they'd won the FA Cup. I love this tradition. Note to English teams players: Don't just trudge off with a single hand clap at the end of the game pausing only to change a shirt with the oppo. Celebrate with the fans who've come to support you lads.

Post match we headed back to Antwerp with the sound of Europop blasting out on the car stereo. Safely back, we engaged in a pub crawl of the City working our way through a menu of fine Belgian beers until 4am. Day 1 of 3 had been a success.....NEXT.

Very nice review of our club Den Haag! Actually, last year we did manage to invade the pitch, hence the high punishment...and the family stand is actually on the other side hehe.
cheers
mirko