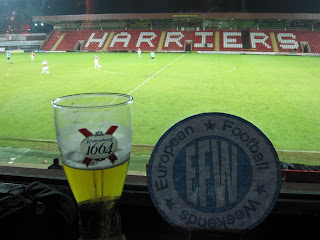 - click on photos to enlarge image -
How many self respecting football fans wouldn't relish a near 400 mile round trip to Kidderminster on a grey, drizzly Tuesday night in January!? Would this be one social gathering which, despite good company, would become painful and require a large dosage of alcohol to relieve the pain?

Don't be daft lad. This was an away day with the Mighty Rooks. This trumped my alternative of a day in the office by a Krypton Factor of 8. I'd been to Aggborough, home of the Harriers, before - 9 years ago to watch Brighton - but little gumption was required to sign up for a return visit.

The romance of the trip didn't quite extend to a 10 hour 4 minute return journey home on the train (including a 5hr stop at Banbury), so Cynical Dave and I broke the habit of a lifetime and hitched a ride on the Lewes FC team coach to the Wyre Forest district of Worcestershire.

Happily, the beers flowed quite freely on the coach amongst the travelling throng of 5 (five!) fans. We were "treated" there and back by a couple films picked by assistant manager Jason Hopkinson. I can safely say that when it comes to crapfilms.com, Jason - who is actually one of the nicest blokes you can meet - deserves a chuffing oscar. To boost morale during the traffic chaos just south of Birmingham, the famous 6-2 New Years Day win over Dover was also shown on the giant plasma screens. What could possibly go wrong?

Upon our arrival at the ground a couple of hours before kick off, we were a) given free match tickets by the players b) welcomed with open arms in the Harriers Arms pub c) shared our bar space with a 6ft harrier bird and d) feeling quite chuffed with life. 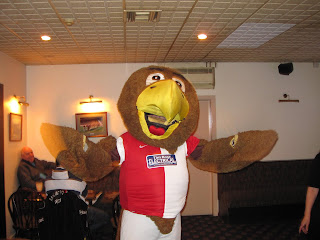 Harry the Harrier joins the EFW team for a pre-match pint and nibbles. 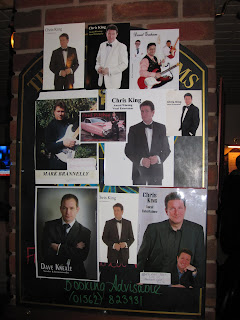 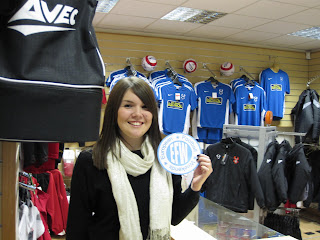 Emily in the Harriers megastore.
As you'll be aware, this isn't really the place to head if you fancy an in depth match report. You can find professional efforts both here and there if you wish. Just briefly, Lewes went 2-0 down in the second half and looked doomed. Then, as if by magic, they fought back liked caged tigers to level at 2-2 before a goal in injury-time by Gavin Caines sent the home side through to the next round. Did I mention this was an FA Trophy 2nd round proper (proper!) match?

Hilariously, the stewards at the ground gave me a ticking off for taking photos. I think they must have mistaken the Aggborough Stadium for the o2 Arena. Talking of the o2 Arena, did you know Jimmy Greaves is playing a gig there? Funny old game Saint. Anyway, as it was freezing cold, I'd been told off and they weren't selling beer anywhere, Cynical Dave and I decided that some drastic action was required. As such - and I don't quite know how this happened - we found ourselves pitched up in the hospitality suite for the second half. Beer on tap, friendly locals and some warm seatage. 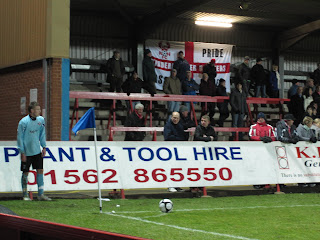 Plant and tool hire in Kidderminster? Not a problem. 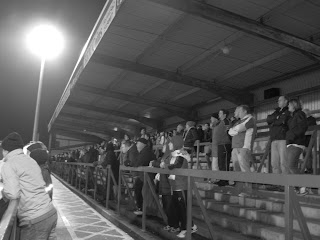 The North Stand packed to the rafters. Well sort of. 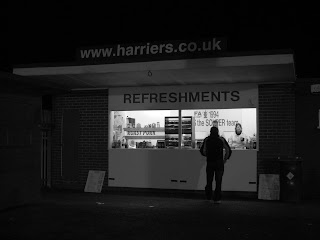 Home made soup and a cottage pie please Betty love. Highly recommended by the way. 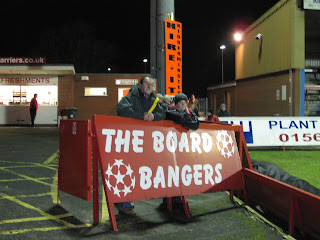 Meet The Board Bangers of DY10. 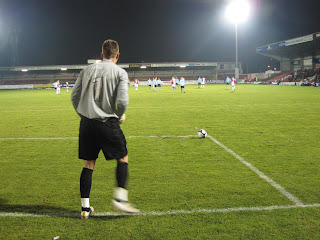 Dean 'Deano' Coleman.
As Lewes were surging forward during the later stages of the match and goals were flying in willy nilly, I plugged in the EFW "happyometer" which registered a record 99%. That came thumping down to a big fat zero when Kiddy stunned us with that last minute goal but hey, good luck to The Harriers. I hope they get to play local rivals Worcester City in the next round. That should be some occasion. Chris King has already been pencilled in for a night at the Harriers Arms should they win that one.

In what is becoming a bit of an EFW tradition, I managed to hijack someone from the home team for an exclusive interview. Is that Parky hot seat still available? If not, I'm sure I read somewhere that Johnathan Ross' Friday night spot is up for grabs. Anyway, until then, here is the result of a chat with Phil from the rather fine Harriers Online website:

What is the best thing about supporting Kiddy? It's local, I know many of the fans - which is something you won't find with Premiership/Championship clubs - and it makes you feel good inside when they win.

And the worst? When the many Man Yoo (sic) and lifelong Chelsea fans around here laugh and tell me to support a real team. The difference is, I get out of my seat to support my team.

What has made you laugh in your times of following The Harriers? I don't think I've ever found or seen anything funny while watching the team but you always have a laugh with the lads before the match over a pint or two. Especially when the pub, beer and the weather is good. the Railway Vue at Histon is one we look forwards to because we always take a good crowd there and have a good laugh.

Who are you rivals? I class Hereford, Shrewsbury and Cheltenham as rivals but some older fans hark back to the days of playing Worcester City and Bromsgrove and can't wait to play them again. One day, far far away, Worcester might be but never Bromsgrove.

What do you prefer: Football League or Non-League? Football League to be honest because of the bigger crowds, teams and stadiums. Compare going to somewhere like Notts County with visits to the like of Tamworth and Kettering where we have to go to now. (Give me Tamworth any day of the week - Ed).

Can you sum up Kidderminster in a Tweet of less than 140 characters? Harriers. A team once amongst the elite of non-league footie but now just middling along as an also ran. Got potential though.

We'd already warmed to Phil but his pièce de résistance was this pub guide to Kidderminster which he's put together for those of us who like a beer with our football. Of that little lot, he told us that the Harriers Arms (which we can confirm) and the King & Castle are by far the best. Cheers!

All told, it was quite a surreal day out. We got home at 2am having been dumped out of the cup but yet again, I think Lewes FC emerged from the day with a bit of credit. Same again next year? Where do we sign.

You just missed me on the Tool Hire pic. Scroll to the right where the girl in the white coat is and I'm next to her Dad.

Kenny - the soup and the cottage pie were the talk of the EFW Facebook pages this week. Rightly famous!

Harriers9 - I have another photo which you might be in from that same area. I can send it over to you if you like!?

By the way Harriers9 - What is that 'board bangers' sign all about?

Residing on the continent, I've only been to one away match with Lewes so far. But reading these reports, I think I have to schedule any future trips to England to include a Lewes match or two. Keep up the good work!

Actually, there is very good away game coming up on 30th Jan at Weymouth.

The Board Bangers are a group of fans that, erm, bang the board when we score etc, etc.
they were the sponsors of Mark Yates and will be the sponsor of the new manager too.

They got that board done because they helped out painting the ground a couple of years ago and that was their reward.

For most Portuguese football fans, the brand "FC Porto" is a synonym of corruption. The leader of the club for over 25 years, Mr. Pinto da Costa, is well known for not only being the most successful executive in the football world, but also because of the corruption scandals, which seem to be constantly associated with him


Not long ago, Platini threatened to ban FC Porto from the Champions League because of the same scandal, which brought many referees and executives to the court. Nonetheless, FCP did not get the ban and Platini became a laughing stock in Portugal.

Not even the Portuguese courts were able to punish FC Porto's chairman, since the phone records that proved his involvement in the major corruptions scandal were not accepted as proof by the court.

Today the same phone taps, which were overruled by the court house, were posted on YouTube. The content is just a confirmation of what was already known by the general public.

The tapes include mostly talks between the Portuguese executive and major characters of the Portuguese refereeing scene. According to the conversations Pinto da Costa literally handpicked the officials responsible for FC Porto's fixtures.

Bribes are also a topic. Money is not specifically mentioned, but nonetheless prostitution is broadly discussed under the term "fruit" (prostitutes) and the term "milk and coffee" (which refers to Latin-Brazilian prostitutes), which were offered to referees.

There is also another tape in which the Portuguese executive talks to the then-President of the Portuguese League, in order to ask him for a favor in a disciplinary case against Liedson for elbowing a FC Porto player.

One of the most scandalous tapes for international fans is the one which involves Deco, the famous midfield ace.

The Portuguese midfielder had thrown his boot at a referee after being sent off. Angry about this decision, Pinto da Costa asked a famous journal editor to publish an interview with Deco, in which the player would state that he would reconsider his place in the national team if he was to be punished for his actions against the referee.

The forged interview was carefully prepared, as was the hearing at the League's Disciplinary Committee. Deco carefully followed the instructions of FC Porto's chairman and was not punished by the league - a true scandal.

Now, Portugal eagerly awaits the outcome of this situation. Pinto da Costa has already filed a law suit concerning the leaked tapes. The Portuguese General Attorney is following the situation closely, trying to find those responsible for the publishing of those tapes, since they were held under a confidential status.

However, the question remains: How could Pinto da Costa not have been punished by the legal authorities?

Many suspect that Pinto da Costa also has some influence within the justice system, which is not too far-fetched. He has enjoyed some very intimate relationships with many famous politicians who still have a large influence in the legal system.

A "Godfather" plot in Portuguese.

Here are the links.

I doubt most of you understand the Portuguese, even with subs, but still. Here it is.

Wow! It's all happening at FC Porto. Now, here's a challenge:

Can anyone find a link between FC Porto and either Kidderminster Harriers or Lewes? You've got the time it takes for the board to revolve.

i like your blog.i am from turkey.my blog is european stadiums.

here is my blog:
http://ikimaratonikikale.blogspot.com/

Loving the photo of that bird. Is it on Twitter!?

And as for your link between Porto and Lewes, how about this one...both of them adopted their current club colours in 1893

I have visted this site and got lots of information than that of i visited before a month.