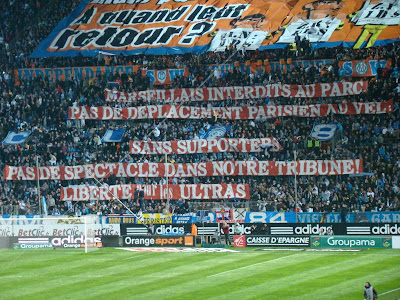 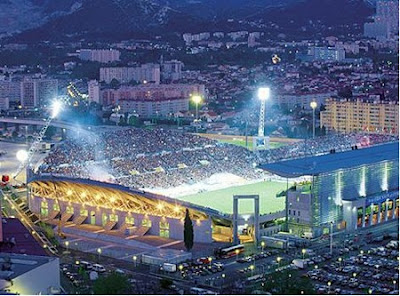 Stepping outside, we see the bullet holes from the Second World War. The cathedral was crucial in liberating Marseille: the North African troops knew a passage into the building and up to the roof, from which the French Army could rout the surrounding Nazis. We step around the corner: we can see one stand at the Stade Vélodrome, L’OM’s stadium, built in 1937 for the 1938 World Cup, the tournament overshadowed by the ascendancy of Fascism – winners Italy played their first round and semi final matches here, switching to Paris – and black shirts – for their quarter final victory over France.
Fréd leaves to watch the Qatar Moto GP, and I head to the stadium. I enter what calls itself the Musée L’OM: there are handprints belonging to a number of the club’s greats. I see prints belonging to Jules Dewaquez, star of the 1926 and 1927 Coupe de France winning teams, Algerian defender Jean-Louis Hodoul and others, and a few small exhibits commemorating L’OM’s back-to-back titles of 1971 and 1972, then the golden age of the late eighties and early nineties. The small ‘musée’ feels like a ruse to tempt me into another OM Boutique, and the exhibit celebrating the Champions League triumph is obscured by boxes of DVDs featuring L'OM's finest victories, priced at 25 euros.
I meet Frédérique’s friend Laetitia three hours before kick-off: we can already see supporters stood on the Virage Nord, which hosts L'OM's feared Ultras. Drinking in a bustling crowd of fans, she says she’s not optimistic about retaining the title – she expects it to go to Lille, who beat L’OM in their last home match. A win will at least knock PSG out of the race: like everyone else here, she desperately wants L’OM to transcend the disappointment of their Champions League exit and beat their hated rivals.
I take my place in the Tribune Ganay Haut, the stand I saw from the Notre Dame de la Garde. None of the terraces have roofs, and I can see some of Marseille’s skyscrapers over the tops of the Virages Nord and Sud. These stands gradually fill, apart from a small section in the Nord occupied by police, where the away fans would usually be. Without the opposing support, the Ultras have nowhere to direct their anger – until PSG come out to train, when the whistles and boos are intense.
PSG’s players head back down the tunnel, and the Marseillais concentrate on their own club. The Nord fly flags of Argentina, to celebrate playmaker Lucho González and former PSG defender Gabriel Heinze (who swore he’d never join L’OM but did after Manchester United blocked his desired switch to Liverpool) and Ghana, in support of Abedi Pelé’s sons Jordan and André Ayew, both in the squad for Le Classique.
Just before kick-off, the Nord crowd raise placards, covering the Virage with L’OM's badge: after seventies legend Josip Skoblar joins the captains on the pitch, there is a request for a minute’s silence for the Japanese earthquake and tsunami victims. It’s not impeccably observed, but the Nord Ultras cover the sky blue L’OM badge with red, forming the flag of Japan – a moving, kind-hearted tribute from a group usually noted for their fierce hostility.
After an open start, L’OM’s playmaker Mathieu Valbuena is fouled on the edge of PSG’s area. Heinze wins the argument over who will take the free kick, and curls a perfect shot past Grégory Coupet to put the home side ahead. Nearly full, the stadium erupts: PSG hurriedly restart. The veteran Ludovic Giuly and Brazilian playmaker Nenê threaten, and after Nenê hits the post following comical L’OM defending, PSG midfielder Clement Chantôme follows up to score. 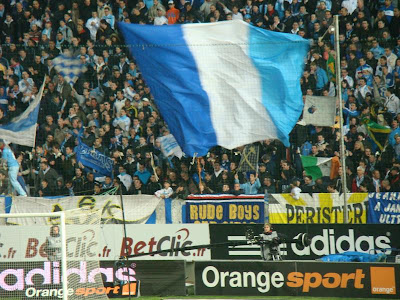 This is met with a strange silence. The PSG players pause, stare at the empty space next to the Nord’s quietly furious Ultras, and then race over to embrace manager Antoine Kombouaré. L’OM press hard to restore their lead: on 37 minutes, striker André-Pierre Gignac, the player in this side whom I find most intriguing, crosses for André Ayew to head the champions into the lead. Gignac, a man proud of his Romani gypsy heritage who joined L’OM for a huge fee in the summer despite his disappointing part in France’s World Cup debacle, has been struggling, but is slowly winning over the crowd after three recent goals: this is his only contribution, however, and during a goalless second half, he is substituted.
L’OM unnerve their fans with some careless defending – new acquisition Rod Fanni is especially lax at times – but they hold on for their thirtieth victory over PSG, which leaves them four points behind Lille. Jean-Paul Sartre famously said that in football, everything is complicated by the presence of an opponent: certainly for the fans and police involved with Le Classique, much is simplified by their absence. L'OM have proved repeatedly over the years that their greatest enemy is themselves, but for now, they have succeeded, and I walk away with 50,000 others, happy that the Provence has asserted itself over the capital.
Thanks to Commando Ultra '84 for the photos
You can follow both Juliet Jacques and European Football Weekends on Twitter
You can read more of Juliet's work at The Guardian.

Really enjoyed this article. One of my "to do"-games this.