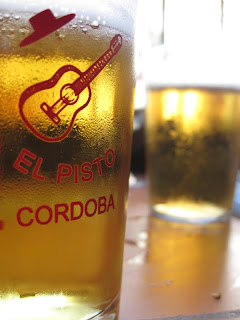 Cór blimey, guv'nor
Córdoba 1-0 Numancia (10:10:11)
We alighted the train before it chugged back out of Córdoba Central, onto the cobbled paths and into the heat of the morning. A day of sightseeing, interspersed with cañas and tapas, was on the agenda. But what was this catching my eye and shining like a beacon: a match day poster for a game? Córdoba v Numancia to be played this very evening? Yes sir. I'd only gone and done it again; landed in a foreign city on the day of a match, and with eight hours to spare until kick-off. You simply couldn't make it up.

I won't bore you with those hours spent sightseeing, there'll be 2000 words on Andalucia's most spectacular structure, the Mezquita over on our sister site 'European Cathedral Weekends' later in the week. The flowers and that were indeed lovely, but for now it was time us - my wife and I - to wave a little white hanky and give in to the culinary delights of the city and dive head first into some of those inviting Bodegas (wineries).

Aside from the obvious 'dos cañas por favor' the Spanish phrase I'd urge you to learn would be 'Que es tipico de la casa?' (what is your [food] speciality). Armed with that winning vocabulary, you won't go far wrong, not just here, but in all of Spain.

The legendary Bar Santos seemed as good a place as any to kick-off our gastronomic highlights package. Typical of this gaff is the tortilla de patata. They were roughly the size of a large hat and, fittingly, ours was served up by a chap called Jesus. Did Jesus want to appear on EFW - photographed with one of his prized trophies? You bet he did .... 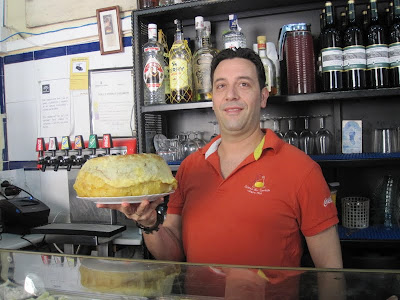 Jesus and his prize-winning Spanish omelette, tick.
Next up we'd been recommended to grab a sought after seat at the "Casa El Pisto" Taberna San Miguel Bar.But seeing as that was a full four minute walk away, we called in for an intermediate swifty in Bar Correos which was in full swing with Cordoboses chewing the fat over an ice cold beer.  Man alive, when it came, Casa El Pisto was worth the wait. After a couple of cañas I noticed a jug of something rather splendid on the bar. The local Moriles wine and I were about to have words. It was extremely moorish on a very hot day, and they began to sail down the hatch rather freely. Like many bars in the area, it was a shrine to bullfighting. Feeling well feed, not to mention a little merry, we called for the owners - Pepe y Lola - to pose for a photo. Well, Ricky 'chuffing' Stein gives the staff the recognition they deserve, doesn't he? 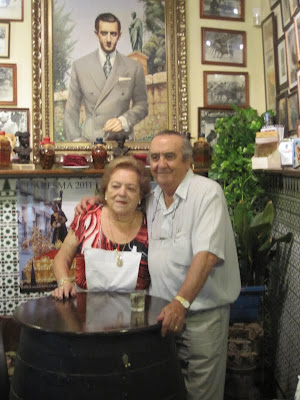 Pepe y Lola - I doff my sombrero to you both. Legends.
I've just been reminded that during my deep and meaningful conversation with Pepe, I'd told him "Tu marido es una cocinera fantastica," (Your husband is a fantastic cook). I meant his mujer (wife). Whoops. We all laughed. And he gave us a free glass of Moriles.
Onto the Taberna Salinas with a spring in our step. This place had been serving punters since 1879. Berenjenas con miel (aubergine with honey) was ordered, downed, and saluted. Who knew a trip to a Segunda Divsion match could be so much fun.
Just when we thought 'nothing could go wrong now', Tony 'reprehensible bag of feces' Blair reared his unwanted head. He'd previously paid a visit to the Bodega Campos, and as a result everything in the place had been upped in price. We boycotted the food in protest. Out the back, there were rows of oak barrels which had been signed by local and international celebrities. Blair's signed barrel sat atop that of a chap called, Curro Romero. Having heard a bit about Romero, I know who I'd rather share a beer with. He's a real character; a bullfighter obsessed with Real Betis, who on the odd occasion would stroll out into the bullring and declare that he couldn't be bothered with it all. The crowd didn't mind; some weeks he was good others, he was a disaster. There is a statue of him outside the bullring in Sevilla. I didn't see one of Tony Blair there last time I looked. 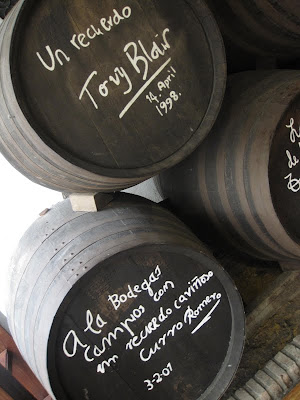 Tony Blair 0 Curro Romero 1
After one for the road in Regadena with its 21 flower pots hanging on its outside wall, it was time to negotiate the 36 degree heat and walk the ten minutes to the stadium. "Tu eres Danny de European Football Weekends," called a voice in the club's offices before I'd even opened my mouth. The staff there must have been briefed to expect an English lunatic with a bright red face and a beaming smile. They handed me over a folder with some information about the club, and a little press pass with my name on it. Good old life. 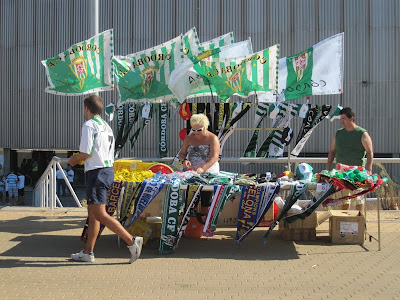 You'll find one of these trestle tables outside every Spanish football ground. 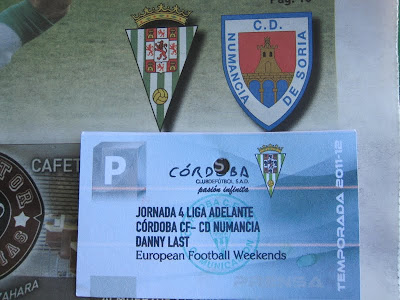 Willy Wonka's golden ticket
My first impression of the ground was that it looked to have about 15,000 seats too many. There was nobody inside just minutes from the start. And then, like in most Spanish grounds, there was a late rush and 5,000 fans strolled in with a minute to go. Small knots of supporters huddled together in what little shade was available. A group of around 60 or so ultras tried to raise an atmosphere in one corner of the ground, and Numancia, for their part, had brought with them 1 (one) travelling supporter.
The referee resisted booking anyone until the 14th minute; then, after the home centre forward Pinto had rolled a country mile after being clipped on his heels, the floodgates opened. Eleven players received a yellow card after that. I do get the impression that referees in Spain love booking players. Whatever, when there's not much to get excited about in terms of tiqui-taca it makes for thunderously good entertainment.
No goals at half time, so I was left to ponder what it would be like to fanny around a football stadium dressed as a crocodile in sweltering conditions - like the Córdoba club mascot does every other week. Better than going down the gym, I concluded. 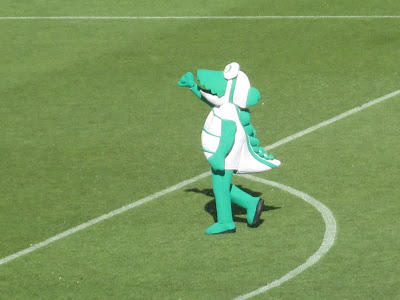 The club mascot acknowledges the fans with a friendly gesture. 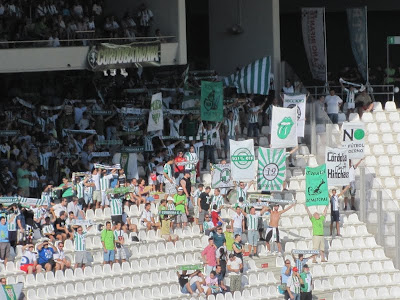 Blanco y verde, blanco y verde .... Córdoba
I'm no Michael Cox of Zonal Marking. Whilst he busies himself working out the formations of teams - clocking up one million hits in the process - I can't help but look around stadiums and giggle at women in hats made out of the matchday programme. I know this isn't possibly the best news in terms of my career, but boy does it make me happy. Having said that, even I could tell you that the single best player on the pitch today was Córdoba's Brazilian talisman, Charles. Caaaarlos, Caaaaarlos sang the fans. He missed a penalty; nice height for the goalkeeper and all that. A few minutes later he made amends with a 'smasheroo' from a fair distance into the bottom left hand corner of the net. 1-0. I'd suspected that Numancia's right back was there for the taking - heh heh ... just kidding, Michael. 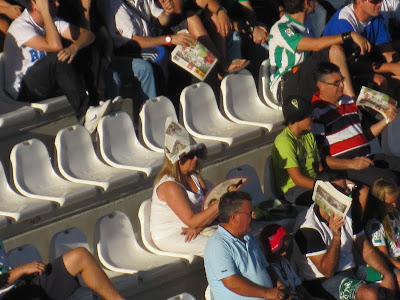 Ingenious use of matchday programme, tick 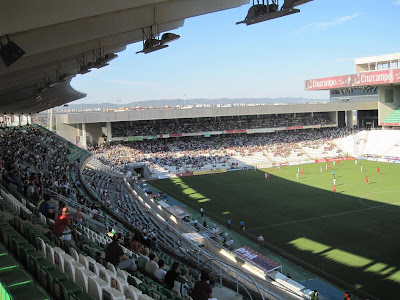 Estadio Nuevo Arcangel
Andalucia loves you, apparently. It says so all over Malaga airport as you arrive, and I'm sure I've noted living legend, Miguel Ángel Jiménez with that catchphrase emblazoned on his golfing clobber as he sucks on an expensive Cuban La-Di-Da in between shots. I was beginning to feel the love for the place too. Not least because I was about to jump back on the train I'd arrived on, and continue en route to Sevilla and see Real Betis the next morning. Cruzcampo don't do European Football Weekends ...... 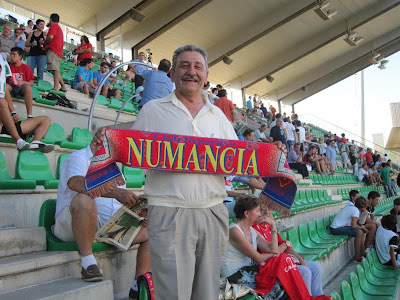 Cór blimey, guv'nor. I had to end the report with this chap, my hero: the single away fan at the game.
Like this? This was that trip to Real Betis v RCD Mallorca.
Follow European Football Weekends on Twitter
Posted by Danny Last at 22:01

With a bit of luck I'll be there for their upcoming Copa game in October.

Palm trees in the last match... a very dodgy looking crocodile in this one... Spanish football mascots are a very strange selection.