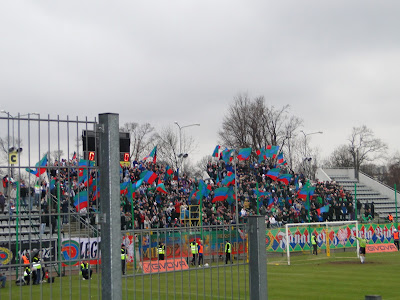 Michał Zachody watches a fractious Third Division game unfold in Poland before enlightening us about the Polish version of non-league day...
Some say that the break for international football is unnecessary and it doesn’t feel like any games are played at all. Of course that opinion is common for those who will never get their noses out of premier divisions in their countries to experience the beautiful game in lower leagues. Especially in Poland, with all those troubles on and off the pitch during our national team’s away match in Lithuania. The less said about those sad pictures from Kaunas that Friday, the better.
The opportunity was perfect – with no game in Wroclaw that weekend, a game in the nearest city of Legnica took place. A clash of the highest stake in Polish third division, where Miedź hosted Zawisza Bydgoszcz. Both teams - tied at thirty-eight points and second place in the table - were counting on gaining an advantage with the crucial win. Only the two top places give promotion to the backup of Polish Ekstraklasa from this ‘western’ group of third division. But this game held much more interest than from purely a single football angle.
A bit of history first. Zawisza and Miedź are certainly not feeling too well in third division as both clubs (and cities, of course) are capable of having teams at the second tier at least. Unfortunately, ambitions were higher than possibilities and I’m talking about finances, not background. Miedź play at the lovely (although lacking floodlights) Orła Białego ground (capacity: 6,200), while Zawisza hosts rivals at athletic stadium that is one of the best in Poland (capacity: 20,000) and one in which the Polish national team have also used.
The reputation of Zawisza fans is not the best, especially recalling the devastation home ‘fans’ did to their own ground during September’s clash with Widzew Łódź in Polish Cup. Hooligans gained their club a costly fine of playing without any spectators for the rest of the 2010. The Zawisza authorities even thought about ending their investments in the club, but the city hall encouraged them to give it one more shot. The biggest loser of those sad scenes was probably Zbigniew Boniek, Polish legendary striker that was born in Bydgoszcz and started his career in Zawisza. He invited potential investors to the game that day and they are probably still shaking at the sound of city’s or club’s name, clearly not having the best of memories.
But the bad reputation of Zawisza fans was in the shadow as this was regarded as clash of two other rival clubs from Lower Silesia region – Śląsk Wrocław and Zagłębie Lubin. The first ones are friends with Miedź fans, while the others have good relationships with Zawisza fans. As both clubs play in Ekstraklasa now, their fans had free weekend and many made plans to visit the game. Miedź gave a nod to Śląsk fans saying that every supporter from Wrocław won’t have to pay for the tickets, while Zawisza and Zagłębie fans organized action called ‘Invasion at Legnica’ to make the away end as loud as possible.
As I previously said, with both clubs eyeing possible promotion this was a six-pointer at the top of the table. As it’s an hour long journey from Wrocław to Legnica, we left ninety minutes before the kick-off. That proved to be not enough with a stop for beers and fuel at gas station just after the start, in addition to the speed, or lack of it, from the old Skoda we travelled with, and problems with parking the car near the stadium made us miss the kick off. As we were going through the gates we saw the away fans make a mess behind their stand, devastating one fence and fighting with police as they, in turn, sprayed tear gas all over them. I don’t know the reason behind their behaviour, but it proved costly once again as now, Zawisza fans are banned from next five away games. They simply can’t learn on their mistakes. Just a small part of the police forces around the stadium that day
When we finally got to the ground it was the time to see how many fans had bothered to watch this game. Unfortunately it was still bit cold that day and rainy – even though it was second biggest crowd at Miedź this season (2,800 turned up, 3,000 had watched the win a week earlier against Górnik Wałbrzych). The only stand with a roof was full, and the home fans stand behind the goal was loud and… half empty. The opposite stand was really empty and the away end full with black and blue (Zawisza fans) and orange (Zagłębie supporters) colours. 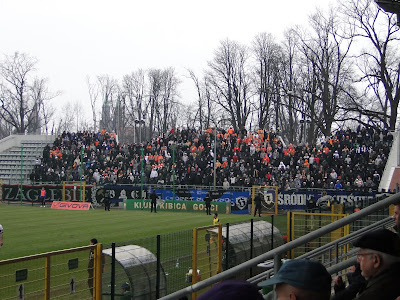 Away stand complete with a strange banner in front of it saying ‘Away Fans Club’. I've never seen anything like that before
It maybe wasn’t as loud as stadiums in the top division but I know a few Śląsk supporters that miss that kind of unique atmosphere from the time when we were shit when a club from Wrocław played at the same level couple of years ago. Unfortunately, the away fans had to ruin everything – rather than focusing of helping their team they just sung abuse towards Miedź and Śląsk friendship. It  would be a lie if I told you that I wasn’t expecting that but where was the passion shared with their own team? And it was not the abuse that we sometimes tolerate and maybe even laugh at – it was very negative and even embarrassing at times. Good thing that home fans, with Śląsk supporters among them, didn’t get into that fight – they simply shouted: ‘Where’s that invasion, Zawisza?’.
It was fairly entertaining on the pitch too, especially in the first half. The home side were nervous but, with time rose in strength and with just thirty minutes on the clock they won penalty and Zawisza’s keeper was sent off. A young reserve goalie came on, saved the penalty and very much kept the away team in the tie for the rest of the half. Impressive. Miedź, despite having the advantage, were poor in the second part of the game but scored with their only move after the break – the goal came from Tomasz Jarzębowski, former Legia Warszawa player.
Interestingly, Śląsk fans could see three former players of their club and two of them played for Zawisza. Bejamin Imeh was rather disliked at Oporowska, while Patryk Klofik was a fans favourite before he failed to match the level of expectations in Ekstraklasa and in this game he was first substitution used by Zawisza’s coach to introduce reserve goalkeeper. Poor lad. Also once again I saw the smallest senior player I have ever seen live in the professional football – Maciej Garuch, who is not only playing for Miedź but is also their captain, is just 154 centimeters tall. Mind, he even won few headers that day! 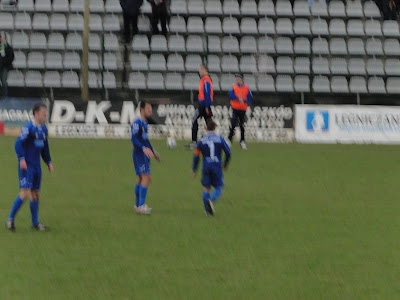 Sorry for the bad quality of the picture… but you get the point. He. Is. Tiny.
The way home was as unattractive as the weather that day but we all wished Miedź to get promoted. Their stadium is beautifully placed in the heart of the park in the city’s center and with a good connection to Wrocław - no wonder that Legnica was picked as the possible base for one of sixteen national teams that will come to Poland and Ukraine for EURO 2012. And there are good signs for Miedź as well – after years of bad management, now they finally have a decent sponsor and with more money being pumped in, the team are not only on for promotion, but also should be safe in the league above. This may not only be a dream for their fans.
Wielki Dzień Naszej Piłki (Polish Non-League Day – 26/26.03.2011)
I know that especially at EFW towers people fell in love with the idea of Non-League Day. It's not only there though. Thanks to Twitter I follow more or less what is going on in lower leagues in England, and after September’s edition of Non-League Day, I decided to give it a try in Poland. With a little bit of help (well, it was large bit to be honest) from my friends from Playarena, we picked a name (It’s Wielki Dzień Naszej Piłki, which means Big Day of Our Football – not as silly in Polish as it sounds in English!) created a site and started working on promoting this unique idea in Poland. It was a success – over 320 games in our base from the three lowest divisions in Polish football and recognition in media all over the country.
We picked the last weekend of March for a second edition and although it didn’t turn out to be as big in terms of games as the first one, we had better support from the media and focused on helping the clubs promoting their games in local communities – by preparing a special tutorial and a handbook for their use for example. It worked where they used it and here are some pictures that may be interesting for you folks. There are pictures from four lowest divisions in Poland. There is quite a difference from the amateur football you may know from England. But give it a go... 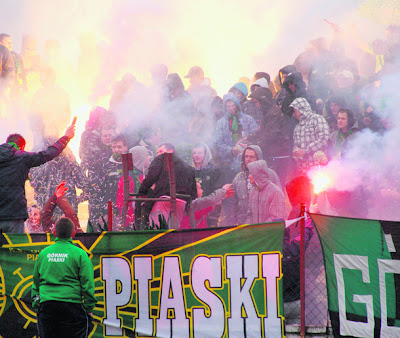 Fans of Górnik Piaski during the game. Their team plays in sixth league. 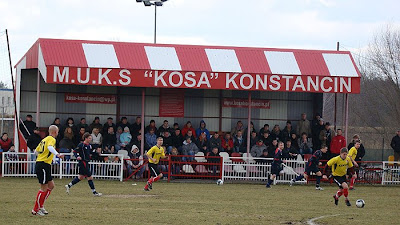 This is the club created by Roman Kosecki, former Galatasaray and Atletico Madrid player. Kosa plays at seventh tier. 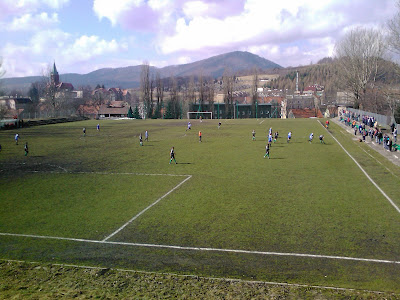 This game was played in the beautiful surroundings of Wałbrzych, seventh league as well. 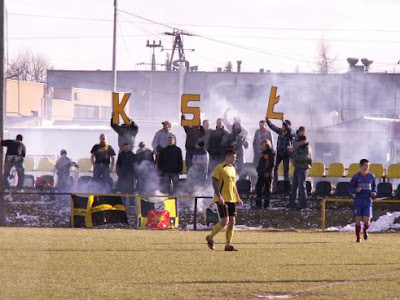 Fans of KS Łomianki loudly and proudly supporting their team despite them playing in seventh league.


Michał Zachody is known to his thousands of followers on Twitter as @PolishScout.


His blog, dedicated to Polish football, is one of the Guardian's Top 100 to follow in 2011. It's called Polish Football Scout, it's brilliant and you can access it by simply CLICKING ON ME.