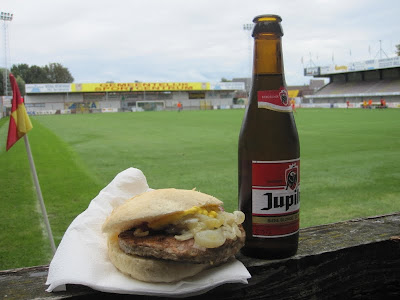 Les EFW - Un Petit Bonus
OMS Ingelmunster 0-1 Woluwe Zaventem (14:08:11)
Sint-Eloois-Winkel 1-1* Royale Union Saint-Gilloise (14:08:11)
Previously on LesEFW - we'd pitched up at Amiens Sporting Club, Racing Club de Lens and K.A.A. Gent. Now it was time to ditch the household names and get real. Here's Stuart Fuller on the last leg of our tour.....
After one of the best nights out known to man, where we attempted but failed in the ultimate XI of Belgium's finest beers, falling just one short, we rose early ready for the day ahead.  The previous night was a blur.  At one point there was a clown, or a mask.  Someone gave us some firewater - literally, and then I ended up ordering five baguettes when all I wanted was a sausage roll.  We also decided that the best ever football song was Sheffield United's version of "Annie's Song", but still Danny kept singing "like a gallon of Magners".  At some point there was the devastating news that our Sunday afternoon game at Harelbeke, just down the E17 had actually kicked off at 7.30pm on the Saturday.

Bugger. A week's worth of preparation, pouring over maps and planning our timings out of the window. It was back to the drawing board, but with beers such as Kwerk, Primus and my personal favourite Floris Apple our decision making was, how we would say, "cloudy".  We narrowed it down to two venues, both just north of Kortrijk - Ingelmunster and Sint Eloois Winkel. Both ticked the boxes, both were essentially on the way home but which one to choose?  Then Andy had a brainwave.  "Let's do a Souness"..."What?  Buy a grey curly wig and manage a number of teams badly?" was our considered response.  "No"..he slurred "let's do a half at Ingelmunster and then we are off......to Sint Eloois Winkel"...Uncle Google told me it was 11km, so it was possible.  GAME ON!

Sunday morning was as cloudy as the marvellous White Mystic wheat beer but after some breakfast in the romantic square, completely lost on us Englishmen, we headed off.  First to Kortrijk and then to Harelbeke "just in case" they had left a door/gate open so we could have a wander in.  And would you believe they had...sort of.  Boxes ticked we arrived at Ingelmunster.  The ground was overlooked by the Bacchus brewery that brews the world famous Kriek fruit beer as well as the Kasteel brewing house.  If you cannot organise a piss up here then, well, you must be an idiot. 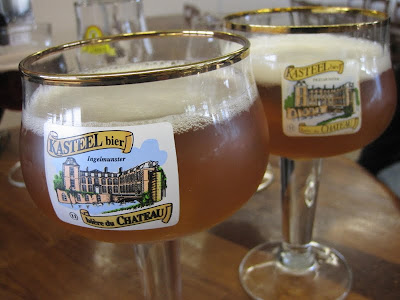 A pair of absolute beauties, tick
Six Euro later and we were inside, still none the wiser who the opposing team was.  And we got no clue from our vantage point of the best football bar in Belgium when both teams SPRINTED onto the pitch before lining up on the halfway line.  The visitors sported the dullest kit in the world.  Plain blue Nike shorts and socks, an orange shirt and that was it.  No club badge, no sponsors logo, nothing.  We immediately felt pity on them and vowed to raise the funds to sponsor them.  That was if we could actually find out who they were.  An away fan (there were four) had a jacket on with KWVZ Crew on so we expected it all to kick off at any point. 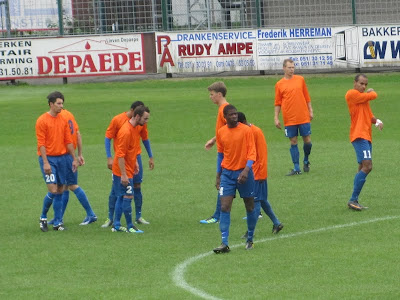 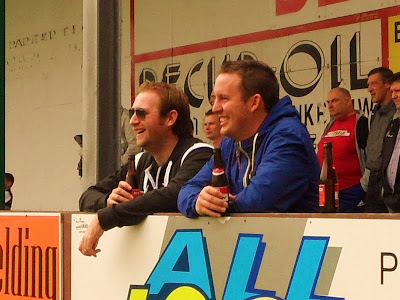 One for all.... @HuddoHudson and @DannyLast in not-on-Twitter, shock
In truth the away team were the better team.  Faced with two or three of the oldest looking players I have ever seen since the Northern Writers United game a few weeks ago.  It turned out they were called KWV Zaventem, and came from the area close to Brussels Airport.  You learn something new everyday.  Gentlemen expect an offer you cannot refuse coming your way via email very very soon.  After amusing the locals with our "foreign" accents and tails of debauchery in Gent we were off to the village, or should that be hamlet, of Sint Eloois Winkel, population 3,500.

During the course of the afternoon we had seen a number of "nightclubs" on the edge of the road, in strange places.  Neon light, shutters down, but all with a dodgy look.  Of course, we figured, as we saw a shifty old bloke coming out of one on the edge of Ingelmunster, they were local brothels.  Unfortunately we were on a tight timescale so there was no chance to try and find a "magic" door so nothing to report there at all.  Nope, nothing at all.

Ten minutes later and we were pulling up outside the sports ground in the village.  The gates were wide open and we wandered in.  The away team, Royale Union Saint-Gilloise eleven times winners of the Belgium championship have fallen on hard times since the late 1980's and are now in the lower leagues.  However, they had brought a fair size following from Brussels and held a 1-0 half time lead.  This was like the equivalant of Leiston v Burnley. We resisted the charms of a cuppa-soup in the bar, and took our places amongst the away fans, including a dog wearing club colours, as if it was the most natural thing you can find in a ground these days. 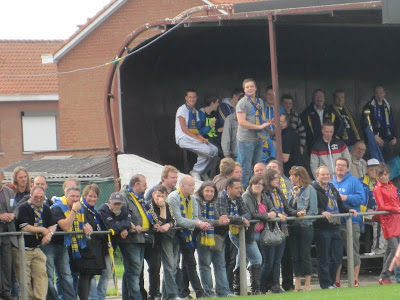 A 'fair following' from Brussels 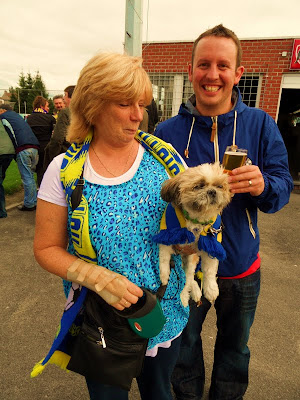 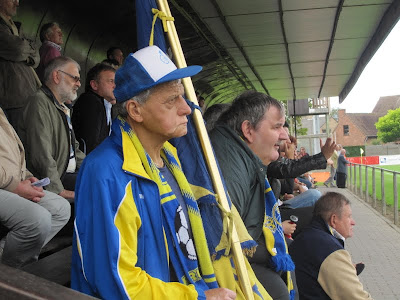 Eleven, ELEVEN times winners of the Belgian Championship, I tell thee ...
"Oi Lino, that was a shocking offside call.  You should go to Specsavers"  Shouted Andy, only to find that he already had and was wearing glasses.  It looked all over for the home side when they had a player sent off for a second yellow with a few minutes to go, but just to prove how crazy this whole game is they then scored a stunning equaliser.

Full time and it was 1-1.  No time for extra-time for us nor the tall leggy blonde who looked more in keeping with one of those strange establishments by the side of the road than a lower league football club as we had a ferry to catch so we headed out.  The cheer as we got in the TBIR Taxi must have been for a corner surely...

An hour later we were back at the port of Calais.  Apparently they don't have extra time in the cup so it goes straight to penalties.  Fortunately we hadn't missed the story of the round as Saint-Gilloise had won 5-4 on penalties.

So after 650 miles, five games, two magic doors, over fifteen different beers and a number of belly-aching laughs, our first ever LesEFW was at an end.  Well not quite.  Keep an eye out for the post trip video, coming to all bad establishments soon. 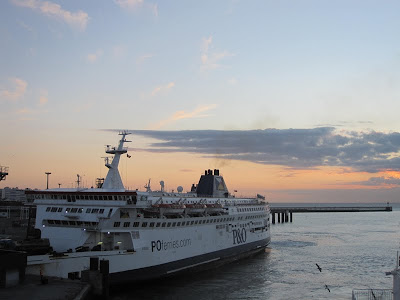 Ferry good show. Thanks for reading and all that ...
Loads more photos from this day HERE
Follow Andy Hudson and European Football Weekends and The Ball is Round on that there Twitter.
Posted by Danny Last at 10:54