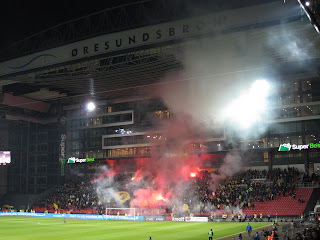 After games in both Odense and Helsingborg, this was the main event of the weekend - derby day, Denmark style. This is undoubtedly the biggest match in Danish football and needed a big build up accordingly. So, the EFW Team travelled in by ferry from Sweden and then boarded the "Tuborg Express" from Helsingør before arriving to drink in the atmosphere in Copenhagen.

Apparently, there were a few scuffles as the Brøndby fans made their way to the stadium with a traditional march but we didn't see any trouble all day. Nowadays, this derby is billed as the "New Firm" but to my mind, despite lots of healthy banter, it didn't have any of the vitriol, racism and bigotry that often defines an "Old Firm" encounter in Glasgow.

We weren't searched at all upon entering The Parken. This was pretty good news as we'd smuggled in a few shots of "Fisk" to drink at half time. These were purely for medicinal purposes you understand as it was bloody freezing.

If I'm honest, the foyer of the ground felt like a cinema. There were large velvet curtains everywhere, sectioning off sponsors lounges and the whiff in the air was of....popcorn (popcorn!). Don't panic too much though, pints of beer were being poured aplenty and sausages were also available for us fat lads. 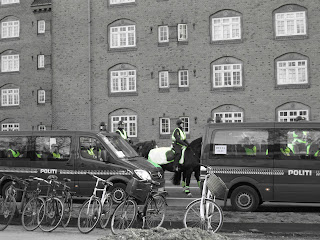 The Danish politi were out in force. 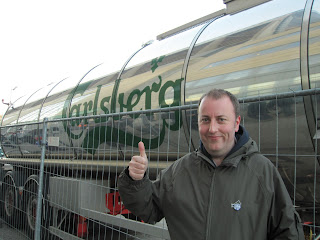 Thumbs up from Big Deaks as FCK order a beer tanker for EFW. 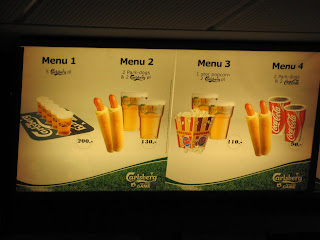 Menu 1 please guv.
These aren't the happiest of times for Brøndby supporters. Since their last championship in 2004/05 with Laudrup at the helm, the club have been struggling on and off the pitch. Constant changes of managers and directors haven't helped. Some fans think the good old "Brøndby passion" is gone and the "New Firm" has lost some of its magic. The Brøndby fans I talked to still dislike FCK though, one called them "a silly product of modern football".

Inside, the ground, most of the fans had made a great effort. The FCK ultras were in good number and voice in one corner of the stand behind one end and Brøndby had a good few thousand fans behind the other goal. Tifo displays, flags, flares and all the other things you associate with derby days were there. Great stuff.

Sadly, for large periods, the players couldn't match the passion shown in the stands. Indeed, the first shot we saw was at half time when Mr Fuller remembered our test tubes full of spirits. Down the hatch they went and back out we went for the second half with a warm glow. Two late goals ended up clinching a 2-0 victory and city bragging rights for FCK. I won't dwell on the match as you'd have all read about it by now. I will say, if you're a fan of offsides then forget this derby. There weren't any in the whole match. 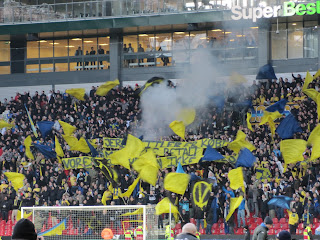 The lads from the Western Outskirts. 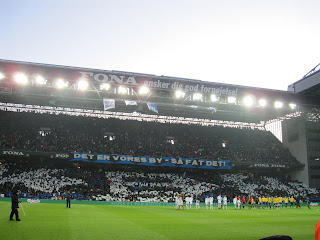 The banner reads something like "Get Out - This is our Town" 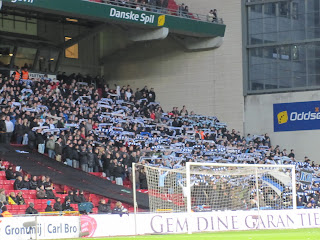 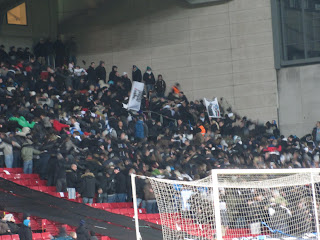 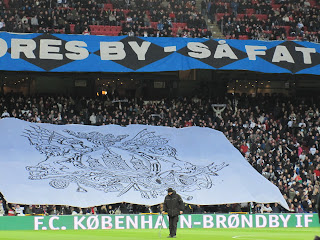 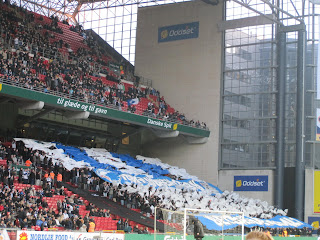 Another Tifo.
After we'd watched the away fans set fire to parts of their section, we met up with some FCK and Brøndby fans across the road in a great little bar called Thyges Kro in Osterbrogade. The post match banter and bonding with our new Danish friends exceeded the excitement on the pitch. Football is more than 90 minutes as we all know and we're kings of the social side of the game here at EFW.

In the pub, FCK fan Ivar gained an EFW gold star by entertaining us long into the night with his many stories. His wife once stopped talking to him for two weeks for getting a FCK tattoo on his arm and he also received an additional two week ban for erecting a seven foot satellite dish on the side of the house to watch Danish football around the clock. He also dropped another bomb shell by telling us he'd played both Eric Bristow and Lars Ulrich of Metallica at darts. The Danny Baker of Denmark was good value I can tell you.

After 4 hours of talking nonsense, everyone was pretty Hammaby-ied. A guy called Marcus claimed to be the brother of the Burnley goalkeeper 'The Beast' before mooning to the pub. Another was best mates with Michael Schumacher. Around 1am, we decided to draw the curtain on our Scandinavian EFW. If you aren't too bothered about the standard of football but you want to meet genuinely warm and friendly people, then book a trip to Denmark. We'll be back. Skål! 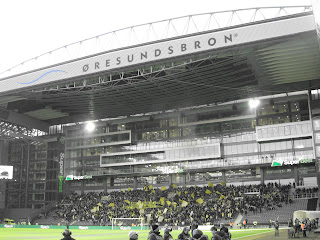 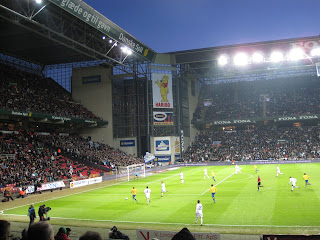 Horrendous teddy bear in the corner - what the FCK!? 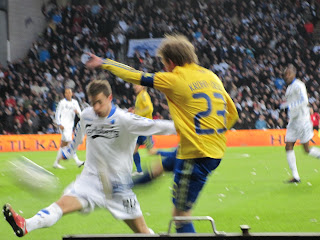 A bit of action. 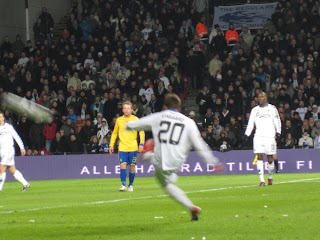 Martin Vingaard opens the scoring with a free kick. 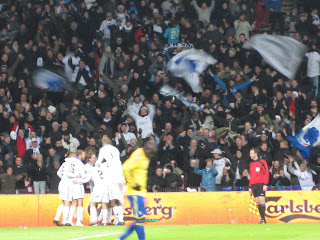 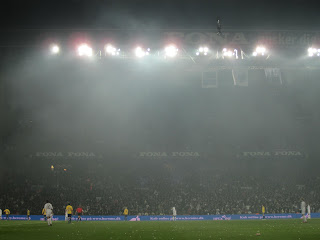 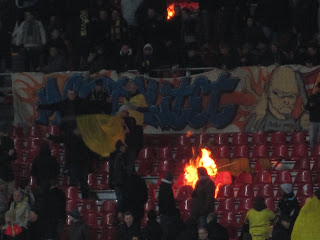 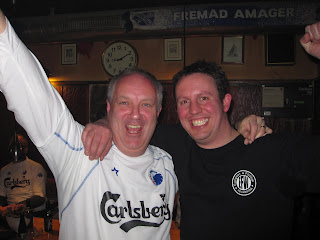 Very nice report - What the game lacked in intensity the evening afterwards made up for. You guys are fun to be with :)
I'll keep up my form and tell you a story from my trip home: I staggered in zig-zag to the trainstation where a display told me I had to wait 15 minutes for my train. Standing at the platform I woke up, as the train pulled out of the station... without me! First time I've ever fallen asleep standing up. I took a taxi :D
A great night!
PS It's true I played Eric Bristow at 1st round Denmark open (1985 I think) but I was severely beaten 2-0 never reaching a double myself :) - He was my idol.

AciJub - Great stuff my friend. I suspect your wife won't be talking to you for another two weeks now eh ;-)

We really enjoyed the post match beers and it was good to see fans from both sides drinking together afterwards with a bit of banter.

We'll be back for another derby day next season if not before.

You shall be welcome- Even sober (now) I stand by my invite to come for a meal and see the suburb. I actually live very near FCN so that could be an occasion ;)

I scraped through a reprieve, my wife is still talking... is that good or bad?

Nice to hear that you had a good time over here :-)
Sadly, the game was one of the most boring "New Firms" ever seen. But at least the right side won ;-)

Frederik - thanks for leaving a comment. If you look through the games we go to see on this site, we're not always about seeing the best teams. We love the social aspect of football here at EFW and moreover the fans. A few beers and a laugh is worth more to me than scintillating football. As such, Denmark ticked all our boxes.

I'd been lead to believe that the New Firm match had lost some of its magic. If that is the case, I'd like to have seen it in its pomp!

Good report on the Danish derby lads.
I really like your blog and the concept behind it. Reminds me of my one and only trip to watch my team, Dundalk FC, play in Europe against a Croatian team a few years ago.

Any plans to make it over to a League of Ireland match this year?

Owen, thanks for leaving a comment. I've been to a few games out in Ireland (Longford Town,Sligo Rovers,
Kilkenny City & Finn Harps) but that was before I started writing this nonsense.

What is Dundalk like? Worth a visit for the EFW Team!?

Dundalk is a town of 30,000 people, about 80K north of Dublin. Birthplace of Steve Staunton, The Corrs and me. Its a nice place with some decent pubs where you can get a good pint. Our stadium, Oriel Park, is a throw back to football grounds of the 70's. For the big matches against Shamrock Rovers & Bohemians the atmosphere is great. Our derby matches with local rivals Drogheda are the highlight of the season.
If you guys do fancy a trip over to an Irish game this Summer (our season is March - Nov) I'd recommend a trip to Dundalk, Dublin or Galway. You might like to take in a Gaelic Football or Hurling match in Croke Park too to give you an even better experience of Irish sport.

Apparently, there were a few scuffles as the Brøndby fans made their way to the stadium with a traditional march but we didn't see any trouble all day. Nowadays, this derby is billed as the "New Firm" but to my mind, despite lots of healthy banter, it didn't have any of the vitriol, racism and bigotry that often defines an "Old Firm" encounter in Glasgow.