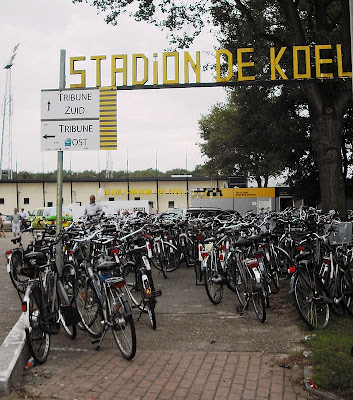 V Festival
VVV Venlo 2-2 Ajax Amsterdam (21:08:11)
‘Venlose Voetbal Vereniging’ (VVV) Venlo is an Eredivisie club located in Holland’s most southerly province of Limburg, a narrow strip of picturesque towns and scenic countryside squeezed between Belgium and Germany, writes Paul Whitaker. VVV also happens to be one of the Eredivisie clubs geographically closest to the footballing heartland of North-Rhine Westphalia. If you have never been to this part of Germany before, think of North West England and then add cheap match tickets, drinking beer on terraces, currywurst and watching talented local players who also turn out for a successful national team. For  European Football Weekenders wanting a classic ‘two matches in two countries in two days’ trip, then I recommend VVV Venlo as an authentic dutch footie experience to compliment the Bundesliga football just over the border at  Borussia Monchengladbach , FC Koln, Schalke 04, VFL Bochum , Borussia Dortmund, MSV Duisburg, Fortuna Dusseldorf  or  Bayer Levekusen.

Trains to Venlo from Amsterdam’s Central Station via Eindhoven, will take nearly 2.5 hours and a 2nd class return will set you back about € 42 euros (www.ns.nl) Our preferred option was a direct train from Dusseldorf’s Hauptbahnhof that take just over an hour to Venlo.  2nd class returns were also cheaper at €25 (www.bahn.com). Judging by the Germans who got off the train with us, visitors seemed to be either heading for a smoke in the ‘coffee’ shops in the centre or cycling to scenic countryside outside. If you have the ‘wife filter’ activated on your computer, type ‘www.lustforlimburg.com’ into your internet search engine and you will click on an excellent english language website  of  tourist attractions, all within a cycle ride of Venlo. Highlights include the famous ‘Hertog Jan’ brewery, located in the picturesque village of Arcen and the National War and Resistance Museum, just outside the rebuilt village of Overloon. Venlo’s tourist office (40-2 Nieuwstraat), a few minutes walk from the train station can provide details of bike rentals but not the quality of ‘weed’ on sale at the coffee shops.

The town council must be applauded for ensuring Venlo’s most popular bars and trendiest hotel are all handily located in one street, Parade. There is the ubquitous Irish bar called ‘Shannons’(69 Parade), ‘Cafe de Gouverneur’ (27 Parade) and ‘Kefee d’n Erme’ (23 Parade) before you retire to bed at the trendy ‘Hotel Puur’ (7 Parade) . Venlo’s younger football crowd apparently hang out at ‘Baer de Woers’ (3-9 Steenstraat). There does not appear to be an established ‘away’ bar in Venlo, as most visiting supporters have to travel directly to the VVV’s stadium on organized coaches. The only Ajax shirt on display in Venlo centre all weekend, was hanging in a sports shop. 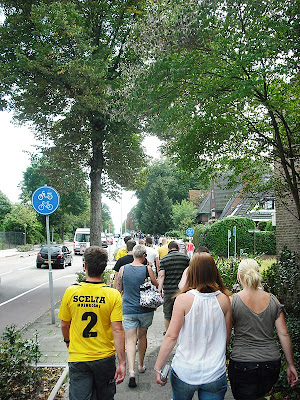 WALKING DOWN THE KALDENKERKENWERG
Getting to VVV from Venlo centre or the train station is a doddle. Simply follow the throngs of yellow shirted VVV supporters walking /cycling along Kaldenkerkenwerg for about 15 minutes and the stadium’s floodlights are popping up over the trees to guide you in. If you are saddle sore after a hard day’s ‘lusting around Limburg’, you can always pick up the bus from the central station. The number 3, direction “Casinoflat” or number 5 or 6, direction “Veegtes”. Jump off at “Maagdenbergplein” and it’s an 8 minute stroll to VVV. This brief tour around Venlo’s residential suburbs will set you back about 2.50 euro return. Parking in the area around the stadium appears to be at a premium and probably explains why so many choose to walk or cycle from Venlo centre. 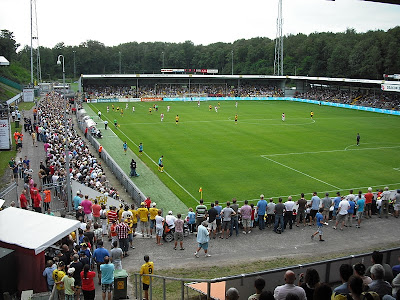 DE KOEL
VVV have been playing football at the Seacon Stadion or de Koel, since 1972. Although it may not be Holland’s oldest football stadium, it distinct design helps makes watching dutch football there an enjoyable experience. Despite this part of Holland being flat as a pancake, two of de Koel’s four stands (including the main stand) appear to be set into North Limburg’s only hillside. Consequently VVV supporters have to go down to reach the stands and even the players have to negotiate flights of steps to get to the pitch. This probably explains why de Koel translates as ‘the pit’. 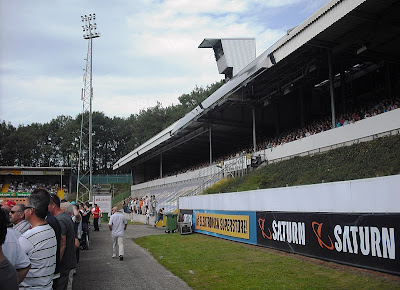 LOOKING UP TO DE KOEL’S MAIN STAND
De Koel has only a capacity of 8000 maximum, of which 1500 can stand on the home terrace sections O1-4. Here, you will find VVV’s main supporter group, “D’n twellefde man” providing most of the de Koel’s noise and colour. At the opposite end, 500 away supporters will be tucked up safely behind the high metal fences in sections W1-3. I hear de Koel will close in a couple of seasons when VVV Venlo will move into a “multifunctional complex” also hosting music concerts, trade-shows and other events. I only hope “D’n twellefde man” can persuade VVV and the new stadium owners to incorporate a terraced section into the design. If safe terracing works at de Koel and across the border in Germany where the day before I had watched 25,000 Borussia Dortmund supporters bouncing on the Sud Tribune, why get rid of it? 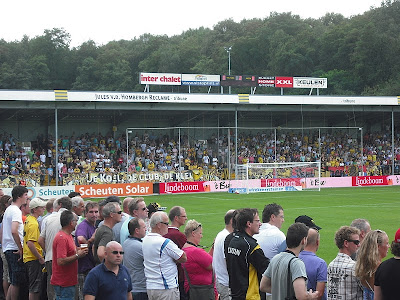 THE D’N TWELLEFDE MAN
Views of the pitch are excellent from all parts of the de Koel, but sections O , Z , N and W 4 , 5 , 6 are season ticket holders and doubtful you will get a ticket in these sections. Try and ask for tickets in  sections VN4-5 which  will not only give you good views of VVV Venlo’s home terrace, but also the players entering the pitch from their changing rooms high behind you in the main stand. Many home supporters (including me) took the opportunity to stand behind their seating sections and I took the opportunity to stroll around half of de Koel, to cheer on VVV attacking the other end in the second half. 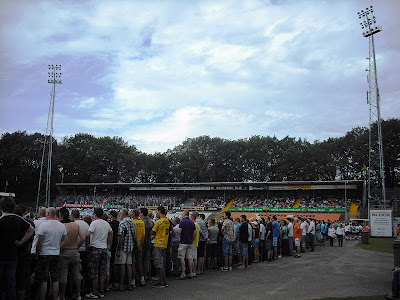 STANDING ROOM ONLY AT DE KOEL
The club shop is located in the same white building as the ticket office, both outside De Koel’s main entrance. Be the talk of the pub back home and pick up a  yellow and back  VVV home shirt, with ‘Scelta Mushrooms’, the shirt sponsors and not the name of their star striker. VVV souvenirs can also be purchased at sport shops back in Venlo centre. The club issues a match programme called “de sloef”.  Costing a mere €1, the magazine can be picked up from a number of vendors dotted both outside and inside de Koel.
Between the club shop and de Koel, you will find a statue of Jan Klaassens, VVV’s most famous player. Klaassens first stint at VVV led the club to their only piece of silverware, when they beat ADO Den Haag 4-1 in the 1959 KNVB Cup. Klaassens then went on to pick up two league titles wearing the red and white of Feyenoord, 57 caps wearing the orange of the dutch national team, before returning to finish his  career  in the yellow and black of his beloved VVV. After hanging his boots up in 1967, Klaassens ran a small cigar shop and I only know this after stumbling across the tiny premises, back on Venlo’s Parade. It was now crammed full of memorabilia from Klaassens’ distinguished football career and must be a contender for the smallest football museum in Europe.

VVV supporter’s club bar can be found at the left corner as you walk towards de Koel. Thankfully, you do not need exchange euros for any of those annoying club ‘tokens’ or ‘cards’ to enjoy the local tipple, Lindeboom. Knowing dutch football supporter groups trend of friendships with other groups I was surprised to hear VVV’s “D’n twellefde man” did not have any supporter friendships, especially with any of clubs just over the border in North-Rhine Westphalia. The only other ‘football tourists’ appeared to be a Japanese couple there to support fellow countryman and VVV defender Maya Yoshida.

VVV ’s big rivals are as expected clubs from the province of Limburg. Fortuna Sittard and MVV Maastricht are both in the ‘Eeste Divisie’ or Jupiler league. Limburg’s other Eredivisie representative Roda JC  Kerkrade, will guarantee a full  away supporters section, an 11.30am kick-off and a great match atmosphere at de Koel. Please get there early if Ajax the visitors. I missed a kick-off for the first time in 15 years, due to crowd congestion outside de Koel. This did not happen queuing up outside Wembley, Camp Nou, San Siro or La Bombonera... 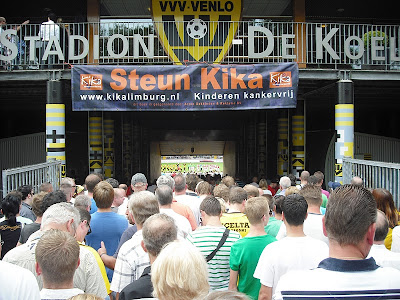 VVV V AJAX KICKS OFF WITH ME OUTSIDE
The match itself was less one-sided as the VVV supporters were predicting before kick-off. Although Ajax started off strongly, they failed to take numerous chances. Two goals from VVV’s talented midfielder Ahmed Musa early in the second half had de Koel rocking and VVV on course for their first home win over Ajax, since 1989. Ajax coach Frank De Boer made some tactical substitutions and the reigning champions soon pulled a goal back. Christien Eriksen ran almost the length of the pitch before feeding the ball through to Theo Janssen to score on 68th minutes.  Kolbeinn Sigthorsson then levelled the score a minute later. VVV’s goalkeeper Gentenaar pulled off some crucial saves towards the end, but points would be shared. Both the VVV supporters and myself went back down Kaldenkerkenwerg happy with what we had seen at de Koel. 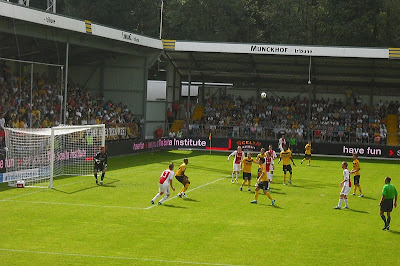 Getting a ticket for VVV Venlo

VVV epitomizes the Venlo folk in their hospitality to visitors and if you contact the club via ticketing@vvv-venlo.nl  , they should be able to sort you out a ticket. Simply email the club/supporters club and make arrangements to collect ticket from ticket office about an hour before kick-off. Ticket office is outside De Koel’s main entrance and some photo ID or passport will normally be needed when collecting tickets. Tickets for Eredivise fixtures normally go on sale about three weeks before and refreshing to see VVV do not increase ticket prices for the visit of Ajax, Feyenoord or PSV . Ticket prices are cheapest in the VW and VN sections at €20 euros and although you are close to the pitch, also note you are open to the elements.

Thanks to Freek van de Kerkhof for the ticket and patiently answering my questions on everything VVV.