Rooks get caught in Spitfires propeller 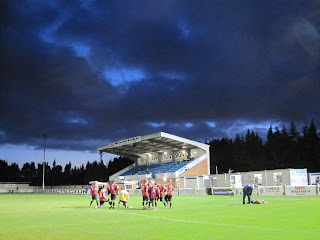 It's hard to curb your enthusiasm watching Lewes on the road, especially as this particular match had captured the attention of mainland Europe. Lewes supporters branches from both Berlin and Antwerp had flown in especially. The Rooks have officially spread their wings.

This match formed part one of a two part series entitled 'Hampshire v Sussex'. First up was this funfest which was to be followed by a rare trip to see some mod£rn football the following day at St Mary's Stadium down the road - Southampton v Brighton.

Despite the fact that EFW has been nominated for the end of year When Saturday Comes Blog Awards (send an email to webwatch@wsc.co.uk voting for us before next week please - Ed), I'm still a man of the people. As such, we travelled down to the Silverlake Stadium on a train, that is public (public!) transport.

As we disembarked to change trains at Fareham, we were met with horizontal rain sweeping across the platform. It was time for stormy weather. The match was in significant doubt. As such, the EFW team were receiving regular updates from Lewes boss Ibbo and Ryan Storrie - "a pacy winger who can play on either flank". Their texts were positive so we batted onto Eastleigh regardless. Texts from managers and players to assist the fans - it brings a tear to this correspondents eyes anyway.

It gave Cynical and I another chance to tout our idea of a 'postponedometer' that we tried to pitch to Duncan Bannatyne last season. A simple device that lets you know the 10 nearest matches to be played nearest to where you are, should the match you're attending get called off. It's going to retail at £19.99 and this time next year....

Upon our arrival at the ground we were handed complimentary tickets by the aforementioned Ibbo - Lewes personality of the year if I have anything to do with the Viva Lewes awards. Add to that the fact that some bright spark had decided to introduce a happy hour(s) in the EFC clubhouse - £2 a pint - and the outlook was already starting to look brighter. It had been some session back at EFW HQ the previous night, so we needed a boost. 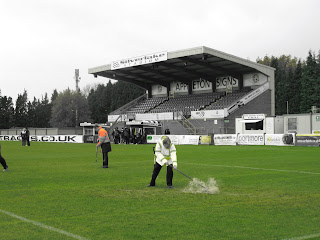 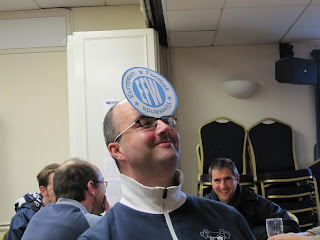 Stoffers. The Berlin branch of the Lewes supporters club. 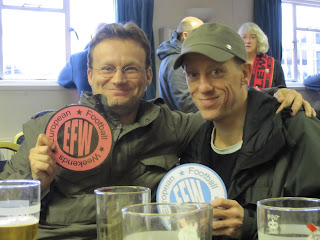 The Antwerp massive. Roland and Frank. 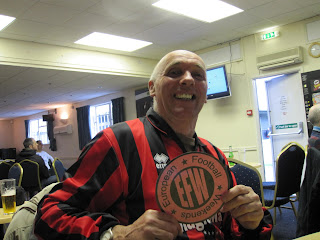 Terry. I promised I'd stick him in a report. Great bloke. 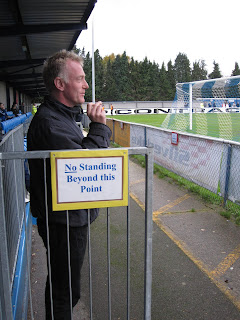 At regular intervals a giant of a friendly steward would come in and update us on the prospects of play. Not good initially. Thoughts turned to putting in an appearance at nearby Gosport Borough v Hungerford and then back to the bar again swiftly afterwards. Cynical even threatened to crank up the karaoke machine - this lead to a few more volunteers being called for the fork the pitch.

Then our stewarding friend returned and announced that it was 'ON'. The volunteers and ground staff at Eastleigh had done a forking brilliant job and five FIFA stars are on there way to them as we speak. We celebrated with another £2 pint along with the World Bowls on the telly. Dreamy stuff. By this time we'd been joined by Passport to Football's Stuart Fuller and his daughter Lolly - Lewes' newest supporters who are becoming as equally obsessed with The Rooks as we are.

After his initial negativity the steward had turned it right round, like a record baby, right round, right round. The game was not dead, it was alive. I've included that sentence in this report because on our way home that night it really made us laugh. Now it just sounds ridiculous (never stopped you before - Ed).

Onto the match then and two minutes into proceedings we were behind - to an own goal. Oh. It was going to take something rather special to beat Lewes keeper Rikki Banks in his current form. Eastleigh were never going to do it so 17 year old Rook Scott Manning duly obliged by slicing a clearance into his own net. Don't panic though Mr Manning, a long a fruitful career awaits for you, judging by the way you picked yourself up and performed after that. Good lad. 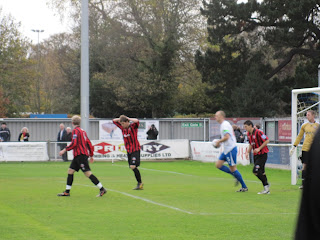 Chin up lad. Mr Manning after his og. 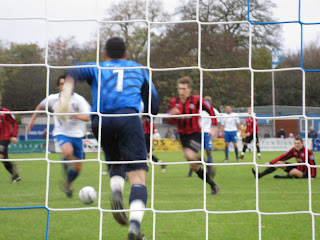 Another Lewes attack, another near miss. 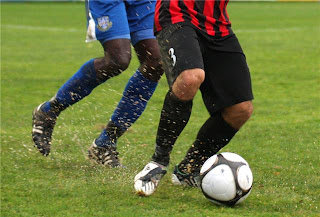 Splash. Aa-ahh, he saved everyone of us.

Lewes played superbly without forcing the equaliser they richly deserved. EFW man Crabby was on the bench still nursing knee-knack. He would have filled his boots. In fairness, Ibbo didn't blame the fact we were missing six first-team players through various knack. "We were without six or seven players and it would be easy to hide behind that" he said not mentioning the six or seven players out injured afterwards. 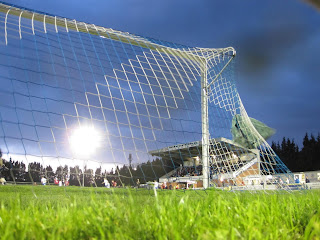 We steal the Ball is Round photo idea - don't tell Mr Fuller. 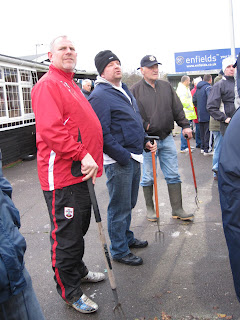 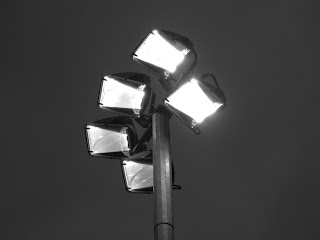 I can't help it. I'm on floodlight medication to try and stop it. 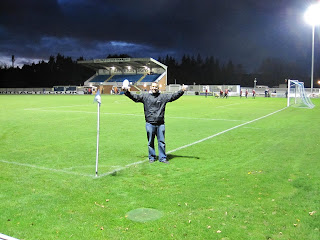 Whoops! On the pitch again - stewards eject this man.

The weather was fine in Spoons opposite the station after the game. At £1.79 a pint for the 11 (eleven) bitters on offer the price was alright as well. A predictable pub crawl then ensued - calling in at HQ for lacklustre Ireland v France in the World Cup qualifier before ending up back at EFW Towers for a night of 1860 Munich reserve DVDs long into the night. Bloody perfect.

Oh, I almost forgot. On the way home we meet up with the four members of Brighton band 'Escape to Sea'. Already being mentioned in the same breath as The Pixies, these lads are set for stardom. Today the Free Butt, tomorrow Wembley Stadium. Check out their myspace page and get set to swing a fast shoe to the Kings of Ambient Mosh. 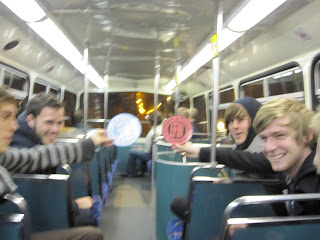 Escape to Sea - The Kings of Ambient Mosh and no mistake.

For the Ball is Round version of the day CLICK ME

Thanks to James Boyes for the good photo!