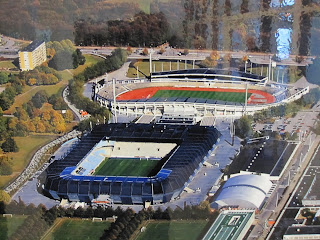 IFK - The Pride of Malmo

- click on photos to enlarge image -
Don't stress yourself too much about getting a match ticket for IFK Malmo. Their average crowd of around 100 can fit quite comfortably into the Malmo Stadion - capacity 27,500. They're a club who subscribe to the old 'fallen on hard times' chestnut. As they've plummeted down the divisions, nearly everyone has given up on them. That is, aside from a few nutters. Hi ya!

With Sweden having failed to qualify for the World Cup, football wasn't uppermost in the thoughts of the people of Malmo again for this game - in the fifth level of Swedish football. Talking of the World Cup though, IFK do have quite a claim to fame in that department. In 1958 (stick with this one - Ed), Germany played Argentina in Malmo. Germany's kit clashed with Argentina's but they refused to change it (typical Germans eh Fergie!) and therefore Argentina had to play in a borrowed kit from - IFK Malmo. I bored everyone with that story over the weekend.

This was a bonus match for me. I hadn't actually flown in especially for this game but as I was in the area with my wife and Sister then, weeeell....why not take in a game eh? Beats shopping that's for sure. As I wasn't initially with any lads, my pre-match routine of working through a menu of beer was replaced by drinking in some local culture instead. The Oresund Bridge, Turning Turso, Western Harbour, Malmohus Castle, Slottsparken, Lilla Torg and Stortorget were all ticked off before I drew the line at shopping and headed off for the football. 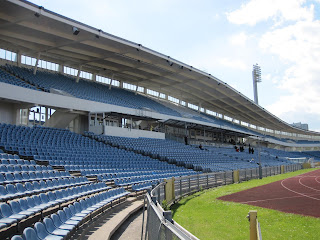 The Malmo Stadion. Choose any seat you like but remember the history. 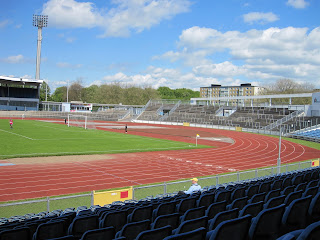 One man and his cap. 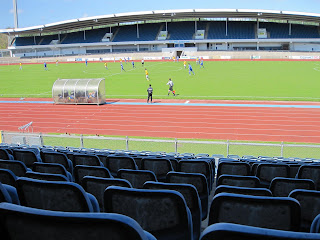 Hello.....anybody home?
EFW is making a bit of a name for itself in Sweden after being featured on the SvenskaFans website a couple of times lately, which is the biggest football site in the country. As such, news of my visit had attracted the attention of both Per-Gunnar Nilsson (who has his own very good football website) and Sven Persson - the later of which is part of the Scandinavian Barnet Supporters Club. No really, it's true. I met both lads before the game.

Sven drove me to the game and we bonded instantly because within four minutes of meeting him, he made a small diversion to IFK Malmo's old IP Stadium. Nowadays it is used by LdB FC Malmo in the Swedish Women's Premier League. After a routine snap on the pitch we moved onto another stadium which was adjacent to the actual ground we were going to. Are you keeping up at the back? Simon Inglis would have been having kittens. Three grounds in 30 minutes. Phwoar!

Malmo FF are the big cheeses of Malmo. They recently moved out of the Malmo Stadion (where IFK now play) and into the all singing and dancing Swedbank Stadion - literally next door. I asked a couple of people if I could have a look inside but they refused. What a pompous, jobsworth bunch of absolute knob-jockeys. I hate Malmo FF - for now anyway. "Shove your Swedbank" I said, I'm off to see a proper club - IFK.

And with that, we headed next door for the IFK v Nosaby game and within seconds were personally greeted by the Chairman Lars Holmberg and a number of other staff who simply couldn't do enough for us. Shove that up you ars....(alright that's enough - sensible Ed).

How many grounds of this size have a mobile club shop that is wheeled in by four lovely old ladies in a shopping trolley? That's IFK style and they had biscuits (biscuits!) as well. No beer though. Oh. 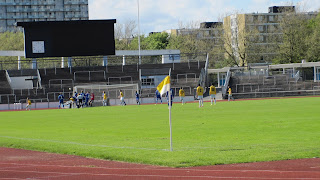 The electronic scoreboard was erm.....switched off for the day. 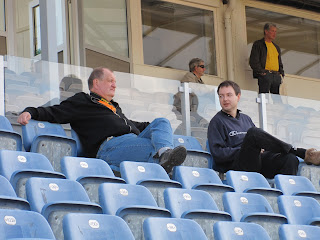 Sven and Per-Gunnar soak it all up. 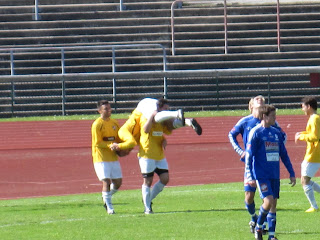 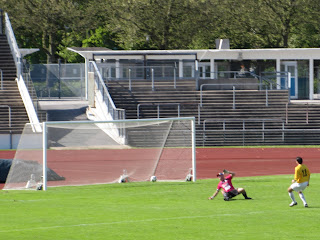 ...make that 3-0.
Per-Gunnar had come 65km for this game. He actually works with he Nosaby Manager and three of the away teams players were his pupils -he being a teacher. They thought he was a mentalist for coming that far to see them play. When he then told them I'd come from England to watch, they were so dumbstruck, it took them 74 minutes to recover. By then they were 3-0 down. Arf.

Nosaby normally play at grounds that are nothing more than roped off pitches. So when they took to the pitch in this - to them - enormous ground, they were all nudging each other and giggling like school children. They walked to the centre of the pitch and waved to the non-existent crowd - chuckling with their every move.

You don't want me to talk you through the game do you? (nope - Ed). I'll just say that the first half was scintillating, swashbuckling football like on the Nike advert and that. Actually, it wasn't great but in fairness, things picked up in the second half and 5 (five) goals later - the crowd of around 70 were on their feet applauding what - in the end - had been a belting game of football.

IFK are a historic team and this stadium has bags of history. It's a real shame to see a club that was once amongst the elite in Sweden sink so low. They need to move grounds and that's for sure. It's just too surreal seeing them play at that place. I'm not too sure what the future holds for them but unlike the snobs from Malmo FF next door, they'd made EFW feel really welcome and for that reason alone - on this Saturday afternoon anyway - they were in my eyes: the pride of Malmo.

PGN's fine panoramic photo of the Malmo Stadion. Click to enlarge and enjoy!
For more photos from the day CLICK ME

Feel free to leave a comment below
Posted by Danny Last at 14:16

If you've built up a thirst for some Swedish football then you could do worse than head to this new website:

Some great info there from the makers of The Ball is Round Blog (www.theballisround.co.uk)

I feel bad for this club, and as you say it becomes completely surreal playing where Lars Elstrup scored the winner that gave us Danes the first of the two wins that sealed the Euro Trophy!

Glad you had a stop at Malmö IP. I kind a like that stadium. Saw Brommapojkarna against Limhamn/Bunkeflo two seasons ago, when they still served green grass with pot holes. I remember the match programme rallied for the hometeam to play their matches at their real home ground, but eventually relegation brought them back to Limhamns IP. But did you get any suggestions on why they are playing in Malmö Stadion and not the IP, apart from the plastic pitch?

Great you had some sun. Somehow the sun seems to shine more on that side. I guess Zlatan is pulling strings.

I had a word with the Chairman about returning to IP. He wants to go back - as do the fan(s) - but as usual it's a matter of finance. I think they play at the current Malmo Stadion for free whereas they'd have to pay to go back and play at IP. The club clearly don't have any money and that is unlikely to change in the foreseeable future with crowds of around 100.

The City is big enough to support two teams surely?

Maybe if they sold beer inside the crowds would return ;-)

A nice interesting article, I love reading about Swedish football and my own city from different perspectives.

Obviously the people from IFK didn't tell you the whole story though. IFK Malmö have historically been the snobbish, arrogant upper-class team of Malmö and it is this attitude that has put them where they are now, surpassed by FC Malmö, FC Rosengård and Limhamn/Bunkeflo, all Malmö teams playing in higher divisions.

I love Malmö Stadion, a place where you can almost feel the strokes of history, many great games have been played there, including some legendary games of the Malmö FF '79 EC adventure. Unfortunately it's probably going to be demolished soon.

@Torbjorn- Firstly, thanks for taking the time to comment. Secondly, well done for not biting to the headline. Like most of this site, it's a little ironic and not to be taken too seriously. Lastly, nice to have another perspective on the downward spiral that is IFK. I don't pretend to be an expert on their slide down the leagues so good to have another opinion.

I take it Malmo FF concentrate on their rivalry with Helsinborgs these days? That is a game I hope to attend in the near future.

You should come and see the game between Malmö FF and Helsingborg in September. That game is probably going to decide where the gold goes. HIF is currently leading the table and MFF is trailing by 5 points.

B.T.W. IFK Malmö is where they belong. :D

There was an intersting story on the local TV-news tonight. Apparently the Argentinian FA want a IFK Malmö shirt they used in 1958for their new football museum. Lars Holmberg was on the news and if they can find a shirt they will get a signed Argentina shirt in return. Every player including Maradona will sign the shirt and I guess IFK Malmö can make some decent money from that shirt if they want to.

@David - That match has been on my radar for sometime. I know you won't like it but the last time I was over in Sweden I went to see HIF:

The fans there also said the game to come back and see was the game against Malmo FF. Don't forget I don't support any team in Sweden (my team is actually Lewes FC in the Conference South, no harm to anyone ;-D ).

I can see that a link to this article was posted on a Malmo FF forum. My translator isn't very good, are the fans there now discussing if IFK can still be considered rivals? Can you enlighten me please?

@PGN - That is a fantastic story!

Your link was posted on the biggest MFF forum on the net. :)

The thing about IFK Malmö is that they now are'nt considered as rivals, if you are'nt born in the 30's or 40's. IFK and MFF had a "project" together last year where IFK could lend players from MFF. The goal was to get IFK to Superettan but the project was cancelled after about 6 months since it did'nt work. Some say that it didn't work because there still are older supporters in the clubs boards that doesn't like IFK/MFF.
The supporters that supported MFF from the 30's to the mid 60's still doesn't like IFK Malmö and IFK Norrköping. If you started to support MFF in the 70's and 80's you dont like IFK Göteborg and if you started to support MFF in the mid-90's you don't like HIF.

It's now full chaos in IFK Malmö. Arsim Arifi started to fight with the captain, Mustafa Arezoo, on the field, in the game against FC Malmö!
And that has now lead to that the coach and ass. coach leaves the team. Funny thing is that the new coach is Kenneth Folkesson wich is in charge of materials in MFF.