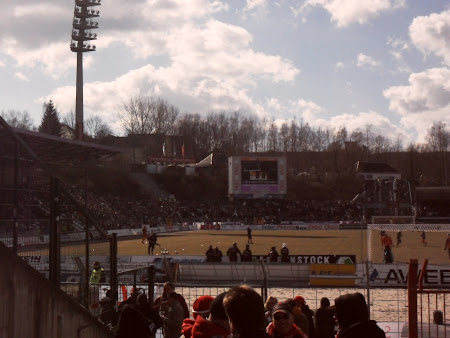 Any old Eisern
Erzgebirge Aue 0-0 Union Berlin (06:03:11)
FC Union Berlin are fast becoming our house band here at European Football Weekends. We make no apologies for that though - we love them. As does our good friend Dave Tunnicliffe who followed them on the road again this week...
As a Union Berlin fan living in Leipzig, this had been one of the games I had most been looking forward to before the start of the season: an away trip to FC Erzgebirge Aue. Aue are one of the most successful teams from the former East Germany. They won the Oberliga title four times and were therefore regular participants in the early years of the European Cup. Since the break-up of the GDR, the club were stalwarts in the third tier Regionalliga before 5 successful years in the 2. Bundesliga. After a break of two seasons in the newly-formed 3. Liga, the club won promotion back to the second tier last season and only just missed out on the title to Osnabrueck on the final day. 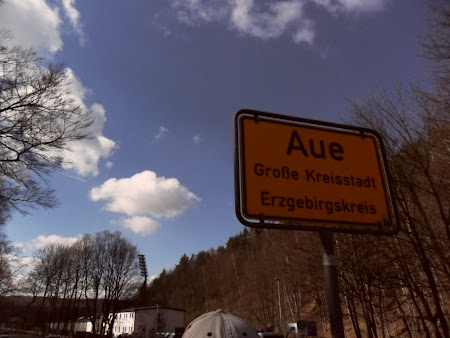 The city is around 90 minutes by car from Leipzig and is situated extremely close to the Czech border. Our proximity to the Czech Republic was confirmed when one of my friends got a “Welcome to O2 Czech Republic” text on the way. The name Erzgebirge is taken from the mountains (“Erzgebirge” literally means iron ore mountains) where the town is located, and many fans wear miners helmets to games as a nod to the roots of their support. Incidentally, 'town' is definitely the right word for the place as, despite their comparatively successful football team, the place only has a population of 18,000. The club has historically drawn its support from surrounding areas and towns, and from the neighbouring cities of Zwickau and Chemnitz. Although I have only ever been from railway station to the ground and back, I quite like the place personally. My favourite stat about Aue goes back to the times of the GDR. In 1954, the authorities suddenly decided to move the successful Aue team from their home to Karl-Marx Stadt (now Chemnitz) to provide the latter, the industrial capital of Saxony, with a team to match its status as a city. Unusually for the time, there was a great deal of dismay and anger about the decision from the people and the fans of Aue (then called Wismut Aue). There were protests against the decision and, even more unusually for the time, the authorities backtracked on the decision. They did, however, insist that the team was renamed Wismut Karl-Marx Stadt which led to a rather absurd situation where a team based in Aue played under the name of a city lying 100km away with which there had never been any connection whatsoever. It sounds like something from Pete Winkleman's CV. 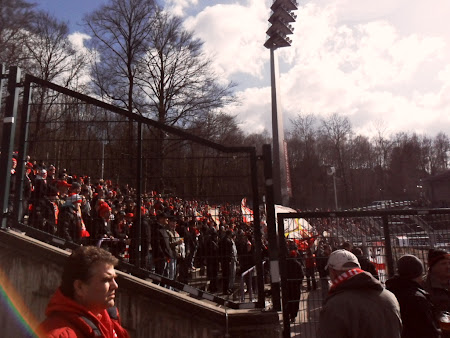 The Erzgebirgestadion sits in a natural bowl surrounded by mountains and the journey from the north is pleasant. It certainly helped that the weather on the day of the match was absolutely glorious. This is one of Union Berlin's closest away games of the season and all tickets for the away end had been sold out within a week. Predictions on total numbers were somewhere between 2,000 and 3,000. Due to Aue's relative success this season, the home end was also expected to be full and as we headed towards the car park surrounded by red-clad Berliners, the anticipation was building. I must admit, I'm a sucker for a good set of floodlights and the ones at Aue are some of the best I've seen (honourable mentions to Carl-Zeiss Jena and Dynamo Dresden's old stadium). It's almost the shame that the game wasn't in the evening and that they didn't need to be turned on. Another interesting fact about the ground is that Aue purchased their massive video scoreboard from Schalke when Schalke built their new ground in 2001.
The first disappointment on the day was the fact that only non-alcoholic beer would be served at the ground. Once in the ground, this would obviously be annoying, but Union fans merely waited outside for as long as possible and drank copious amounts of the Berliner Pilnser that was being served and sold from the boots of the supporters coaches. The overbearing police presence also seemed to be a little over the top considering that there is no real history of violence or hate between the two clubs. Unfortunately, overzealous policing seems to be a growing trend in Germany (see HSV – St. Pauli, 1860 Munich in Aue the other week and, to a broader extent, the protests against the rebuilding of Stuttgart railway station) and I would hate it if continued and became like watching league football in the U.K. Anyway, after a couple of beers outside to whet the whistle, we headed inside to get an impression of the stadium. 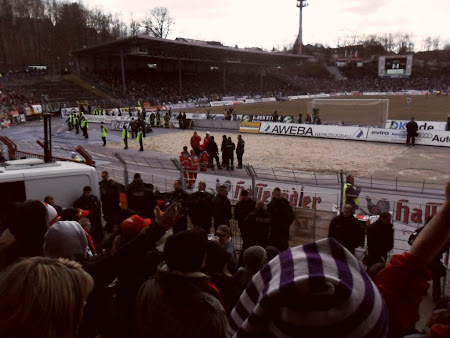 It soon became clear how many Union fans were actually at the game. The away block was completely full and there must have been another 1,000 in the neighbouring stand (where I was stood) and dotted around the ground. The fact that Union had 'taken over' a little bit of the home end did not go down fantastically with a few Aue fans and this probably caused the only little bit of trouble I saw all afternoon (although it was nothing more than a scuffle). As I say, there's no real hate there. The only real disdain is because Aue is in Saxony (lots of Germans think it's a bit...well, scummy), so there were a few songs about that, including the catchy number “You're Saxons, asocial Saxons, you sleep under bridges, or in the homeless shelter.” (sang to the tune of the famous St. Pauli song) I must admit I couldn't sing along with that one...I live in and love Saxony.
Going into the game, Erzgebirge Aue were riding high in the table and fighting for an almost unthinkable promotion to the Bundesliga. They have, however, had a reputation this season for getting the rub of the green and have already won four games this season 1-0 with goals in the last ten minutes. Union were still threatened by relegation and, despite recent good results (wins at Hertha and Duisburg), still have a tendency to throw it away all too easily (see: 0-1 home defeat to 1860 Munich last week). The match was pretty boring to be honest, with both sides having half chances to take the three points. My personal highlight was watching 5'6” bald Albanian Skerdilaid Curri 'scurry' around the pitch. From a distance he bore a distinct resemblance to one-time Villa left-back Alan Wright. 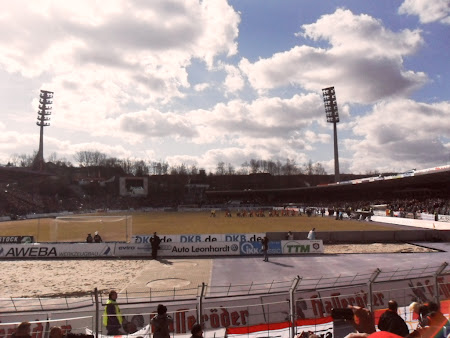 The result was fair for both teams and, on leaving the ground many Aue fans said they were looking forward to seeing us next year. They seem resigned to Aue not achieving promotion but, to be honest, I think it would a step too far at the current time. I do not share the Aue fans' confidence in Union staying up though, despite the recent strong showings. Both Ingolstadt and Biefeld (finally!) won at the weekend and the distance between Union and the direct relegation zone is only 7 points. It would be all too easy for any of Union, Paderborn, Osnabrueck or Oberhausen to get sucked into the battle. The next two home games are critical (Bielefeld and Augsburg) for Union's chances.
Pessimism is surely the best way of thinking for any football, to avoid the inevitable disappointment. Still, I hope we will be able to make the trip down to Aue again next season.
Follow Dave and European Football Weekends on Twitter
Read more of Dave's work at the Ostklassiker
- Feel free to comment below -
Posted by Danny Last at 12:22

Great piece Dave, I was gutted I couldn't make it. The biggest worry from the day is Christian Stuff being ruled out for the rest of the season. He has been a monster at centreback all year, he'll be missed. My piece about the game is here if anyone needs more eisern in their lives
http://www.exberliner.com/articles/the-managers%27-gamble

Dave, marry me! Just love ya!

Thanks for the comments everyone.

@Jake (I presume??) Stuff's loss is massive. We need at least 4 points from the next two home games (win against Bielefeld is an absolute must). Something at Oberhausen would be proper special, I think 7 points from those three games would allay my fears a little...