A Tusca-knees up in Siena 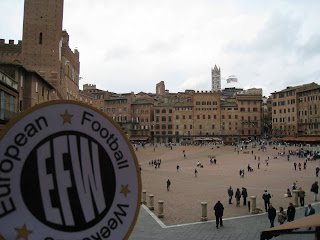 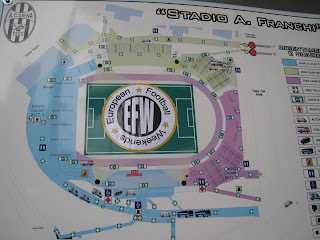 I'm guessing most peoples idea of an Italian football match would be of an ultra fest, complete with organised ambushes of trains carrying visiting fans and general 70's style naughtiness!? To be fair - out of the four games I'd previously seen there - I'd only seen that occur twice (cheers Napoli). The Sienese football experience however is one of relative calm in comparison.

I picked up my match ticket the day before the game, as one has to do in Italy. I had a choice of three prices: 22 Euros for the Curvas (yes please), 38 Euros elsewhere other than the main stand which would have set me back an astonishing 143 Euros! What do you get for coughing up an additional 121 Euros!? A roof and a blue seat as opposed to a green one. A tad excessive possibly, however all the gate money for this match went to the L'Aquila earthquake appeal so hats off to anyone who could afford 143 big ones.

Like all good Sunday mornings abroad, my match day started with a trip to a flea market, haggling over the price of antique nude 'nudi' postcards and old Italian football badges. All the best local bars tend be located near to flea markets and the very best of those will invariably have a group of shady looking blokes standing outside. Bar Salicotto fitted that bill nicely and so in I went for Marrquino and a large cake full of lashings of custard.

After a large Birra Morreti overlooking the glorious Piazza del Campo it was time to head to another local bar for local people. The Osteria 'Il Grattacielo' had attracted a few pre-match punters and in there I helped myself to half a litre of very passable red wine and chatted with some of the Siena ultras from the Robur 1904. Fans of facts might like to know that 'Robur' means 'strength' and 1904 was the year AC Siena were formed. 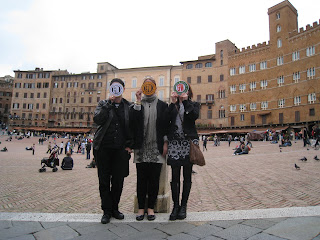 Vicky, Anna (sister) and my wife (Ana) in the Piazza del Campo. 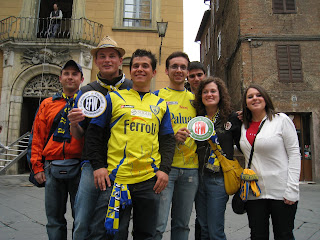 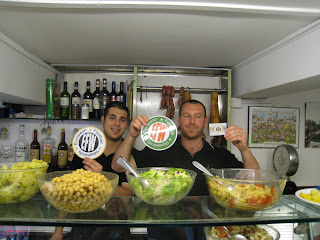 The lads at the Osteria 'Il Grattacielo' 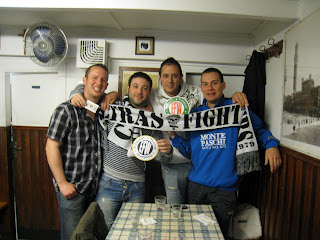 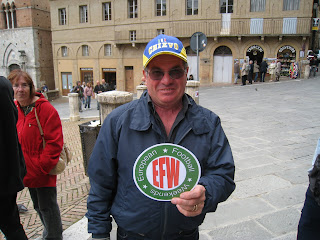 By this time everybody wanted a piece of the EFW action. 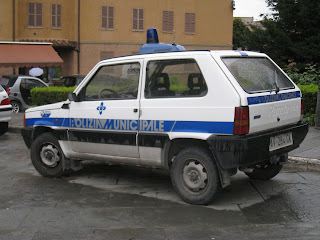 No wonder there wasn't any trouble with this show of force from the Carabinieri.

Entering a ground in Italy isn't always as straight forwards as it should be. It can take a dogs age to queue to get in. Mob rule can overtake at some grounds - mentioning no names *cough* Napoli - but here in Siena it was polite pushing and shoving. No passport = no entry so remember to take yours with you next time you pitch up at a Serie A game.

Inside there are lots of green seated temporary looking stands. There are 13 (thirteen!) of various sizes in total. The ground is also surrounded by lots of trees - The Theatre of Trees? - and I would say resembles the 16th green at Augusta National golf course (would you now you lunatic - Ed).

Disappointingly for an Italian ground there weren't many cars parked randomly around the pitch. This happens a lot in Italy. We did have 1 x fire engine though which was nice. I also noticed that the hanging up of flags and banners in the stadium was treated very seriously. For this job 5 (five!) stewards were employed for nearly each stand.

The Robur 1904 boys in the Curva Robur were in fine voice throughout. None of your aggressive singing that sometimes accompanies games in Italy - Napoli springs to mind - not a note out of tune for these boys. They did treat us to a version of Mike Oldfields 'Moonlight Shadow' though which disturbingly seems to be the norm in a lot of European Stadiums these days. The 329 Chievo fans also sang throughout. Ultras down the front of their stand, Mums and Dads to the back as per usual.

My favourite Siena fan was a Jimmy Saville look-a-like in a red jumper. He got through roughly 23 ciggies each half and had a superb array of hand gestures. He threw shapes with his arms - in between smoking - that I didn't even know existed. I bet he looks good on the dancefloor. 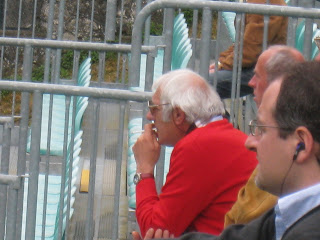 Siena is a City that welcomes visitors with open arms. Unfortunately for them, AC Siena's defence also extended a warm welcome to Chievo forwards. It was help yourself time for Sergio Pellissier whose brace sealed the points for the away side. The second goal was a beauty after di Rigioni had collected a gift in the form of the ball from the Bianconeri and waltzed unchallenged for what seemed liked days before setting up the Pellster who picked the perfect club to loft the ball over the advancing keeper.

As conditions worsened during the 2nd half - due to heavy rain - we were treated to one tremendous sliding tackle that took the lino clean out. Nobody likes to see the lino land flat on his face, least of all me *snigger*. This prompted a 10 minute version of the English national anthem from the travelling Chievo fans. Good old European Football. 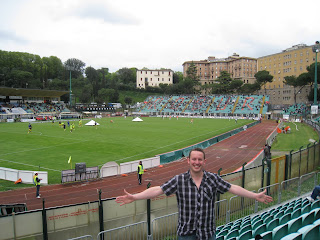 Your host inside the Stadio and full of red wine - hence silly grin/arms out wide stance. 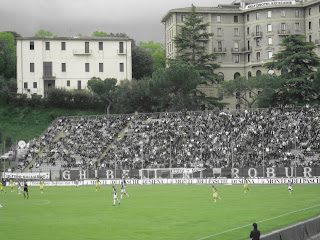 Give me strength - it's the Robur Curva. 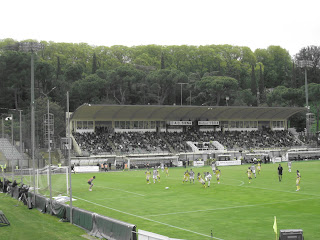 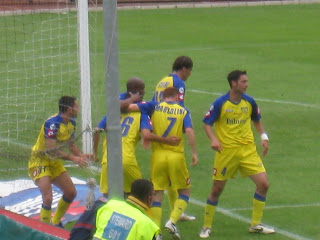 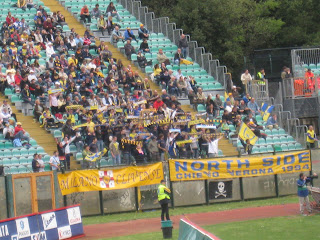 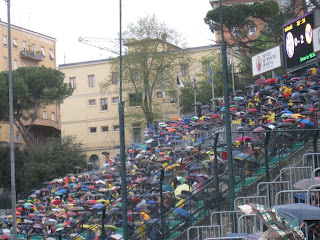 The 16th at the Augusta National or Gradinata Paolo De Luca!?

The great thing about the location of the Stadio Artemio Franchi is that within seven minutes of the referee blowing his full time whistle, I was back in town sipping 7.2% Elephant beer in the San Paolo pub in the centre of town with the wife. We then partook in a five course medieval banquet in the Gallero Nero complete with litres of wine for the princely sum of around 12 buttons. Seriously what's not to like!?

As my apartment was only a couple of minutes from the ground. I went back the next day - just briefly - to try and break into the ground and get onto the pitch. Breaking in was a piece of cake (I'm very good at this) but getting on the pitch was impossible. One of the things I love about countries like Italy and Spain is that groups of old men get together and talk nonsense to each other all day. I am going to sign up for some of this in my days as a senior citizen. They normally do it in bars, bus stops, park benches wherever. In Siena though a group of them meet up everyday inside the football stadium in one of the 13 (thirteen) stands and talk about football all day. Here they are - three of them proudly holding the EFW logo. This dear reader is me in fourty-five years time hopefully. Arrivederci. 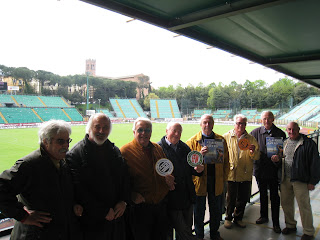 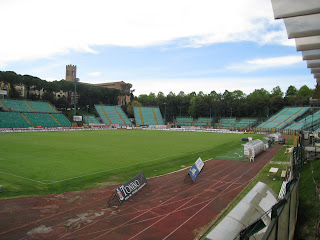 The day after the game looking out at some of the 13 (thirteen) stands. 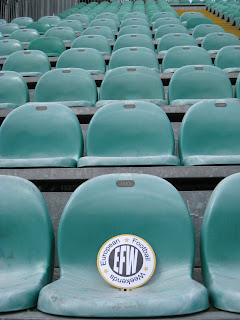 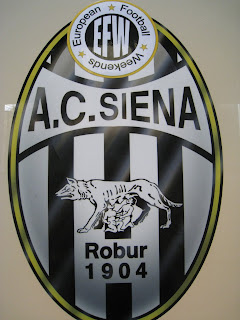 Email ThisBlogThis!Share to TwitterShare to FacebookShare to Pinterest
Labels: Chievo, Football in Italy, Serie A, Siena

Fellow Albion fan here who was also at the Siena v Chievo game earlier this year!
I've done a mini review of this game in the current issue of TSLR.