On the piste in Grenoble - God Alps us all 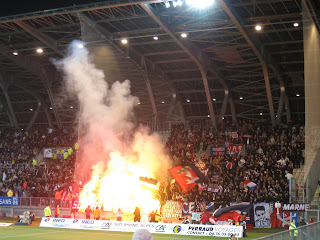 Grenoble Foot 38 0-0 Paris Saint-Germain (21:02:09)
In the run up to this game - I hated Grenoble Foot 38. They withdrew internet tickets sales for the match, didn't answer any emails and refused to answer their phone. They became the most inaccessible club in Europe.

So why did they do it!? Well, evidently the world and their wives are scared of the Paris Saint-Germain fans. They have a - some say justified - reputation for hooliganism. Opposition clubs, the National Gendarmerie, Inspector Clouseau and even the government are wary of them.

In the end we were indebted to Stephane Lievens for sorting us out with tickets. Our (French speaking) friend from the EFW Facebook site worked tirelessly for weeks trying to get hold of someone at GF38. Eventually - a couple of days before the game - they gave in to his persistence and agreed to keep three tickets by for us to pick up at the stadium. We had to be there five hours before kick off to pick them up mind you or the deal was off.

Blimey, I've been serious now for a record equalling three paragraphs....and relax. So where on earth is Grenoble and who are Grenoble Foot 38 - surely one of the most splendid names in football!? Well, the City is situated in Southeastern France at the foot of the Alps and the football team was formed in 1997 after a merger of Olympique Grenoble Isere and Norcap Olympique. Why all the 'Olympique' references I hear you ask (really!? - Ed) - that'll be because the City of Grenoble once hosted the Winter Olympics in 1968. I thank you. The '38' refers to the postal district of Grenoble. I thank you once more.

To get there - Big Deaks, Nicky Boy and I flew into Lyon Airport from Gatwick at a very unsociable 06:35am. Easy Jet got us there early (early!) doors, which was nice. We then picked up a hire car and Nick 'the wheels' Waterhouse drove us down to Grenoble. First impressions were very favourable. It's a stunning place surrounded by mountains - as one might expect in the Alps. However - we hadn't come here to ski or become gays on trays (snowboarders) - we were here for some European Football.

First up we had to pick up our tickets. After all the fuss it was anyone's guess if we'd actually lay our hands on them. The ground looked a picture with the sunshine bouncing off from the solar panelled (hello to you) roof. The stadium was situated next to a large park which had red squirrels running around dealing with their nuts. The moment of truth had arrived and I was in the zone. Armed with my best French accent I dealt with the ticketing issue in hand and without any complications we were in. Three lovely match tickets in the bag. We would go to the ball after all. Lovely job. 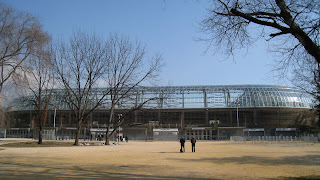 Solar panel roof - tick.
Hotel admin completed we headed down by the riverside to a family run restaurant and helped ourselves to some local cuisine and a couple of well deserved beers. After that we had five hours to fill before the match. A pub crawl anyone!? Rather. First up we were served some reassuringly expensive pints of Edelweiss by former Smiths miserablist, veggie sausage jockey, sardonic lyric liking Morrissey or rather by someone who looked quite like him.

More and more pubs followed as we slowly made our way to the ground. There appeared to be a large mountain at the end of every street. It really was a delightful setting for a pre-match session. At one stage - between pubs - we found ourselves joining in on a Communist march through the streets. When in France eh!?

At the ground there were 350 police on duty for this Grade A match. A helicopter flew overhead and there were reports of some trouble before the match which was later confirmed in the local paper. We didn't see any violence though and everybody we met was as good as gold. 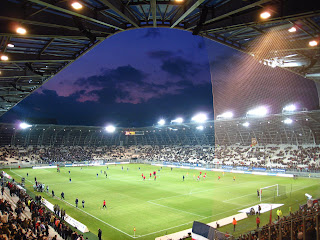 All looks rather nice doesn't it!?
Once inside, we made our way to the VIP section (as I say, beer had been taken) and pulled out our EFW business cards. Nick the wheels asked if we could have a look behind the scenes just for a giggle. What followed surprised me somewhat. The head of security said he'd heard of the European Football Weekends website and that this wouldn't be a problem. So in we jolly well went. Luckily, the comment Nick made about it all looking a bit 'sterile' was lost in translation. We made our way through all the sponsors areas and eventually ended up in the players lounge. A bright white room with some ghastly looking sofas and five bottles of champers on a table. 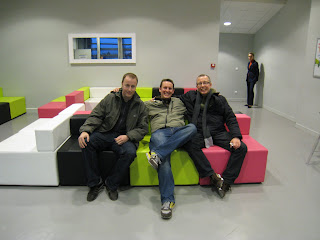 The players lounge (nb players not in picture). L-R Big Deaks, Myself (Danny) and Nick the wheels.
As usual I won't dwell too much on the match itself. There was a brief outbreak of football in the last ten minutes but aside from that it wasn't the best. Grenners Footers (as they are not known as) were well chuffed with their good point well made though. As well they might be as PSG had won their previous four matches in a row and were in serious danger of removing Lyon from top spot in Ligue 1 for the first time in umpty thrumpty years. 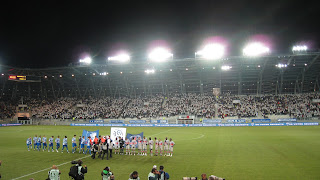 Lets get ready to rumble.
On European Football Weekends, you can normally always rely on the fans to provide some alternative entertainment to the football. They didn't disappoint here I can tell you. It was relentless, non stop singing, flares, pyrotechnics, the works for ninety minutes. FANtastic effort from both teams. Behind the goal where the hardcore GF38 fans sat were two flags which to the uninitiated looked like drawings of both Tommy Cooper and Juliet Bravo. What's not to like!? 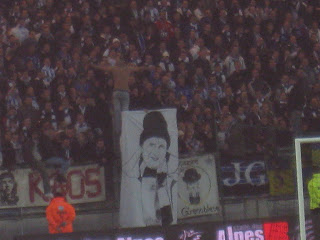 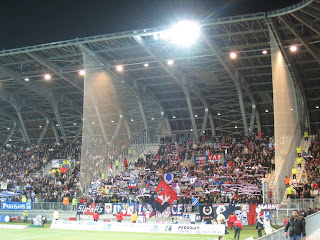 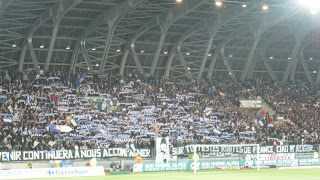 GF38 fans.
After the game we walked back into town and embarked in another welcome pub crawl. The pubs got better and better. We'd been up for 22 hours but I'm happy to report we did make it until closing time and furthermore we weren't really that drunk AND we could still see. This might have been something to do with downgrading our beers to Stella at the end of the night from the Leffe we'd been quaffing earlier. Sensible. 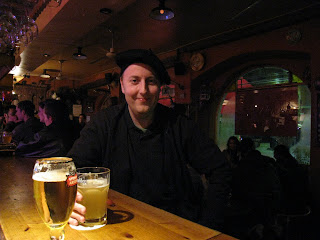 Big Deaks in his beret.
So a huge tick in the box to Grenoble and all the fans, bar staff, Morrissey look-a-likes and punters we met there. A really nice City with friendly people and a fancy new stadium to boot. Next up for us the following day was another match in Ligue 1, namely St Etienne v Bordeaux. Good old life! 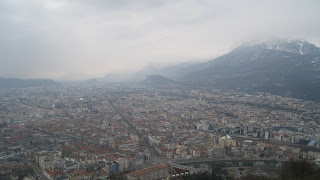 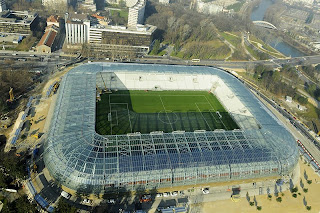 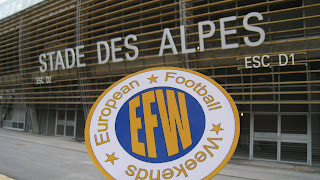 Yet another quality post mate being skint all the time im one Jealous footie fan wishing i was jumping over the channel to watch some proper footie without the stupid H&S shit we have to put up with here.
ie. Away to Stockport County with my Beloved Oxford only 150 of us there yet being told to sit down or get chcuked even though as a 6ft4 24 stone man i was rather uncomfy on seats bolted onto a old terrace.

Keep Up The Good Work Bud!

Nice to see 'Hotel Admin' being featured. Big chuckles at Deaks in that beret. Simpsonio.

Thanks for the mention mate, I'm glad I contributed to yet another great trip of yours!

Tommy Cooper (left) and Juliet Bravo (right) flags. Possibly
they are simply Luisetti Mr Roger, former player and supportuer of GF38 who died a week earlier, the minute's silence was him.
The second picture is the sign of GF38 girls fans!
for places, it was very difficult to obtain because of the "pack" that includes several games had been sold before and the coming of the PSG is the first in the Alps.
Bravo for your reporting
Thierry la ouais !! du Red Kaos 94