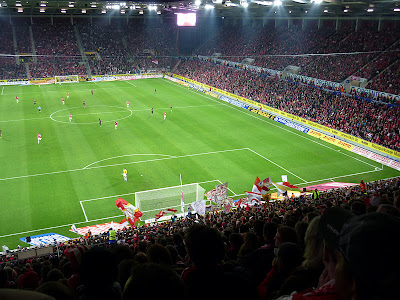 'Cause You're A-MAINZ-ing Just The Way You Are
FSV Mainz 05 3-1 VfB Stuttgart (04:11:11)
Making his debut for European Football Weekends, Everton fan Phil Naylor. *applause*
Like a lot of people I know, I'd never really considered Germany as a holiday destination before the 2006 World Cup but, after having such a fantastic time there, I take every opportunity to go back. Our base in 2006 was the city of Mainz and that has become a particular favourite. The local side, 1.FSV Mainz 05, have been on the up for the last few years, culminating in the construction of the 33,000 capacity Coface Arena prior to the start of this season. The chance to visit this shiny, new stadium therefore provided me and three friends with the perfect excuse for a weekend away.
A pre-dawn Eurostar via Brussels and Cologne had us arriving in Mainz early on Friday afternoon ahead of the evening kick-off against Stuttgart. Match tickets had been bought in advance through the club's online ticket shop so we headed straight to the Eisgrub, Mainz's outstanding brewpub for a late lunch. Can there be a better way to spend Friday afternoon than drinking 5 litre towers of beer and eating platefuls of German pub food? 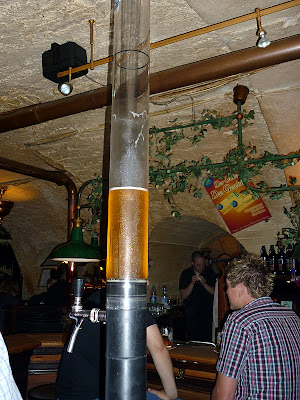 Just the one pre-match beer
Free shuttle buses run to the stadium from the main station or alternatively you can have an extra drink in the pub and pay around €12 in a taxi. No prizes for guessing the option we went with! As new grounds go, the Coface Arena is a fairly attractive stadium but the signage could be better as it took us a while to find our section. A downside to our late arrival was that the terrace we had tickets for was virtually full by the time we turned up but we managed to find a vantage spot at the very back. Beers in hand (the purchase of which, annoyingly, requires you to first acquire a stadium card), we watched an even first half end scoreless.
No doubt inspired by the mini Zeppelin flying around the stadium at half time, the two teams emerged from the break to produce a cracker of a second half. The fun started when Cacau, Stuttgart's Brazilian-German striker, turned in a low cross to give the away team the lead. The Stuttgart celebrations, however, were short-lived as Mainz hit back in style. Firstly Anthony Ujah's first ever Bundesliga goal levelled the scores before a ridiculously soft penalty decision gave Andreas Ivanschitz the chance to put Mainz ahead. Within minutes Ujah took advantage of hesitation in the Stuttgart defence to steal in for his second and Mainz's third. By now the Coface was bouncing as the Mainz supporters sensed their first home win since the opening day of the season. A late straight red for Mainz's Polanski didn't affect the outcome and we disappeared into the night to begin the post-match celebrations with chants of “Ujah, Ujah” ringing in our ears. 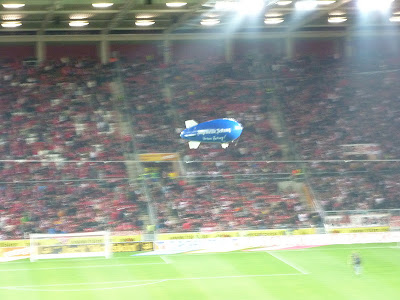 I've gotta whole lotta love for this half time entertainment
My inability to find, let alone operate, the controls for the blinds in our hotel room contributed to a fitful night's sleep despite our early start. Partially as a result of this we opted out of jumping on a train to take in a game on Saturday but instead decided to spend the day in Mainz. It's a lovely place and we moved from sipping local wines at a market stall in the shadow of the cathedral onto sampling the delights of Mainz's various hostelries while watching an assortment of televised Bundesliga and Premier League action.
FSV Frankfurt 0-0 Hansa Rostock (06:11:11) 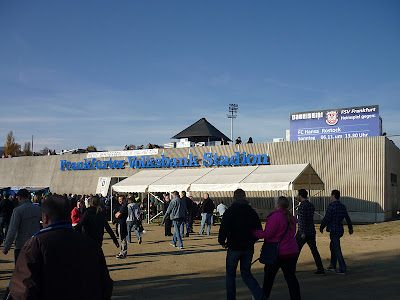 After a better night’s rest, Sunday began with a vast buffet breakfast before we made our way to Frankfurt for a lunchtime encounter between FSV Frankfurt and Hansa Rostock, two sides hovering just above the relegation zone in the 2. Bundesliga. At only €9 each the tickets were a bargain, particularly as they included all our local transport for the day. Two very pleasant hours were then spent in a half full Volksbank Stadion enjoying the sunshine on the open terrace.
Sadly, the actual football didn't live up to the occasion as the two teams played out a fairly dire 0-0 draw. The only real entertainment came from the 1500 or so away fans who sang almost non-stop, which was in marked contrast to the apathetic FSV supporters. The ambience in the home end was more akin to a county cricket match, with fans eating, drinking and chatting and seemingly only half paying attention to the action. Fortunately, however, the lack of atmosphere and action were compensated for by the short queues at the beer stalls. When the final whistle went we headed for the nearby U-Bahn station and a quick schnitzel-stop in a Frankfurt pub before making our way to the airport for our flights home. All in all, a very enjoyable weekend and one I would highly recommend to anyone. 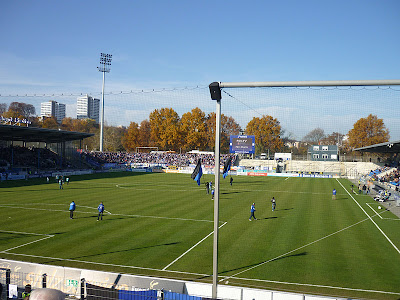