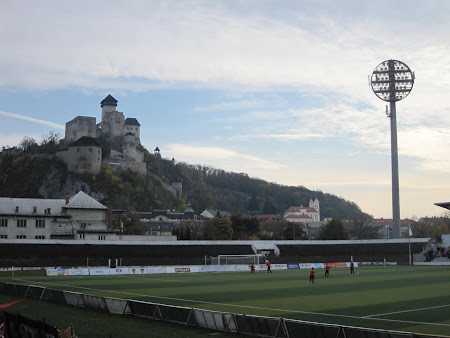 Teši ma AS Trencin!*
AS Trenčín 2-1 MFK Petrzalka (23:10:10)
Flying to Budapest before hiring a coach to take twenty-nine chaps on a four-hour journey to watch a Slovak Division Two match is a bit bonkers, but it's what I do. I lay the blame squarely at the feet of Peterjon Cresswell and Simon Evans. They got me into this whole sorry mess in 1997 by writing the Rough Guide to European Football. I've not looked back since.
This was a special day even by EFW standards. Later in the day we'd pitch up at Spartak Trnava for another match, but for now our thoughts were with AS Trenčín and their wonderful Štadión na Sihoti which - save for an artificial pitch - is one of the best little grounds I've ever been to, and I've been to a few.
Those present on this trip will probably always remember that coach journey. Leaving no stone unturned in preparation, I'd punched the details into Google Maps and their little box of tricks returned a journey time of three hours from Budapest. I can now tell you that Google Maps doesn't factor in Hungary's slowest-coach into their journey times. It took well over four hours and we arrived late for the kick-off. I tendered my resignation as Editor of EFW there and then, and that is still up for discussion as I type. Sniff.
Now then, how to appease an angry mob of punters? Beer obviously. There was lots of that. Which meant more stops as the on-board toilet was broken. And bingo, obviously. Ah, bingo. This wasn't my idea, but that of Maria - our hostest with the mostest for the day. She'd long given up on explaining the history of this and indeed that en route, and had resorted to bingo to pass the time. She did so along with the admirable help of her glamorous assistant Stoffers - officially the nicest bloke in the world; German, 1860 Munich fan, wicked sense of humour etcetera. 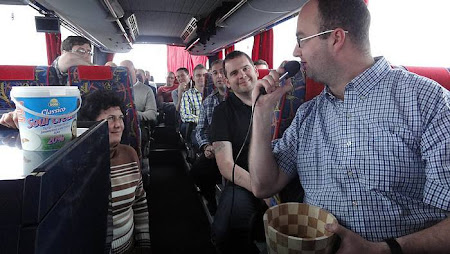 Anyone for bingo? Stoffers and Maria's eyes meet across a crowded coach. 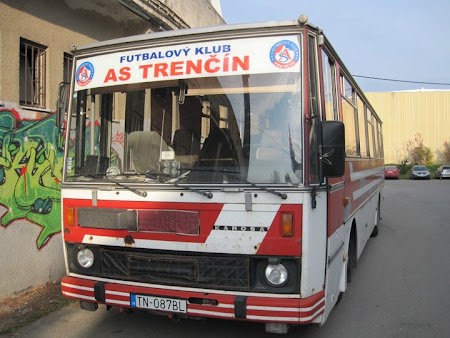 Talking of coaches. How about this for a bit of the old l-u-x-u-r-y. 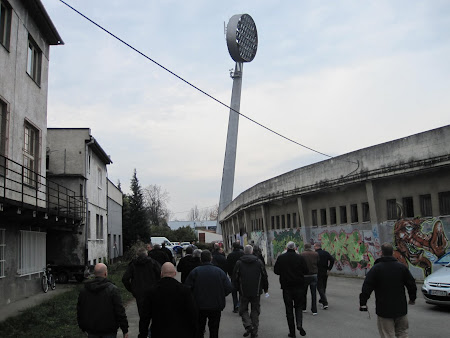 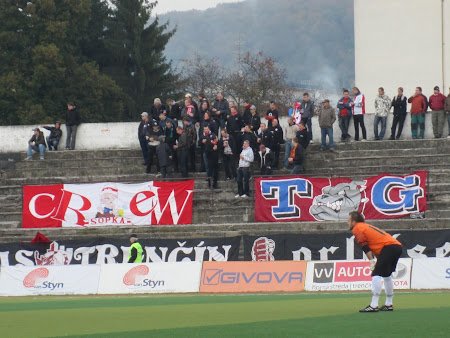 The local ultras. Soon to be our best mates.
Maria's coach company is a family run business called Mi Ti Busz Travel Utazási Iroda, and according to an announcement on the on-board microphone - as well as ferrying fans of Slovak Division Two football around Europe - are a firm that can organise wife tasting tours. She might have meant wine tasting, but either or sounded good the to now hysterical members of the EFW team.
I'd rung ahead to the football club to let them know of our tardiness. The idea of a delayed kick-off was mooted, but then kicked into touch. Instead, how about a special package? We were Zoë Ball (all ears). For €10 we could have a match ticket, an AS Trenčín scarf and a pint of beer upon our arrival. This was all the work of Martin Galajda, PR Manager of the club and proprietor to some mighty fine ideas.
So we gathered around a little hut carved into one of the stands, collected our AS Trenčín goodie bag and headed out into the stadium. Wow. It's set majestically underneath Trenčín Castle of which - if I'm not mistaken - the oldest building is a stone rotunda, plausibly founded in the Great Moravian period. The floodlights were absolutely beautiful. They're best described as beefier Euro cousins of the ones at Trent Bridge, Nottingham. Identikit Stadium with matching seats? Nope. Crumbling terracing with moss and plants growing freely? Yes. I loved it.
Across from us and standing on the terracing were a small knot of AS Trenčín ultras. I'd heard they were largely peaceful and furthermore held non-racists and anti-Nazi views which isn't always the case with Slovak ultras by all accounts. I went over to join them. This could have gone one of two ways, but luckily my peace offering of a few pints of local beer - at €0.90 a pop - went down a treat. Friends for life just how we like it. 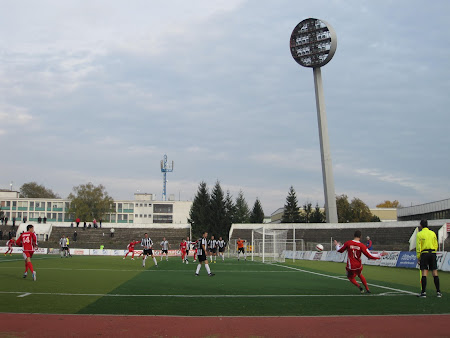 A bit of mighty lighty. 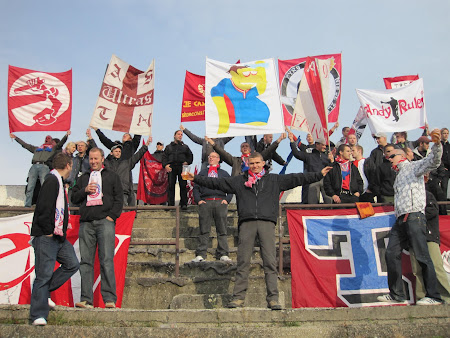 We're by far the greatest team.... 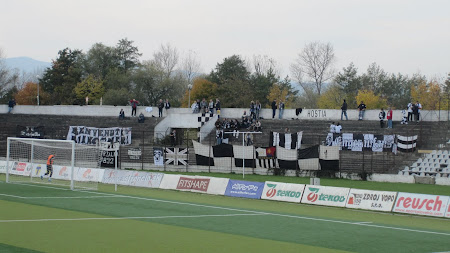 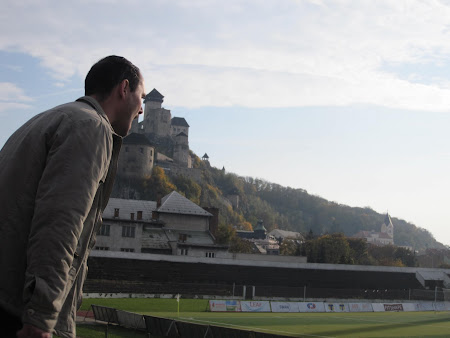 This chap was a complete loon and we loved him.
Amusingly, I wasn't allowed to carry the beers around to the other side of the stadium in a beer carrier because of safety fears. As such, the bartender caddied them around for us. Slightly bemusing due to the fact the terrace is covered in more stones than Brighton beach.
With so much bonding and back slapping occurring it was a job to watch what little of the game remained. Thankfully the home side ran out 2-1 winners maintaining their grip on the Second Division title and everyone was happy. Happy that is aside from the 50 or so away fans. Want to know more about MFK Petrzalka? Then head to our good friends over at Britski Belasi and these fine articles penned by James Baxter and Ian Cusack.
I'm not sure Slovakia has a Heat Magazine equivalent, but we'll be dropping them a line after spotting a celebrity in the crowd. It was only Leo Beenhakker. Evidently, Hakkers is a friend of the owner of the club and was there to lend a bit of moral support. Later in the week, the official club website reported not only on Mr Beenhakker's appearance, but that of EFW as well. These are the circles we move in these days.
The win sent AS Trenčín eleven points clear at the top of the 1. Liga meaning a return to the glory days can't be too far away for a club that we've taken to our hearts. So if you're ever knocking around Western Slovakia and you fancy seeing a welcoming club in some old skool and scenic surroundings then you know where to head first. 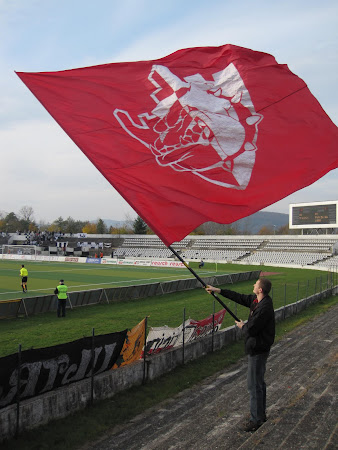 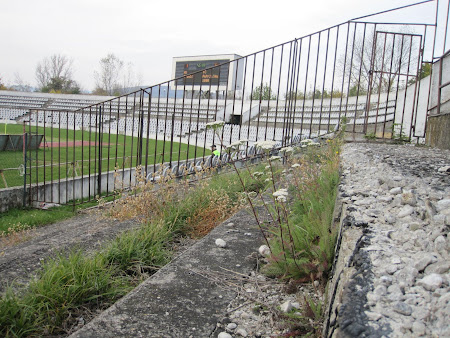 The rolling stones gather no moss. 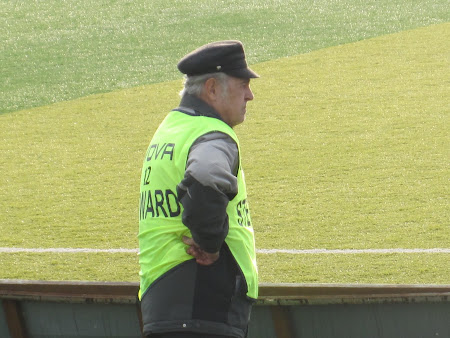 We had hoped to get on the pitch. No chance obviously. 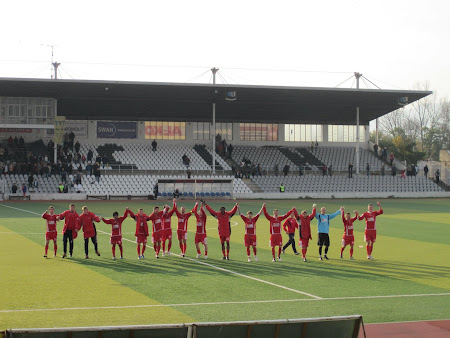 Na zdravie!
*Nice to meet you....
For lots more photos of that night and the rest of the trip CLICK ME.
For an excellent video put together by The Ball is Round blog CLICK ME.
Follow European Football Weekends and The Ball is Round on Twitter.
- Feel free to comment or ask any questions below -
Posted by Danny Last at 12:14

Oh, why can't we do this for a living!? Actually, I'm bored with my current job.
I'm thinking about relocating and sending my application to Miti Busz as we speak...

....which would no doubt be welcomed with open arms Stoffers. You are a natural talent on the microphone old chap.

I have followed Trecin since Mr Ling took over. Hopefully see them get promoted this year

...can I add the poor performance in my 'A' levels to the things Cresswell and Evans should be held to account for? Reading about which bus I'd have to get to Panionios was far more interesting than looking at supply and demand graphs !

Fantastic reads as ever EFWers

The more I think about this, the better it gets ..

€10 for a scarf (a good quality scarf at that - I know, I own one (http://britskibelasi.footballunited.com/about/) ..

.. a match ticket and a pint .. that's amazingly good skills from the Trencin PR guy (who was probably rubbing his hands at the prospect of an extra €290 for the club) .. fantastic post, fantastic publicity and I can't wait to visit this place.

The fact is good to read that,articles penned by James Baxter and Ian Cusack, and also the pictures are great to see.

AS Trencin <-- that's what i was looking for

There are millions of blogs currently on the world wide web but this is the top one due to the useful information you are sharing with the readers. Thank you

This is my Good luck that I found your post which is according to my search and topic, I think you are a great blogger, thanks for helping me outta my problem..
Dissertation Writing Service

This is a really good read for me, Must admit that you are one of the best bloggers I ever saw.
regards
Dissertation

Very informative i really like as essay writing services UK.

That is cool! Pretty impressive post. This is just one of a kind. Keep posting for more. best dissertation writing service uk

Thanks for taking the time to discuss this, I feel strongly about it and love learning more on this topic. If possible, as you gain expertise, would you mind updating your blog with more information? It is extremely helpful for me. Cell Phone Lookup | Trace a Mobile Phone Number | Identify a Cell Phone Call | Identify Sprint Cell Phone User |