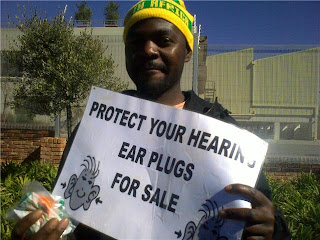 A Winter Wonderland
Brazil 2-1 North Korea (15:06:10)
Spain 0-1 Switzerland (16:06:10)
Charlton Athletic fan Stuart Mair is at the World Cup with Fatboy Slim and friends. The squad stayed in Johannesburg to watch Brazil before flying to Durban for Spain v Switzerland and then onto Cape Town to cheer on England tonight. EFW wishes they were out there with them *sobs into desk* :
Ok, so where we? Last time out I had found football nirvana and pleasingly we have continued in that mystical and spiritual way. Tuesday saw the squad attending the Brazil v North Korea game at Ellis Park Stadium. It's described in our - by now rather tattered and torn - Guardian World Cup Guide as 'A key rugby stadium and venue of the 1995 World Cup final. Has San Siro elements but with muffin-top curves'. 5000 miles to see some muffin-top curves - tick.
In my last letter from RSA I was bemoaning the absence of the North Korean Vuvuzela and suggested that was because there were no North Korean support. I was wrong. North Korea do have a following here, 40 of them to be precise and precision is easy when you are just sitting behind the Korean Kop. I have never seen such furious and staged flag waving. The Chollima gave a fine account of themselves to the delight of the millions watching back home, oh.
The Brazil game was great and it so reminded me of home. There was something akin to an afternoon at The Valley. Was it the free flowing football? Was it balls. It was the fact that it was minus two degrees with a biting wind in our face. A multi layering of clothes was essential not to mention gloves, hats indeed anything I could lay my hands on - it was freezing. 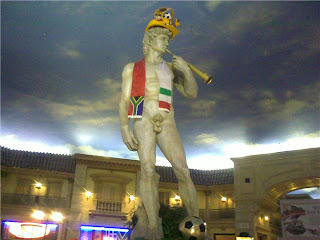 The locals clearly weren't feeling the cold as much.
Obviously the thing to do after a chilly evening watching the beautiful game would be to go home and have a warming mug of broth and retire to bed. What we did do was attend the Winter Wonderland gig with Norman playing to a very boisterous crowd until 2 in the morning.
Waking early on Wednesday we flew to Durban to attend the Spain v Switzerland Match which was top draw. The Stadium is breathtaking and if I can resolve my technical problems, I will send some photos. (EFW has a Durban contact, see photos below - Photo Ed.) This Match also represented the first game that Slepp Blatter, Pele and I have attended together albeit in entirely different parts of the Stadium.
Ex-Scotland gaffer Andy Roxborough seemed slightly puzzled by me later in the Hotel, he was somewhat confused by my Scottish shirt despite coming from Sussex. After the Game we watched Bafana Bafana play poorly and lose against Uruguay, that's probably it now for them now although I sincerely hope I am wrong.
Durban is a lot warmer than the Jo'burg experience and we were sweltering in almost, er, 18c. However the trip was to take on a new height of surrealism, after Winter Wonderland, the next venue and gig was to be held at the Kingsmead Test Cricket Ground In Durban. It had been taken over by thousands of Australians - for the entire World Cup! They stay in Army tents with the pitch roped off but really live in the cleverly erected 'Mark Bosnich Big Beer Tent'. I even managed to find one Crystal Palace supporter who proudly told me that the had moved from Croydon in South London to Croydon in Melbourne 22 years ago.
The gig was, as one might imagine, and I am going to use a technical term here "a bit messy" there would have been some sore heads the next day believe me.
We have just landed in Cape Town and it really is as wonderful as they say with Table Top Mountain looming over us. We are here to play to some more Australians and tonight we attend England v Algeria which we are all so looking forward to before a rather large gig for all the English support after the game....lets hope they are in good humour after a fine performance from England. Although we've had our favourites, the previous three games have been stress free. Now it's England and there is a knot of tension in our collective stomachs.
Come on England. To be continued.....
A friend of EFW (Gary Lacroix) was out in Durban prior to the World Cup assessing the stadiums for the Australian TV coverage. He sent over the following photos of the Moses Mabhida Stadium with its Wembley-style design and superfluous arch which is meant to be a metaphor for South Africa's new unity: 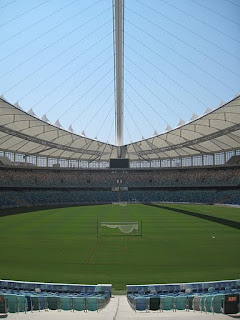 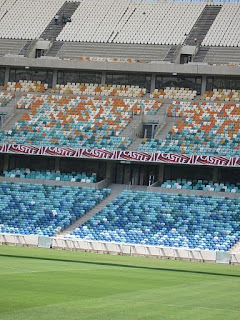 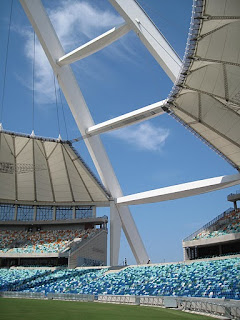 What do you think of the World Cup so far?
- feel free to comment below -
Posted by Danny Last at 09:42