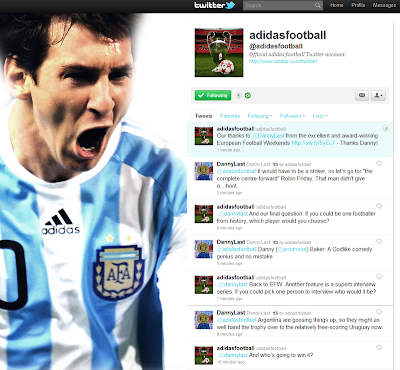 Adidas meets EFW
I did a "twinterview" with Adidas today on Twitter which I thought I'd relay to you on these pages, because frankly it's not an everyday occurring for me and, furthermore, I quite enjoyed it.

I should make clear at this juncture that I never wanted the EFW Twitter feed to be called @DannyLast, I wanted @EuropeanFootballWeekends, obviously. But that was deemed too long by the Twitter police, and hence I ended up looking and sounding like John Madejski - not the best look eh?

Anyway, this is what happened when Adidas met EFW:

@adidasfootball Let's get started. Sell us the European Football Weekends concept in a tweet.

EFW: Tales of travels that celebrate the underbelly of life whilst raising a glass to the wonderful world of football.

@adidasfootball What's been your favourite of those tales of travel so far? Any recommendations?

EFW: Istanbul. A trip out to see Fenerbahçe before popping across the Bosphorus on a ferry to Beşiktaş is absolute perfection.

@adidasfootball And your most unusual European Football Weekends experience?

EFW: After that Fenerbahçe match, Colin Kazim-Richards gave me his shirt. Up there with my wedding day in terms of cheesy grins.

@adidasfootball The new season is approaching - what should we be expecting from EFW in the coming weeks and months?

EFW: Lens at the Stade Félix Bollaert, then Belgium for KAA Gent v Standard, and hopefully a game in Luxembourg in between.

@adidasfootball If you had to choose the EFW to end all EFWs, where would you go and why?

EFW: Can I cheat and say the Superclásico between Boca Juniors and River Plate? In football terms, that's my lifetime ambition.

EFW: Sergio Aguero's sweet volley? No, it was the small dog who trotted onto the pitch during the Brazil v Venezuela game. Woof.

@adidasfootball And who's going to win it?

EFW: Argentina are goosing things up, so they might as well hand the trophy over to the relatively free-scoring Uruguay now.

@adidasfootball Back to EFW. Another feature is a superb interview series. If you could pick one person to interview who would it be?

@adidasfootball And our final question. If you could be one footballer from history, which player would you choose?

EFW: It would have to be a striker, so let's go for "the complete centre-forward" Robin Friday. That man didn't give a....hoot.

@adidasfootball Our thanks to @DannyLast from the excellent and award-winning European Football Weekends - Thanks Danny!

You can follow both European Football Weekends and Adidas Football on Twitter
Discuss this and more on the new EFW forum.
Posted by Danny Last at 13:41