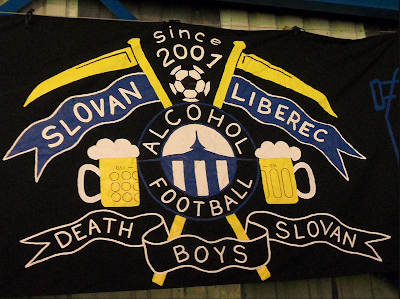 Libe, Libe, Liberec
Slovan Liberec 3-2 FC Banik Ostrava (21:10:11)
Angel of the North Andy Hudson picks up the baton to guide us through Day 2 of the EFW Oktoberfest......

This was the EFW Oktoberfest Spice Girls day when Two Become One and featured a tremendous amount of terrible singing. As one group were waking up before 7am in Bratislava and trying to find breakfast near the train station, the other half of the team were still in a deep slumber in Prague after a late night out. It would take until mid-afternoon when we’d all be in a bar on a boat before tales were swapped and we’d be drowning in beers.

Before that, the Slovak travelling boys endured: a four plus hour train journey; four people snuggling into the shoulder of their seating partner as they fell asleep; beers and knedliky; and the longest check-in known to man (or at least to Danny Last, Stuart Fuller and Big Deaksy) before pints of pivo were able to be ordered and we boarded the Liberec Boogie Bus.

The last known use for the bus was when Nick Berry had disappeared with Aidensfield’s local service and the replacement was drafted in from Prague. Years later and 39 football fans, from six different countries, were all stuck in rush hour traffic on said replacement with 31 of them desperately needing the toilet after the beers. As soon as we’d broken through the Prague city limits, we were queuing at service station for a quick toilet break and for ‘refreshments’. Then it was onwards to Liberec.

After a detour through the town on the way to Stadion U Nisy, we were off at the ground. The good guys of Liberec had helpfully stuffed an envelope full of tickets for us to collect at a window and then it was pivo time. The pub at the stadium, usually pretty empty, celebrated Christmas and their birthday that evening as the doors were flung open with the cry of “devětatřicet pivo”. One of the EFW Okoberfesters proclaimed that he was having a far better time than if he had remained in Prague. His story was that he had never heard of the trip and was on the flight over to join a stag weekend. Now when the magic words “You should come on a European Football Weekend instead” were uttered to him, he promptly signed up and instead of strippers and beers in the capital, he was up near the German and Polish border supping pre-match ales.

As we descended on the stadium (and the club shop) just before kick-off, there was the joy of looking across from our stand at the stand opposite: built coming out of rock – tick. And more....a line of cheerleaders dancing in the stand – oh yes..... and we wanted more. Cheerleaders dancing down the aisle next to the Ultras, who were already in fine voice – yes, yes, yes! Liberec: I was in love. 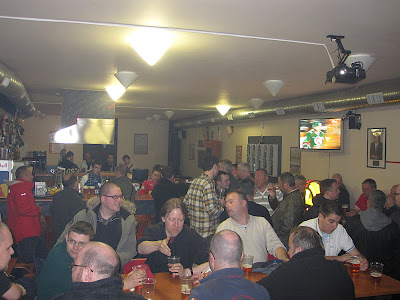 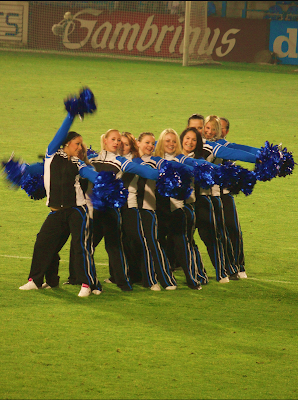 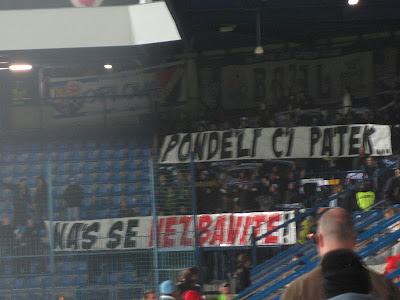 Liberec went in at half-time with a 2-1 lead after taking the lead through a Vojtěch Hadaščok header. Václav Svěrkoš replied for the visitors with a great strike from the edge of the box before Jan Nezmar scored with a back post header that just dropped beyond the line before being cleared.

Impressed with the ‘Slovan Death Boys’ and their singing during the first half, including the brilliant Libe, Libe, Liberec chant, there was only one thing to do: we had to join them for the second half. But the question was: how? We pondered for a moment and then our Liberec host returned with beers, disappeared for a moment before reappearing on the other side of the fence and producing the keys to a magic gate that allowed us entry. From that point the beers flowed and the songs ran from our throats. In a short interview with one of the Ultra’ leaders, he explained that “Liberec are apolitical as politics causes many problems at football, and so we stand with neither the right nor the left; we only stand with football”. 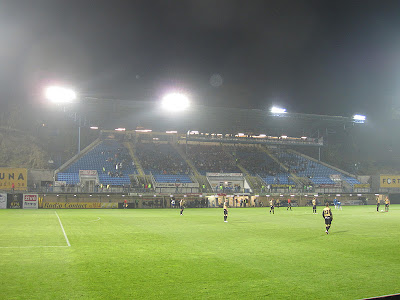 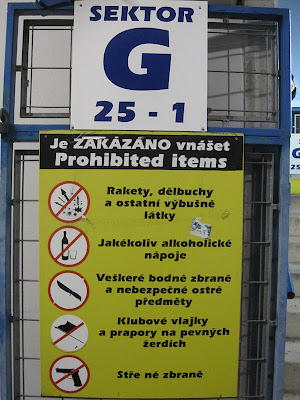 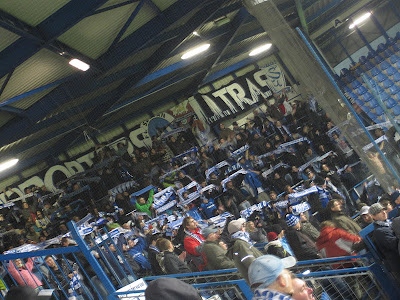 That's me in the corner...
Midway through the second half, Banik equalised when Svěrkoš lobbed the Slovan ‘keeper. The home fans kept singing and then in injury time came the moment that left a number of the Oktoberfest contingent on the floor while celebrating: Nezmar reacted first to a defensive header that went backwards and he poked the winner in for Liberec from six yards out. I ended up in a six-man hug that sent all of us falling backwards and beers spilling all over while other fans and EFWers celebrated together.

As the Ultras continued their celebrations, we politely declined joining them in their bar as we had a journey back to Prague to complete on the Aidensfield special. After a quick pint in the pre-match bar while we waited for everyone to arrive, we then boarded and set off for our weekend home. The singing on the bus was loud; the Spice Girls could never, ever, hold a candle to us. We had a whip-round for the driver and then set off for the first pub in Prague that had spare tables. There might have been more pivo involved at this stage; I suspect that there was, yet my memory fails me. It was late, so late, and as Libe, Libe, Liberec played in my head, I drifted off to sleep....there was a football match starting in six hours. 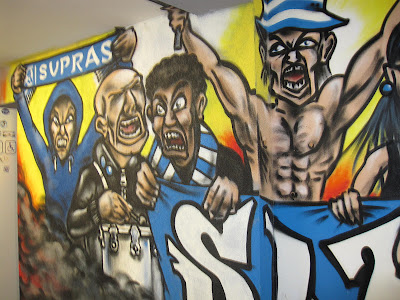 There are two photo montages of the whole of the EFW Oktoberfest, set to music, both here and there.
Follow Andy Hudson and European Football Weekends on Twitter.
More of Hudson's fine work is available at Gannin' Away and Blagul Fotboll
Tomorrow on EFW: AC Sparta Praha B v FC Brno
Posted by Danny Last at 10:59