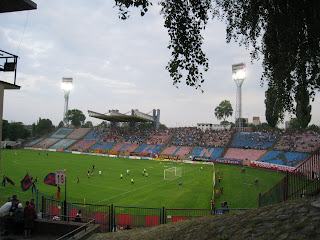 - click on photos to enlarge image -
After watching games at Hansa Rostock and VfL Wolfsburg the previous two days, this Sunday was initially set aside for a regional match in Berlin. We hadn't factored in EFW member Michael Stoffl though had we? Michael - an 1860 Munich fan from Germany - now lives in Berlin and had contacted us through the EFW website. He advised us that we could in fact attend a match in Poland if we so wished (yes please - Ed).

I'd never been to a match in Poland. Would it be a throwback to the 80's with film crews following the excitable duo Ross Kemp and Danny Dyer who'd doubtless be reporting on snooker loopy fans engaging in gang warfare on the terraces!? Or with Poland set to co-host Euro 2012, would a cash injection of złotys from the Polish FA mean that everything was now tickety-boo and sponsored by Maccy D's, Heineken, Amstel and that tyre company?

Pogoń Szczecin and Polonia Słubice are fairly tricky names for an English simpleton to come to terms with. It's at times like these that I think to myself; what would my heroes Johnathan Agnew (Aggers) and Henry Blofeld (Blowers) do!? So with them firmly in mind - and if it's ok with you - I'll simply refer to them as Poggers and Slubbers from now on in. Deal or no deal!?

Some cometh Sunday morning and matchday the EFW were - it has to be said - in pretty bad shape after two late nights on the beer in Berlin. Think of the worst hangover you've ever had and times it by two and that's how some of the team felt. So upon meeting the aforementioned Michael for the first time - on platform 6 at Berlin Hauptbahnhof (station) - his kind offer of a 5.5% Berliner Kindl beer as an opening gift to us was met with a somewhat muted response.

As everybody knows though, the only way through a hangover is to stop feeling sorry for yourself and to bat on gamely. So after a two hour train journey we made our way to the Christopher Colvmbvs pub - in the City of Szczecin - overlooking the Oder River and out to the Baltic Sea. It was the sort of place you'd receive 1 x big tick and 3 x brownie points for taking the wife to lunch. Moreover, it sold 5.7% beers at £1 a pint which were pleasingly called 'Bosmans'. The phrase 'back of the net' sprung to mind.

After a look around the town for an intake of culture (Big Deaks insisted) we hopped on the tram up to the Stadion Florian Kryger. It was still a couple of hours before kick off so we were still very much in need of some pre-match entertainment (beers). We met up with a small group of fans who told us that no beer is served in or around Polish football grounds because "it would be total and utter chaos". Fairly do's. So we brought our match tickets (£2 each! - or £3 if you wanted a roof) and headed back into town. 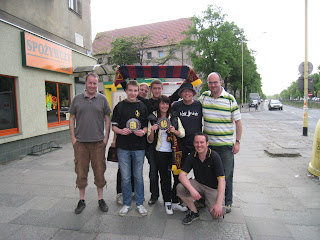 The EFW team with a few new mates from Poggers. 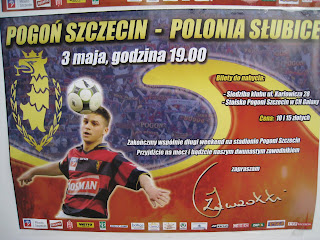 The nearest pub to the ground - that was open - was an underground cavern that initially we thought we may get murdered in but happily turned out to be pretty pretty good. Zywiec beers were the order of the day in here and again they returned at around £1 a pop. Nice. Outside the pub, trams were taking fans to the ground. Any tram containing fans was flanked by police vans complete with flashing blue lights. If you put Poggers into You Tube you get all sorts exciting images so we didn't really know what to expect.

As it was, as soon as we made our way through the turnstiles a few minutes before kick off, it was clear that the fans had disappointingly chosen to stayaway. Two seasons ago Poggers were playing in the Polish Ekstraklasa (Premiership to you and I). They finished bottom and were relegated a further two divisions due to the old 'financial problems'. They won the superbly named 'Zachodniopomorska' league last season and now find themselves in the top two of the Zachodnia group of the new II Liga (formerly the Third League) about the gain promotion back to the Polish Second League (II Liga Polska). Are you following at the back!?

For the first half we sat just above the Pogon ultras. Their songs were a joy to behold. My pigeon Polish translated them as thus: 'Mash Mash Mash' sung for the first 20 minutes, followed by 'Four goals sexy scum', 'Coca Coca are we' and pleasingly 'We hate Palace'. The ultras were lead by two lads in a readily made platform, one of whom some rather unkindly referred to as 'Fatty'.

The rather large stadium - in the shape of a horseshoe - smelt of drugs. I'm not altogether sure if it's legal to smoke pot in Polish grounds but everybody was doing so and by the look of the lads around us, we weren't going to argue with any of them. Sadly, no Slubbers fans made the small journey north to the match. They are bottom of the league and were quite possibly the worst footballing team I'd ever seen.

Early on in the match, Poggers had a player sent off for two innocuous challenges. This spoilt the game as a spectacle and I had a good mind to ask for my £2 back. Things picked up at half time when chaps on stilts ran across the pitch firing signed shirts into the crowd from toy machine guns. This prompted a minor pitch invasion as some of the shirts didn't make it into the stands and were left on the pitch. Scrambles.

With 15 minutes of the game remaining we had a big decision to make. Leave the game early doors, purchase some Bosmans and make the last train back to Berlin in time. Alternatively, we could have stayed on until the bitter end, miss our last train back to Germany and stay the night in Poland. Both appealed but in the end we decided that as no goal was going to be scored in three months of Sundays we'd opt for the Bosman ruling. 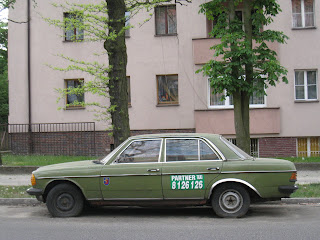 Option three was to get a taxi. This was the only one at the rank though, complete with four flat tyres.
A bit of a stinker then ensued. As soon as we put one shoe outside the ground an enormous cheer went up. 1-0 Poggers. Worse was to follow. We later heard that Slubbers had equalised - Lord only knows how. So we missed both goals and that stinks. We did however thoroughly enjoy 16 cans of Bosmans on the way back to Berlin. By now Michael was very much on our wave length and cracking funnies. Big Deaks in turn - spurred on by the power of Bosman - was giving Michael stick (Michael Stich!?). Happy days indeed.

Upon our arrival back in Berlin everybody aside from Big Deaks and I decided to call it a day. The two of us then went of a bit of a pub crawl celebrating with lots of Panathinaikos basketball fans long into the night, as you do. We'll be back Poland, hopefully with a lot more fans next time. Na Zdrowie. Vivat! 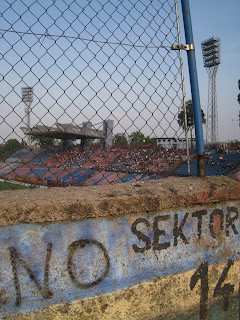 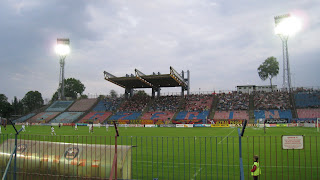 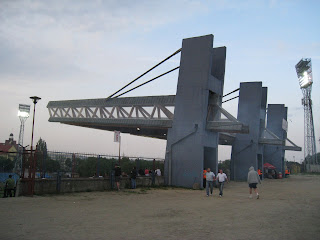 How the other half live - an extra £1 to sit under this beauty. 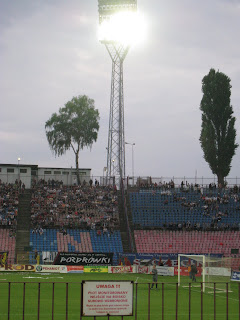 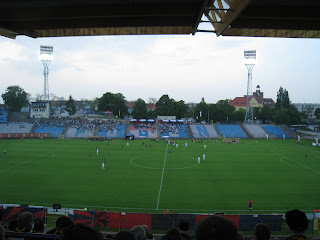 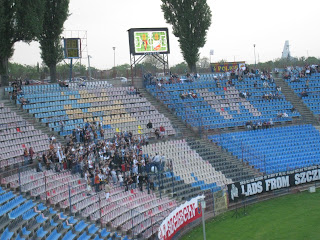 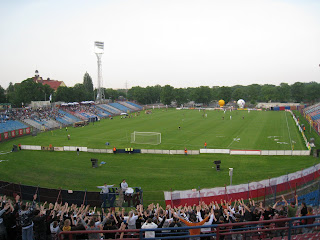 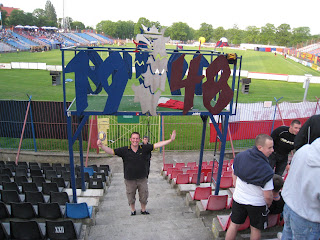 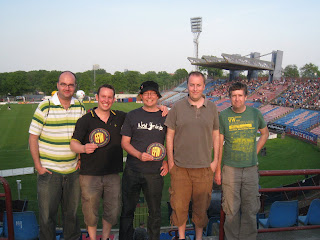 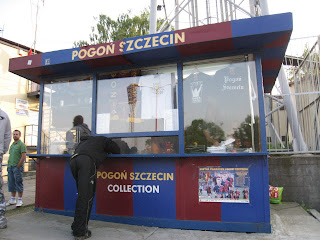 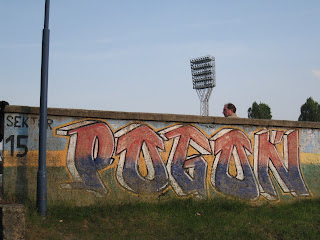 Polish Extra! Eagle eyed fans amongst may have noticed a 'Legia Warsaw' flag in the ground. You can see it clearly here: 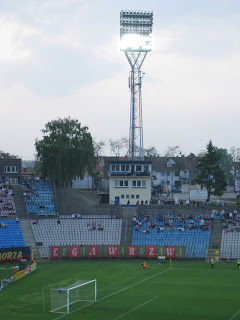 What's that flag doing there you may ask!? Well, it's because fans from Warsaw are like brothers for Pogon, they have a friendship with Legia. In Poland, for matches against Legia - Pogon call it 'Friends Debri' - and it's always great atmosphere. One for the EFW notebook I reckon.

Also, it's been brought to our attention that Poland's match with Northern Ireland will take place in this very stadium in September. Check this video out if you want to see what a Polish International looks like in the Stadion Florian Kryger. Most impressive I'm sure you'll agree.

You are fucking english daisy. What can you know about ultras if you sit and read a newspaper during a football match?

Hi, i'm Kajetan from Szczecin, Pogoń's Fan. You've been on the worst game ever in Szczecin ... When we're been in first league the Pogoń's game was fantastic spectacle but today ... this is shit. You must come to real good match and then you will see more than you expect. In 5th September in Szczecin Poland will play with Northern Ireland and that will be like this http://www.youtube.com/watch?v=SCoGOX9GGmw&feature=related . After Pogoń's and Polonia's match you have wrong view about Polish Fans. I've be waiting for you in September !

Greating from Poland and sorry for my bad english ;)

You are correct mate! Some 'English daisies' come to countries like Poland to see some real fans! We love the atmosphere abroad and that's partly why we travel.

Kajetan - thanks for your comments. We appreciate that it wasn't the best Pogon match to see and we've seen what it can look like on a good day. We'll be back my friend to see it in its full glory. Respect!

WOW what a trip glad u had such a drunkingly good time just one more thing TAKE MEEE WITH YOUUUUUU haha seriously you made me wanna get onto a few european football weekends myself!! 1st place im gonna go The Faroe Islands for something diffrent lol

hi,i'm Marek from Szczecin,i agree with my Pogoń s fan Kajetan...now is shit,look this..will be like this when we come back in first league (next 2 years):

and please remember Danny...Pogon fans have big respect in Poland..
Thanks,sorry for my bad english.

I think in two years time when Pogon are back in the Ekstraklasa, we'll pop over for the 'Friends Debri' with Legia Warsaw! That looks like something else!

Good to see your reports are being followed in Poland, too. I'll surely be back and hope Pogon will rise to glory again soon.

An adequate summary of that day's events, with a strong focus on the Bosman ruling and a few too many poor puns ("giving Michael stick").

I missed the Pogon game when I was there (actually, not sure if they were at home or away that weekend) but I spent a week in Pogon. Not your usual holiday location but well, that was the reason why I went: I wanted to be away from it all in a not too touristic place. I quite liked it. Every district was something else. Near the train station some flats were that old that there was no glass in the windows, while a bit further there was some bright architecture and big mansions. Only a stonethrow away from that ghetto ... Odd in a nice way. Once after dark the city looked desolate and I was the only one in the streets. I hope to visit the ground if I'd ever be back there again, though preferably for a friendly without too much people. I'm not too fond of big crowds :)