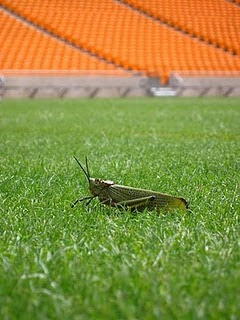 The Greatest Show on Earth
How about getting three of the most respected football journalists and Barry Glendenning to wax lyrical about the World Cup then our kid? Not a problem old chap. In recent weeks EFW has been fortunate to have had enough blag about us to coax big name journalists into our sorry web. So in a neatly put together highlights package (just hum a bit of Stone Roses whilst you're reading), here are all four big name - we're only joking Baz you're the best - interviews in which the lads have their say about the hype and the hoopla of The Greatest Show on Earth:
On England chances
Barry Glendenning - I honestly don't think England have a snowball's chance in hell of winning the World Cup, which is an option that doesn't go down well with some of my English friends. But they've had Ireland under the heel of oppression for over 800 years now, so I don't care what they think. They might have forgotten what Cromwell did, but I haven't.
Sid Lowe - I have a feeling that England might go one step further than normal this time. So, quarters or semis, then. We might actually beat one genuinely good team. I find it hard to avoid the feeling that with England success or failure depends on the teams that await once it gets to knock out rounds, rather than how well we really play.
Paul Hayward - England are football's eternal quarter-finalists. In the 12 World Cups they've contested, they've gone out at that stage six times. But Capello is special. he could make the difference in those tight knock-out games. But I still don't think England play possession football as well as the superpowers - that's our undoing against the really big teams. I'd say semi-finals this time.
If England fail to win the World Cup, it'll be the media's fault for bigging them up
GM - The media always big up England. It depends how England go out. The fact of the matter is that luck and happenstance play big roles. You don't necessarily need to be lucky, you need not to be unlucky.

BG - I don't care whose fault it is (although a small part of me hopes it's John Terry's fault), so long as they come home empty-handed. England's a great country which has been very good to me, but the jingoistic smugness that would accompany a World Cup win would be unbearable for me as an envious Paddy. Myself and a couple of Irish mates have already decided that if England make it to the final, we're going to spend the 90 minutes of the game doing laps of the London Underground's Circle Line. Then once we reckon the match is over, we'll alight from the Tube and emerge blinking into the sunlight to see what the prevailing mood on the street is.
Who is going to win?
PH - Spain, if they maintain their European Championship winning form. A wonderful team. But Brazil have developed a lethal counter-attacking style and are well-drilled by their manager Dunga.
Did someone say Spain? Get Sid back on the line. They'll win it won't they Sid?
SL - They should. But, hey, shit happens....one slip and they could be out. Del Bosque said something very important: Spain shouldn't let themselves get into a dangerous state where it's either win the tournament or be a failure. I think they are the best side in the world but who knows if they will actually win it. Torres and Villa will be vital.
Favourite World Cup memory
GM - I'll give you two involving Italy, just because they were so personal. Watching Italy v Brazil in 1982 in my Little suburb of Frankfurt and seeing Zoff make that late save, that was special. but also in the semi final against Germany at the Westfalen Stadium, when Lippi brought on the two strikers even as Germany was battering us. And then seeing Lehmann beaten and try to kick Gilardino. Wonderful. As for non-Italy related memories, obviously Maradonna's second goal against England, as well as that brilliant reverse pass with his right foot to set up Caniggia against Brazil in 1990. Rashidi Yekini collapsing into the back of the net and praying after scoring for Nigeria. There are plenty of others. (Note to self: arrange night on the beer with Gab to talk about World Cup memories - Ed.).
Any matches you're looking forward to?
PH - In the group stage, Brazil v Portugal is the highlight. Ronaldo v Kaka, anything involving Argentina and Maradonna will be interesting; he's a reporter's dream! Thierry Henry's first appearance for France could be lively. They'll be cheering him on in Dublin.
Does the World Cup still get our juices flowing?
GM - Absolutely. There is nothing like it. And if you've been fortunate enough to witness your team winning it - as I have been, twice in my lifetime - there is nothing like it.
You can read the lads interviews in full by clicking on their names here; Barry Glendenning, Sid Lowe, Paul Hayward & Gabriele Marcotti. If you think they were good then listen up real good when I tell you that next week we've got John Ashdown of The Guardian to talk to EFW. Scoop-age or what! Woop, crash, fireworks, confetti and hoopla etc
Follow EFW, Barry, Sid and Gabriele on Twitter.
The photo is of the grasshopper was taken a few weeks ago at Soccer City, Johannesburg by a pal of mine. Where else was I going to use it?
- Feel free to comment below -
Posted by Danny Last at 10:56

"If England fail to win the World Cup it wil be the medias fault for bigging them up."

Now let's get this into perspective. Surely to win the World Cup you don't necessarily have to be the best in the World but you do have to be up there.

England are nowhere near.