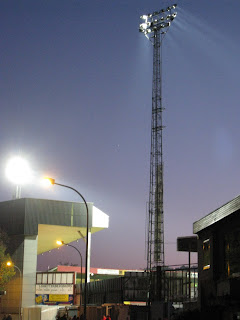 After the previous nights entertainment at Den Haag and a long night on the beer back in Antwerp, we awoke thirsty for some more action. Roland met us at the hotel and again took us to the Ten Eeckhove pub for a breakfast consisting mainly of Stella Artois. 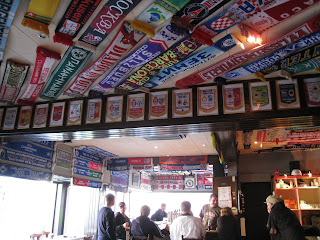 The joy that is the 'Ten Eeckhove' pub. And yes, it does have a Brighton scarf.

Those of a nervous disposition should move on a couple of paragraphs as I talk you through our afternoon prior to visiting KV Mechelen for our second match of the weekend. Firstly, Roland's brother Patrick met us in the pub and drove us to an amateur match. En route we stopped off at Stadion Jos Van Wellen home to FC Cappellen (as you do) to check out their modest stadium. They ply their trade in the Belgian 'Third Division B' and as such who wouldn't want to spend twenty minutes having a look around!?

After that we pulled into salubrious surroundings of Tol VV FC who were entertaining our friends from Ten Eeckhove. Tol VV had an incredibly beautiful club house which doubled up as a huge country manor mansion, owned by the Belgian government and serving up subsided beer. We divided our time between watching our new mates Ten Eeckers thrash the league leaders Tollers 8-1 and spending time at the bar in the house, a very big house in the country. 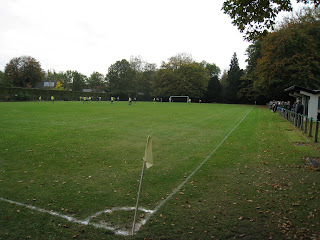 By Eeck - 8 bloody 1.
Following that match is was onto Antwerp Station to get our train to Mechelen, pausing only to take in the Het Ludo Loeckstadion of Koninklijk Bercham Sport. The third biggest team in Antwerp who play in the bizarrely named 'Promotion B' in the fourth tier of football in Belgium. Do girls do this sort of thing on their weekends away!? 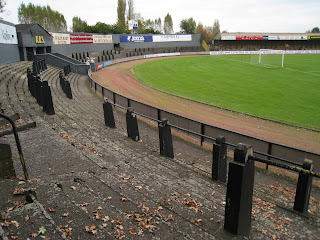 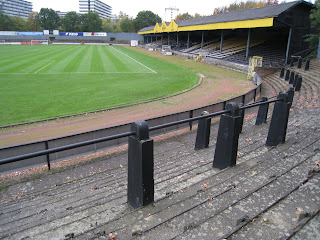 Another ground for the road lads!?
Finally, we were on our way to Mechelen. The train journey took all of about 15 minutes and it took a further 10 or so minutes to walk to the ground, or at least the pub outside the ground. We started off with a swifty in the Red and Yellow bar. I say swift because between you and I there was a smell of BO there which was most unpleasant. From the newly named BO bar we headed to another pub opposite the stadium. The landlord was conducting a tombola event to raise funds. Prizes included and I kid you not: A bottle of Ajax cleaning liquid and a battered old plastic colander.

It was a wrench to leave those pubs but conscious of time we made our way into the ground. It soon became clear why almost nobody had bothered with the pubs surrounding the stadium. It was all happening inside. The supporters club bar was a hub of activity. We made ourselves welcome and as we were drinking some more fine beers a marching band made their merry way past us carrying along with them supporters flags of all of the KV Mechelen fan groups. This was more like it. 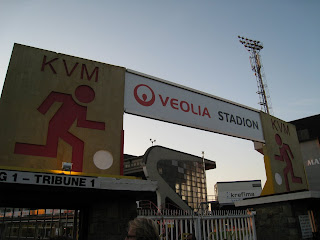 Whose got the colander!? 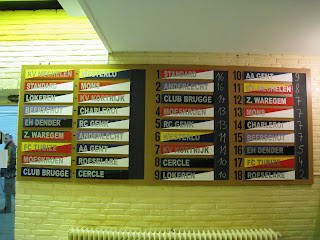 What's not to like!?
As we walked around, many more bars, tented or otherwise opened up in front of us. It was like a mini Glastonbury Festival behind the stands. Being Saturday night and full of beans we decided it would be rude not to join the masses and sink a few more bevingtons.

Making our way past the 'No Wild Pissing' signs we finally took up our position minutes before kick off. Inside, our terrace beer giggles were enhanced by some chanting hilarity's amongst the home faithful. With their team strip consisting of red & gold, they'd adopted Spandau Ballet's 'Gold' as their anthem.

The ground itself was like a better version of Brenford's Griffin Park. It was sold out and to be fair - on a scale of nought to Besiktas - I award the KV Mechelen fans three stars. 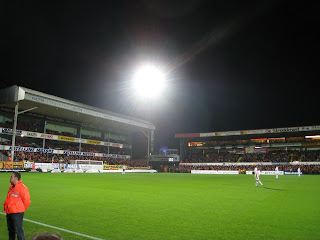 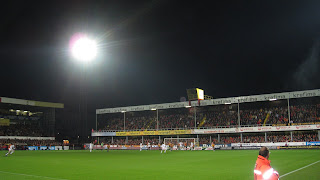 The home side had their very own version of Liverpool's Dirk Kuyt in striker Bjorn Vleminckx (no.18). He worked his socks off and wasn't quite good enough.

Twenty minutes into the match the referee correctly awarded a penalty and sent off KVM's goalkeeper for blatantly wrestling a Westerlo forward to the ground. Bad news for the home fans, good news for followers of chaos, action and goals.

Westerlo eased into a two goal lead before the referee finally showed some empathy for Vleminckx and awarded him the softest of penalties which he duly converted prompting further giggles all round in our camp.

As Mechers pushed forward, the crowd ceased throwing plastic beer pots at the officials and bellowed out a fine rendition of Gold. So there we were, arms aloft in the classic 'five to two' position, singing it with feeling: 'GOLD, always believe in your soul, you've got the power to know, you're indestructabllllle, always believe iiiiiiin because you are GOLD'. A classic EFW moment. 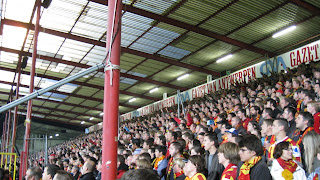 Did it work!? Did it 'eck as like. Up went Westerlo and popped in a third at their leisure. However. with a full house, splendid atmosphere, goals, mirth and hilarity, a red card and a sending off it really had been a most enjoyable way to spend 90 minutes. 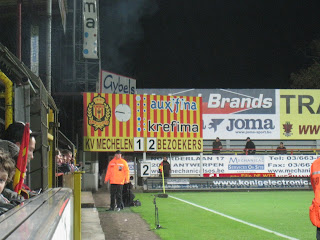 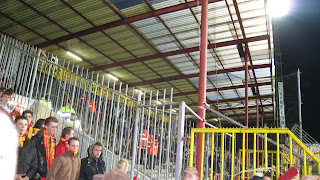 The aforementioned 'Bezoekers' - they are in there somewhere, about 600 of them, honest. 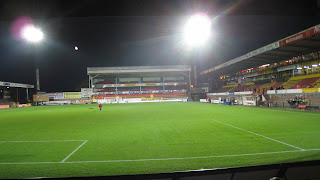 It's all over, anyone fancy another beer!?

After a ale outside Mechelen Station, Roland led us back to an underground cavern back in Antwerp complete with indie tunes. One beer soon became enough to sink a small battleship and before you could say 'my clothes stink of smoke' it was 5am and were rolling back the years, swinging a fast shoe to the Ramones. Happy days.

nice weekend you had there.

just pointing out, out of Anderlecht pride and respect for the deceased hero: it's the Ludo Coeck stadium, not Ludo Loeck.