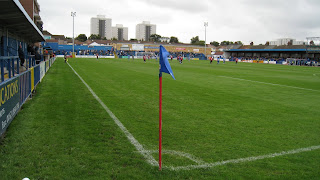 Obviously we are predominantly all about European Football Weekends here on this site. Now and again however, when the mood takes me, I'm going to allow reports of the 'occasional domestic day out' to slip in under the radar. Please file any complaints regarding this policy to the usual address.

Prior this fixture both Grays and Lewes had experienced high levels of turmoil within their respective camps. Grays Chairman Mick Woodward had a brief stint as manager, decided he'd had enough and wanted to sell the club, then changed his mind as long as a Supporters Trust was set up, then Tim O'shea became manager, they win a game shock, then he goes and in steps Wayne Burnett to become the boss.

Mind you, Lewes finished Champions of the Conference South last season, sacked their manager, all the players left, the fans were upset, Internet rumours were denied that the club had applied for demotion to into the Ryman League, you know the usual gubbins. Who wouldn't want to attend a match between these two!? Anything could happen. Welcome to the world of the Blue Square Conference.

Now then, during any given non league game of football, one might expect to see a large number of anoraks. Cynical Dave and I who were to attend this match having travelled up from Brighton, were to experience one earlier than expected, on the train journey up no less. Our train guard - itching for a conversation - sat himself down next to the pair of us and made us guess prices of train tickets, told us the most expensive ticket he could issue was an £880 1st class two week rover special and as a parting shot told me that he could in fact sell a ticket to any European destination. Bizarre start to the day - tick.

As a place, it would be fair to say Grays doesn't register highly as a holiday destination. It's situated 20 miles East of London on the North Bank of the River Thames. I hadn't been before but I'd made enquiries and had been fed a negative response. The word 'dump' featured quite heavily. For the record, I thought it was alright.

As we exited Grays Station, we skipped past the now-disused State Cinema which was once used as a location in the film Who Framed Roger Rabbit? (What was that about anoraks!? - Ed), Cynical Dave got his betting fix in Corals and we resisted the urge to both buy a watch on the Saturday market "I don't wanna see a tenner - five pound to you Guv" and have a pint in the Queens pub.

Instead we headed straight for Grays Athletic's own pub, the splendid 'Blues Bar' which comes highly recommended. First thing you notice upon entering is that from the inside, you are afforded a most fantastic view overlooking the ground. It would in fact have been an idyllic spot to watch the actual match had it not been for draconian, nitwit Football League rules that state that a polite beer cannot be sunk in view of a match at this level.

The second thing to mention in the Blues bar is that - providing he is still there - you won't miss club Chairman Mick Woodward. He is everything you'd expect and want from your Chairman. Woodward has ploughed a fortune into Grays, he is certainly a character and Cynical Dave and I enjoyed our brief chat with him as we sunk our respective pre-match bevingtons. If you want to speak with him, he'll be the one with the posh suit on, propping up one corner of the bar.

At this juncture, I have to thank Phil O'Reilly in the Grays ticket office who set aside a press pass for me for this match. If this is to become a regular feature, I'll have to procure myself a pork pie hat and strap on a pig's nose for these occasions.

One thing I would say to Mick Woodward - if he is reading this - is to please dip your hand in your pocket once more to find a matching set of tracksuits for the GAFC cheerleaders. They battled with the elements, bravely tried to put on a show but looked a bit sad in a mixture of borrowed gym kits and a lack of a uniform.

There is not too much point of getting misty eyed about the stadium at Grays either. Word on the street is that they are set to move shortly. It has two banks....well small hillocks of terracing at either end, a covered all seated arrangement that passes for a main stand and a covered terrace along the opposite side which is overlooked by some residential flats. Those lucky punters can if fact watch the match from the comfort of their own living room. 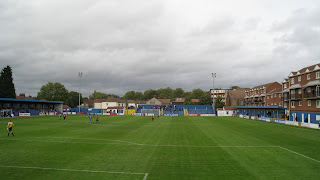 Flats overlook the ground to the right. Who wouldn't want one of those!?
I won't dwell on the match in great detail. I'll let my *cough* colleagues in the press do that. I will say that at this level I'd like Grays Jamie Stewart and Lewes's Danny Cullip in my defence any day of the week. Grays Sam Sloma, Jonny Dixon (x3) and The Rooks Scott Taylor, Sam Gargan and Anthony Barness all had shots denied by a combination of good goalkeeping, posts, crossbars and a case of very bad wind. It was blowing a Tony Gale. 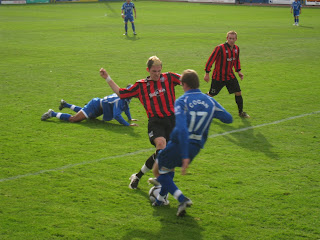 Grays Barry Cogan and Lewes defender Ollie Rowland get stuck in.
I suppose also worthy of note - given that it is fairly unusual - was the fact that the referee was a woman. Ms A E Rayner was guilty in the first ten minutes of issuing free kicks to anyone who appealed for one. After that though in fairness she had a very good game, faultless in truth. I award her a pass with distinction in the old Grays whistle test.

Fans of Premiership football might not be able to comprehend this but I don't actually go to footie just to watch the actual match. Football for me has always more of a social event, I believe the Irish call it the 'craic'. This policy allows me to enjoy 100% of games rather than the 7% of matches which - according the the Carling OPTA index (probably) - are actually any good. Hence, as usual I enjoyed my day out at Grays.

So what do the various assembled media hacks do after a rip-roaring Blue Square Conference encounter!? Well, we filed our reports, sent for a fleet of taxis to take us to the Groucho Bar to sink copious amounts of beer before three knocks on the back door saw us into the Chinawhite nightclub. It was either that or we got the train back home via a rail replacement bus service between Haywards Heath and Brighton to meet Big Deaks in the Lord Nelson - I forget which. 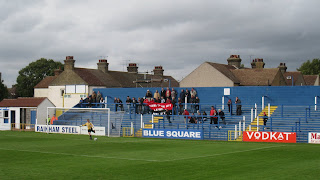 Fresh from a bout of excessive star jumps following their first win over Oxford the previous week. Lewes fans turned out in their tens. 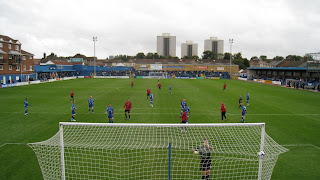 After 90 minutes the ball actually comes into contact with the net.
Posted by Danny Last at 10:26

Grays Athletic FC is one of those clubs who have reached the summit of non-League football - but actually still have one foot in the Ryman League (North). The ground lacks any charm and character of an old non-League club and consequently doesn't attract much support or enthusiasm from the locals. One thing I would say, however, the Melbourne Stadium home of Chelmsford City is even more naff!

Grays Athletic FC is one of those clubs who have reached the summit of non-League football - but actually still have one foot in the Ryman League (North). The ground lacks any charm and character of an old non-League club and consequently doesn't attract much support or enthusiasm from the locals. One thing I would say, however, the Melbourne Stadium home of Chelmsford City is even more naff!

I know exactly what you mean RE the social side of going to football matches.

I'm a Notts County Season ticket holder and I would definitely say that the majority of my enjoyment of games comes from meeting up with my mates and chatting about whats been going on and County's chances in the game rather than the football itself, although that can depend on the game in question.

I must say that I am impressed by this site, I will be checking back to see your latest adventures in the future :-)