Alcorcón, The Pride of Madrid (again) 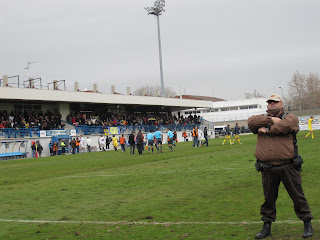 AD Alcorcón 2-1 Real Madrid Castilla (03:01:10)
- click on photos to enlarge image -
Someone in EFW's Brilliant Ideas Dept had decided it would be a top wheeze to take in a brace of matches on the outskirts of Madrid - in the same day. Needless to say I had no objections and considered myself up to the task in hand.

A trip to Alcorcón for a midday kick off with Real Madrid Castilla (reserves) would be followed by a short trip on the metro to Getafe to see them do battle with Valladolid at 5pm. I don't know about you but these are the sort of days I find fairly agreeable.

AD Alcorcón were involved in the second most astonishing thing ever to occur in this glorious old pastime. They were responsible for knocking Real Madrid out of the Copa del Rey this season. They thrashed them 4-0 at home and only lost 0-1 in the return leg at the Bernabau. 4-1 on aggregate and the biggest upset of all time in Spanish football complete. Some Real Madrid players haven't played since that game, notably Guti (who I cut up earlier in the week over in Castilla-La Mancha) - bad few weeks for him no!?

What? You want to know the most astonishing thing ever to occur in football? Here you go then; when Arbroath beat Bon Accord 36-0 in 1885 - thus recording the biggest victory in any senior British match - just 18 miles down the road on the same day, Dundee Harp beat Aberdeen Rovers 35-0. How's your luck!? Worst still, the ref thought Dundee had won 37-0 but their own secretary thought they'd only scored 35 and so the lower figure was agreed upon.

Where were we? Football, Spain, oh yes...Alcorcón. Well, the twenty minute walk from the metro station to the ground takes you past a multitude of high rise blocks of flats. You also walk through a large park which - at a push - you could call an area of outstanding beauty. Its not really a place you'd choose to bring your wife on a honeymoon but good luck to it anyway. I felt just as at home here than anywhere in the country. It's the real Spain so enjoy it. 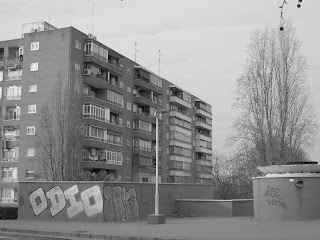 The real Spain? Welcome to Alcorcón... ....fancy seeing a match?
After being relieved of €15 for my match ticket, I made my way inside the 3,000 capacity mutli-coloured all seater stadium. The first thing that you notice is that hundreds of those seats have been broken. This must have been caused by excess celebrations after that victory over Real Madrid. 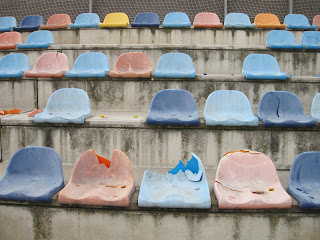 Beat Real Madrid 4-0 at home your seats will look like this.. 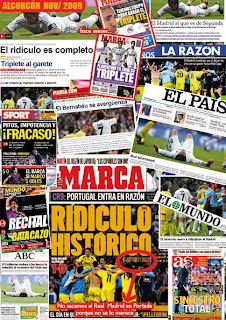 .....and the front pages of every newspaper in Spain like this.
These are giddy times for the club. They are due to take on Racing Santander in the next round of the cup soon. Tickets for this match (as well as the away leg) were being sold by a couple of chaps walking around the stands with a huge bundle of cash on them. Brisk trade was also being done in the club shop as shirts, scarves and pretty much everything else was selling out and fast.

After a couple of rousing renditions of We Will Rock You and with the sun not quite beaming its approval on the scene, the game got underway on what was rather marvellously - a pudding of a pitch.

The main stand was sold out and one of the fans in there was a complete loon/legend. He sang (into a microphone) alone for 90 minutes. His voice boomed out across the Municipal de Santo Domingo like an Indian call to prayer. Freaky but uniquey. 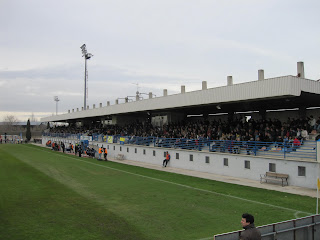 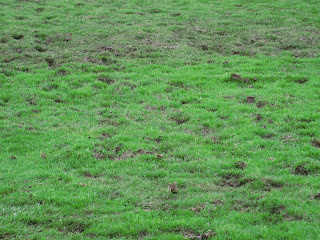 Pudding of a pitch (tick). 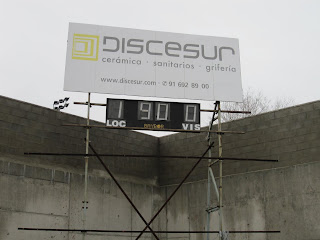 We all enjoyed watching match highlights on the electronic scoreboard at half time.
Cristian missed an open goal for Castilla early on but, what really had the locals talking was an incident on 18 minutes. Your correspondent with his right foot (I'm actually left footed) retrieved a wayward ball from the stands and lofted a perfectly chipped effort straight into the hands of Real Madrid left back Nacho (of course Nacho). He didn't have to move a muscle. Both coaches looked at each other in semi-amazement and I'm sure at least one of them jotted down a note. I'm still sitting by my phone awaiting the call as I type.

On the stroke of half time the home side took the lead with Lopez (of course Lopez) getting his nut to an inswinging corner. It was great to see the Real Madrid players collectively losing their rag, caked in mud and evidently not wanting to be anywhere near Alcorcón.

With the aid of a bent linesman, Castilla found their way back into the game three minutes from time. Juan Carlos (of course Carlos) equalised with what would have been the most undeserved point ever gained by a team in the nattily named Campeonato Nacional de Liga, 2a Division "B" Group II.

Luckily, for all the romantics in the ground, super-sub David Sanz was on hand to bring a bit of justice to proceedings. He chose the very last bit of action in the match to head home the winner and send the home crowd into another seatbreaking celebration. I stood with the ultras behind the goal in the second half and although relatively few in number, there was pandemonium in there when the goal went in. Some tried to pull the goal down in all the excitement. A brown besuited policeman saw to that though and stood triumphantly in the goalmouth afterwards beating his chest. Marvellous scenes. 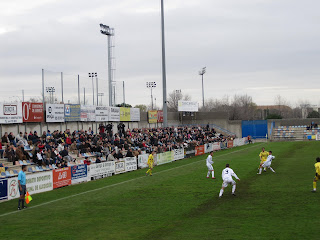 The other stand was fairly full as well. 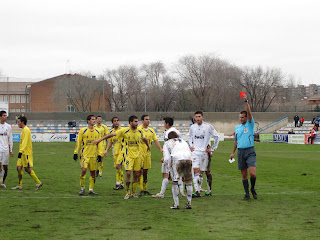 Of course there was a red card. Early bath for Gary (Gary!) of RM Castilla. 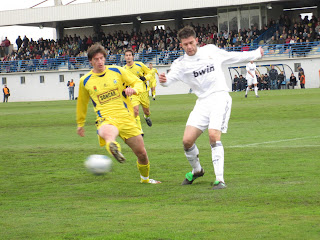 Juanan of Madrid clears from danger man Borja (yes someone gave me a team sheet). 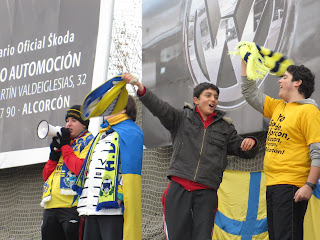 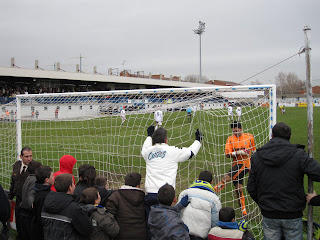 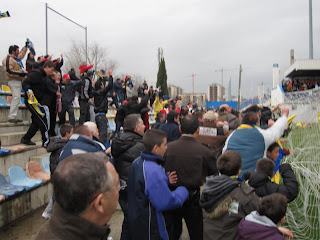 ...but very well with the locals. 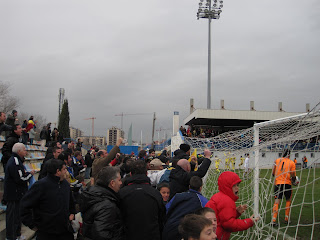 El orgullo de Madrid otra vez.
After the game, I reaped the benefit of this being a working class town rather than a tourist trap. For just €8 I was able to enjoy a three course meal complete with bottle of acceptable red wine in a little family restaurant near to the station. Don't mind if I do. After all, I had another match to attend at Getafe in a couple of hours. Thanks Alcorcón, el orgullo de Madrid otra vez.

Great report dude, even though I don't get the 'of course' joke. I enjoyed it immensely, even as a 'Madridista'

The 'of course' gag was reference to the very Spanish sounding names of those involved in the action 'Lopez, Carlos and Nacho'.

A very cheap gag indeed but hey, that has never stopped me before!

I went to Alcorcón a couple of months back for a Copa del Rey game vs Ponferradina. I was working in Madrid that week and Real were playing in a CL game - fifteen minutes from my flat - but for me there was only one destination that night.
A very fine bocadillo de chorizo to start things off, then that unmistakeable whiff you get at Spanish grounds - that of a cheeky spliff being passed around.
It was great being able to move around the stadium during the game and in the second half I sat near the Alcorcón 'Ultras'. When they look back on themselves in a few years time - when they get a few hairs on their little pigeon chests - they'll probably chuckle at themselves. A less scary bunch of Ultras I hardly remember.
Still, all good fun, as was the penalty shoot out at the end, won by Alcorcón. The whole crowd moved behind the goal where the penalties were being taken, which made for a great atmosphere.
An hour long journey back towards my flat and totally utterly worth it.