Even Gordon Brown can't save this Bank Darling 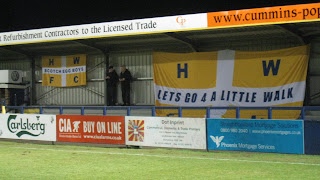 I usually work on Monday nights. However, you must be completely mad if you think I'm going to work when there is an FA Trophy 2nd round reply at Westleigh Park, Havant to attend. The original tie finished 3-3 and was a thrill a minute. Cynical Dave, Big Deaks and I had a heavy bout of FA Trophy fever. We weren't going to miss this for the world.

It was a day full of tension. Heavy rain meant it was touch and go as to whether the game would go ahead. On the train down (and across) from Gatwick, I sat daydreaming about those infamous muddy pitches at Derby County's Baseball Ground. It never did them any harm and there wasn't a blade of grass on that pitch at times. A nervous phone call to the club ensued. They confirmed the game was to go ahead. This was close to being the best news I'd heard in 25 years.

Cynical, Big Deaks and I met up at Havant station and then with a spring very much in our steps, we headed straight to the clubhouse at the stadium. It wasn't long before we were drinking with the rich and famous. Havant and Waterlooville manager Charlie Oatway was behind the bar and in front of it was former World Cup referee Paul Durkin (from Portland, Dorset). He now works as a referee's assessor which last time I thought about it is the easiest and best job known to mankind. Johnny Vegas was also serving behind the bar, or at least it looked like him.

We'd arrived early doors in time for plenty of beer. After a brief flirtation with some serious topical chat - Obama being sworn in/economic downturn/who's your favourite in Girls Aloud - we settled down and discussed some rather more pertinent issues, namely, could we name all the previous captains in a Question of Sport. Better than work eh!? 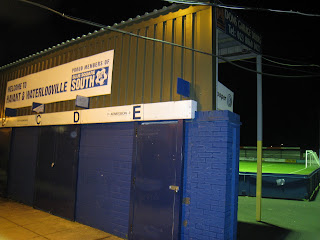 By now most of you will know the Lewes FC Story. Just briefly then for the uninitiated; manager (King) takes team from Ryman Division One South to Blue Square Premier in just five seasons, gets rewarded with the sack, all players leave aside from one, personalities clash, fans are outraged, inexperienced manager comes in along with new team of inferior players, money is scarce, club bar is run down, no battery in scoreboard, investment needed along with points. It's a circus but the excitement is intense (in tents) - do you get it!? 'it's a circus but the excitement is in tents'...(move on - Ed).

The match itself (finally - Ed again) was very much in keeping with Lewes's season. It was completely chaotic and actually tremendous fun to watch. It rained goals from start to finish. Havant and Waterlooville - I'll get bored of keep typing that out soon, shall we call them H&W from now on!? - raced to a 3-1 lead at half time. Half time was the queue for us to rush back to the clubhouse to sink another beer in one of their "plastic drinking vessels". The Merseyside derby was on the big screen but nobody appeared to give a rats. Nice. We liked that. 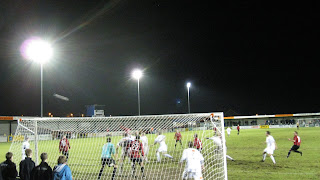 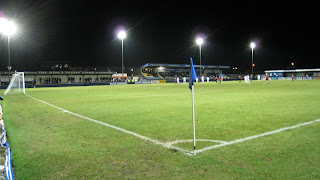 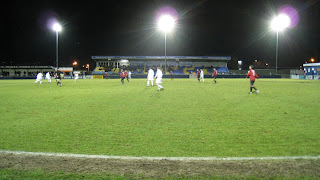 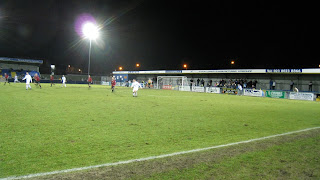 Incredibly, Lewes pulled it back to 3-3. The equalising goal seemed to defy the laws of physics but had Cynical Dave, Big Deaks and I running the full length of the terrace in cartwheels of delight like a loose bunch of headless chickens. Is there anything finer in life than being able to run around a terrace when your teams scores!? Simply splendid.

Then the Lewes keeper (Rikki Banks) had a moment to forget for which he will forever be remembered thanks to an EFW headline. It's not been a great few weeks for banks in general and now it was the time for Lewes's very own Bank to collapse. In soggy conditions he inexplicably tried to dribble the ball out of his own area - ran into ex-Lewes goal machine Paul Booth in the process - who casually relieved him of the ball and walked it towards the empty net before smashing it in. 4-3 to H&W and their fans could not believe their luck. 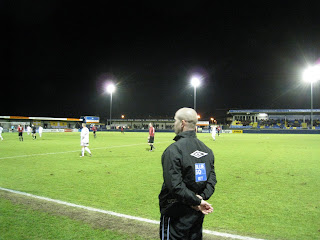 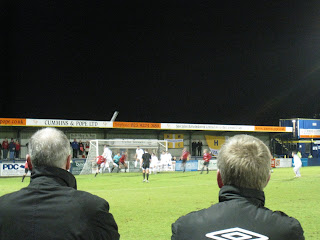 Under Fire! Lewes management team Keehan and Graves look on in mild disgust.
To be fair to the H&W fans, they were in tremendous voice throughout the match. Although few in number, you don't need to try that hard in Westleigh Park to create a good din. The ground lends itself to atmosphere. Their fans also have an obsession with 'scotch eggs' and 'Showaddywaddy'. What's not to like!? Good luck to them. 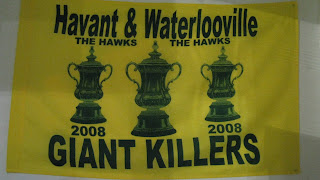 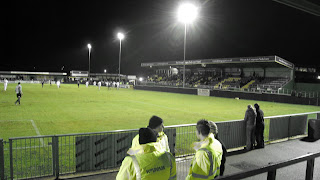 After the match we headed back to Havant station and decided to pop into the adjacent Star public house. Oh my God! Have you ever seen the programme 'Britain's Toughest Pubs'!? If this pub hasn't already featured in it then it will do shortly. The music was pumping out so loudly we literally couldn't hear each other talk. There was six (let's call them) 'characters' sitting at the bar. Next door there was a darts league match going on with more 'characters'. The pub gets a rating of 1.7 out of 10 on the beer in the evening website. It may be perceived as being rough but we shall be going back. It had four (four!) dart boards in it and there is nothing wrong with a pub with a bit of 'character' is there!?

Talking of darts (nice - Ed), I have now visited 179 football grounds. I calculate that the next one will be 180 or should that be 'one huuuuuuundred and eeeeiiiiiiggghhty'!? So where to go for that illusive 180th ground!? Well, there is only place surely - Dartford FC whose nickname is The Darts. So on the 31st January, Cynical Dave and I are heading to the aforementioned Dartford for their local derby with Maidstone. That my friends is entertainment. See you there. 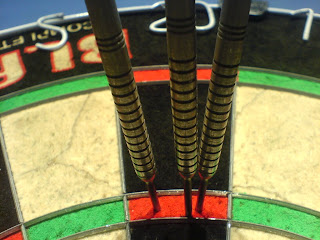 hi this is Jonny Vegas, from behind the bar at havant and waterlooville football club, this is the most funnest blog i have ever read and thanks for the truly hilarious comment, look forward to reading your comments next season when you come to visit.

Thanks for your comments. I wasn't sure I was offending you by referring you to Mr Vegas but glad to see you took it all in the spirit it was intended. As you can read, I don't have a serious bone in my body!

Please feel free to join our Facebook group and we'll see you again next season my friend.

Glad you had a good time Danny. I'm hacked off that I've missed these two Lewes games. 13 goals missed in the same Trophy tie. Arse!

It certainly was a belting match and no mistake.

For the uninitiated, Skif is a Havant and Waterlooville fan and writes probably my favourite blog on t'interweb:

This is mad from Scandinavia. My son James (which I happen to know from my days sinking the odd beer with you on trips to watch the Albion away from home is your middle name) wants to know if you're in Europe or Brighton right now. Kids eh?
Incidentally the Steelers (aka the Backflips) won a thrilling Superbowl last night. I drank beer (not a Bud in sight) and ate fried chicken to my heart's content. What's not to love?