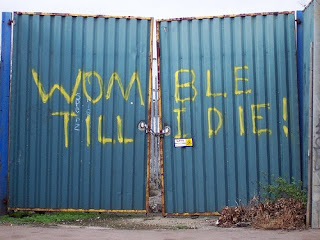 The Rise and Rise of AFC Wimbledon
Unless you've had your head in the sand, you can't have failed to notice the way AFC Wimbledon have risen - like a souffle - through the leagues at a rate of knots. The Dons have been mostly been welcomed with open arms on their travels, especially by chairman of Non League teams who - with pounds signs in their eyes - count up the cash as thousands roll up at each game to roar on their heroes.

This Saturday, EFW will be making the trip to Kingsmeadow to see AFC Wimbledon for the first time. Ahead of the visit of Forest Green Rovers, we dialled up Ray Armfield to find out more about the fairytale that seems destined never to end. Ray is a contributions editor to the AFCW programme, a Dons Trust Board member and has followed the Dons since 1971. Not a bad person to ask the following then:

Have the eight years of AFC Wimbledon been an unqualified success? I suppose the facts make it hard not to argue otherwise – to start from nothing and achieve four promotions, three league titles, two cups and set a 78-game British record unbeaten run in that time, not to mention the hard work and £2-3million worth of fundraising that’s enabled us to buy and improve Kingsmeadow. It’s been a unique learning curve of course and we’ve made mistakes along our journey, but we’ve tried to do things the right way on and off the field too. 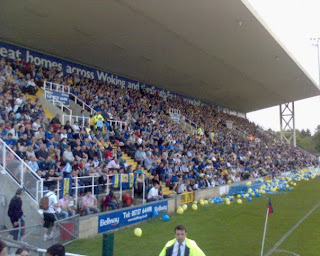 Another impressive away turnout for the Dons (at Woking)
What makes AFC Wimbledon so special? Personally, I’d say the people. There are so many supporters who give so freely of their time, effort and money to build our club and that unity makes us strong. There’s also the shared experiences of watching Wimbledon FC climb the pyramid to the Premiership, punch well beyond its weight (sometimes literally) and then in 2002 to fight back from seeing your club franchised. There is a real sense of wanting to right that wrong and it’s a powerful driving force for us all.

Have you outgrown Kingsmeadow? Almost. There have been several games in recent seasons where extra capacity could have seen another 2-3,000 on the gate and the higher we go, the more acute the situation might become. We are currently working towards making Kingsmeadow fully compliant for the Football League, but there are undoubtedly big and important decisions to be made in the future.

How far can the club progress under 'fan ownership' and what would happen if one person came in with a huge sum of money to try and buy the club? I think with the right people continuing to be at the helm there is no reason why we can’t sensibly plan to reach the Championship in our present guise. Fan ownership is at the cornerstone of what we stand for though and there aren’t many supporters who would jeopardise what we have built here for a ‘sugar daddy’ – no matter what carrots are dangled in front of us. In fact, a couple of years ago, businessman Darragh MacAnthony wanted to buy into AFC Wimbledon (and made some tempting-sounding statements) but despite saying he simply “wanted to have some fun”, ultimately he sought a controlling interest and his offer was quickly dismissed. He has, of course, since taken Peterborough United to the Championship – but there are no regrets on my part. 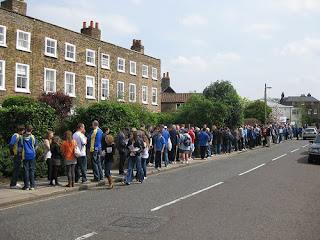 Queueing round the block to see the Wombles... 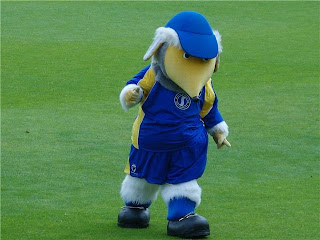 .....talking of which - it's club mascot Haydon the Womble.
Is a return to Merton Borough the ultimate goal? It is for most supporters. However ‘Merton’ can also be sub-divided into other categories, with some (like myself) who want a home specifically in Wimbledon itself and not simply anywhere within the Borough. Merton Council currently appear sympathetic and supportive – but we will still need to see that translated into something more tangible if we are to achieve the dream of going ‘home’ one day.

Have you gained any friends or foes in your rise through the leagues? I’d like to think we’ve made many friends along the way. Travelling to games on public transport, I’m often complimented and wished well by fans of other teams and perhaps a wider barometer of that came when we were deducted 18 points by the Ryman League for fielding a player without International Clearance and a (successful) petition to overturn that decision was signed by thousands of supporters from all over the world. Of course, not everyone likes us and the cosy and often insular pond of non-league football has seen the likes of ourselves and FC United put some ripples on it simply by being different. We’ve had ‘issues’ with a few clubs for various reasons – Ramsgate, Bromley and Hampton spring to mind – but generally it’s been very positive.

It won't be long before you're playing MK Dons on a level playing field. Surely chaos would ensue at that fixture? It’s a fixture I never really want to see happen. An away game there would probably split our support – many (like me) wouldn’t set foot inside Stadium:MK, some would travel but not enter the ground and others would actually want to see the match. A home game would see a bear pit atmosphere and make Galatasaray look like a genteel afternoon at county cricket by comparison. I’m not even sure I could trust myself to behave. Though I’m sure the likes of Sky Sports would lap it up. 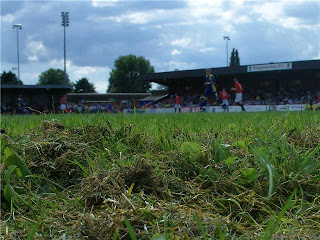 Grass Roots. From the Premier Division of the Combined Counties in 2002.... 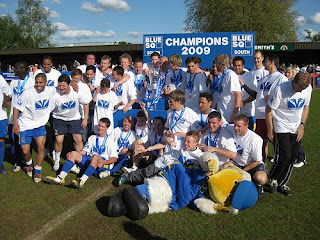 ......to Conference South Champions in 2009.
MK Dons got shortlisted as a World Cup venue should England stage it. Any thoughts? Having been completely and utterly failed by the football authorities when Wimbledon FC were franchised to Milton Keynes in 2002, it came as no surprise to me when they were included within the bid. As Jim White so aptly put it in the Daily Telegraph the day after the announcement was made “Meanwhile, in Wimbledon they must be looking on in astonishment at the glittering rewards of theft.” We have expressed our anger at the decision to the FA and other movers and shakers, but it has certainly stoked the fire that is always simmering away within many of us.

We like a beer with our football here at European Football Weekends, what is the clubhouse like at Kingsmeadow? Now we can certainly help you there. We have three bars at Kingsmeadow – a President’s Lounge (exclusively for match sponsors etc), the Main or ‘middle’ bar that holds up to 200 people and the ‘back’ bar that caters for between 60 – 200 and is also used for our successful ‘Kingsmeadow Live’ comedy nights held on Friday evenings. There is usually real ale available if you get in early and the back bar serves food too. Unless the opposition supporters fall in to the ‘proper nawty’ category (which doesn’t happen very often) then the latter two bars are open to all. Also if the weather’s good you can take your pint outside and have a chat before the game – and our ground admission prices are just about the lowest in the division too. Which is nice.

Can you sum up AFC Wimbledon in a Tweet of less than 140 characters? We’ll entertain, feed and water you, read an award-winning programme and even meet the players afterwards. And you’ll still have change from £20.

Thanks to Matt aka Chalfont Don, Stuart Fuller and Karl Adam for the photos.

Join us for Part 2 (this Sunday) as we reflect on the AFC Wimbledon matchday experience.
- Feel free to comment below -

EFW just gets better and better our kid! Superb stuff.

@eurostadiums, Rock on. Power to the people!

@Perker - Nice one pal, many thanks!

Hugely interesting and I think all fans would wish AFC Wimbledon well. One thing makes me worry though - there was general, mystifying hostility in the press when the old Wimbledon, in their eyes, outstayed their welcome in the top flight. Whereas I saw the 1988 Cup Final win as a victory for the forces of goodness, Fleet Street/Wapping portrayed it as a triumph of thuggery in many quarters - as AFC rise up the ladder, jealousy from around will grow.

I was wondering if there is a school of thought that it is immoral to watch MK Dons in any match - even a home one? I would certainly think twice.

@Laterne Rouge - There are still many away fans who choose not to travel to MK Dons and When Saturday Comes (football magazine) still refuse to acknowledge their existence.

Agree with your first paragraph as well old chap.

@Michael - Maybe we will cover FC United on these pages in the coming weeks. I think they differ from AFCW in that some fans still support both FC and actual Man Utd. I could be wrong on that score though - wouldn't be the first time eh!

I love to watch live football matches.But It is not possible to watch every match (tickets are expensive).Therefore I am participating in manchester united match tickets Prize Draw to SO that I can win the tickets for free and enjoy these matches.