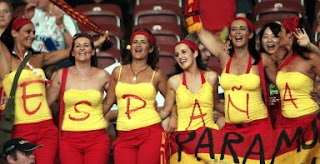 Take me home country road
Spain 1-0 Portugal (29:06:10)
This is the last of 'Bafana' Tim's World Cup Journals for EFW. I hope you've enjoyed reading them as much as we've enjoyed bringing them to you. Like the actual England team but with much more of a reason - Tim is worn out. He did manage to scribe this fine effort before heading back to Blighty though:
Greetings all,

After yet another 16 hour bus journey I saw Spain in Cape Town last night in what will, flights permitting, be my tenth and final match of the World Cup.

The Greyhound bus was pretty typical of my World Cup travel experience. The bus was due at 9pm. They failed to send me the promised text message to say it was delayed, so I turned up to be told it was running two hours behind. It turned up later than that and arrived in Cape Town four hours late. On the plus side, the delays meant I got to watch Brazil-Chile on TV and saw the beautiful winelands region in daylight.

That area almost summed up South Africa. There were snowy, mountain peaks and attractive vineyards - and then corrugated township shacks. It was the same on the Garden Route - grinding poverty in the midst of stunning scenery. As with India or Brazil, there is the most striking disparity of wealth and unless you are happy living in a bubble, it is difficult to ignore.

I have been in something of a sulk about England's World Cup dreams being run over by a ten tonne German truck. Cape Town is currently wet and dreary and doing little to lift my mood of despondency.

The Spanish, however, were superb last night and would be my clear favourites to win the tournament if only Fernando Torres was fit and firing. It's hard to escape comparisons. They have centre back Gerard Pique spraying the ball around nonchalantly from the back. We had Matthew Upson hoofing and lumbering about with the turning circle of a tugboat. Spain have Xavi and Iniesta harrying the opposition and playing clever little passes into the front men. We had Gerrard and Lampard steaming forwards to no great effect, leaving huge holes behind them. And they have David Villa cutting in from the wings to devastating effect while we had Rooney looking like a long season had wiped him out.

My predictions are pretty much unchanged from before the tournament started. Brazil and Spain are the two best all-round teams. Argentina are the wild card with an awesome attack but suspect defence. And the Germans and Dutch are both strong enough to go all the way with a bit of luck.

If I could be guaranteed that Messi, Tevez, Di Maria and Higuain would wipe the floor with the Germans, I would be sorely tempted to stay on for Saturday's quarter-final in Cape Town with Brazil's semi also here the following week. I had planned a side-trip to Durban in between for some sun. But it would surprise no-one if German efficiency overcame Argie flair in a repeat of the last World Cup - and I am so over German victory celebrations.

More importantly, Ruth is in London and so I am trying to get a standby flight out of Cape Town tonight. Somewhat shamefully (for male readers), love is triumphing over love of football.

This has been a much more difficult World Cup logistically then the last one in Germany - but much more colourful. The stadia have all been world class and, in the case, of Soccer City and Cape Town's Green Point magnificent. Some of the matchday and public transport has been atrocious and greedy accommodation providers have ripped visitors off with prices inflated three to fourfold. But most South Africans have been very friendly and gone out of their way to help tourists. South Africa is a beautiful but challenging country to visit. I have had a blast but am worn out from too many hours on buses and not enough in a comfy bed.

I expect Brazil in 2014 to be even more of a carnival but with many of the same organisational issues as FIFA couldn't care less about the lot of the ordinary fan. Bring it on. Hope you've enjoyed the blog.

Hi Tim, thanks for sharing your South African experience. Some great reports, good writing indeed. Hope to meet up again one day, be it Poland/Ukraine, Equatorial Guinea/Benin or even East Anglia...

1860er and others. I received this emeither from Tim today:

Ruth's work and British Airways' flight loadings have just combined to give me a footballing reprieve. I'm aiming to come back Sunday now - after Germany-Argentina!

So he'll be back back back for one last hurrah in a few days.

Thanks for your reports. They were a joy to read.

Besides that I completely agree with your predictions about possible winners, although I hope that you are wrong about Brazil :-).

PS Might be that you met groundhopper Alex who wants to attend 32 matches during this World Cup.
http://www.footballfans.eu/wc2010/alex-blog
He will be attending Germany-Argentina as wel.

Enjoyable pieces… but the transportation issues you described make me sooo glad I didn’t go, the match times in the US have been perfect for me, I wake up to watch the early match…trek to work for the second

Watch out Chaz, that you do not run into the streets when Holland is beating Brazil and you are very happy about it ;-)

Enjoy the match today and let's all cheer for a Dutch victory.

FOOTBALL Fran.....here is my halftime comment from my facebook page..."I'll stick with ROBBEN to make a comeback for da Dutch (it's half time) brazil 1-0"

I've been a Robben fan all Champ L/Bundesliga season...despite his play acting today...Are the Dutch happy today or just not miserable? I like watching the Dutch league, it "looks" great, always grey, muddy, and wet...Is that Ola Toivonen a potential world-class player? He seems talented...

Remember that the first international match was between Scotland and England (1872).