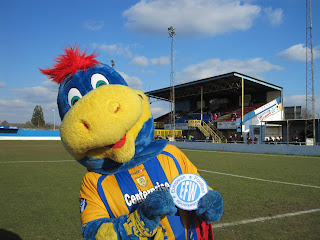 - Click on photos to enlarge image -
Sometimes prior to a match, I'll have a little surf through the interweb to see if a town or club I'm visiting throws up any gems to wax lyrical about. Upon researching Basingstoke, I hit the Tanita Tikaram jackpot squarely on the head. Arguably one of the town's more famous Indo-Fijians, Tikaram resided in Basingstoke for many years after initially being born in Germany. Was she back in town? Would she turn up at the match? Our fingers were certainly crossed.

There isn't much of a good tradition of love or hate between The Rooks and The Dragons, so the EFW Team set off to put this right and try and build some Waynes (bridges). We err on the side of love rather than hate on these pages. On days like these the EFW Team doubles up as the Lewes Lunatic Fringe (LLF). Don't be alarmed though, the LLF are the antidote to hooligan firms. Danny Dyer can sleep easy when the LLF are in town. Its funnies and not fighting we live for.

In a little twist in my sobriety, I was back on the beer for this match after a self imposed two week booze ban. Beers in Basingstoke (Beersingstoke?) were certainly on our pre-match agenda and with the ground almost two miles from the central station, it was going to be thirsty old work and no mistake.

Upon our arrival in town four hours before kick off (you can never be too sure eh!?) we made a beeline for the Winton pub and thanked our lucky stars it was a Conference South match we were going to be pitching up at and not an International friendly. Fans attending Eire v Brazil at the Emirates earlier in the week paid a minimum of £33 - plus booking fee naturally - for the "privilege". When I found out that little fact, I had to have a sit down for five minutes and a rub down with the Non-League Paper to recuperate. 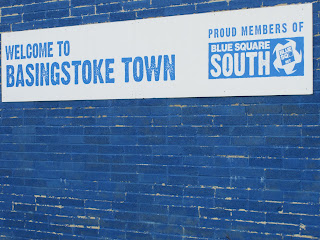 Anyone got Banksy's mobile number? 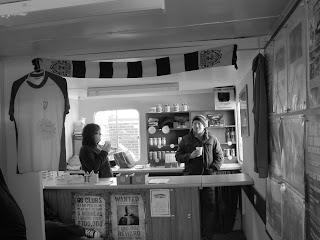 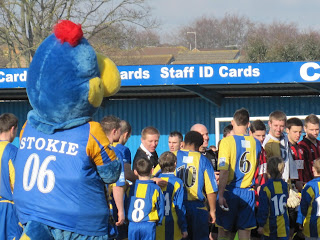 Can I see your Staff ID Card again please Number 6? 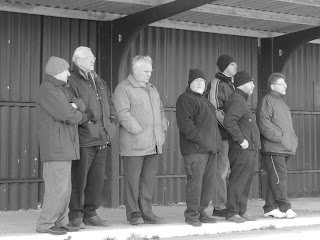 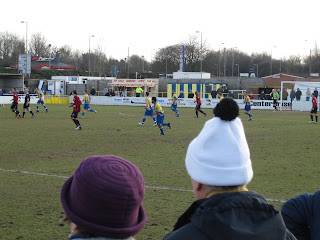 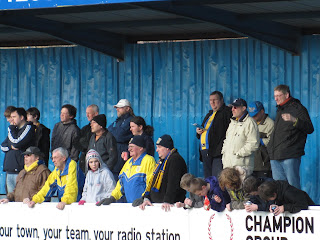 Any old (corrugated) iron?
Contrast those greedy cats who made up those poppycock prices for a friendly with Basingstoke Town FC. In a bid to increase the attendance at this match and boost their bid for a play-off spot, gurus at the club reduced prices to just 5GBP (5GBP!). You can't even buy a cream cheese bagel in London for a fiver. Hats at a jaunty angle, 5 FIFA stars etc to the big cheeses of BTFC.

Anyway, where were we? (in the pub probably - Ed) Oh yes, in the pub. Despite being described as a "characterless working class pub with surly bar staff and forlorn handpumps" on the Beer in the Evening website, The Winton ticked all of our boxes ie it had a dart board and served a passable pint of Guinness. The forthcoming live music events in said pub though are to be performed by a collection of the worst named bands on planet earth. Stepping onto the stage will be; Dual Control, Energy, Roadrunner, Strange Deal, Titanic Survivors, Just Testing, Die Laughing and Uncle Jacks. Not a FIFA star in sight for any of those. 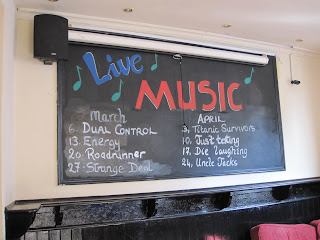 Not a FIFA star in sight.
After 18 legs of darts, we were picked up by Fullers Stuart and Lolly and transported to the ample clubhouse at The Camrose. The locals were showing a partial interest in the Portsmouth v Birmingham FA Cup match on the big screens inside. For 0.000000641025% of Pompey's reported debt, one can watch an afternoon's football in the town Tanita Tikaram once called home.
So what did we get for our five English pounds? Well, proper hacks would've probably described the game as "a little scrappy". It was a match of very few chances and wasn't helped by over officious referring by Wes Linden who incurred the wrath of both sets of fans. A strangely subdued Cynical Dave let the officials off lightly and seemingly concurred with every decision. We nicknamed him William for the day. William the Concurrer.
Lewes took a lead into half time courtesy of Joe Keehan noggin. His headed goal in the fourth minute was his 14th (fourteenth!) goal of the season. The EFW Team were joined in the second half by England cricketer Shaun Udal whom Big Deaks had spotted - from over a hundred yards - earlier on. Our early banter with him was briefly interrupted by the delightfully named Jide Ogunbote. Botters headed The Dragons level which caused Udal to star jump around the terrace. He thinks Basingstoke Town are Tina Turner of the Conference South (Simply the Best). Good luck to him we say. 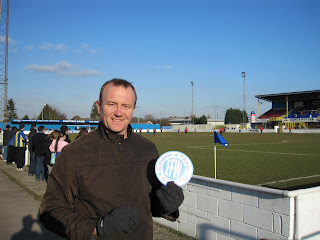 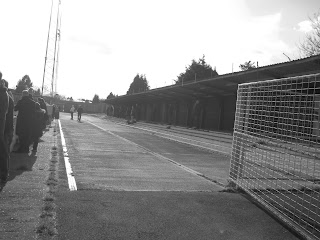 This terrace doubles up as a local runway apparently. 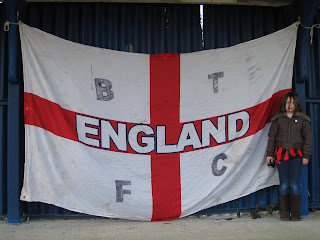 Lolly Fuller gets ready for the World Cup. 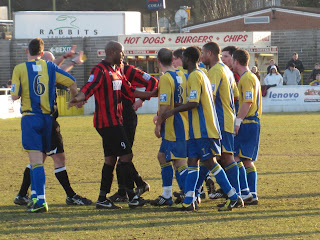 The queue for Hot dogs, Burgers and chips gets a little heated. 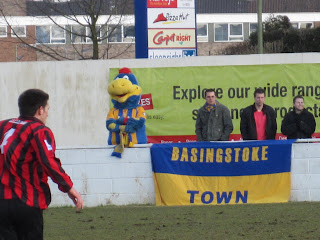 Explore our wide range of mascots? 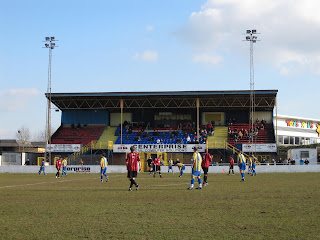 The main stand. Can't think of a pithy one liner for this photo. Sorry.
1-1 at full time then which, on reflection, was fair enough. We said our goodbyes to Udal and a 6ft man dressed as a dragon, who apparently was the club mascot. Dave Partridge, who is the Director at Basingstoke told us earlier in the week that the club had adopted "The Dragons" nickname a few seasons ago to give the club a "stronger image". Rumour has it that they were going to be called "The Basins" but that idea was dismissed on the grounds that the "Barnie the Basin" costume for the mascot was simply too tricky to stitch together.

Anyway, enough of all this football and mascot talk *a nation cries* what of Tanita Tikaram!? Well, she didn't turn up to the match but she was kind enough to give EFW five minutes of her time for an interview. Several million album sales and still willing to talk to us. Can we award 6 (six!) FIFA stars!? :

Hi Tanita, Have you ever attended a Basingstoke Town match? Hi, erm....no, sorry!
Do you have any interest in football? Well, like most children I enjoyed playing football, and my brother & I were avid fans of the football comic ' Scoop' ! Growing up, I also loved watching the World Cup with my father . However,as an adult I'm not so interested in football.

Are you proud to call Basingstoke home? Well, my parents still live in Basingstoke and they are very happy there so of course I still feel a strong affection for the town.

Are you still gigging and releasing records? I will be recording a new album this year but you can also listen to my podcasts on my website where I perform acoustic versions of some of my older songs .

That's brilliant Tanita, thanks for your time. Thanks Danny! take care and have fun in Basingstoke , tt. 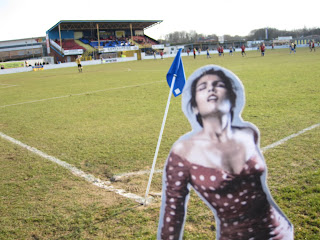 At last. TT at BTFC.
For more photos from the day CLICK ME
- Feel free to comment below -
Posted by Danny Last at 10:40

Liking the blog as usual Danny. Forza the Lewes Lunatic Fringe a decent turnout there. On the other hand I thought considiring their position and also the ticket pricing they could have got a few more through the turnstile.

Genius. A non league report with an Tanita Tikarum interview chucked in, absolutely free. Can't grumble at that.

A challenge for you next season Mr Last: do an interview with a local celeb for each away match.Wadaurekon?

That would be 'a' TT interview by the way...

@Ali - Thanks for your comments as always my friend. I agree the crowd figure was a little disappointing factoring in the cheap tickets, perfect weather and a six foot dragon to play with.

@James - A nice idea. My next Lewes away game is at Bishop's Stortford. That place must be bursting with local celebrities no!?

loving your work, danny. just one point on this piece...

cream cheese bagels can be obtained for well under a fiver in london. just head to the 24 hour bagel shops in brick lane. looking at about a quid. and they're damn tasty. best bagels in the land.

just promise me you'll not go to any of the awful curry houses there.

So what did we get for our five English pounds? Well, proper hacks would've probably described the game as "a little scrappy". It was a match of very few chances and wasn't helped by over officious referring by Wes Linden who incurred the wrath of both sets of fans.