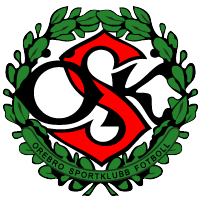 SIXTEN'S THE RICHER
On the eve of the Swedish football season Andy Hudson brings us an exclusive interview with John Alvbåge and introduces us to the biggest team in Sweden you may never have heard of, until now....

A quiet revolution was taking place in the Allsvenskan last year; a revolution that went almost unnoticed on these shores. A revolution instigated by a Finn.

When I mention Örebro SK to most English people there’s an immediate look of confusion. When they think of Swedish football they’ll think of AIK or IFK Göteborg or that 1994 Swedish national team. When they think of Swedish players they’ll think of Zlatan, of Larsson, of Brolin and Dahlin; players who all register as a result of becoming etched on your brain when accomplishing much outside of Sweden. Due to the ability of the Finnish coach Sixten Boström there’s a quiet hope that Örebro, runners-up in the Allsvenskan twice in their history and runners-up in the Svenska Cupen (Swedish Cup) a solitary year, could start to make in-roads on the collective brains of fans across Europe.

Boström took over at the Behrn Arena in 2008. One of his first acts was to dispose of the 442 system and change to a 433 system. Fans said that the change of system would not work and early results suggested that they would be right. But Boström held his nerve and his tactical ideaology. Coaching and savvy dealings in the transfer market for players such as Roni Porokara helped the system to bed. In the words of John Alvbåge, Örebro’s goalkeeper and fans’ favourite, Boström “changed the club’s DNA; we were quite a boring, defensive team to watch but now we attack and are a spectacular team to watch”.

After finishing sixth during the 2009 campaign there were hopes amongst players and fans that the club could improve. Alvbåge told me he “had a dream that we would be a top team but I didn’t actually think we would be. But I did know that we had it in us; if you look at our first choice team we have top quality in every position”. 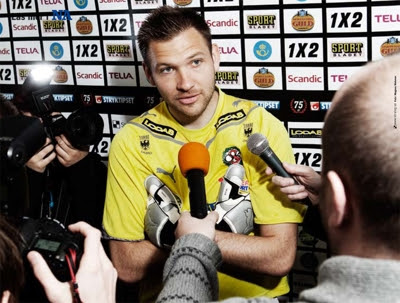 Shot-stopper and fan favourite John Alvbåge
Stand-out performers last season were players like Nordin Gerzić, the creative heartbeat of the side; the American international Alejandro Bedoya, signed from Boston College at the start of the 2009 season and who seems to run a marathon every game; the central defensive pairing of Magnus Wikström, a giant figure at the back who rarely loses a header, and Michael Almebäck, one of the fastest players in the Swedish top-flight; and Alvbåge himself, the Swedish back-up ‘keeper at the 2006 World Cup and who will surely find himself in another international squad soon courtesy of his top-class, consistent performances. Still to have his “special day” since signing for the club originally as a youngster in 2003 before moving away for a three year spell first at IFK Göteborg and then the Danish club Viborg before returning to the Behrn Arena in 2008, Alvbåge points to the 3-0 home victory against Helsingborg, who would go on to claim second place, in August 2010 as an “awesome day for the club”.

Last season saw Örebro finish third and and as such will take their place in the Europa League qualifications rounds during the summer of 2011. There was much talk of Boström leaving the club at the end of the season. Scandanavian media linked him to the vacant Finland national team role when ex-Örebro player and youth team coach Stuart Baxter left the position in November 2010. According to Alvbåge it would have been “a catastrophe for the club if he had stopped his project; his style of play is still under development and we have come so far”. As the club gears up for their 2011 season opener against IFK Göteborg they have their influential manager still at the helm. 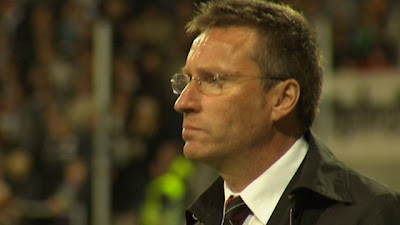 Örebro SK manager Sixten Boström
Boström’s project is vital to the future of the club in the eyes of the fans and players alike. Alvbåge also identified other improvements needed for the club to progress even further in 2011. “We can be better everywhere” he told me, “but if we look only on the pitch then we have to perform better away from home next season; we are so strong at the Behrn Arena. If we can add one or two experienced players to our young squad then that will aid the team for the season ahead”.

According to Niklas Landmark, a Behrn Arena season ticket holder, there’s agreement in the stands with Alvbåge. “Qualifying for Europe has helped us keep most of our players but if we can add a couple to the squad with experience, along with a striker who will reliably score, then we can be in the title race in 2011”.

Örebro have made close-season signings to complement their forward options. Two signings made for the 2011 season are Kosovans; hopes are high that at least one will become a reliable goalscorer. Valdet Rama has arrived with Bundesliga experience with Hannover 96 while Kushtrim Lushtaku has signed from 1860 Munich. Combine these players with the youthful talent of Marcus Astvald, who improved a lot during 2010 and is the Swedish player to watch in 2011, and other recent signing Andreas Haddad, who scored 8 goals in 14 games for Superettan team Assyriska FF last season, then there are goals in the team.

Örebro's Behrn Arena has become a fortress
And how do I think Örebro will get on in the coming season? Away form is vital but if they manage to keep hold of their youngsters during the summer transfer window then there is no reason why they won’t be challenging for the title. If Alvbåge can cement his position as the best goalkeeper in the Allsvenskan then Örebro will be very difficult to beat .

2011 could end up being the greatest season ever for the club if they break their duck and clinch some major silverware. Beyond this season they may very well struggle as bigger clubs will take their crown jewels such as Boström and Alvbåge. I’ll be at their second home game of the season, a Monday night game against Gefle, reporting for EFW to see what kind of start they make.

Follow Andy Hudson and European Football Weekends on Twitter
Andy is the editor of Gannin' Away
- Feel free to comment below -
Posted by Danny Last at 10:24

Great report on a great team!

I was in Sweden in 2010 and had the oppertunity to see Orebro SK play against Helsingborg in Behrn Arena. I've never seen a team so humiliated as Helsingborg were that night. It was a fantastic game and i think that Orebro scored at least 7 goals but only got 3 on the scoresheat.
I later learned that this Helsningborg team was runner up in Allsvenskan after Malmo FF and that Orebro only finished 3rd.
If Orebro can play the type of football (and they can, I've seen it) as they did against Helsingborg, I would think that they will have no problem making it to the groupstage in Europa League.
And all eyes of the media will be on the small team from the small city of Orebro.
You go Orebro and welcome to south of France for a game against Marseille at any time!

you really nailed it, bro! we are all so proud of what the team has achieved in such a short time, and the fact that we probably have the nicest style of play in the whole Allsvenska. hope you enjoy the game on friday!