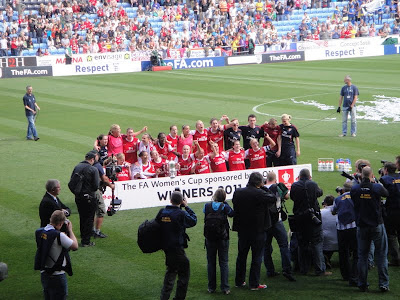 The Female Of The Species
Arsenal 2-0 Bristol Academy (21:05:11)
To our eternal shame, we've yet to feature the women's game here on European Football Weekends - until now. Putting that to rights is Ryan Keaney, Editor of The First Eleven who had the pleasure of visiting The FA Women's Cup Final in Coventry.....

A tension fills the air. Two AFC Wimbledon fans peer up at the screens to check the time of departure for their train to Manchester. Neither says anything. They can't quite vocalise how they feel. They don’t want to. There is too much trepidation. Too much hope. The taller one, the one on the right, mumbles something about going to Burger King and sulks away. I'm one of those two men. I’m not even travelling with them. I'm standing near them. I've shuffled over to bask in their feeling of worry and anxiety as I have no allegiance to either side in the game I'm going to watch. I loiter with intent, soaking up the early morning atmosphere.

Thinking about it, it's unfair to give the impression that I'm going to the same game as them. You know I’m not anyway. Their destination is the City of Manchester Stadium and the Conference Play-Off final. I'm headed for the Women's FA Cup final but in the absence of any Arsenal Ladies and Bristol Academy supporters to interact with; they seemed the best bet.

That's right. My eventual destination is the Ricoh Arena in Coventry via the scenic-route-travelling train that takes nearly two hours. The "normal" (read: far too expensive for a man still getting used to the harsh financial reality of living in Putney) route would have got me there in 56 minutes; but not the super off-peak return ticket I’ve picked up. But it's okay. I'm on a mission to discover women's football. A mission that started less than 48 hours prior to the game kicking off; so I don’t mind an extra 44 minutes on the train. 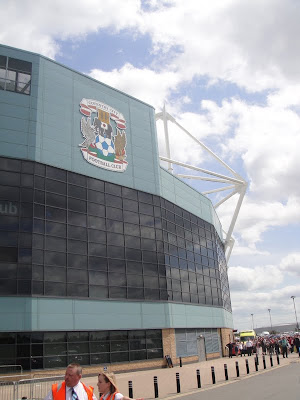 She, my better half, has a habit of travelling for her work. When She is gone, there is no-one around to reign in my careless whims that normally end on a second thought. She is the someone that forces me into a realisation of impracticality and the notion that I may be concocting a plan that will end with me frittering away my pennies. Without that someone to force me into the much needed second thought, I embark on missions.

As such, on Thursday afternoon at 3:36pm I had a spark of brain activity.

By 3:43pm, my train ticket was booked and ticket purchased for the showcase of the women’s domestic game.

By 3:51pm rolled around, I'd also sorted myself a ticket for the Women's Champions League final at Craven Cottage but that will be another story for another day. Maybe tomorrow.

The train split into two at Northampton, with the front four carriages heading for Crewe and the rear carriages taking everyone else to Coventry. Having sat in the fifth carriage I did have a minor panic I was in the wrong place. My mind was swiftly put at ease by a lovely Nigerian woman.

I'd never been to Coventry. Once I had gotten over seeing it for the first time (7 seconds) and used up my string of jokes about seeing potential Arsenal Ladies players Andrea Arshavin, Jackie Wilshere, Nicola Bendtner and Robin van Persie (3 minutes 28 seconds); I educated myself on the two teams.

For those of you that don't know, Arsenal Ladies are the dominant force of British football; winning basically every title going. Imagine the exact opposite of their men's side. They were in search of their 11th cup triumph in their history. Bristol Academy had reached their first ever FA Cup final, having lost out at the semi-final stage on five previous occasions before this season.

Given that Arsenal Ladies currently sit second in the FA Women's Super League and Bristol are fifth with seven points from seven games, I only expected the match to go one way. As a Manchester United fan and even though we don't have a women's team; a big part of me wanted it to go Bristol's way or at least to penalties.

The play was neat and tidy and the ball control was very good. The Bristol players knew that they job was to try and upset the odds but in Rachel Yankey, Ellen White, Katie Chapman and Julie Fleeting; Arsenal possessed the flair player, the fast-rising superstar, the midfield dynamo and the clinical finisher of the British game. 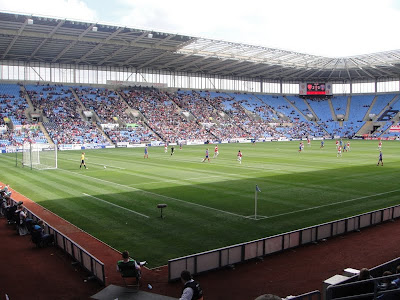 In Jess Fishlock, Bristol had a hope and a prayer of something happening. Fishlock had scored in every round on their way to the final and was seen as playing a vital role in any success Bristol would enjoy.

Sadly for this neutral, they didn't get that something they needed. They battled hard, defended well and didn't panic. Unfortunately, they didn't trouble Arsenal. The Academy's tactics were clear from the start. They put bodies behind the ball and tried to hit Arsenal on the break. Fishlock was expected to link up with Anne-Marie Heatherson as much as possible. It was on them to conjure up a chance; while Arsenal supposedly toiled in front of the West Country rear-guard action.

The Gunners didn't toil. They exploited their straight-line speed on the wings. Bristol tried to congest the central areas with bodies, so Arsenal simply drew back and put the ball in over the heads of the fullbacks with White and Yankey doing the chasing. An Arsenal with a back-up plan; I couldn't believe my eyes.

But for some fine saves from Siobhan Chamberlain in the Bristol goal, Arsenal would have won the game by more. Of course, if Chamberlain hadn't of made one of her early saves, the game would have infinitely different so who is to say that the score may or may not have been. Oh well; it can't be changed now. It's over. It's finished 2-0. 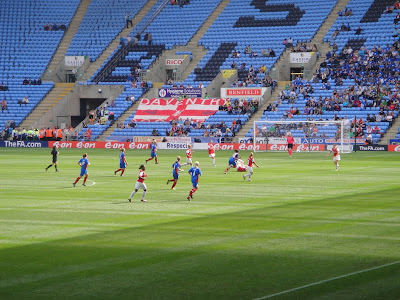 Kim Little and Julie Fleeting, both Scottish internationals, scored first-half goals that settled the tie. Little, busy through the game at the forward point of the midfield three, cut out a poor clearance, sold a defender a dummy and then sent the 'keeper the wrong way. Fleeting added the second on the half hour, moments after Chamberlain had kept matters competitive. She tipped a free-kick onto the bar and then made a point-blank stop from a volley before the number 10 nodded Little's cross past her before she could react.

If some life was sapped from the Bristol players thanks to Fleeting's fine finish, it was completely gone when Fishlock failed to return for the second half. She was Bristol's most promising hope of a comeback into the game but went down in the 41st minute after an aerial class with Jordan Nobbs. Four minutes of treatment and the half-time break wasn't enough for her to return. Without their talisman... taliswoman... talisperson? Without their leading star and her streak of dazzling white hair, the belief amongst the Bristol players appeared gone.

Her replacement, Lillie Billson tried valiantly to link-up with Heatherson as much as she could but she lacked the ability of Fishlock to take players on; and on numerous occasions she didn't get the chance. Instead of trying to build an attack, the Bristol defence resorted to clearing the ball into Arsenal's half where none of their players were. Laura Harvey's side were allowed to build attacks steadily from the back without the pressure and harrying that had been ever-present in the first 45 minutes.

It was all far too comfortable for Arsenal so much so that I went for a wander at the beginning of the second half. I did so that I’d be in a better position for the eventual trophy presentation on the other side of the pitch. I did so, safe in the knowledge that Arsenal were unlikely to lose possession while I was gone. They didn’t. I kept tabs on them via the scenes in the concourse showing Sky’s live coverage of the game.

In the end, it was nothing like the 2-2 draw the two teams had played out just eight days before this clash (if the highlights on the FAWSL are anything to go by). Still, it was well-worth the £5 entry; even if sodding Arsenal won. 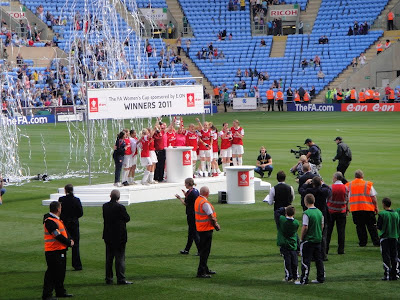 Ryan is the Editor of The First Eleven
You can follow Ryan, The First Eleven and European Football Weekends on Twitter
- Feel free to comment below -
Posted by Danny Last at 10:20

Great report. I have been to a lot of women's games. In my native Belgium, the city I lived next to had two quite good teams in the top division of Belgian women's football. Here in Spain where I live now I sometimes go to my local barrio team which also has a ladies team. In my opinion women's football definitely deserves more credit: it may go a bit slower than men's football, but technically some of these ladies can do the most amazing things with the football. Physically there is a difference with men, but I have seen a few women who are technically as gifted as the average male top player. Also, what I love most, is the fairplay involved. I have seen many women's games now and still have to see a game in which players try to fool the referee, try to fake injuries to get the opponent booked, ... Women's football still has a lot of fairplay involved, in that respect it even deserves more credit than men's football. But for sure, the better female players will maybe have less physical abilities than their male counterparts, but their technical skills will be equally good. I recommend anyone to go to a women's game, you'll be very pleasantly surprised!