Nou that's what I call a holiday. 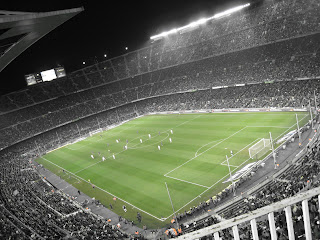 With eleven festive days in hand it would have been far too easy to fly directly from London to Barcelona. Therefore the wife and I escapaded our way across Spain like Don Quixote and Sancho Panza getting into little adventures en route before making our way to Catalonia.

We travelled through Castilla La Mancha taking in Madrid (my favourite city in Europe), Cuenca (where I got married in 2005 and home to the best tapas in Spain), Cañete (where I spent a few nights drinking until silly o'clock) and Salinas del Manzano (population 107 and home to my in-laws, who live above the only bar in the village, which they own - good old life). 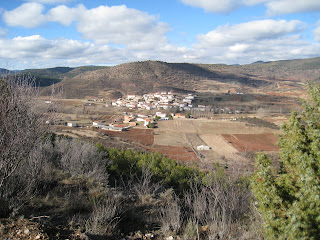 In Cañete I met Vicente Adam Carrasco. Vicente Adam Carrasco! Vicente used to play for UD Salamanca in the 70's and he was there celebrating Christmas with his wife and friends. As we propped up the bar he told me of the days when he used to man-mark the likes of Mario Kempes, Hugo Sanchez, Johan Cruyff and Laurie Cunningham. Indeed Cunningham used to visit his house and Vicente has promised me photographic evidence of this in the near future. 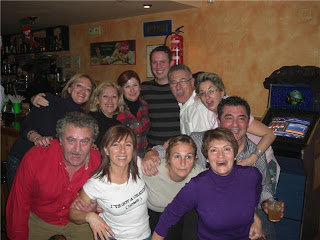 He we all are in Bar Jaleo, Cañete at around 4am. Our man is in the white shirt and glasses.

The chap in the red shirt (in the above photo) told me he was the one who advised Lionel Messi to go to Barcelona. He also said that if Spain was a doughnut, Real Madrid would be the whole in the middle. Who knows if all this is true but it was a great night whatever.

After a week of eating, drinking, walking and talking it was time to head to Barcelona. To get there from Salinas del Manzano, we had to take the coach. There is only one a day and in order to get tickets, I had to flag down the coach two days beforehand and pop a note to the driver with my instructions. The following day, I had to flag down the coach again and the driver popped the tickets out of the window. On the third day we actually boarded said coach. Good old (village) life!

The coach took eight hours. It was most amusing to observe the colour come back into the faces of my fellow passengers each time we stopped and they could smoke again. I guesstimate that 98% of Spaniards smoke and it's my (unfounded) belief that they teach smoking in Spanish schools.

We stayed with friends in Castelldefels just outside of Barcelona. It's a small town in which Lionel Messi (him again), Ronaldo, Ronaldinho and a host of other footballers have houses. In fact Messi (him yet again) goes shopping in the Argentinian food shop next door to the house in which I was staying. How is that for a claim to fame!? (2/10 - Ed).

We arrived in town seven hours prior to kick off. I met up with my pal Alberto and his family from Mallorca. Alberto has a Real Mallorca season ticket but actually supports Barca. The last time I was at his abode he sat through a family meal with an earpiece in, listening to a Barcelona game on the radio. Obviously, we get on famously. 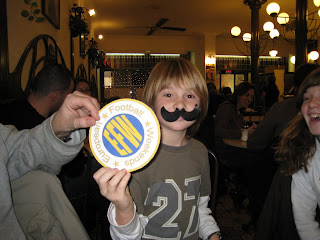 Alberto's son Carlos gets into the EFW spirit.

We walked up and down the La Rambla, sunk a few beers in the Barrio Gotico district and then Alberto and I waved our white flags and headed off to the match two hours early, leaving our families in town to buy hamsters etc. 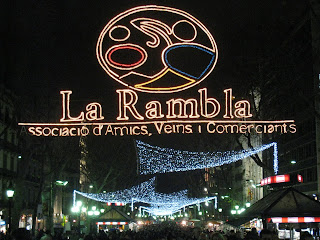 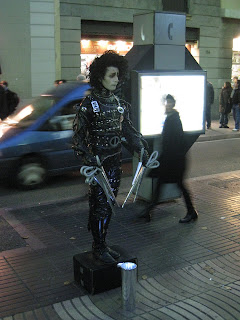 It's 'Money for old scissors' in La Rambla.

We had to meet up with Alberto's brother-in-law (Carlos) and his mates outside the ground. Thankfully, it was decided that the pub was the way forwards. There are lots of different ways to approach the Camp Nou but we opted for Les Corts metro station and then headed to the Les Corts Cervecera (bar) to sink some more bevingtons and talk football/nonsense. 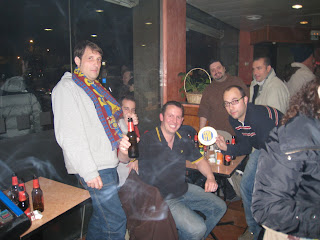 Alberto and I in Les Corts with my new mates: Carlos, Jordi, Vincec and Carlets.

They've rarely had it so good at the Camp Nou. Barca are umpty thrumpty points clear in La Liga and they keep beating teams by cricket scores. A fortnight earlier in the same stadium, arch rivals Real Madrid left chuffed with the fact they'd only lost two nil and chants of "Madrid, cabron, saluda al campeon!" (Madrid, you bastards, bow down before the champions!) rang out towards the end of the match.

Real Mallorca on the other hand are in complete turmoil. The clubs owners are in the construction business which has (obviously) gone tits up and they are in debt, have sold all their best players and earlier this season went through three Presidents in four days. This was going to be a massacre. 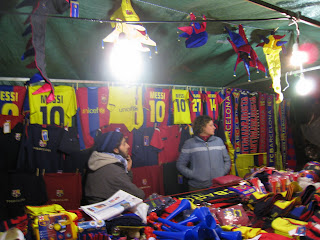 On the approach to the ground the home fans were marvelling in the fact that they are currently the best team in Europe. There were cats kissing dogs and gangs of youths helping old ladies cross the road. Our match tickets cost €34 which in English money is about £34 - I did that in my head. For that we got a seat two rows from the front in the third tier. Tickets are always (aside from Real Madrid) available outside the stadium on the day of the game. For this match only(!) 60,000 fans bothered turning up which was 38,000 below capacity.

From the outside the ground is actually quite an ugly mass of grey concrete. The club plan to address this and have signed up Sir Norman Foster no less to oversea the complete modernisation of the Camp Nou. It certainly needs it. Inside, it's hard not to be impressed by the shear size of everything but I don't know, give me a smaller ground with a bit of terracing and some proper atmosphere anytime. Maybe they need to sell beer inside to get the crowd going!? Currently they only sell non-alcoholic stuff in the concourses. 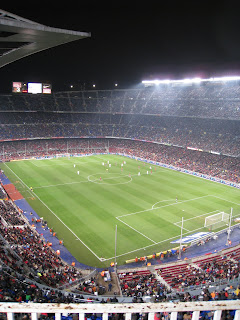 I asked Carlos why the atmosphere and the tifo display against Real Madrid was so poor for the previous home match. "Because it was raining" he said. Catalan people hate the rain. Attendences at the Camp Nou can vary from 20,000 to 98,000 depending on the weather and the opponents.
Astonishingly, in the 15th minute Real Mallorca took the lead. Time stood still as Aduriz broke through and lofted the ball over Valdez. This wasn't in the script and nobody had a Johnathan Ross what was going on. Alberto and I, out of shock more than anything else got up and celebrated. Nobody took any notice of us. There weren't any Real Mallorca fans in the ground so we had to do something. 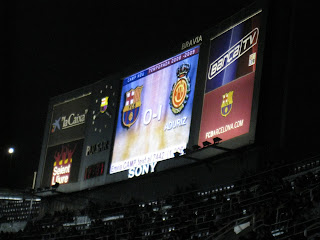 Thierry Henry restored parity by equalising in the 31st minute, sweeping in a left foot effort before becoming one of a splendid 13 players to get booked. The game then laboured a bit as we all waited for the inevitable Barca onslaught. It didn't come for ages so Barca decided to bring Iniesta off the bench. He had an immediate impact and scored almost straight away with a goal so offside he was (almost) too embarrassed to celebrate. Then Toure provided us with a bit of class adding a third just after Josemi had been sent off. 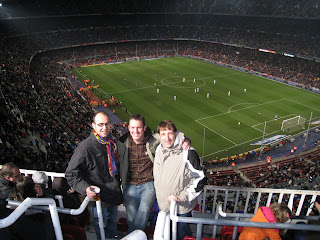 Carlos, myself and Alberto.
Personally, I don't think it can be all that enjoyable supporting a great club. Barca fans can only get themselves up for Real Madrid and maybe two Champions League games a season. Beating Real Mallorca doesn't register much on the excitement richter scale. So here is a fact for you; supporting the best team in Europe is boring! As a consequence there was no atmosphere in the ground at all.

In saying that, there was some noise being made by those horrendous hooters. Those deplorable pieces of plastic have no place inside a football ground or anywhere in society at all. I have written a letter to the Spanish FA demanding Barca be deducted points as a result of those hooters. I shall keep you abreast. 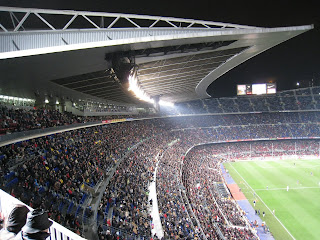 After the match we headed back to Castelldefels until 5am. We ended up in some sort of illegal drinking den. Alberto and I somehow managed to beat all the locals and the landlord at darts, winning free beers for the most of the night in the process.

Whilst talking our usual nonsense, we decided that the surrounding streets outside the Camp Nou lack any sort of real supporters bars. As such we are going to create 'Bar Barca'. Our pub will be bedecked with scarves, memorabilia and have a photo of Steve Archibald above the fire place. Barca attract thousands of tourists to their ground every week. Who wouldn't want to have a beer in Bar Barca!? This time next year......... 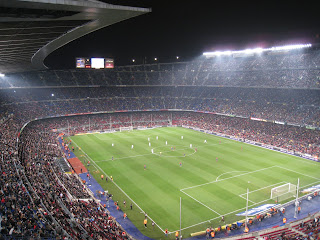 Went to Barca a couple of years ago. Stadium was full of tourists (like me), and was huge and soulless. Much the same as Real Madrid. By far the best ground I've been to in Spain is Valencia's Mestalla.