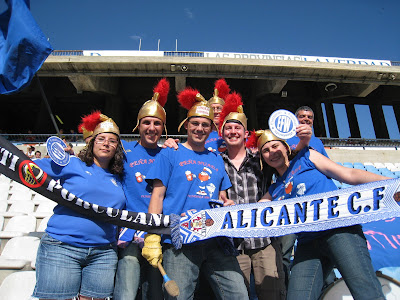 - click onto photos to enlarge image -
Getting up to a bit of harmless mischief in football stadiums is actually written on my curriculum vitae. So with that in mind - on the morning of this 'El Clasico' derby - I thought I'd take a stroll up to the Jose Rico Perez Stadium and play to my strengths.

Regular readers of these pages may be aware of an occasional little (traditional) EFW pastime we like to call 'Let's see if we can get on the pitch'. I made my way to the players entrance, as you do, flashed my EFW business card to the two - it has to be said, fairly laid back - security chaps and, trying not to look overly surprised, I was waved in past a small gathering of autograph hunters. So far so good.

In through a couple of doors, I was met by the sight of a chap in a smart Hercules suit sitting behind a desk. So thinking quickly, I put my GSCE Spanish to semi-good usage and came out with the line 'Soy un periodista Ingles, estoy aqui para recojer mi pase de prensa' (I'm an English journalist and I'm here to pick up my press pass). He explained very amicably that as this match was 'technically speaking' an away game for Hercules (the two clubs currently share the same stadium), I'd have to take my request to the Alicante CF offices that weren't yet open.

Handshakes over with, I turned back and 'accidentally' *I'm nodding and winking to you here* went through a wrong door, and blow me if said door didn't lead me right out onto the pitch. Silly old me!

Luckily, the Alicante groundsman wasn't too bothered to see me loose in the ground. He happily took a break from marking out the white lines and obliged in snapping me on his pride and joy, namely the pitch. Job done. 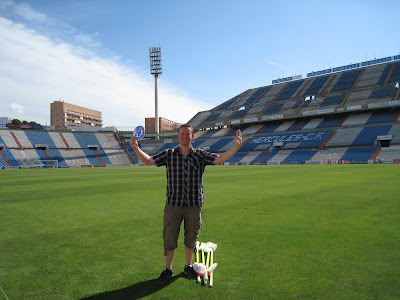 EFW operation 'on the pitch' a success (again!) The four corner flags also wanted in on the photo. 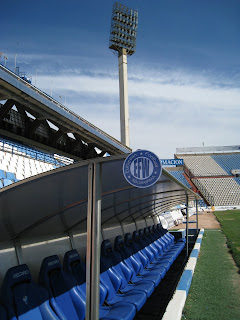 Just for good measure, I popped a logo on the Alicante bench as well. 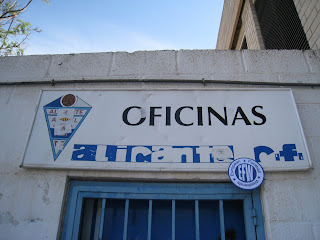 The Alicante 'Oficinas' also looked like they need a bit of colour as well, so I stuck one there as well. 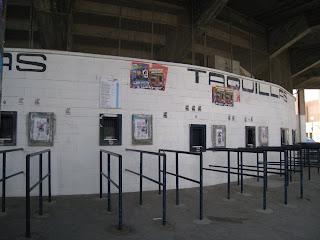 The queue for tickets at this stage was hardly snaking itself round the block so I picked up a couple for the wife and I for 15 Euros a pop. 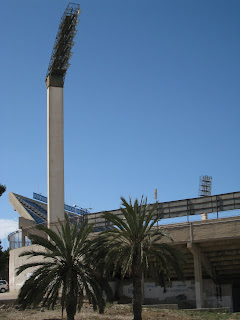 Palm trees and tremendous floodlights. What's not to like!?


So with a spring very much in my step, I headed back into town to meet the wife and bore her with the details whilst we fanned out over the City doing some touristy gubbins. Let's have a show of hands here, who fancies hearing all about Alicante's Santa Barbara Castle, El Barrio, San Nicholas Cathedral and the Rambla de Méndez Nuñez or who wants to cut straight to the pre match beers!? 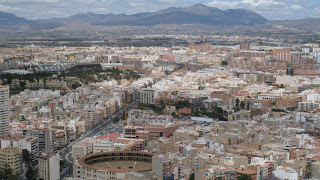 The view from the top of the castle. The bull ring is in the forefront and about half way up on the left "Oh yes, so you can darling, I hadn't noticed" you can see the ground. Yeeeees!
Actually, joking aside, an angry email did flood into the EFW office a few weeks back from a chap in Bucharest, Romania. Mr Grumpypants (we'll just call him that for now) was furious that I seem to mention beer far too often on this site. So if you are reading this in Romania old chap, skip the next couple of paragraphs will you, Mult'umesc foarte mult.

So after a couple of beers on the waterfront, we headed to La Matanza Castellana (specialists in tapas and meat) and started to chat with a few locals. Sadly, the talk in the bar wasn't of the 'El Clasico' about to take place up the road but of Real Madrid and Kaka. Everybody was friendly enough though. 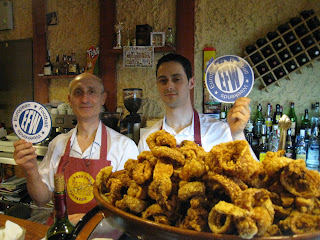 Here's Javier and Daniel our new mates from behind the bar... 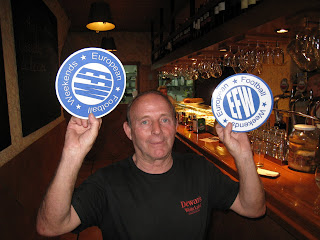 ...and as soon as he heard football being mentioned, over came this chap 'Koki' who according to some (himself) is a famous fan of Atletico Madrid.
Hercules had attracted 19,500 fans to their previous home game and with this being a derby, I'd assumed it was going to be pretty much Bobs Full House. However, there was a dispute between their fans and Alicante in the run up to the match. Hercules season ticket holders were unhappy at having to pay 'additional money' to watch a match in their own stadium. Alicante decided to charge them 10 Euro each but frankly they weren't having it. They decided, in the main, to boycott the match.

Between you and I, it doesn't take much for a Spanish fan to decide not to go to a match. A bit of rain, 10 Euro, something on telly. They will happily travel for hours to find the perfect piece of cordero (lamb) but when it comes to traveling any distance for a football match, most of them simply can't be bothered. I'm not having a pop of course, it's just a different culture and I respect that. There are exceptions of course. Cinco Estrellas (Five Stars) to the 2,000 Sporting Gijon fans who've travelled to every away game this season in La Liga.

So evidently this was set to be 'Un clasico sin demasiado tiron' as the local paper put it (A 'clasico' without much draw/appeal). It didn't help that Hercules had goosed up their previous two matches with two hugely disappointing 0-0 draws. They were in 4th spot, one place off automatic promotion and have been battling it out with Tenerife and Real Zaragoza to join leaders Xerez in La Liga next season.

The one pub we thought we might find a bit of passion in was 'Tony's Bar' next to the stadium. This place is home to many of the infamous 'Herculigans' (there is probably some You Tube footage of them somewhere), let's call them the more 'vociferous' fans of Hercules. Sure enough this place was full of them. So my wife and I joined them. Nobody was drinking beer, they were all on 'cubatas' (spirts). Whiskey isn't my normal pre-match tipple but I didn't want to upset anyone so we joined them as they sung their songs, most of which included 'hijo de puta' (son of a bitch). 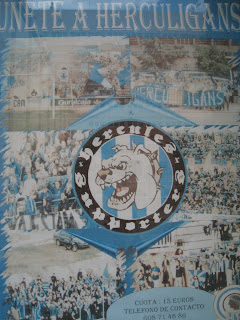 The poster on the door of 'Tonys'. 15 Euro to join the Herculigans. 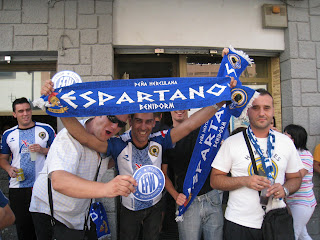 Inside the ground, it was clear the boycott had taken it's toll. Only 6,000 fans had turned up which was a bit sad really. Those that did turn up made a noise though. In the interests of EFW fairness we spent the first half with the Hercules fans and then joined our friends from Alicante in the second. Danny Dyer would have loved that eh!?

The first half was lacked any thrills, spills and bellyaches. The second was much better. The curse of EFW struck Alicante within four minutes of us joining their fans. Hercules No.14 Aguilar launched a fairly ambitious attempt with his right boot from 14 yards out which screamed into the corner. 0-1 to the 'visitors'. Then in (most fans favourite) the 69th minute, Alicante's goalkeeper Pina - who was sporting very fetching over the knee stockings I might add - made a schoolboy error by letting in a near post header from Ruben Navarro following a corner. Pina sat head in hands for a good few minutes after that. Bob Wilson would have had kittens.

It was roasting at the game (hotter than the Hills of San Salvador, I reckoned). At times the Herculigans just sang 'Cules' instead of 'Hercules'. It was far too hot for three syllables.

Then in the 84th minute it all happened. For most of the match the two sets of fans had been mercilessly taunting each other. Hercules fans sung 'A Segunda B' (you're off to Div 3) which was in fact true as they'd been relegated, whereas the Alicante faithful had been singing 'Zaragoza' all match. Their match was being played simultaneously and news was filtering through of their progress all afternoon. Anyway, in the 84th minute (finally - Ed) the Hercules fans exploded with joy as they thought Salamanca (Real Zaragoza's opponents) had scored. Twenty seconds later the Alicante fans were doing cartwheels as it matured that Zaragoza had actually scored and then, 10 seconds after that Alicante's Cristian actually popped in a goal to add to the frenzy. It was brilliant. The best moment of Alicante's season by a country mile.

After the game there was a bit of banter between the two sets of fans but nothing more sinister than that and that is how a derby should be. My wife and I headed back into town and helped ourselves to a fantastic black rice paella with baby cuttlefish, washed down (don't look in Romania) with a bottle of Marques de Alicante. Alicante is a great City with really friendly people to boot. I'm sure we'll meet again some sunny day. Adios. 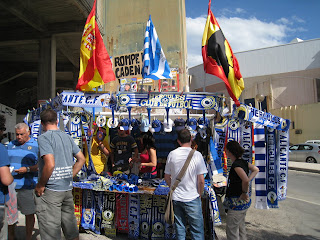 No official club shop that I noticed anyway. This was as good as it got. 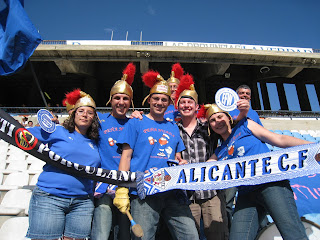 I join the Alicante CF fans who gave me splendid hat. 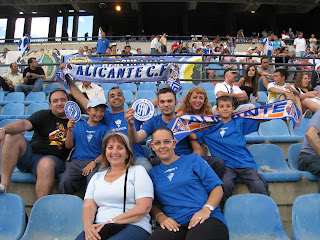 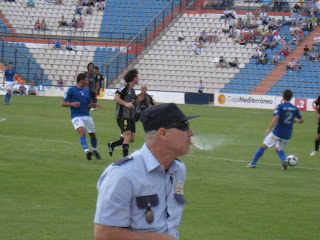 All a bit of a drag for the local police. Click on this photo, it's brilliant (self praise - Ed). 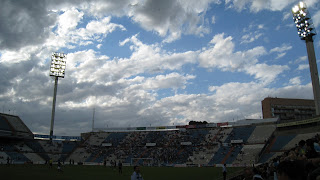 Bit moody this one. 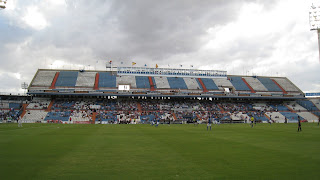 No need for a roof in Alicante. It's always as hot as. 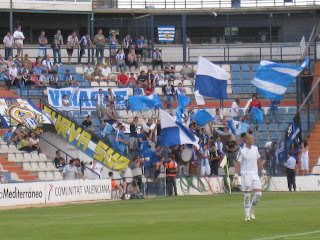 Pina gets a bit of stick for his near post mishap. 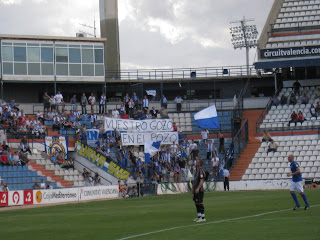 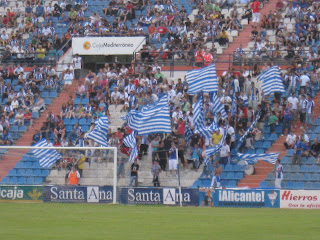 The Herculigans who we'd been drinking with before the game. 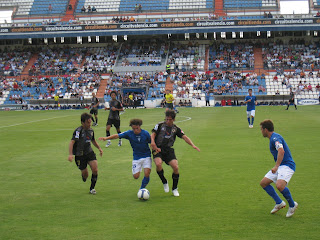 A bit of the old action. 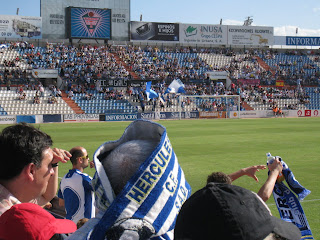 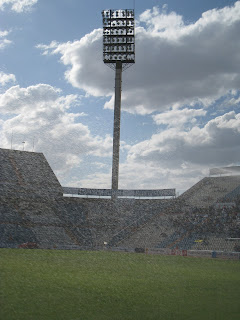 Water-bout those floodlights then. Boom Boom. 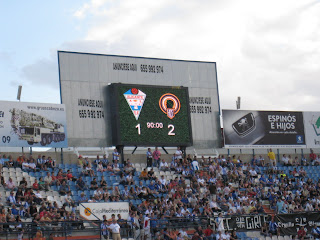 Great article, thanks so for this, I am planning to see this gound on my holidays in three weeks time.

No problem Bas, glad to be of (public) service!

I've just had a look at your website. Very good as well mate.