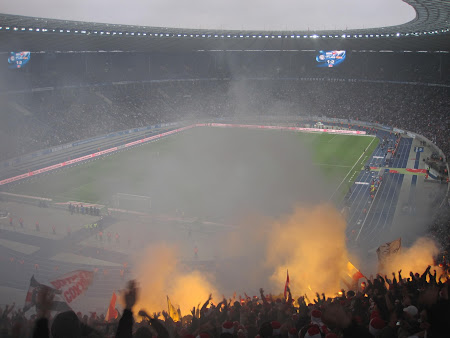 Union City Blues
Hertha Berlin 1-2 FC Union Berlin (05:02:11)
74,244 fans; two teams; one city. In terms of football matches, those ingredients are normally a recipe for hatred and evil. But this was meant to be different. I was told that here, fans would stand, drink and sing together, apparently. This was going to be the biggest party in these parts since man of peace, David 'The Hoff' Hasselhoff stopped talking to a car, stood atop a party-demolished wall and belted out a note perfect rendition of Looking For Freedom to several hundred thousand people. Welcome to the Berlin derby.

After getting up at silly o'clock (hello to you 4am), and taking the short flight to Germany, Big Deaks and I met up with my Qatar Hero, the mighty Stoffers, Abby, some Polish lads, and Damon from the Real FA Cup. Our pre-arranged meeting place was also the venue for the majority of FC Union fans to gather before the match. The first fire cracker was let off just after 10am at the Alexanderplatz Station. That woke us up.

Our €16 match ticket was good for all public transport in Berlin from the moment we landed until the time we called it a day on the post match beers - twelve hours after the game. That is the way to do it.

The trains were obviously packed, but we squeezed on one and pitched up at a pub next to the stadium. At the bar and getting in a round of beers was none other than, self proclaimed red-headed "sexual icon" Mick Hucknall from Simply Red. Buying some Berliner Kindl Mick? I thought money was too tight to mention. He certainly wasn't holding back the beers. 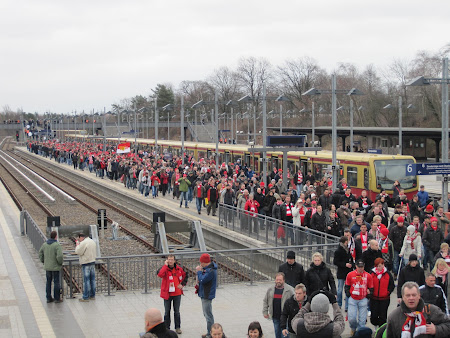 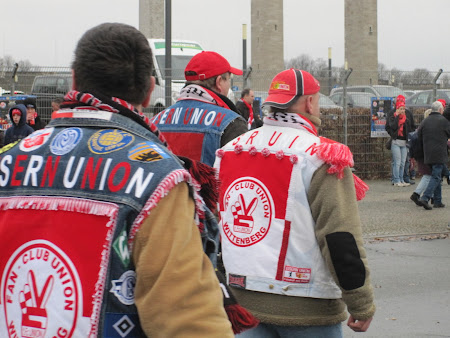 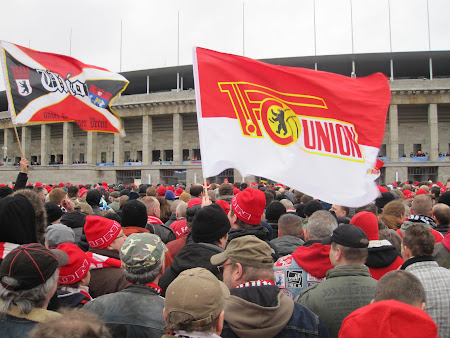 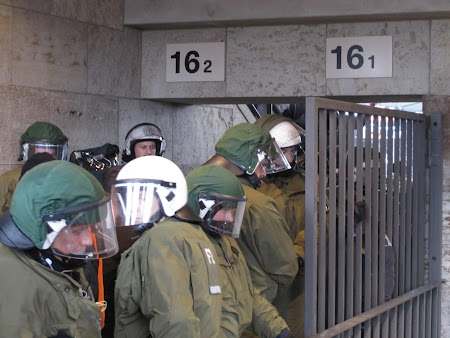 Fancy dress was the order of the day for the police.

German efficiency wasn't perhaps quite what it should have been in and around the Olympic Stadium. There was just seven turnstiles to cope with 20,000 (20,000!) away fans and the queues were enormous. Once inside, you had to negotiate your way past a corridor full of riot police dressed up as stormtroopers and then try and find your seat. Easier said that done that. All the ultras had pushed their way down to the front and the gangways were jam-packed with fans. The only access out was via an 8 foot drop over a wall. Good job I hadn't downed as many pre-match beers as Hucknall. Any sort of visit to the latrines was virtually impossible.

We sighed when Hertha took the lead with the helping foot of Christian Stuff who bodged an attempted clearance straight into the path of Andre Mijatovic. He then chipped an inch perfect pass to Roman Hubnick who nodded Die Alte Dame (The Old Lady) into the lead with his noggin. It looked at that stage that Hertha were going to run riot and notch up a routine victory.

Against all logic and reason, FC Union then turned the game on its head providing plenty of fight and spunk. First to rip up the form book was John Jairo Mosquera who controlled the ball with his arm (whoops) before lashing an unstoppable volley in the top corner. The Union fans celebrated by letting off a whole bunch of flares. This is what I'd come to see. Granted, I had to cuddle about six different strangers in the stands during the celebration, but the place was absolutely rocking. Fan-favourite Torsten Mattuschka's scored the winner with a  wicked free kicked that bounced over the keeper. Scenes of unbridled joy filled our end of the stadium. The ultras used a seasons worth of flares in one game. They probably hadn't banked on using more than one, but this was worth it. 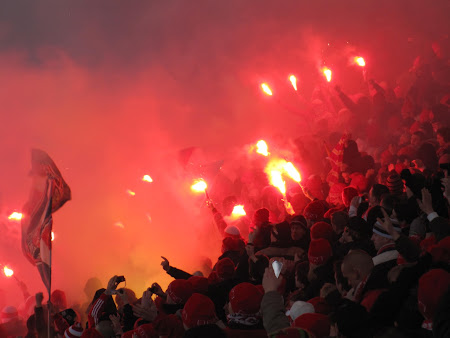 What's the time? It's flares o'clock. 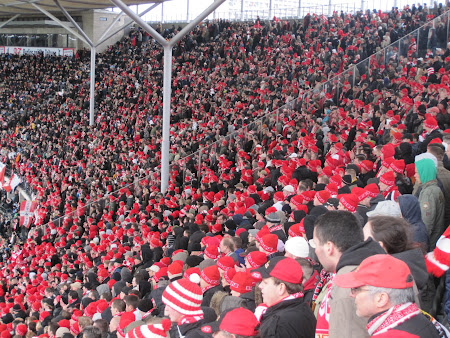 Hats the way to do it. 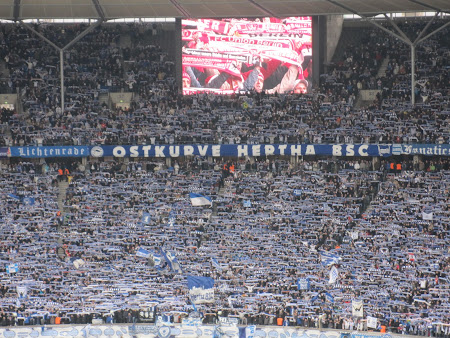 Union City Blues.
In my experience, they couldn't give a rats arse about anything in German football grounds aside from singing their hearts out and necking as much beer as is humanly possible. And that's just the stewards. Not today though. Normally, they sell Carlsberg inside the Olympic Stadium - not the bland, watery UK stuff, but the proper Danish version - in handy litre mugs. For this game, all that was on offer was non-alcoholic beer. Probably a good job. The match kicked off at 1pm and there was an eleven hour pub crawl around the Eastern parts of Prenzlauer Berg and Friedridchshain on our agenda for the evening.

There was no trouble at the match. At one stage the Hertha ultras produced a banner declaring "Football culture takes its path. Your cult is for sale as well" to annoy the Union fans, but it didn't work. It was a reply to Union's train tifo in the previous derby between these two. Union remains one of the most non-commercial, old fashioned and authentic clubs in Europe though, so they just laughed off Hertha's banner and carried on celebrating. 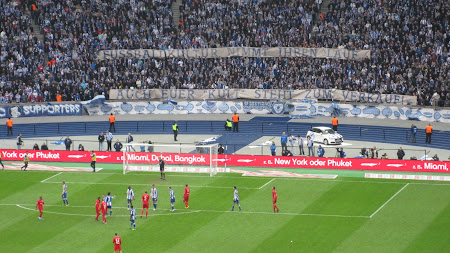 For sale: Your cult. 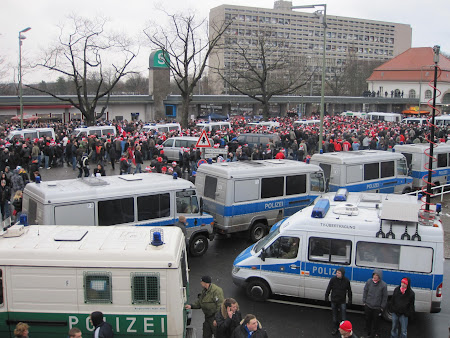 The game passed off peacefully and the 3248 police riot vans probably weren't required.
This match had the feel of an old Merseyside derby - before that particular game became a bit sinister. Fans did sit side-by-side, and without a hint of any animosity. Fans of both sides partied long and hard after the game. Next weekend, Union's Under 23 side play against Dynamo Berlin. That's a full on rivalry and predictions of trouble at that match are very real. This may be first and last time Hertha take on Union during a regular season as their paths aren't likely to cross again with the Blue-Whites set for promotion. I'm glad I was there though. There was some talk of the match being a fix afterwards. Absolute nonsense. Nobody will forget the score though. Not least because 24 hours later, "FCU 1-2" graffiti was already popping up all over Berlin. There is power in the Union. Prost! 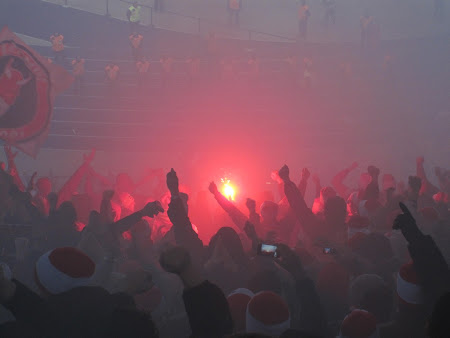 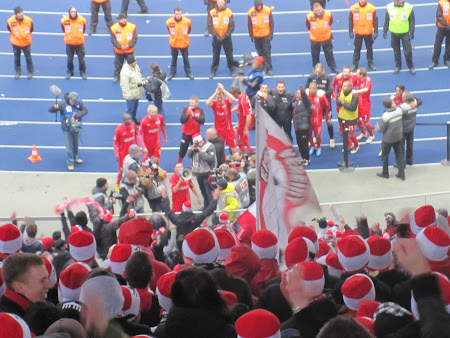 The players didn't want to leave. They milked the celebrations for about 30 minutes. And. Why. Not.
For lots more photos from the day CLICK ME.

Great article. Football as it should be.

I think, it was not Christian Stuff, but Dominic Peitz who lost the ball to Mijatovic before the 1:0 ;)

Nevertheless, thank you for this great article.

Greetings from the red and white Berlin :)

great article!
but it wasn't Christian Stuff who played the ball to Mijatovic ;)

as always! great one danny! second top choice from being there!

Of course it was Peitz and not Stuff who messed up for Hertha's opening goal. Sorry about that. My brain has probably been addled by the post match celebration beers!

That was why Peitz was so keen to grab the microphone to sing to the fans after the match. It all makes sense now.

Here's another report from the excellent Jacob Sweetman (Exberliner) who was also at the match:

There is also a nice video here of the flares in the Union section after the goal went in:

Fans of Eisern - if you're reading this after being sent via the FCU Facebook page, welcome to European Football Weekends my friends! Feel free to post links to your videos and photos.

A pleasure to read. Made my day. And as being an Editor I rather read a lot.

it was so a amazing game. Nevertheless, thank you all to joining us.
watch this video and see/listen that great atmosphere.
http://www.youtube.com/watch?v=VEyEUM_PlBU

@Bunkinho - Too kind my friend.

@Anon - Great video that. Cheers! So many good memories....

Really enjoyed the article, even though the result wasn't so good.

@Anon - Thanks for that. And just to show there is no hard feelings towards Hertha. Have some of this my friend:

"Next weekend, Union's Under 23 side play against Dynamo Berlin. That's a full on rivalry and predictions of trouble at that match are very real."

UPDATE: A week later that Union side did indeed beat the once-evil Stasi-backed Berliner FC Dynamo 0-1 at the Jahnstadion in the north of the city centre. But there was no trouble :) People on the ground believe this was due to the fact that the game was scheduled at exactly the same time the Union first team played at home, so all the hardcore fans went there instead.

"Nobody will forget the score though. Not least because 24 hours later, 'FCU 1-2' graffiti was already popping up all over Berlin."

We spotted this near the Jahnstadion about a week later, miles away from the FC Union heartland ;)

D'oh! Above pic only visible to me Facebook friends :S Here it is on flikr ;)