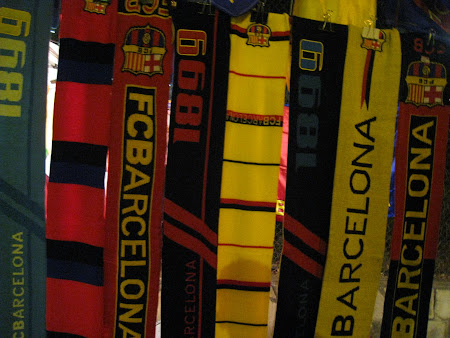 Tom, Chris, Jamie, Ben, Andy Barcelona. And Lyon.
A minor crisis at EFW Towers this week. After penning part one of this epic two-part series whereby five lads set out to conquer Europe in a car named Beyonce, or was it Emile? Anyway, Jamie Cutteridge was lured away by a multi-pound deal with Jonathan Wilson's new production The Blizzard (everybody is talking about it).
Fear not fans of National Lampoon's European Vacation-esque shenanigans, with a football twist, for riding through the crowd in a knight of shining armor to continue the story is brilliant young sports writer Tom Goulding.....
So that was Zaragoza 0-1 Atletico Madrid.
The Eurotrip group leader Jamie Cutteridge, assistant-to-the-leader Ben, Andy, Chris ‘Equaliser’ Mann and I regrouped on Sunday morning in our Barcelona hostel, before heading into the city centre with an afternoon to kill before Barcelona vs Athletic in the evening. 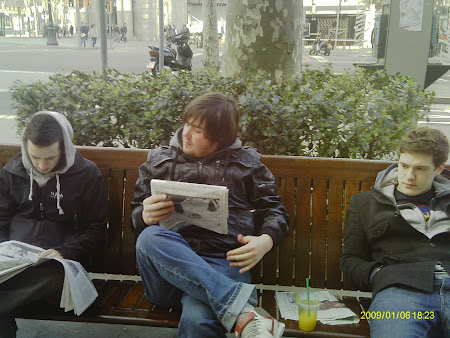 A strange lack of Catalan coverage on the previous night’s win for Real Madrid
The group enjoyed a leisurely walk down Las Ramblas and around the pier, with our minds firmly on what sort of Barcelona we were about to see that evening – would it be the lukewarm, defensively porous Barcelona of the Emirates, or the overwhelming Blaugrana of the November Clasico and of countless other matches over the past few years? 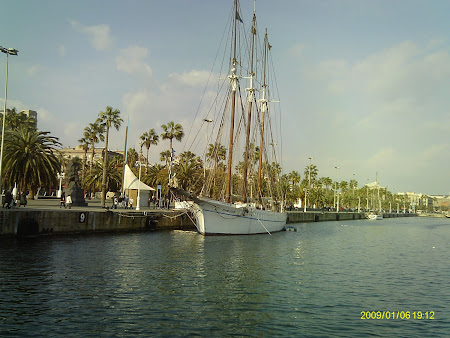 Were we in Orange County?
Overpriced tapas, a cool breeze, a Catalan sunset, a game of categories of players to have scored volleys at Turf Moor – the time soon passed until we needed to get the metro to the stadium.
Approaching the ground in the short walk from the metro station, we witnessed the countless bars and cafes overflowing with Blaugrana and the rojiblanco of the Athletic fans, all jovily enjoying drinks and sharing stories with each other. A far cry from the Green Street pubs I didn’t enjoy last September. We turned down the offers of countless street stalls, who were selling the all too common Spanish snack combination of bread-meat-bread, and we went our separate ways into the stadium early doors.
FC Barcelona 2-1 Athletic Bilbao (20:02:11)
Chris and I were sat up high in the top tier of the stadium, right behind the goal of the Lampard end of Camp Nou. As the countless fellow plastics with their shiny new replica kits filled the majestic beast of a stadium, we were transfixed by the casual chest control and 40-yard volley drill Lionel Messi and Daniel Alves were doing with each other. Minutes went by without the ball touching the ground. “Bale could do that to himself” I said to Chris.
The noise I could hear was the brave singing of the couple of hundred Basque travelling fans to our right, interjected occasionally by the hooter being honked by the teenage Barca fan in the row behind, which is the most annoying noise in the world™. His attempts to impress his girlfriend with the amplitude of his horn was not going to interfere with my appreciation of the Barca anthem as the players marched out onto the pitch. “Barça, Barça, Baaarça!” I half expected the final player Sergio Busquets to march out dressed as a nervous high school marching band girl playing the trumpet. He didn’t, and we got on with the match. Athletic would have won if they had gone 4-4-2
Villa turned in an Alves cross (“Offside!” cried Marca) on 3 minutes to make it 1-0 to the home side, and we wondered whether this was to be a contest at all. But Barcelona’s commendable commitment to never shoot meant that for all their possession, the half-time score remained 1-0.

As the hot dog queue took me into the first five minutes of the second half, I heard wails from the stands and rushed back into my seat to see Athletic with a penalty right below me after Busquets had tripped Llorente. Without time to ask the Catalans next to me if Busquets had not raised his arms to cancel the foul, Atheltic’s Andoni Iraola tucked away the penalty past Pinto, and a small voice inside me (not literally) was shouting the name of the Basque left-back, in wild celebrations at the sight of the underdog upsetting the all-conquering behemoth at their own ground, something I have longed for so many times over the years watching the Premier League. 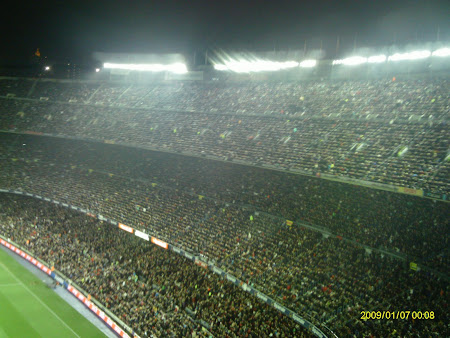 Where were you when you were shit?
However, I eventually sat back and marvelled at the spectacle I knew I would not often witness. Thousands reached for their white handkerchiefs as Messi was shoved off the ball in the area but a penalty was, incredibly, not forthcoming. Iniesta twisted and turned, weaved in and out, tying up Athletic players in their own logic. His opponents could only manage to cry out in angst at the failure of their own defensive paradigm in the face of such magic. Messi, quiet by his standards (Lazy.), accelerated into the space but he was denied. They all were being denied. Would they fail to pick up a win for the third time in a week? Might they even lose, at the hands of a tormenting bald, Basque substitute, Gaizka Toquero? It seemed so easy back on 3 minutes....
No, they would not fail. Messi turned in an Alves cross on 77 to clinch the match and the Camp Nou breathed a collective sigh of relief. I had seen the late home goal for the favourites crush the dreams of the plucky underdogs so often before, but like Kevin Spacey in the underrated American Airlines commercial, I had to just smile and clap. We had witnessed one of the greatest sides to have played the game we love, and we had seen them win a match.
While the rest of the group spent Monday at the Catalan F1 Track to see some testing (MOTOR SPORT IS NOT REAL SPORT), I spent the day in the city that I barely got to know in a week’s time spent there in 2007. In the gardens of the Sagrada Familia (named the ‘Salgado Familia’ by one of Chris’ twitter buddies), I mused: could anyone else even hope to achieve the elegance of Iniesta again? Who else has controlled top-level games to such an extent as Xavi does week in, week out? Do Italian BMTs taste the same abroad? 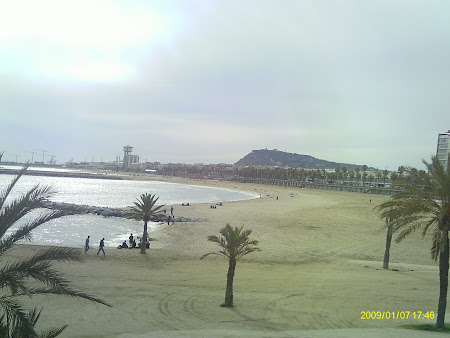 [Amusing photo caption about Barcelona beach]
Without anymore time to be pretentious, I met up with the lads to start our overnight drive to Lyon, to see Lyon vs Real Madrid the following evening in the Champions League.
Arriving in the morning, we didn’t want to suffer a repeat of Stade-Metropole-gate. After sitting in a thoroughly depressing car park for several hours playing categories (Yes, ‘sunbaked terracotta’ is a colour. Check with Dulux.) we then joined European football whore Andy Brassell for a thoroughly enjoyable drink in the centre of Lyon before the evening’s match, answering a few questions along the way. Would Lyon do as well as last year’s triumph over Los Merengues? (No.) Would Mourinho play three holding midfielders as predicted by the Lyon Morning Echo? (No.) Where can we steal free wifi from before the game? (Bar Ninkasi Gerland).
After satisfying our thirst for lash at the Bar Ninkasi, we proceeded into the stadium, walking up majestic stone steps onto raised ground as Fanfar For The Common Man all played in our respective heads.. We were tucked away in the corner of the end to the right of the camera, where away fans used to be if you have watched previous ties at the Gerland. Although we were very much in the home end, there were a number of Ronaldo fan boys with replica Madrid kits around us, who would yelp every time the Portuguese star fired a ball into the empty net in the warm-up. 200 Madrid fans (of which about 8 sung) sat across from us on the side stand, a surprisingly low number notwithstanding the absence of an away fan culture in Spain.
Olympique Lyonnais 1-1 Real Madrid (22:02:11)
The first half was a very typical Champions League first leg first half – cagey, tight, entropic. Ozil, Di Maria and Adebayor were all fairly lightweight. Ronaldo’s first touch saw him go down under the lightest of touches, and due to the precarious nature of our standing position (on flat slabs of seats), when I stepped forward to wave an imaginary card at the referee, my momentum took my down four rows and into a rather large man. 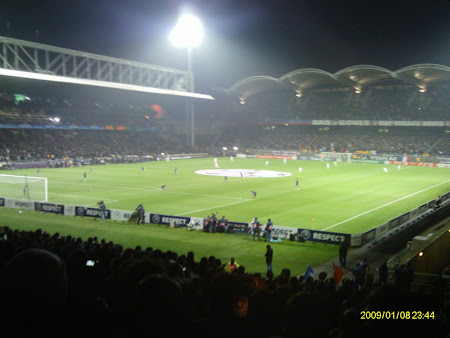 A very well-lit Stade Gerland
Real didn’t look threatening until early into the second half, and with the introduction of Karim Benzema they opened the deadlock. Until then Lyon had looked the most likely like scoring, through a strong combination of Michel Bastos and Aly Cissokho on the left. Benzema combined with Ronaldo with his first touch and bundled the ball in – disaster for Lyon, as a 0-0 would have been a fairly good result for the home side. Incredibly however, Bafetimbi Gomis, the Lyon striker, who had been doing his best Carlton Cole impression all game, found space in the box late on and guided the ball past Iker Casillas. Neither team was too disappointed with the scoreline, and the game ended.
We trudged back to Bar Ninkasi before heading back to our car for the overnight drive to Dunkirk ferry port and monotonous ol’ England. What had we learnt from the past six days? That Atletico could do it on a cold and windy night in Aragon. That the relative altitude of the city of Lyon means that it can be incredibly windy and cold.  That Barcelona has a beach. That players as good as Iniesta and Messi really do exist. That Karl Pilkington’s brother got sacked from the Army for going to the shops in a tank. And that David’s Platt mother-in-law does a really good serving of pork pies.
Goodnight everyone.
That was part 2. I dare you to CLICK ME for a look back on Part 1.
You'll be wanting to follow the lads on Twitter now I'm guessing, so click on their names to allow their wit and charm to enter into your life on a daily basis: Tom, Chris, Jamie, Ben and Andy.

Good lord. It's an Andy Brassell interview.
- Feel free to comment below -
Posted by Danny Last at 10:45

Really enjoyed that guys, sounds like you had a great time. Still bemused how you managed to not find the Stade Lille Metrpole on time, there's bugger all else in the area, least it added a little story to your tale.

Thanks Jamie and Tom, and Danny for putting it up.

How was getting tickets? Difficult? I'd love to have one of those weekends myself.

@Anon - It depends which game(s) you fancy. There is a European Football Weekends Facebook group with fans from all over Europe who help each other out with ticketing and other information. Have a look.